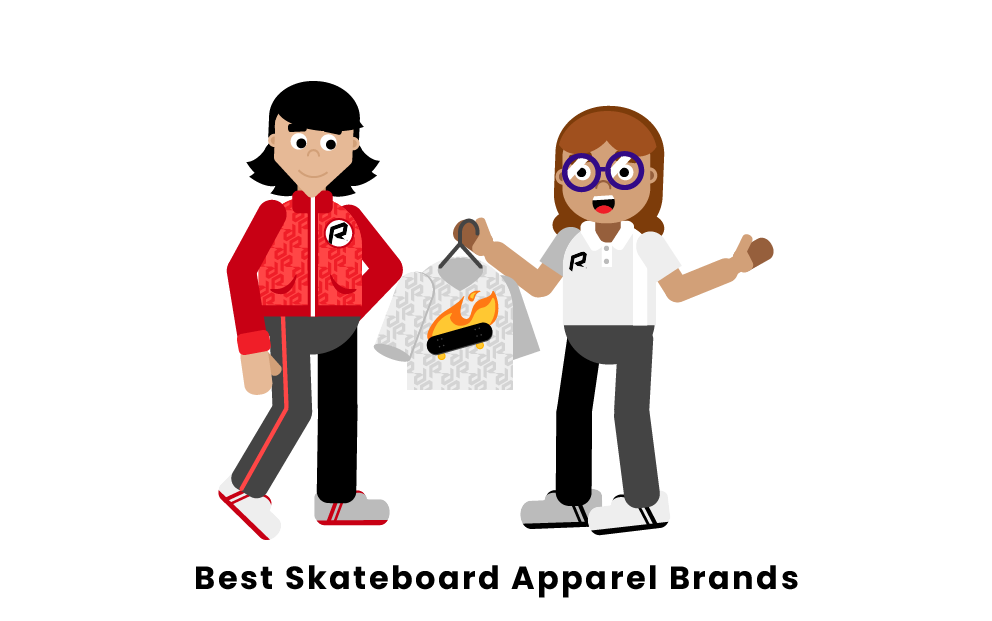 Skateboarders have never lacked style, and neither have the people who make their clothing and footwear. As skaters have evolved to find their place in both popular and underground culture, a select few brands have succeeded in channeling the voice and carefree, rebellious spirit of their customers.

What are the most popular skateboard apparel brands?

Vans is an American brand that is credited with setting the precedent for the ideal skating shoe aesthetic. It was created by brothers Paul and James Van Doren, who in the 60s opened an adjoined rubber and footwear factory for easily customizable shoes. When James Van Doren’s son took up a passion for skateboarding, he decided to pursue a footwear style that would be unique to the needs of skateboarders. Vans designed a flat-shaped deck shoe with a rubber sole uniquely capable of gripping the board, becoming an instant hit with local skaters and growing the company exponentially from the 70s onward.

Today, Vans shoes are iconic in the skating community, with their pro models being particularly favored for their comfort, flexibility, and quality. Its style and dependability have had unrivaled success in the skateboarding apparel market, having been the first-ever skating apparel company on the market ever to earn a billion dollars. Vans sponsors several professional skateboarders, most notably legendary skateboarder Tony Hawk.

Santa Cruz has been an innovative force in the market since skateboarding’s early underground days. Founded in Hawaii in the 70s, it first focused on surfboards exclusively before becoming one of the first brands ever to recognize the potential in skateboarding. Creators Richard Novak, Doug Haut, and Jay Shuirman created their first-ever skateboards in 1973. As they perfected boarding aesthetics into the late 1970s, they branched out their signature designs into apparel as well. True to its Hawaiian roots, Santa Cruz’s signature style embraces bright splashes of color and eye-catching cartoons and graphic designs. Many designs, such as the Screaming Hand or the brand’s red dot logo, are evergreen classics to the skating community.

Since its inception, Santa Cruz was a hit in skating culture, having won countless awards for skating stylization from the 80s onwards. Its promotional skate teams have been some of the best, from Jim Hutson in the 70s to the modern rising stars like Jake Wooten. Today, Santa Cruz has managed to stay true to its old-school style while still finding room for innovation and modern trends.

DC Shoes is an American footwear brand famous for its shoes in both streetwear and boardsports. It was instrumental in bringing the subversive style that defined skate culture to the mainstream, opening doors that had previously been closed. DC Shoes was founded in 1993 by young entrepreneurs Ken Block and Damon Way, who wanted to use their passion for design to elevate and unite underground cultures like skateboarders and graffiti artists, neither of whom were understood or looked favorably upon by the masses at the time.

DC Shoes, then called Droors Clothing, gave creative freedom to actual skaters and fringe artists to help authentically define the carefree, counterculture style of skateboarding in their day. It became one of the most recognizable skating brands in the world, with elite skate teams promoting their products as well as many figures in broader pop culture, such as professional skateboarder Nyjah Huston and television star and former skateboarder Rob Dyrdek.

HUF is an American skating apparel brand founded in 2002 by the late pro skater and designer Keith Hufnagel. It is credited with being one of the first pioneering brands that sought to give skating apparel its own style. Hufnagel, who grew up skateboarding in New York City, moved to the West Coast to skate professionally in the 90s. As he thrived in California, Hufnagel longed to bring the style of East Coast counterculture to his new skating scene. He and Anne Freeman, then his wife, created one of the first-ever skating sneakers stores in 2002, where HUF was born.

In the years that followed, HUF went from a modest sneakers store to a renowned pioneer of skating apparel that heavily influenced the style of the West Coast skating scene. The brand brought counterculture elements of American punk, hip-hop, and graffiti art to its clothes and sneakers. The brand name HUF had even been Hufnagel’s graffiti signature (a shortening of his surname) which was once commonly seen in the streets of New York. To this day, HUF is one of the most respected and high-quality brands dedicated to the counterculture of skating life. Notable athletes on HUF’s skating team include Tyler Bledsoe, Mason Silva, and Nick Matthews.

Palace is a London-based luxury brand that was founded in 2009 by British skater Lev Tanju. Tanju, then living in a skatehouse with his friends, created Palace out of the desire for skating gear that spoke to British culture in an otherwise Americanized sport. Tanju and his friends dreamt up streetwear inspired by the U.K.’s grunge scene of the 1990s and the young working class. They named their brand after their small, inexpensive skatehouse which Tanju called “Palace.” Its streetwear elevates familiar garbs like windbreakers and hoodies, often sporting the brand’s signature tri-ferg and references to British pop culture.

Palace found quick success on the market, spurred by world-renowned British skater Lucien Clarke adopting the brand in 2010. With a talented skate team including Clarke and others like Benny Fairfax promoting Palace, what began as a few t-shirts sold in South London stores became a phenomenon in skating culture throughout the U.K., U.S., and Japan. It would go on to win European Skate Brand of the Year and become a familiar brand both in pop culture and pro skating, collaborating with celebrities including Jonah Hill and A$AP Rocky, as well as esteemed brands like Adidas, Polo Ralph Lauren, Umbro, and many more.

Volcom is a California-based apparel company that makes clothes for all boardsports, from skating to surfing. It was founded in the early 90s after creators Tucker Hall and Richard Woolcott went on an enlightening snowboarding trip in which they discovered they wanted to make clothes that suited the carefree boardsports lifestyle.

Though they started selling t-shirts out of Hall’s apartment, their creative spirit eventually became highly demanded among skateboarders. Volcom found an engaging intersection of sports, art, music, and pop culture that gradually grew into a worldwide skating, surfing, and snowboarding apparel company from the late 90s onwards. The company’s motto, “youth against establishment,” spoke to skateboarding’s rebellion in the form of fun. Its hoodies and ski jackets are particularly popular and sought after for their quality, freshness, and fun style. Their sponsored athletes include Alec Majerus and Jamie O’Brien.