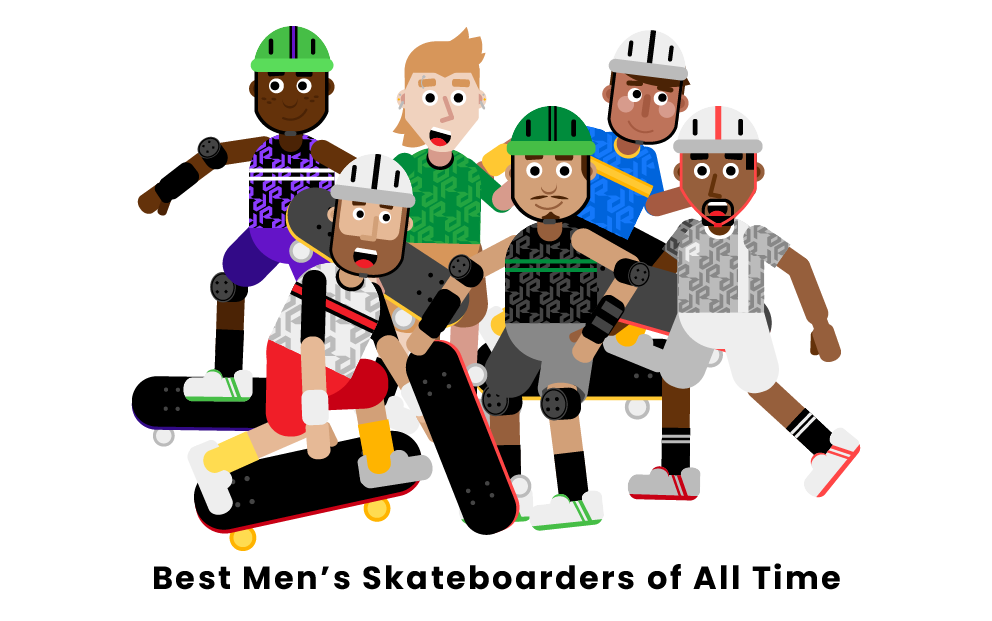 Skateboarding has always attracted some of the most talented and creative athletes in all of sports. Throughout the years, the top skateboarders in men’s skating have brought thrills, style, passion, and athleticism. Read on to learn about the best men’s skateboarders of all time.

Who are the best men’s skateboarders of all time?

Tony Hawk is perhaps the most accomplished skateboarder of all time and the most prominent influence in bringing skateboarding into pop culture. In the time since Hawk started skating professionally in 1982, he has become a decorated champion and an ambassador to the sport who’s skated everywhere from the White House to the Streetdome in Denmark. Hawk won a stunning 16 medals at the X Games, including ten gold, and became an irreplaceable presence who brought legitimacy to the event as a whole. He founded Birdhouse skating company and the hugely popular Pro Skater games, as well as the Tony Hawk Foundation, which has donated millions to make skate parks accessible in all areas.

Nicknamed the Godfather of Street Skating, Rodney Mullen’s influence on skateboarding cannot be understated. He has revolutionized freestyle skating since his early days of skating in 1970s Florida. Mullen’s unparalleled instinct for maneuvering the board led to the invention of countless popular tricks, including the ollie, the 360 flip, and the heelflip, that would forever change the sport fundamentally. He won the world title for freestyle skateboarding 34 of the 35 times he competed, a record championship run that remains unbroken to this day. In the 2000s, he created Almost Skateboards, a lucrative and renowned brand worldwide, with fellow skater Daewon Song.

Daewon Song is a California-based, South Korean-born skater renowned for his artistry and creativity in stunts. He’s known to make use of unconventional obstacles, skating on everything from rails to tree stumps with precision. He combines immaculate technical skills with a flair for the unconventional, adding unexpected twists and turns to classic tricks. Song’s skating videos were extremely popular from the 90s on, showcasing a unique and irreplaceable style. Now in his forties, Song still tests the limits of skateboarding and has millions of fans on social media. He also co-owns Almost Skateboards with friend and former rival Rodney Mullen.

Nyjah Houston is a California-born 16-time gold medalist and perhaps the most talented skateboarder currently competing in the sport. He made his extraordinary debut at just ten years old in the 2004 Volcom Damn Am, where he showed skills beyond his years and finished fourth. From there on out, he more than lived up to his stunning first impression, winning his first gold at the X Games in 2012. He currently has ten gold medals for street style in the X Games, which is the most anyone has ever earned in that category. He also won gold at the World Skateboarding Championship in 2014, 2017, 2018, and 2019.

Andrew Reynolds is known for both his finesse as a professional skateboarder and an icon to skating culture. He first skated for Tony Hawk-affiliated Birdhouse in Florida in 1995, where he became popular for his immaculate yet effortless style in tricks like the frontside flip. In 1997 he moved to California to become the founder of Baker Skateboards, where he created iconic skateboards and produced and co-starred in popular skate videos. While Reynolds excelled in the competitions he entered, he preferred making videos and designing skateboards to competing and is best known for his work with Baker. He has since gone on to become Baker’s sole owner and partner with many lucrative skating brands, including Vans in 2021.

Rob Dyrdek is a professional skateboarder, entrepreneur, and popular personality who is well known for having helped bring street skateboarding to the masses in the 90s and 2000s. He started skating professionally in 1991 at just 16 years old and gained a sponsorship from DC Shoes at 21. He made popular skating videos and had his own television shows, including Rob and Big, Rob Dyrdek’s Fantasy Factory, and Ridiculousness. He established the Street League Skateboarding international tournament series, which was one of the first to cater to street skating in particular. Dyrdek also used the money he earned from skating professionally to build skate parks, lovingly called skate plazas, across America to help young skaters without a designated, safe place to skate.

Who is the best male skateboarder of all time?

Skateboarding can be subjective in style and the sport itself has seen countless talents, but Tony Hawk is widely considered the best skateboarder of all time for a combination of unparalleled skill, style, competitiveness, and popular appeal. Still, other skateboarders bring irreplaceable value to skateboarding, such as Daewon Song for his creativity, Nyjah Houston for his competitive skills, and Rodney Mullen for his pioneering of the sport.

Which male skateboarder has won the most X Games gold medals?

Skater Bob Burnquist is a fierce competitor who holds the record for the most X Games gold medals, with 14 under his belt. He also has 30 X Games medals overall. He won his medals from 1995 to 2017, skating in all summer events in that time span. In 2014, he became the first ever skater to consecutively win gold four times. He also holds the record for the most gold by anyone at the Summer X Games.

Who was the first person to perform a 900 twist successfully?

Tony Hawk was the first documented skateboarder to ever successfully perform a 900 twist, an infamously difficult 900-degree aerial spin, at the X Games in 1999. Hawk took home the gold for best trick and won the hearts of skaters and fans worldwide that day. Hawk had begun attempting the 900 in his teens and finally landed it at 32 years old, none too soon after the 17 long years of training and injuries  that it took to perfect it.

Pages Related to Top 6 Best Men's Skateboarders of All Time