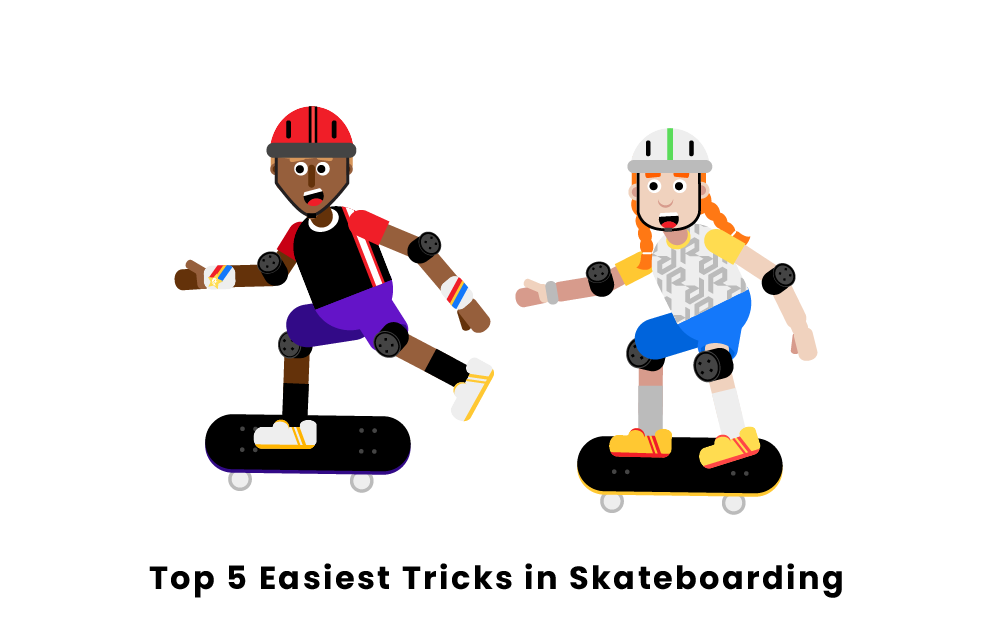 What are the easiest skateboarding tricks? 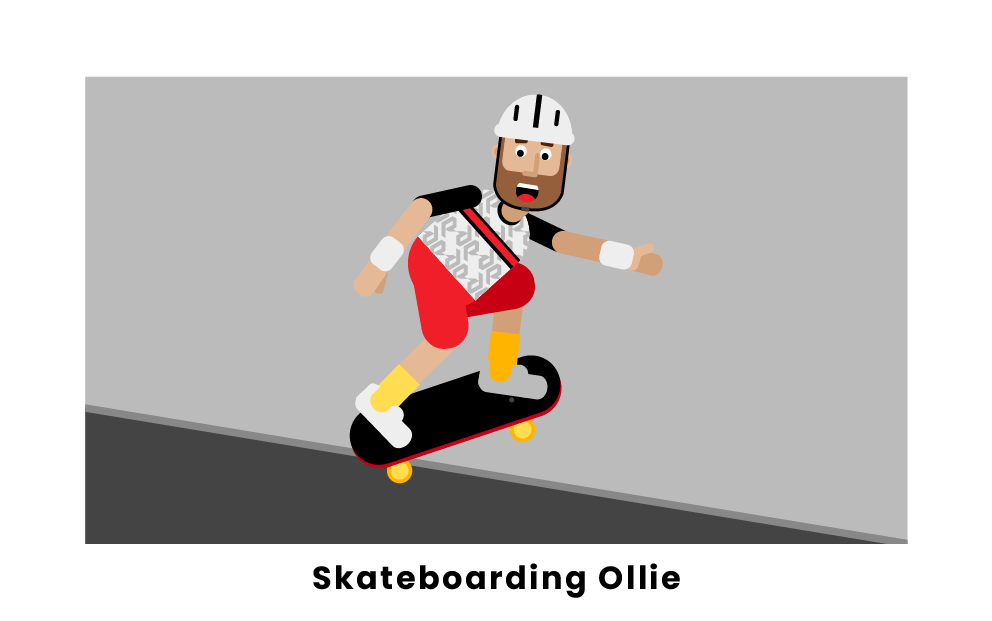 An ollie is the most basic skateboard trick that all skateboarders typically begin with. The ollie is a jumping technique used by skateboarders to lift themselves, along with the board, from the ground and into the air. To do an ollie, a skater must first push down all their weight from the board to the ground, then pop up with the board at their feet. When the board gets up in the air, the skater must move their front foot forward on the board to even out the weight. The ollie was invented in the late 70s by skater Alan “Ollie” Gelfand. It is the most versatile and widely performed trick in the world. 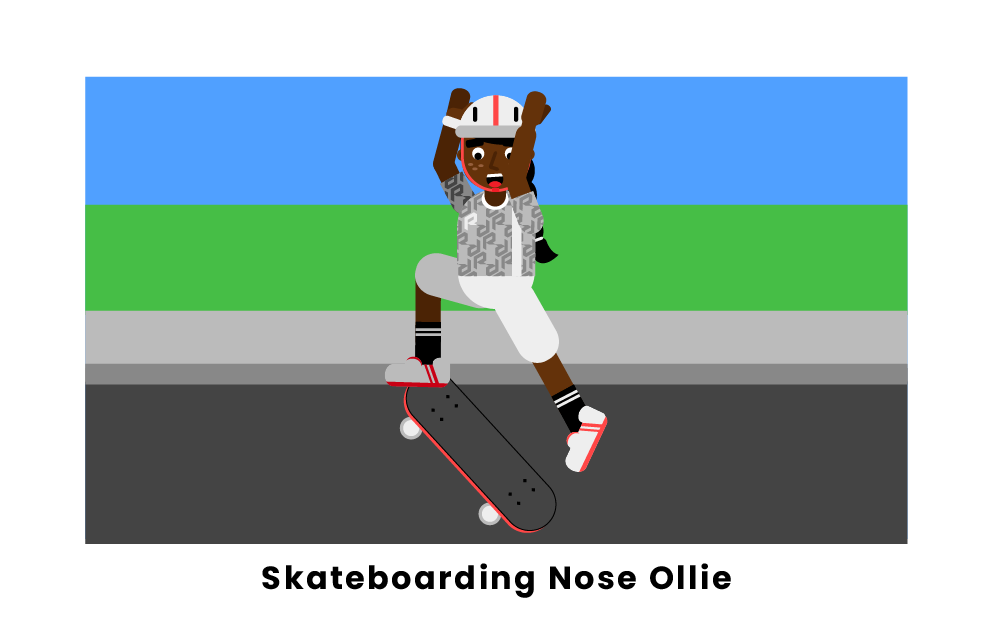 Professional skateboarder Rodney Mullen is known as the skateboarder who invented the trick. In an interview for Thrasher in April of 1983, Rodney said that the best way to start practicing for this trick is by doing front foot or reverse foot ollies. From the invention of the nollie came many incredible skateboarding tricks, including nollie flips, nose slides, and crooked grinds. 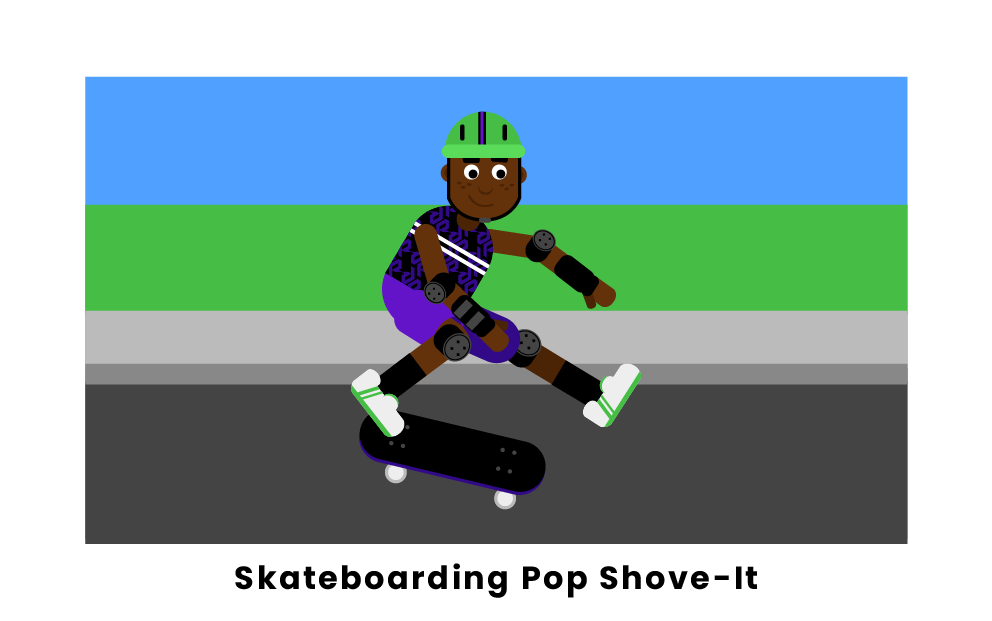 A pop shove-it is a very basic skateboarding trick that combines the motion of an ollie with a spinning skateboard. For the trick to happen, a skater must position their feet in the same position for an ollie, except the back foot should have the toes positioned a little off of the board. When the board is popped into the air, the back foot must drag the end of the board in a circular motion, causing the board to do a full 180 degree spin in the air. The front foot stays in the same position the whole time until the board has completed the rotation, which then is caught by both feet before returning back on the ground. 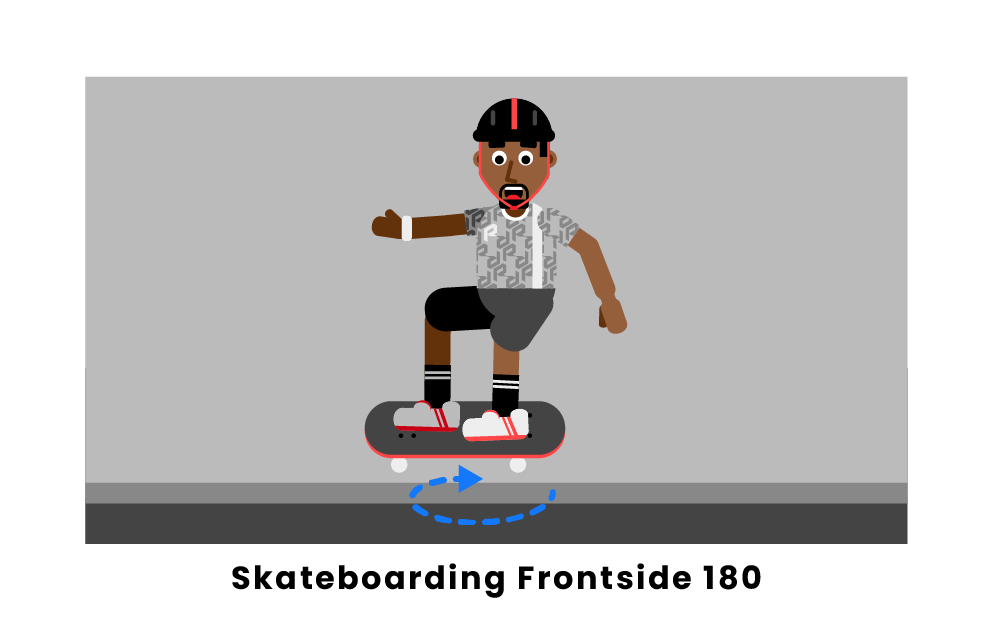 A frontside 180 is another one of the easiest tricks for beginner skateboarders to learn. The trick is similar to an ollie, except the skateboarder and the board itself will rotate together 180 degrees once popped into the air. When starting to pop the board up, the skateboarder must rotate both their head and shoulders in order to build the momentum to spin in the air. 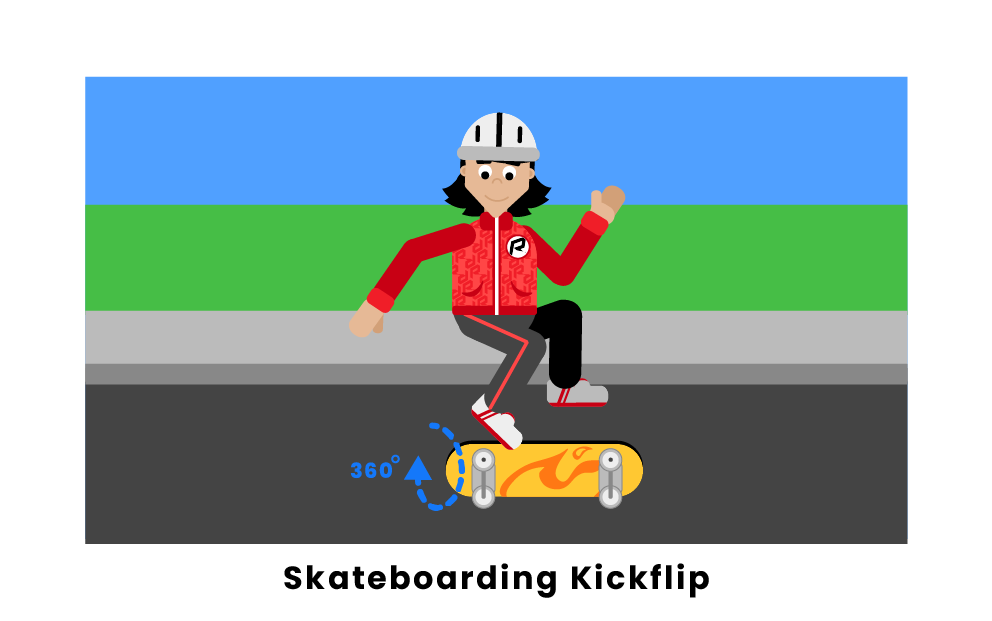 The kickflip is probably the most well-known trick in skateboarding, although it is somewhat difficult compared to an ollie or a pop shove-it. A kickflip happens when a skateboarder pops the board in the air, and then spins the board a full rotation before landing back on top of it.

Professional skateboarder Rodney Mullen is credited with inventing the kickflip. In 1982, he originally called the trick the “magic flip.” The foot positioning for this trick is similar to the foot position for an ollie, except for in a kickflip, the front foot must be dragged to the side while the board is in the air. The rider also must keep their knees high so that the board has room to rotate under their feet. 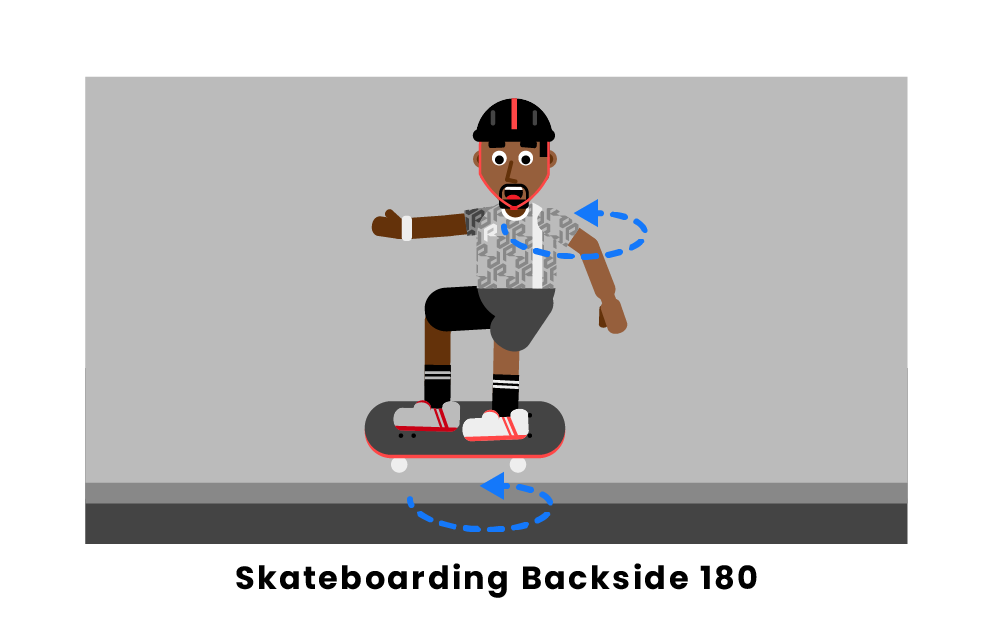 The backside 180 is a variation of the frontside 180, and is a little more challenging than the frontside version. It is primarily a dynamic trick, as it is harder to master from a stationary position. While you don’t want to be going too fast when first attempting this maneuver, you will want to have enough speed if you want to successfully perform the trick.

To start the trick, position your feet in the same position that you would have them in for an ollie. Then, you twist your shoulders in the opposite direction as you would for a frontside. You then unwind your shoulders and start the ollie. Once you have rotated 180 degrees on the ollie and landed, you have completed the trick. 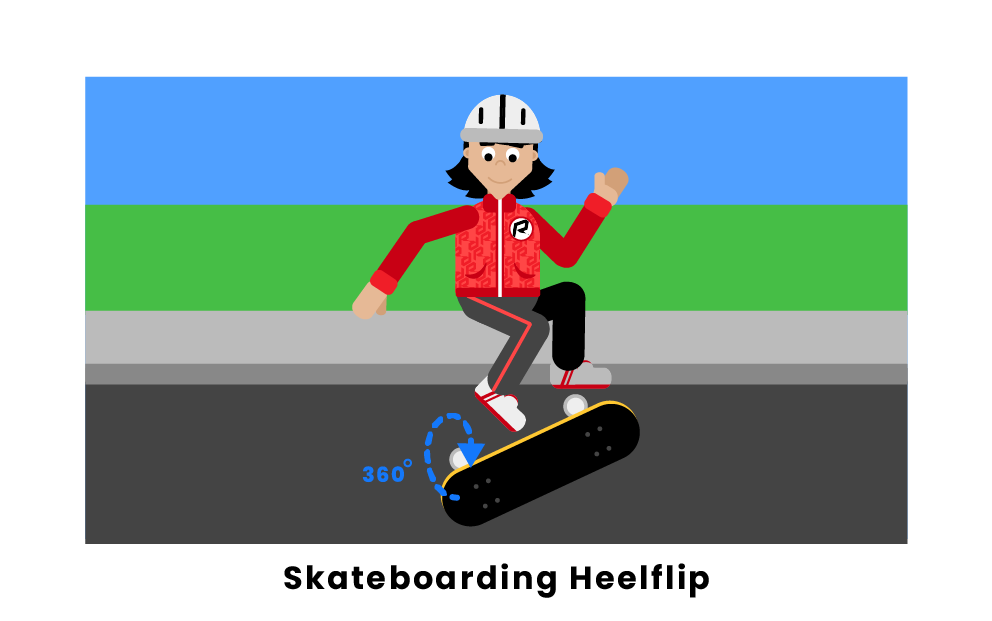 A heelflip is a variation of the kickflip in which the heel of the foot is used to rotate the board instead of the front of the foot. This trick can be done either stationary or while moving. You set up your feet in a similar position to a kickflip, with your front foot in the middle of the board and back foot heel slightly hanging off the back.

To start the trick, you get ready to ollie by shifting your weight. Once ready to jump, you slide the heel of your front foot diagonally across the board, which will rotate the board in the opposite direction as a kickflip. This dragging of the feet will cause the board to rotate in the air. You then finish the trick by landing on the board after it has done one full rotation. 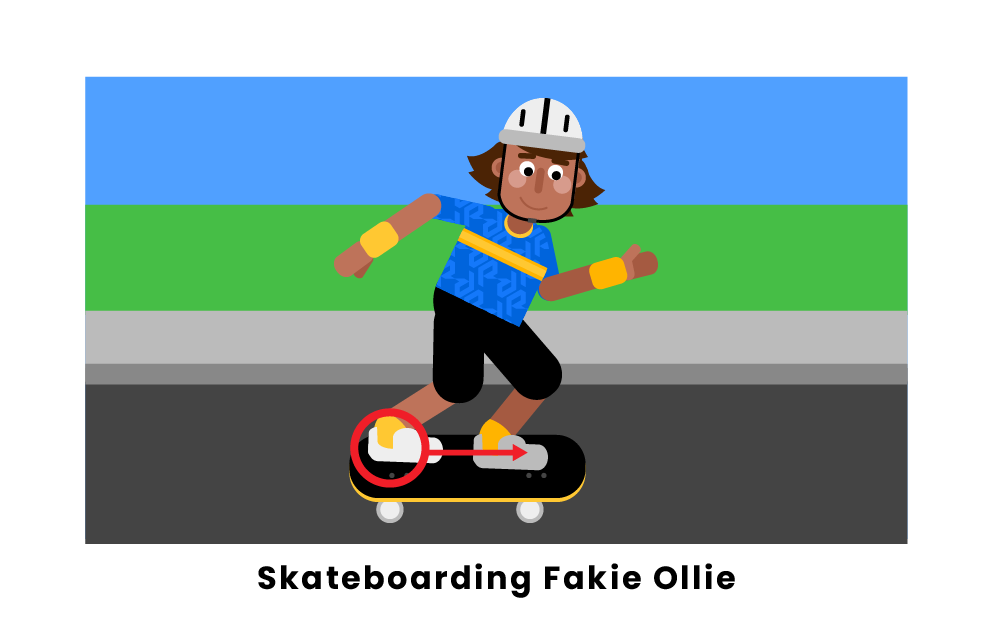 A fakie ollie is a variation of the regular ollie in which the skater ollies from the opposite side of the board. This means that the skater will place their front foot on the nose of the board and back foot near the middle. This trick can be done stationary or while in motion. It is similar to a nollie, except the skater is not riding in switch.

To start a fakie ollie, you should put pressure on the front side of the board. Then, snap up the board and drag your back foot backwards on the board, which is the opposite of a regular ollie. To finish the trick, land your board as you would on a regular ollie. The whole trick should look similar to a regular ollie except backward.