Top 10 Skateboarders of All Time 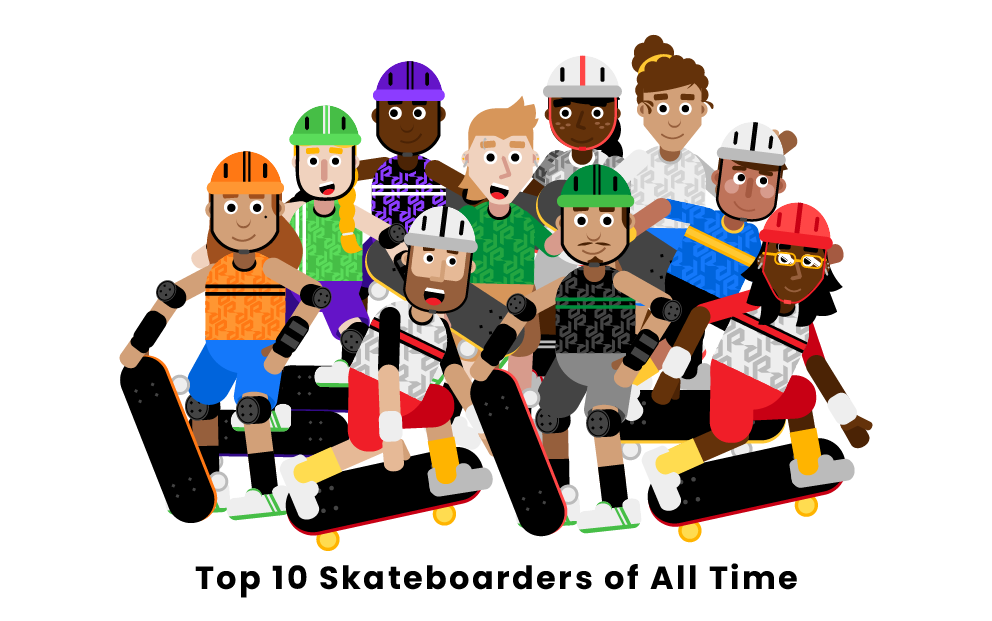 Who are the most popular skateboarders?

Those who are familiar with skateboarding are aware of Rodney Mullen’s superior talent and heavy influence on the sport. He is considered to be one of the best skateboarders of all time due to his amazing tricks, crazy stunts, and long list of notable achievements. At only 14 years-old, Mullen secured his first World Skateboard Championship. Since then, he has won dozens of championships and titles, and has invented several tricks that are now staples of street skateboarding, including the one-footed ollie and 360 flip. He is referred to as the “Godfather of Street Skateboarding,” and is an idol for anyone interested in skateboarding.

Tony Hawk, also known as “The Birdman,” is a legend in the world of skateboarding. At just 14 years-old, Tony became a professional skater. He has achieved many firsts in skateboarding including being the first man ever to complete 900 flips, and to keep a skateboard under his feet and land in front of 275,000 people. He has been the National Skateboard Association title holder 12 times, and has various other awards and titles under his belt. He was a big part of bringing skateboarding to mainstream media and the public, and making it incredibly popular. He is also the founder of Hawk Foundation, with the mission to build more skateparks around the country.

Roberto Dean Silva Burnquist, better known as Bob Burnquist, is a Brazilian-born American professional skateboarder. He is well known for his elaborate and innovative vertical tricks, as well as his switch stance skateboarding techniques. He was the first skateboarder to land a “fakie 900” in 2010, and was the fifth person in history to successfully complete 900 tricks. One of his signature tricks is called the “One-Footed Smith Grind.” Additionally, after completing his Fakie 5-0 in 2000, Bob achieved the X-games Best Trick Award. With the remarkable ability to switch positions and make difficult tricks look easy, Burnquist ranks high on the list of top skaters.

Danny Way is certainly one of the most daring skaters to ever participate in the sport. He is well-known for his extreme stunts, such as jumping onto a skate ramp from a helicopter and jumping the Great Wall of China with a skateboard. He experienced multiple injuries as a result, but he is determined to keep pushing the bar. His stunting has paid off, as he has made it to X-Games many times and was recognized as the world’s best skateboarder twice. Skateboarding fans around the world recognize his talent and respect his elite performances and stunts.

Bucky Lasek is an American skater best known for his talent and consistency. He earned a professional skateboarding status with Powell in 1990 after years of participating in amateur competitions. Since then, he has gone to 10 X Games competitions, and has stayed extremely competitive even in his older age. He has placed or shown in dozens of competitions with his incredibly complex tricks. Because of his daring nature, he has experienced many unfortunate injuries that at times have halted his success. However, he works hard to bounce back, and his extraordinary skills and talent always break through.

Eric Koston is a professional American skateboarder and business owner. His friend and teammate, Brandon Biebel, calls him the Michael Jordan of skateboarding. After dropping out of high school, Eric spent a lot of time skateboarding and perfecting his practice. At only 18, he was already skating like a professional and nailing some crazy tricks. He has won several competitions during his career, and has taken street skateboarding to the level of perfection. His focus is on being creative with the style of skateboarding he chooses, but also clean and technical in the way he executes his moves.

Nyjah Huston is an up-and-coming skating superstar. He started skating at 4 and spent his childhood days practicing in a skatepark that his parents owned. He would spend at least 5 hours a day going through a tricks list and nailing each one before moving on to a new one. He already secured a sponsorship from Element by the time he was 7 years old. Now 24 years old, Nyjah has accomplished a first place finish in SLS, 5 World Skateboarding Championship medals, 12 X Games medals, winning in Tampa Pro, and much more. He is the highest paid skateboarder around, and is currently one of the best in the sport.

Andrew Reynolds is a renowned professional skateboarder and business owner. He is an extremely influential role model for young skaters across the country. He began skating at the age of 9 and learned to hone his skills and talent fairly quickly. He enjoys performing many tricks and stunts, especially those that involve a ramp. Andrew has always done what he can to make this sport fresh, unique, and fun. He founded his brand “Baker” in the 2000s to do just this. It is known as being the best skateboarding brand around that offers a wide variety of pieces and styles.

Chris Cole is another professional skateboarder known for his insane tricks and stunts. He began skateboarding at 11 years-old, and quickly mastered the switch frontside flip, backside flip, and backside 360. He has won several awards, including 5 medals from the X Games and victories in Battle of the Berrics, Dew Tour, Maloof Money Cup Championship, Street League Skateboarding, and Copenhagen Pro. He has a highly successful career and has received a lot of recognition for his ability to land many tricks. He is undoubtedly one of the best skateboarders to ever participate in the sport.

Mark Gonzalez is considered to be a pioneer of street skating. He is mostly famous for his elite grinding and gap-clearing tricks. He was one of the very first athletes to experiment with skating on a handrail, stairs sets, and big gaps. Additionally, he can flawlessly execute double flips, nollies, 360’s, and flip tricks. Today, it might seem like his abilities are basic, but he was the one who started them all. Gonzalez is undoubtedly one of the most entertaining skaters to watch and the impact that he has left on the skating world inspires many people around the world.

Ryan Sheckler began his skateboarding career early, competing in the California Amateur Skateboard League (CASL) beginning at the age of 6. By 13 years-old, he was already a professional skateboarder, and that same year, he won the 2003 X Games gold medal in skateboarding, the youngest skateboarder in history to win the award. To this day, no other skateboarder has won a gold medal at the X Games at a younger age. After his gold medal win, Sheckler went on to capture seven more X Games medals across 17 total appearances. He also gained notoriety for his three-season MTV reality show, “Life of Ryan,” but was most well-known for his skateboarding videos, such as Plan B’s famous video “True.”

Known to skateboard enthusiasts as “P-Rod,” Paul Rodriguez didn’t gain his fame in the skateboarding world until 2004, when he won his first professional competition. That competition turned out to be the X Games, and Rodriguez won gold at it. The accomplishment was particularly special for Rodriguez because his father, a famous comedian who did not approve of his skating career, was in attendance at the games, witnessing his son’s win. After his first win, Rodriguez returned to the X Games 14 times, winning seven more medals. Paul Rodriguez went on to become the owner of Primitive Skateboards, a company which sets decks, skateboarding gear, and other skating apparel.

While Daewon Song only has one X Games medal, a bronze won in 2011, he nonetheless deserves recognition on this list for his impressive body of work outside of competition. Known for being a street skater rather than a competitive one, Song has become renowned throughout the skating world for his innovative and exciting skateboarding videos. His videos, in fact, were the source of his X Games medal, as he submitted a minute-long segment of his skateboarding footage as part of the “Real Street” contest format, in which skateboarders are allowed to compete in the X Games via video performance.

Who is the greatest skateboarder of all time?

The greatest skateboarder of all time is Rodney Mullen. Mullen was a prodigy, winning his very first world championship at the age of 14. He is also credited with inventing some of the most iconic tricks in skateboarding, such as the one-footed ollie and the 360 flip. For all of these reasons, Mullen is commonly bestowed with the title of “Godfather of Street Skateboarding.”

What skateboarder has the most X Game medals?

Bob Burnquist holds the record for the most total X Game medals with 30. Burnquist competed in the X Games for over two decades, and is widely regarded as one of the best skateboarders of all time. His 30 gold medals include a total of fourteen gold medals.

What is the hardest trick ever performed in the X Games?

While it is certainly up for debate, the hardest trick ever performed at the X Games is widely considered to be the 1080 on the vert ramp. This astonishing trick has eluded many of the sport’s all time greats, including Tony Hawk himself. However, in 2021, 12 year old Gui Khury became the first skateboarder to ever successfully land the trick. This was a remarkable feat, especially for such a young skateboarder.

Pages Related to Top 10 Skateboarders of All Time