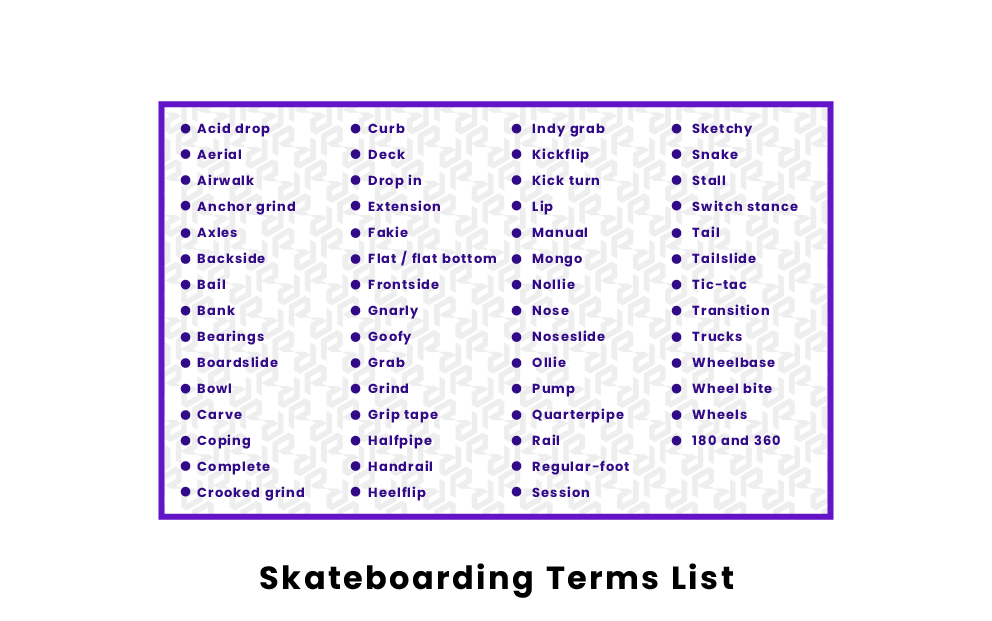 The skateboarding vocabulary is immense and includes a specialized list of terms and slang used to describe tricks and skateboard parts. If you’re new to skateboarding, you’re bound to come across some words you’re unfamiliar with. Skateboarding lingo varies depending on the location, but the following glossary of terms is universally understood in the skateboarding community.

Acid drop: A trick in which the skater rides off the end of a ledge without touching the board with their hands and without doing an ollie. This trick requires the skater to maintain their momentum when they land so that their board keeps rolling.

Aerial: Sometimes shortened to air, this is a skateboard trick in which all four wheels leave the ground.

Airwalk: An aerial trick that requires the skater to grab the nose of their board, kick their feet out while airborne, then get their feet quickly back on the board as they are about to land on the ground.

Anchor grind: A trick performed in which the board’s front truck is grinded on a surface and the board’s tail is pointed down and away from the surface.

Axles: Commonly referred to as trucks, the axles are metal rods that connect the wheels to the deck and provides turning capabilities for the skateboard.

Backside: A trick performed with the skater’s back facing the bank or obstacle.

Bail: To jump or step safely from the board when a move goes wrong. A skater bails when they realize they are not going to land their trick properly and decide to attempt a painless landing instead.

Bank: A slanted wall or surface used for riding skateboards up and down and performing tricks.

Bearings: Round metal discs that fit inside a skateboard’s wheels and attach them to the axle. The discs ride on interior balls, a function that allows the wheels to turn.

Boardslide: Also referred to as a railslide, this trick involves sliding the underside of the skateboard along a surface such as a rail or curb. Unlike a grind, the trucks do not touch the obstacle during a boardslide. Additionally, the board must be perpendicular to the obstacle.

Bowl: A skateable object in which the walls wrap around 360 degrees to form a bowl. Bowls are most commonly found in skate parks, but empty pools can act as bowls as well.

Carve: A move in which the skater makes a long, curving arc. Carving is used to build momentum and is particularly useful when skating in a bowl.

Coping: The material, typically metal or cement, that runs along the lip of transitioned ramps and provides a protrusion for grinding or sliding.

Complete: A skateboard equipped with all its components, including the deck, trucks, wheels, bearings, and grip tape.

Crooked grind: A grind performed in which the deck is not directly over the obstacle. Only the front truck is used for this type of grind. The nose end of the board should angle down towards the obstacle while the tail end points up and away from the obstacle.

Curb: The raised edge of a sidewalk located beside a street. Curbs are often used to perform skateboard tricks.

Deck: The wooden top of the skateboard. Decks are usually made of seven or nine layers of birch or maple wood that are laminated together.

Drop in: A maneuver in which the skater transitions from a flat platform onto a steep surface. This can be done by placing the tail end of the skateboard on the platform’s edge and leaning forward into the drop.

Extension: The section of a ramp where the transition extends higher than the remaining area.

Fakie: When a skater is in their normal stance but skates backward on their board.

Flat / flat bottom: Any flat surface at the bottom of a transition.

Frontside: When a trick is performed while the skater is facing the ramp or obstacle.

Gnarly: A phrase sometimes used by skaters to describe a trick that is particularly exciting or impressive.

Goofy: A skating stance in which the right foot is the lead foot. This position requires the skater to push off with their left foot.

Grab: To use one or both hands to hold the board during a trick.

Grind: A trick that involves scraping one or both axles on a surface such as a curb or railing.

Grip tape: Adhesive-backed sandpaper attached to the deck to provide traction for skaters.

Halfpipe: A U-shaped ramp with a flat bottom positioned between two concave transitions that lead to vertical surfaces on either side. Halfpipes are used to perform a variety of tricks.

Handrail: Commonly found in urban settings, handrails can be used to perform tricks such as grinds and slides.

Heelflip: A trick performed in the middle of an ollie in which the skater uses their front heel to flip the board 360 degrees along its lengthwise axis.

Indy grab: When a skater grabs the board mid-air with their back hand.

Kickflip: A trick performed in the middle of an ollie in which the skater uses their front toe to flip the board 360 degrees along its lengthwise axis. During a heelflip, the board is flipped in the opposite direction of the way it would be flipped in a heelflip.

Kick turn: A maneuver used to twist the board in a different direction by shifting weight to the tail of the board and turning.

Lip: The top edge of the bowl or ramp.

Manual: A trick where the skater balances either the front or back wheels of the board without the other end touching the ground.

Mongo: An unusual technique in which the skater pushes the board with the front foot while the back foot remains on the board.

Nollie: Short for nose ollie, the nollie is a variation of the ollie. To perform a nollie, the skater uses their front foot to pop the nose of the board against the ground.

Nose: The front of the skateboard, which includes the section from the front truck bolts to the tip of the board.

Noseslide: A trick in which the skater slides the underside of the board’s nose along a ledge or lip.

Ollie: This move is the basis of most skating tricks. An ollie is performed by using the back foot to pop the tail of the board against the ground while the front foot lifts the board up into the air.

Pump: When a skater extends their legs at the right moment on a transition to build up speed.

Quarterpipe: One side of a halfpipe. Unlike a halfpipe, a quarterpipe only features one concave vertical ramp.

Rail: The edge of the skateboard. The term ‘rail’ can also be used to describe a handrail or any object meant to emulate a handrail.

Regular-foot: A skating stance in which the left foot is the lead foot. Riding regular-foot requires the skater to push off with their right foot.

Session: Sometimes shortened to ‘sesh’, this is any time skaters get together at a location to skate.

Sketchy: A term used to describe a trick that is poorly executed.

Snake: To steal or cut off somebody’s line at a skatepark.

Stall: When a skater holds a trick for a certain amount of time before re-entering a transition.

Tail: The rear of the skateboard, which includes the section from the rear truck bolts to the end of the board.

Tailslide: A trick in which the skater slides the underside of the board’s tail along an obstacle.

Tic-tac: When a skater pivots left and right on the back wheels of their board, either as a way to accelerate or to keep their balance when landing an off-center trick.

Transition: Any skating surface that is not horizontal or vertical. Generally speaking, a transition is a curved surface between 0 and 90 degrees.

Trucks: The front and rear axles of the skateboard. The trucks are made up of a hanger, baseplate, axle, and kingpin. The kingpin is an important part of the trucks. Tightening the kingpin bolt provides the board with more stability while loosening the kingpin gives the board more turning capability.

Wheelbase: The distance between the board’s inner truck bolt holes, which dictates the length between the front and back wheels. A longer wheelbase provides more stability, while a shorter wheelbase allows for tighter turning capabilities.

Wheel bite: When too much weight is applied to one side of the board and the underside of the deck touches a wheel and stops its rotation.

Wheels: What the board rolls on. Wheels are usually made of polyurethane and measured in terms of their size and hardness.