How Much Do Skateboarders Make? 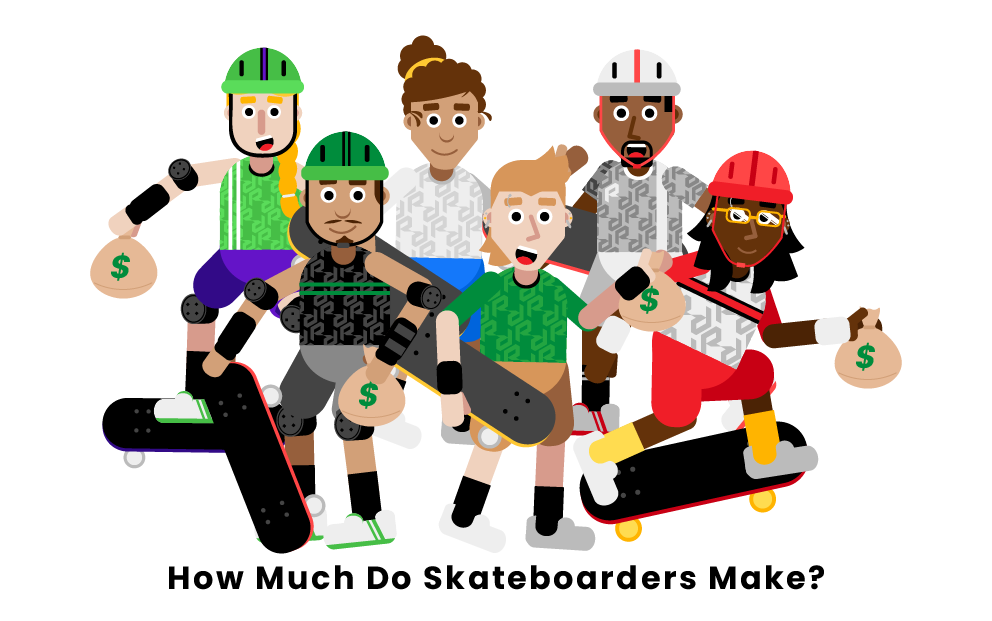 The average professional skateboarder makes about $64,000 per year. However, the amount of money skateboarders make depends on many different factors. The main factor is how good a skateboarder is. In most cases, the most talented skateboarders will make the most money. It also depends on what kind of career a skateboarder wants, specifically whether or not they choose to enter competitions such as the X Games or Street League Skateboarding. Competitions are a way for skateboarders to make quite a bit of money, and it also helps to attract more sponsorships, which is the primary way that skateboarders make money. Additionally, the skateboarding world has a long tradition of entrepreneurship, where skaters create their own brands or companies and generate money that way.

Finding a brand to sponsor you is perhaps the most important part of earning money through skateboarding. Sponsorship essentially means a brand likes a skateboarder’s style or skill and wants them to represent its brand. Sponsorship takes many forms, but it’s usually broken down into three levels: flow, amateur, and professional.

A flow sponsorship is very casual and usually only involves the brand sending occasional packages of merchandise to a skateboarder, but there is no exchange of money or financial support.

An amateur sponsorship includes some financial support from a brand, occasionally paying for hotel accommodations or contest entry fees. At this stage, the skateboarder is normally listed as an official member of that brand’s “team.”

Many skateboarders strive to achieve a professional sponsorship deal in their careers. Under this deal, riders normally receive a salary of varying amounts and have pro model skateboards, shoes, and other apparel, which they make a commission off of. Naturally, this level of sponsorship is highly sought-after and thus very competitive.

With enough talent and hard work, skateboarders can make a handsome living through success in skateboarding competitions. There are many skateboarding competitions, ranging from small amateur contests to massive ones with millions of people tuning in to watch. The most famous amateur competition is the Tampa Am, which features a grand prize of $1000. What the Tampa Am lacks in prize money (like most amateur contests), it makes up for in prestige. Winning the contest practically guarantees a pro sponsorship in the future.

In addition to sponsorships and competitions, another common way to make money in skateboarding is through entrepreneurship. It’s very common for skateboarders to create their own brands, which can generate quite a bit of money. Perhaps the most famous example would be the invention of Street League Skateboarding, an entire competitive league for pro skateboarders, by Rob Dyrdek, a former professional skater.

In 2014, Street League was valued at upwards of $12 million and has only continued to grow. While Street League is perhaps the most lucrative example, it’s more common for skaters to start brands that create actual skateboards and skateboarding-related apparel. One of the top brands in skateboarding today is Toy Machine, which was started by the former pro Ed Templeton in 1993. It’s a very common career progression for pro-skateboarders to turn their sights to entrepreneurship once they aren’t able to compete at the highest levels anymore.

Can you make a living off of skateboarding?

How do skateboarders get paid?

Most of the time, skateboarders are either paid through a salary if they are professional sponsored skateboarders or receive money from contest prize purses. In addition, especially in recent years, skateboarders have been able to make money on the side from short-term brand deals and endorsements. Nowadays, this is done through social media platforms, and the pay varies widely, depending on the scale of the endorsement and the fame of the skater.

What is the highest skateboarding prize purse ever?

The highest prize purse in skateboarding comes from the contest circuit known as Street League Skateboarding (SLS). SLS was started by former pro skateboarder Rob Dyrdek. The league features pro skateboarders who travel around the world to compete in four different contests. The total prize purse for the league amounts to over $1 million, and the winner of the championship gets a whopping $150,000 check written in their name. As such, SLS attracts the biggest names in pro skateboarding thanks to all the prize money it gives out.

Pages Related to How Much Do Skateboarders Make?