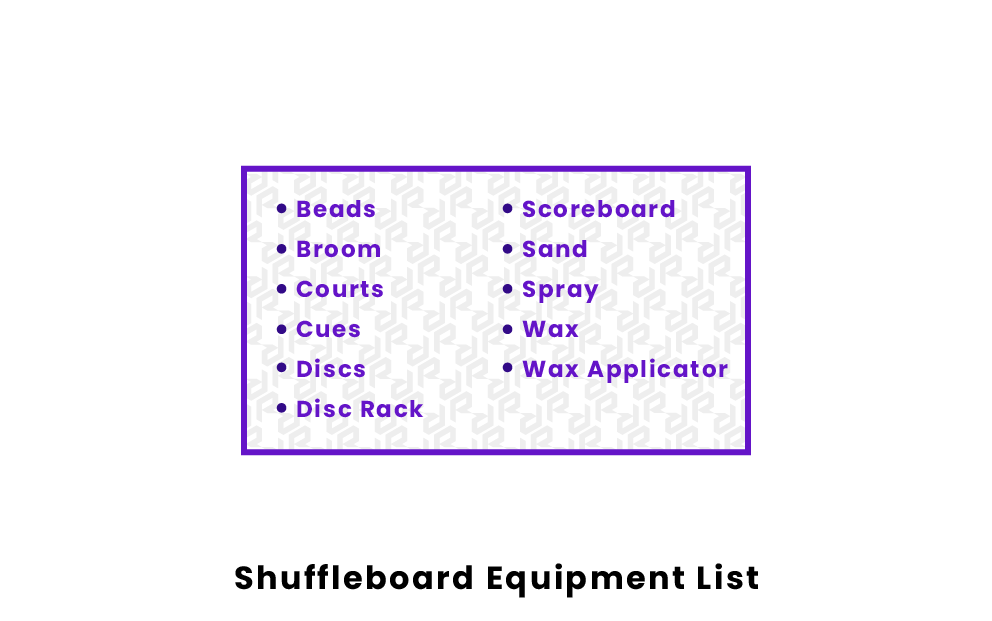 The game's objective is to shoot discs with a cue, or by hand, into an area with a corresponding number representing the amount of points the shooter will gain. Players take turns shooting until the final score is reached, which depends on the type of shuffleboard being played. 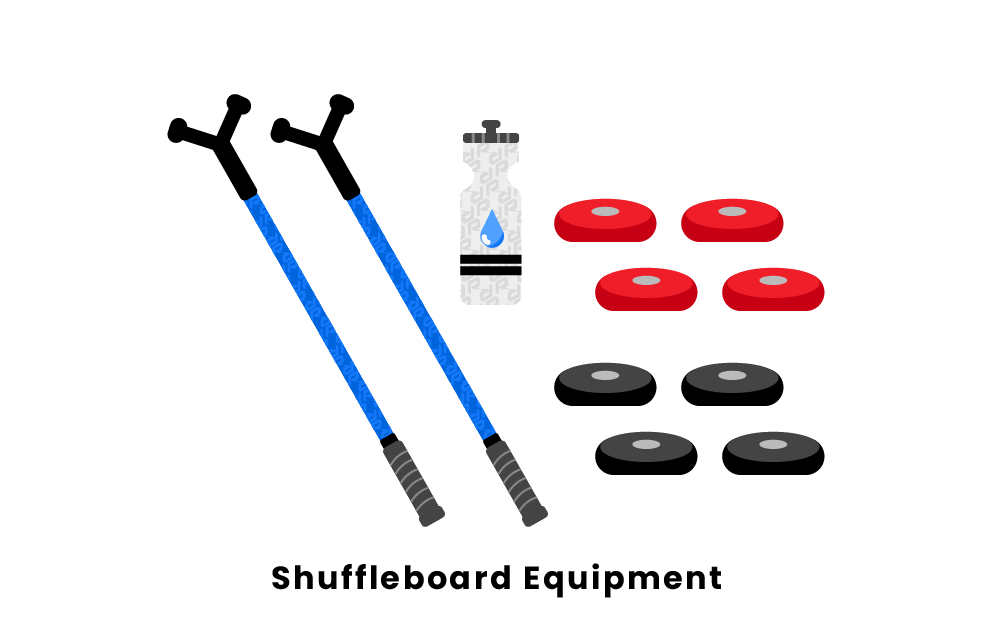 Beads are used to help the disc or puck move seamlessly on the board. Beads come in both glass and plastic and can also be powdered. Glass beads are meant to be used on concrete boards. The glass material makes these beads much more slippery than plastic beads so it's not recommended to use them where pedestrians could be walking. Plastic beads can be used on any board. Beads need to be spread evenly across the playing surface to be effective.

Shuffleboard brooms are used to clean the aforementioned beads off the playing surface. It allows for a quick cleanup and the replacement of the beads with new ones. It's important to have a solid and big brush to catch the beads across the whole length of the table while being soft enough to not damage the board.

It's not possible to play shuffleboard without the court. Whether it's outside or inside, table or surface, the court is vital. If a single match is being played, each player stands on the same side of the court and alternates shooting the discs. Typically in table shuffleboard, there are three scoring areas valued at three, two or one points. In surface shuffleboard, there are five scoring areas: one 10-point, two eight-point and two-seven point areas. The furthest area is a 10-off section. Courts will sometimes have beads, seals and wax applied to the surface in order to have the discs slide easier and protect the surface.

Courts vary in outdoor and indoor shuffleboard. An outdoor court measures 52 feet in length and 10 feet in width. They also vary in the points awarded for shooting a disc into a certain area. For example, table shuffleboard has three scoring areas that reward the shooter with points of three, two or one. There are a 10-point, two eight-point, two seven-point, and one 10-point off areas on the shuffleboard's surface.

Cues are stick-like items necessary to shoot the discs. Cues can be used on outdoor surfaces or indoor table boards, but players often use their hands to slide the discs in this setting. Cues are important to have especially when playing on bigger, outdoor courts. Many times on indoor tables the discs can be pushed across the board with the player's hand. Cues come in many different shapes and sizes. They can also be made with a variety of materials such as aluminum, polyester, fiberglass and graphite. Experienced shuffleboard players will utilize a cue carrying case for easy transportation.

Shuffleboard discs are the item pushed across the shuffleboard court with the cue. Discs are used to score points. Where the disc lands will determine whether the shooter scores points or not. The official size of a shuffleboard disc is six inches in diameter. Discs differ in material depending on the court. Opposing players use different colored discs. Discs can also be referred to as pucks.Discs are the object that a player shoots to score points. Discs come in many different materials and differ in color for each player. Each player alternates shooting four discs. Some discs require the use of beads, sprays or wax in order to glide across the shuffleboard.

A disc rack is an optional piece of equipment for shuffleboard. Some boards come with a place to store the discs. If a player has their own personal discs, buying a disc rack in order to store and transport the pucks could be useful.

As in most competitive sports or games, a scoreboard is necessary to determine who wins. Shuffleboard is no different. Scores could be kept on something as simple as a piece of paper, but there are multiple scoreboards that can be used. Some shuffleboard tables or courts come with scoreboards already attached. The type of scoreboard used depends on whether you'll be inside or outside. There are plastic scoreboards with slidable pieces or erasable chalk scoreboards. A chalk scoreboard will need an eraser and chalk, if it isn't included with the scoreboard.

Sand is used to ensure a smooth surface for the discs to slide across. This can be seen frequently in recreational table shuffleboard, but could also be used on outdoor courts. Similar to wax and beads, this material is another option to add to the court. Sand is easier to add than wax as you don't have to wait for it to dry. It's up to the court owner, or players, if they'd prefer to use beads or sand.

Silicone spray can be added to the bottom of discs in order to provide smooth sliding across the court, much like beads, wax and sand. Some sprays allow for the player to utilize it on the entire board. Again, the preferences of the players and material of the court or discs determine whether spray, sand, beads or wax will be used.

Wax can be applied to the surface of the court so the discs slide smoothly across. This is time-consuming as the wax will need to be stripped and rewaxed on occasion. It will also take time to dry. After stripping the old wax, it's important to clean the surface with the broom so there aren't any bumps or uneven surfaces. Surface wax must also be applied at a certain temperature and only on concrete courts. Wax is a good way to protect the surface of the court. Wax can also be used on discs by applying it to the underside.

In order to apply wax to a shuffleboard surface, an applicator is needed. A good material for an applicator is lambswool. After stripping the old wax off and cleaning the surface, the lambswool applicator is used to apply the new wax. This will help keep a smooth surface and protect the board from things such as the sun and normal wear and tear.