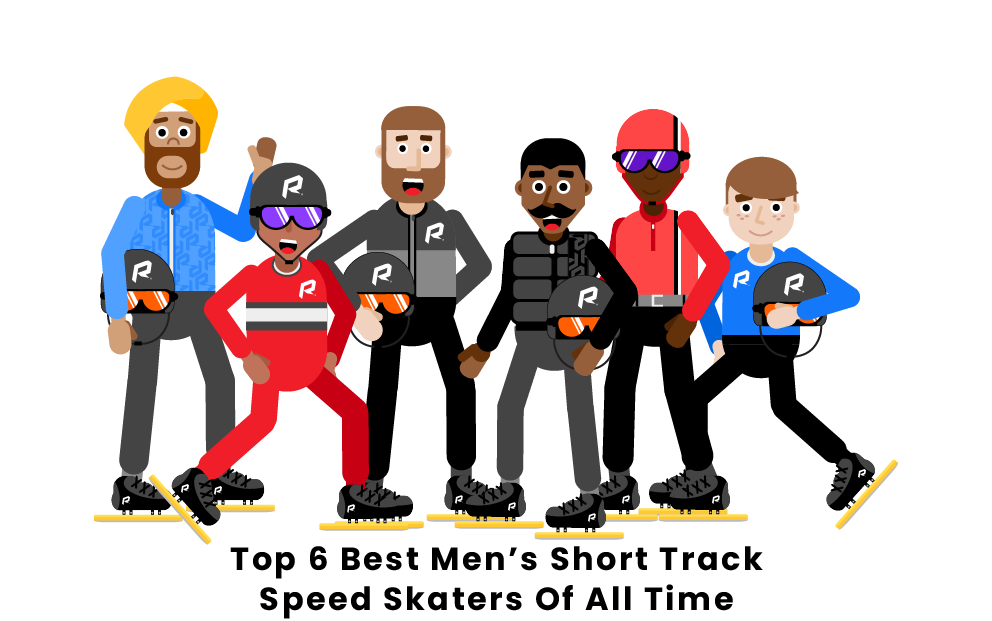 Who are the best men’s short track speed skating athletes of all time?

Skating for Russia, Viktor An, originally named An Hyun-Soo, was born in South Korea in 1985 and was inspired to begin skating at the age of eight after watching his fellow Korean, Chae Ji-Hoon, win gold and silver medals at the 1994 Lillehammer Winter Games. An’s height and weight made him a perfect candidate for speed skating. After honing his skills, he was able to win the Junior World Championships in 2002 and finish second in the Senior World Championships. He also made his Olympics debut that year in Salt Lake City, Utah, skating for South Korea but only earned a disappointing fourth-place finish. However, his career improved soon afterward, leading him to five consecutive world titles starting in 2003, and allowing him to return to the Winter Games at Turin in 2006, where he won an astonishing three gold medals and one bronze.

In 2008, a severe knee injury kept An out of his sport and prevented him from qualifying in the 2010 Vancouver Games. Before the 2014 Sochi Games, An fell-out with the Korean Skating Union and chose to skate for Russia, changing his name to Viktor. At Sochi, An won three more gold medals and another bronze, becoming the first speed skater to win Olympic gold in all four short-track distances. After the 2014 games, An’s career was impacted by the Russian doping scandal that led to his new home country being banned from the Pyeongchang Games in 2018. An himself never tested positive for any illegal drugs and appealed the IOC ruling, but his request was denied. He retired from skating in that same year.

One of the most famous American and international speed skaters, Apolo Ohno is one of the most decorated American athletes in the history of the Olympic Winter Games, with eight medals won over his many appearances on the rink. Raised by his Japanese-born father, Ohno was encouraged to pursue sports from an early age and was a successful swimmer and roller skater before transitioning to ice skating at age 12. At 14, based upon his natural skill, he was accepted into the residency program at the U.S. Olympic Training Center in New York, the youngest skater ever to be accepted there. He won the first of many U.S. Championships in 1997 and the World Cup in 2001 before making his Olympic debut in Salt Lake City. There, he was a favorite in the 1,000-meter event, but a large pile-up caused by China’s Li Jiajun caused everyone but Australia’s Steven Bradbury to fall, giving Bradbury the gold. Ohno managed to skate across the finish line second, earning silver. Ohno then won gold in the 1,500-meter event after South Korea’s Kim Dong-Sung was disqualified for obstructing his path.

Ohno’s career continued to skyrocket after Salt Lake City, and he won the World Cup in both 2003 and 2005 before returning to the Olympics in 2006 at Turin. At the 2006 Winter Olympics, he won a second gold and two bronze medals. His career continued to grow, and though he struggled in 2009, he was able to return to the Olympics in 2010, competing in Vancouver to win a silver and two bronze medals, bringing his official Olympic medal total to eight. The 2010 Olympics was Ohno’s final skating competition, but he did not officially announce his retirement until 2013.

A Canadian short track speed skater, Charles Hamelin shares the record for the Canadian male Olympian with the most Olympic medals, having won five in his career. Growing up in Quebec, he began speed skating at age nine, following in the footsteps of his younger brother François, who had begun to skate at five. Their father, Yves, took a strong interest in cultivating his sons’ talents, becoming their personal coach. Under his father’s tutelage, Charles won his first international medal at the 2002 World Junior Short Track Speed Skating Championships and finished second in the same championship the following year. Hamelin went on to win his first World Cup medal and his first World Cup race in 2004, beating American Apolo Ohno in the latter race, a 1,000-meter event. This proved that Hamelin was a rising star and prepared him for his coming Olympic victories.

At the 2006 Turin Winter Games, Hamelin won his first Olympic medal, a silver in the 3,000-meter men’s relay. Months after Turin, Hamelin won his first World Championship gold, and in the years that followed, he won many more titles and World Cup Races. He returned to the Olympics at Vancouver in 2010, having become a favorite after winning that year’s World Cup circuit. True to his rising fame, Hamelin set a record time of 40.770 seconds in the men’s quarterfinals for the 500-meter event. In the final, controversy erupted when there was significant contact between Hamelin and South Korea’s Si-Bak Sung, as well as between Hamelin’s fellow Canadian François-Louis Tremblay and American Apolo Ohno. Though Sung suggested that Hamelin had caused him to fall, the judges ultimately sided with Hamelin, giving him the gold. Hamelin’s career continued to rise, with more World Cups and Championships between 2010 and 2014, leading him into the Sochi Games, where he won his third gold. He later won a bronze at the 2018 Pyeongchang Games, becoming one of the most decorated Canadian athletes in Winter Olympics history.

Sharing a record with Charles Hamelin and François-Louis Tremblay, Marc Gagnon is another Canadian who has won five medals at the Olympic Games. Born in Quebec, Gagnon began skating at only the age of three, inspired by his brother Sylvain, much like Hamelin was. At five, he began short track skating and soon became one of the best skaters in Canada, working hard to overcome a diagnosis of defective knee joints that caused him great pain while skating. His perseverance led him to win his first World Championship at the age of 17, in a race where he beat his own brother to win gold. His success in the World Championship was well noted, as he’d go on to win a total of 11 gold medals in the competition during his career.

Gagnon made his Olympic debut at Lillehammer in 1994. He won a single bronze medal but made up for that disappointment with a gold in the 5,000-meter relay at the Nagano Games in 1998. After a brief break from skating, he returned to the Olympics in 2002, where he won his first individual gold and earned a bronze as a result of Kim Dong-Sun’s disqualification in the 1,500-meters. Gagnon also won his fifth medal at the 2002 Games, a gold in the 5,000-meter relay.

The third Canadian Olympic skater with five medals in the Winter Games, François-Louis Tremblay cemented his name in Canadian history alongside Charles Hamelin and Marc Gagnon, securing Canada’s dominance in the sport of short track speed skating. Beginning his career in 1999, Tremblay slowly rose through the ranks of Canadian skaters, winning silver at the 2001 World Championships. He entered into his first Olympics in 2002, earning gold in the 5,000-meter relay. He won two more World Championship golds and a silver medal in 2005 and made a strong return to the 2006 Turin Winter Games, where he won two silver medals.

After more World Championship medals between 2006 and 2010, Tremblay entered into the Vancouver Olympics, winning a bronze in the 500-meters and joining the podium with Charles Hamelin, who won gold. Later that same day, in the 5,000-meter relay, the two teammates competed side-by-side. Together, they employed a unique strategy called “Operation Cobra,” which gave Tremblay, the anchor skater, a longer period of rest. This allowed Tremblay to put on a stronger performance in the final two laps, allowing the Canadians to win gold, Tremblay’s fifth Olympic medal. Tremblay later won another World Championship gold in 2012.

Hailing from South Korea, Lee Ho-Suk successfully earned three overall World Junior Championship titles in his young career before joining his former Korean teammate An Hyun-Soo (later known as Viktor An) at the 2006 Turin Winter Games. There, Lee earned his first three Olympic medals, a gold in the 5,000-meter relay and silvers in the 1,000-meters and 1,500-meters. As a skater, Lee Ho-Suk is known for his skill at the outside pass, using the wider outer ring of the skating rink to pass his opponents. In the 1,000-meter race at the 2006 Games, he used this technique to pass American Apolo Ohno on the final lap of the race, earning silver and securing a 1-2 finish for South Korea. Considered one of the most promising young skaters, Lee returned to the Olympics in 2010, winning two silver medals at Vancouver, one in the 1,000-meters and another in the 5,000-meter relay.

Who is the greatest men’s short track speed skater of all time?

Russian short track speed skater Viktor An and American skater Apolo Ohno are widely considered to be the best short track speed skaters of all time. Over the course of their Olympic Games, An and Ohno both racked up a total of eight overall medals each, with An winning six gold and two bronze, and Ohno securing two gold, two silver, and four bronze. These achievements rank both of them among the most decorated athletes in Winter Olympics history.

Who has the most men’s World Short Track Speed Skating Championship gold medals?

What men’s short track speed skater has participated in the most Winter Olympic Games?