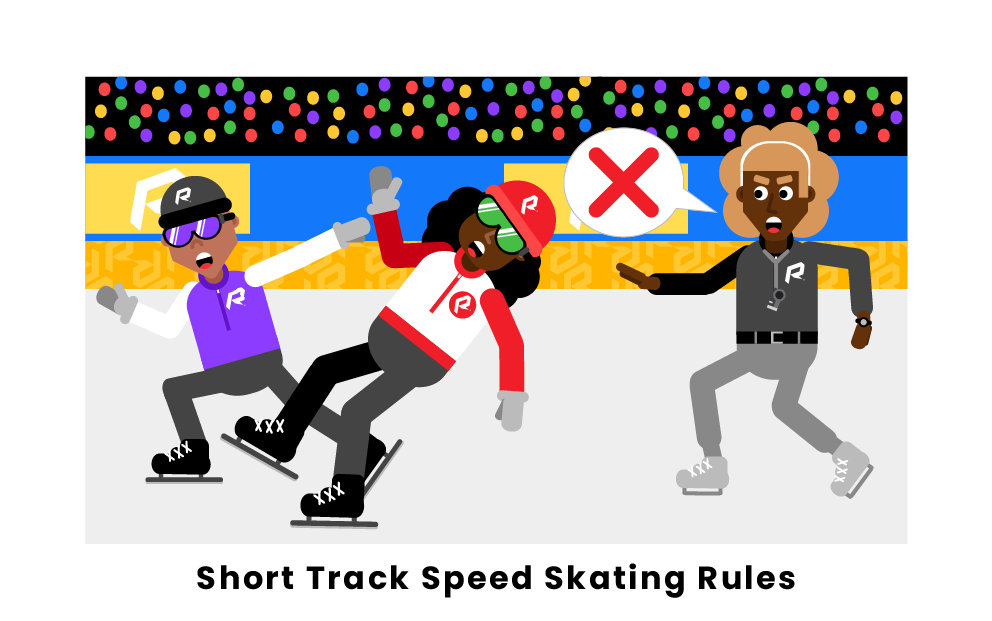 Invented in the early 20th century, short track speed skating is an increasingly popular and competitive sport, especially at the Winter Olympics. Unlike its long track counterpart, short track speed skaters race against one another rather than against the clock. This requires skill, strategy, and strict adherence to international rules.

What are the most important rules of short track?

The first and foremost starting rule of short track speed skating is that all participants must start simultaneously. Each race begins with the contestants standing in position at marked blue lines. The firing of a starting gun signals the beginning of a race. The skaters may begin moving only once the gun has been fired. If an athlete moves before the signal, a false start is declared and they are given a warning. If a competitor commits a false start more than once, they are at risk of being disqualified from the race.

For the safety and consistency of the sport, all short track speed skating competitors wear certain equipment. These include helmets, protective glasses, a speedsuit, shin guards, a neck guard, gloves, short track skates, and speed skating boots. Due to the high velocity and sharpness of turns necessary for competitive times, athletes wear a special skate with a higher boot and a taller blade. For the same reasons, all speed suits must be full-body and cut-resistant. All equipment must be approved, worn properly, and kept on for the entirety of the race. Except in situations beyond their control, such as in a fall, any skater improperly using or removing equipment faces potential penalties.

Unlike other forms of speed skating, short track competitions require skaters to race multiple rounds per distance and are scored accordingly. Based on these scores, the top athletes advance to later rounds while the lowest-scoring competitors are eliminated from the competition. In the Olympics, these rounds are divided into Heats, then Semifinals, followed by two Finals. The top three athletes from each initial Heat progress to the Semifinals. The top two skaters from each Semifinal qualify for Final A, while the Skaters ranked third and fourth qualify for Final B. The contestants in Final B are ranked for honor and classification, while the actual Olympic medals are awarded to the three fastest athletes from Final A.

Due to the extreme nature of the sport, there are several regulations required in competitive speed skating to ensure the safety of its participants. The first safety regulation is that water-resistant protective mats must be installed around the perimeter of the rink. In addition, all on-ice officials must wear appropriate attire, speed skates, and helmets. Skaters must wear these items as well as cut-resistant gloves, a cut-resistant neck guard, shin pads, and knee pads. All previously listed equipment must meet ASTM and ISU standards in safety. The Heat Box Steward checks each player’s compliance with safety standards before the race is allowed to begin.

Depending on the competition, the top skaters from each round advance to the next until there are two finals, usually with four final competitors each. Once a race has concluded, disqualifications may be called. If a violation does occur, especially one in which another athlete causes someone to fall, the victim of said infraction may be allowed to advance. It is the chief referee’s call alone to decide whether it is probable that the violation stopped the victim from being in contention to advance. In such cases, more than the usual four athletes may skate in the next or final round.

In short track speed skating, participants are eliminated either through slower times or violations/disqualifications. Once a skater is eliminated at any stage, they can no longer continue in the competition. There is no traditional repechage option. If a skater qualifies for a final but is injured before the race begins, they are not replaced. Though the B final is typically only for placement, B finalists may earn medals if only two athletes complete the A final without disqualification. In that case, the top athletes from the A final will receive the gold and silver while the top B athlete receives bronze.

If a competing athlete breaks the racing rules in a way that the referee deems unsafe, harmful, or hazardous, they will be presented with a yellow card. Actions that justify a yellow card include impeding an opponent, kicking out another player’s leg, or other dangerous behavior during competition. Any skater who receives a yellow card will be disqualified from the race and any remaining competition involved in that event. In addition, the skater must forfeit all results accrued in any previous rounds of said event. If a yellow card is given during a relay event, the skater’s team faces the same sanction as the individual player.

Athletes are disqualified for deliberately impeding another competitor, kicking out a skate in a way that endangers another skater, slowing down unnecessarily, skating off the track, committing two false starts, conspiring to affect the race’s outcome, and throwing oneself across the finish line. Disqualification is announced at the end of every round.

If such rule infringement or improper conduct is considered intentionally dangerous or grossly negligent, the skater will be shown a red card. This indicates that a skater will be immediately excluded from the current event and the rest of the Winter Olympic Games, as well as be listed as unranked at the bottom of the event classification. As with yellow cards, the entire relay team suffers the same sanctions as any player who is shown a red card.

Athletes qualify for Olympic competition through the ISU Short Track Speed Skating World Cup that precedes the Winter Olympics. A total quota of 112 athletes is allowed to compete based on their performance. Each nation is allowed to enter a maximum of three to five athletes depending on relay results and how many starting spaces the NOC (National Olympic Committee) has qualified. The host nation is guaranteed a quota of one entry per race. If the quotas have not been fulfilled, the NOC will determine the eligibility of participants based on their ranking in the World Cup standings until the quota is fulfilled.

How many racers are there in a short track race?

Short track speed skating races occur with groups of four to eight contestants at a time.

Athletes compete either as individuals or in teams of four. Every skater on each team must take at least one turn by tagging in, with one final exchange being allowed in the last three laps of the race. Traditionally, these relay teams consist of either all men or women, but the mixed relay event premiering at the 2022 Beijing Olympics involves teams of two men and two women.

What are the dimensions of an Olympic short track speed skating track?

According to ISU regulations, an Olympic short track speed skating track must be oval-shaped and have an area of 111.12 meters. It must also be contained within an enclosed and covered ice rink that measures a minimum of 60 meters long and 30 meters wide. All curves and turns must be symmetrical, and there will be five to seven tracks in total, all of which must have precise dimensions that meet the standards of the ISU.

How many laps are there in a short track speed skating race?