How Does Scoring Work in Short Track Speed Skating? 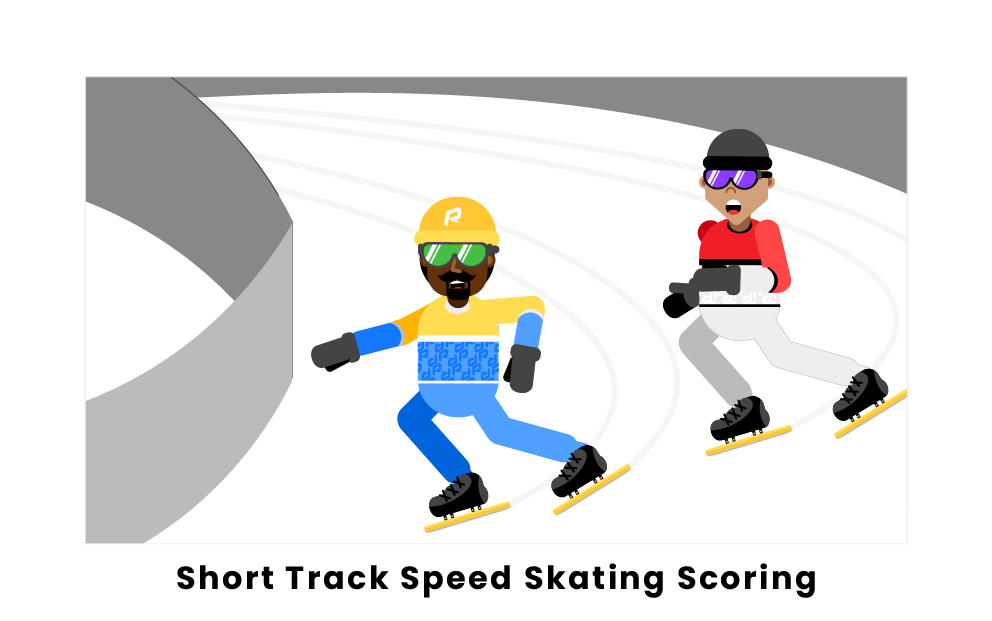 Non-Olympic international competitions such as the World Cup for short track speed skating use a scoring system that awards points to skaters based on their finishing placement in a race. Under the rules of the International Skating Union, competitors who finish in the top eight earn points in values of 34, 21, 13, 8, 5,  3, 2, or 1 from first place to eighth, respectively. The skater with the highest point value advances to the next rounds of a race or to the win entirely, while those with lower scores are eliminated. The times and point systems of international competitions are used to qualify short track skaters for the Olympics.

Olympic short track speed skating simply uses a contestant’s or a relay team’s time as their score as they compete in a series of rounds from the preliminary heats to the finals. An athlete’s placement in each race determines whether they advance to the finals. The first round of races are preliminary competitions known as heats, the second round is the quarter-finals, the third is the semi-finals, and the fourth are final A and final B.

The 500m and 1000m events consist of 16 races in which each athlete will have participated in four races as the rounds advance. The heats consist of eight separate races with four competitors per race (32 skaters in total). The top two skaters in each race advance to the quarter-finals, wherein the remaining 16 skaters once again race in groups of four, with the top two in each race advancing to the semi-finals. The remaining eight race again in groups of four in the semi-finals to determine whether they advance to the A finals or the B finals. First and second place contestants from each semi-final race go to the A finals, where medals are awarded, while third and fourth place contestants of each semi-final go to the B final to determine placement.

The 1500m race begins with 36 competitors who race six at a time. It takes place over three rounds progressing from the heats, then to the semi-finals (three races between 18 skaters), and finally to final A and final B. The top three skaters advance to the next rounds, while the bottom three are eliminated. Same as the 500m and 1000m races, the top three groups of the semi-finals compete for a medal in final A, whereas the bottom three groups of the semi-finals compete for placement in final B.

Traditional relay races in short track skating are comprised of eight four-person teams who compete in rounds, including the semi-finals and the finals (final A and final B). Women’s teams compete in a 3000m race with 27 laps, while men’s teams compete in a 5000m race with 45 laps. Unlike track and field relays which have designated drop-off points to exchange the baton, a new skater can be tagged in at any point in the race except for the final two laps. The semi-finals consist of two races between four teams each. The top two of each grouping go on to compete for medals in final A, while third and fourth place teams compete for placement in final B.

The mixed relay is a new formal addition to the Olympics which premiered in the 2022 Beijing games. It is a 2000m, 18-lap race that features a four-person relay team consisting of two men and two women. While competitors can still somewhat strategize when to tag in their teammates as in the traditional relay, the mixed relay race calls for skaters to enter in the order of: woman, woman, man, man, woman, woman, man, man. It follows the same placement format as the traditional relay, with eight-team semi-finals competitions and A and B finals.

How does scoring work in short track speed skating?

Scoring in short track speed skating is based on a skater’s placement in races over a series of rounds. In non-Olympic ISU-based competitions like the World Cup, a scoring system awards points to the top eight competitors throughout the rounds, with first-place receiving the most points and eighth place the least. The points are then added through the rounds to eliminate slower skaters and ultimately award a winner. Olympic short track skaters are scored based on their time alone, and they also eliminate lower placements over a series of rounds.

How does short track speed skating work in the Olympics?

How does a false start affect your score in short track speed skating?

Pages Related to How Does Scoring Work in Short Track Speed Skating?