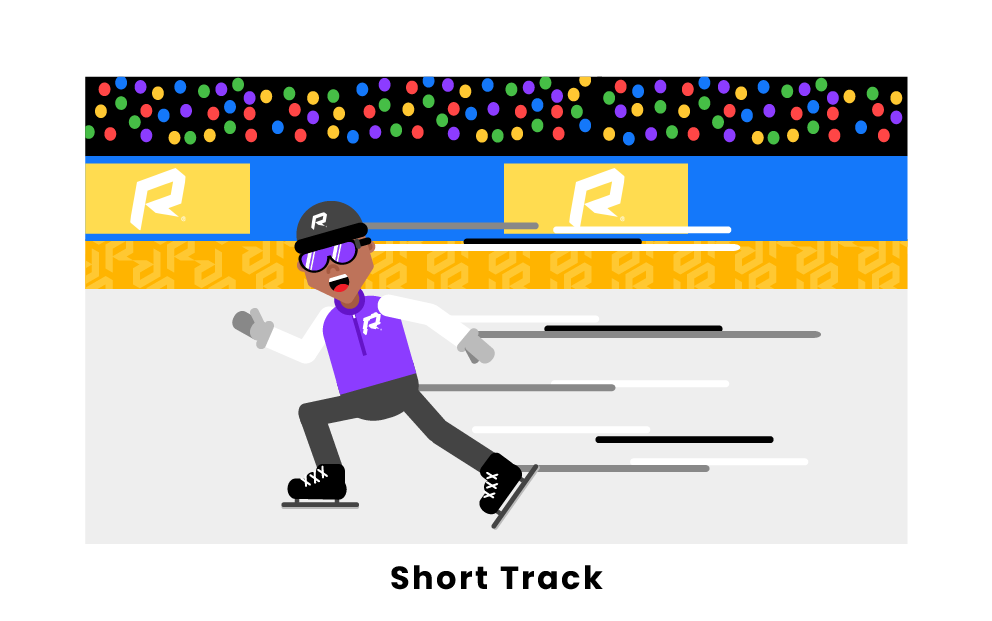 Short track is an Olympic speed skating event where skaters dash around a 111-meter ice track. It is a racing sport, and the first to the finish line wins. It is one of the two main categories of speed skating, the other one being long track. Short track events range from the 500 meter individual race to the 5000 meter relay.

Short track speed skating originated in North America in the early 1900s. In those days, races were held as "mass-start" sprints with as many as twenty racers at a time. Today, most races have between four and six competitors. The sport came about because of the scarcity of proper 400m length long tracks. Many people wanted to try out speed skating, but so few had access to a long track that they started placing cones on local ice rinks to measure out "short tracks" instead. The new sport quickly caught on, and it was finally added to the Olympics in 1992.

Although North Americans dominated the sport's early history, in recent years the Chinese and South Koreans have become impressive forces on the short track scene.

Perhaps the most defining feature of short track speed skating is its rink. The short track is 111 meters long along its innermost path, and must be at least 7 meters wide on the straightaways. Because the length of the short track is so small, the majority of a skater's time is spent on the track's sharp turns. The track itself lies within a covered, heated ice rink, and is ringed with protective padding so that an out-of-control skater doesn't get injured in the event of a crash. There is only one finish line, but multiple start lines for the different events.

The equipment is also a defining feature of short track speed skating. Some pieces include:

The short track skate in particular is quite different from what you would find at your local skating rink. The blade is fixed on a very stiff boot that is necessary to help the skater withstand G-forces that are equivalent to that of a space shuttle taking off! The blade itself is offset to the left, because the skater turns hard to that side, and is between 12 and 18 inches in length.

Short track races are incredible to behold. Skaters take off from the start line together, and as they gain momentum throughout the race on the slick ice of the track, they gradually get faster and faster. Each skater has a different strategy, and skaters will come off the turns at incredible speeds to try and get in front and on the inside of the track to cover the shortest distance possible. As the racers enter the final laps, they begin moving at blistering speeds, and before you know it, a photo-finish has taken place with the winner getting the advantage but less than a full skate sometimes!

While most of the short track events are individual battles, the relay races pack a ton of team tactics and strategy into races that are less than 7 minutes long! Each team is made of 4 skaters, and each member of the relay team has a specific role to play.

The lead-off skater must have explosive power to get off the starting line quickly, in the hopes of separating from the main pack before the handoff. Instead of handing off a baton in the relay, skaters switch off by tagging their teammates. The teammate taking over will crouch low, and the teammate about to step off the ice will give their teammate a "push off" as they tag them to take over. Teams can enter the final exchange neck-and-neck, and so the last leg of a relay team must be a skater with great sprinting speed to dash for the finish line.

The basic rules of speed skating are that of any race: everyone starts together, and the first athlete across the finish line wins. A skater crosses the finish line with the leading tip of their skate, and only then have they completed the race (even if they cross with their head or chest first). There are of course special regulations that ensure player safety, including:

There are many kinds of officials in short track, with responsibilities ranging from timing duties to ensuring competitor safety.

The referee is the chief official, who decides all appeals and final rulings. The referee is in charge of oversight, getting the other officials in line, and ensuring all competitors ultimately play fair.

The assistant referee is responsible for doing any task set to them by the referee, and takes over all operations if the referee gets sick or injured. They are almost like the vice-president of the officiating crew.

Even though you may only watch speed skating every four years at the Olympics, you probably still want to know what all of the special terms mean. Here a few must-know words in the short track speed skating world:

Coaching elite speed skaters is a full-time job. While it is possible to find places to skate year-round, many top coaches prefer their athletes to do other forms of exercise in the summer off-season in order to avoid burnout, such as cycling.

Skaters will start by building a base on the ice just to get used to skating again, and then from there they will build and build towards faster and more intense workouts. Coaches have their athletes do weight and mobility training, both essential aspects of a short track skater's athletic arsenal.

A coach must build a relationship of trust and friendship with their athletes to help them perform their best, and coaches should have ample psychological expertise in addition to their knowledge of speed skating itself.

Developing proper skating technique is of course vital to a skater's success. The three principle aspects of good technique are knee bend, upper body posture, and pushing to the side. Having a lot of knee bend maximizes the length of each skating stroke, meaning that you get more power with each step. The best way to hold your upper body is to have a bit of a "tuck," with your head in front of your knees and your back in a bit of a curve. This decreases drag and makes you generally more aerodynamic. The final piece of proper technique is "skating to the sides." Instead of pushing back with their skates, a good skater will push to the sides of the rink. Though it may be counterintuitive, pushing to the sides is actually the most efficient way to skate at high speeds.

The top speed skaters in the world are tactical masters. In short track, skaters are moving so quickly that they must be careful to waste as little energy as possible before the final sprint to the finish. Often, you will see race favorites sitting in the middle of the pack, drafting, for most of the race in an effort to stay out of trouble and avoid extra jockeying for position. Then, when a skater is ready to make his or her move, they will swing very wide coming off the turns and "sling" their momentum to fall into position at the front of the pack, where they were previously in the middle or back. From the front, they can dictate the race's pace, and are in the best position to take the win in the final stages of the race.

Even if you can't get onto the ice, there are plenty of drills that you can perform to hone your form and power.

One such drill is "dry skating." This drill is a series of one-legged squats, and in between each squat is a side-lunge that mimics skating side-to-side. Start standing on one leg, then squat down. Instead of coming back up, lunge from that position to the side, and then return to a standing position. After, do the same with your other leg, as many times as you want.

Another great drill is called "baby steps." Get into a good skating posture, and then take the smallest steps you possibly can. This will help strengthen the stability muscles that you'll use to keep your posture when skating on ice.

Short track was first added to the Olympic Program in the 1988 Calgary games, where it was a demonstration sport. Demonstration sports do not award medals, but they serve as "test runs" to promote the sport. It was very popular among viewers, so in the next winter Olympics in 1992, it was added as an official sport of the Olympic Games.

The top short track gear is going to be found in brands that specialize in speed skating. Here a few brands and websites with the best quality equipment:

Youth involvement in the sport of short track is of great importance. Today's children are tomorrow's Olympic champions, after all! There are countless organizations across the country, but here are a few with great track records and recommendations:

The path to becoming a top-notch short track coach is a difficult one. These coaches have made a name for themselves as successful athletes, as well as by coaching multiple athletes to Olympic and World Championship medals after retiring from competition.

Getting to the top in short track speed skating often means being one of the best to ever play the sport. Most of the best skaters are multiple-time Olympic Champions, have world records to their names, and have placed highly in world championship events from a young age. Here are some of the best short track skaters from the past 15 years:

While there is no unifying league for speed skating, the top series of events are part of the ISU World Cup. In addition to the World Cup, some countries (like China) have established leagues of their own, and there are a great many leagues and race series in the United States, like the Utah Masters Speed Skating League.

Short track skaters compete primarily for their country in competition. Year after year, the Netherlands, South Korea, and China produce the top athletes and results at world championship-level events. Here are the top-ranked countries and their teams in the world right now:

The premier short track tournament is the Olympic Games, held once every four years. The Olympic Champions are the best in the world. In addition, the World Championships are held every year, and the winners are deemed "world champions." Here's a short list of some additional top-flight races and tournaments:

If you're looking to read up on the subject of short track, there are a number of books to look into. Here is a sample of bestsellers that you might like:

If you're looking for news, updates, information, and rankings for short track speed skaters, here are the best websites to turn to:

What is Short Track?

Short track is a kind of speed skating that takes place on a small ice track that is 111 meters long. Skaters reach speeds that top 31 mph and races are contested between four and six racers on average.

How do you play short track speed skating?

Short track speed skating is, at its heart, a racing sport. The rules are simple: the skaters take off from the starting line together, skate around the track a certain number of laps, and the first to the finish line wins!

Short track speed skating originated in North America. It evolved from long track speed skaters who wanted to skate at their local rinks, so they marked out "short tracks" using cones that would fit on the small public rinks.

Where is speed skating most popular?

Although it originated in the United States and Canada, these days China and Korea are the dominant speed skating countries. The sport is also very popular in the Nordic countries like Sweden and the Netherlands.