What are the rules of shooting? 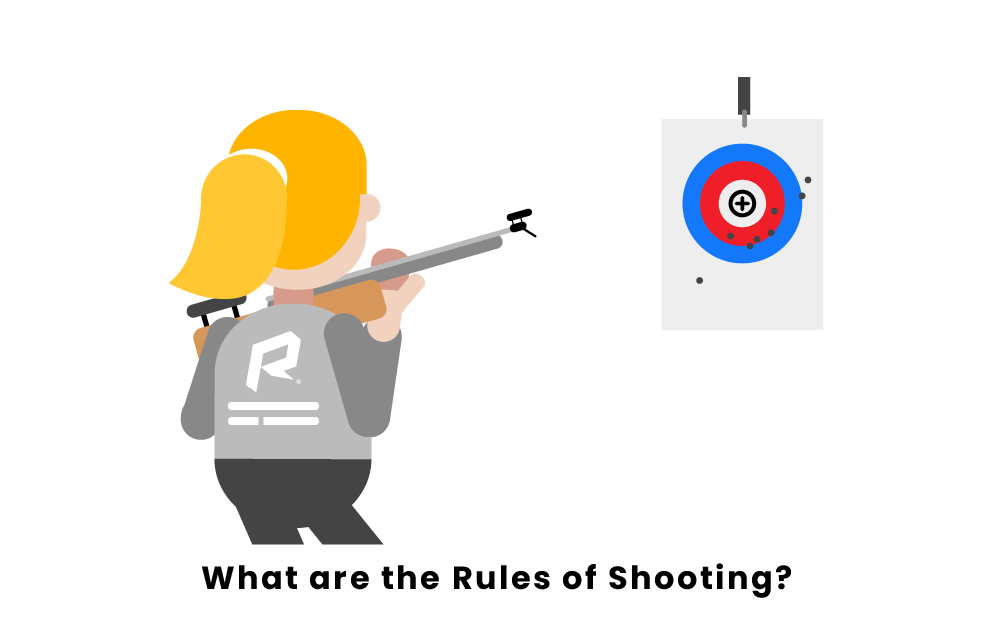 Shooting is a sport that requires immense focus and precision. Athletes train to shoot a target with either a rifle, pistol, or shotgun. In the Olympic games, there are 15 different shooting events offering a variety of distances and disciplines.

Shooters wear a combination of padded pants and jacket to increase the athletes focus on the target. Pads on the knees and elbows are allowed by the International Shooting Sport Federation (ISSF) to eliminate sourness a competitor may experience in the kneeling or prone positions during a competition. The approved jacket also features an increased layer of padding around the shoulder where the stock of the gun rests. The extra padding is designed to limit the effects of recoil on the shooter. In addition, shooters are allowed to wear blinders that limit peripheral vision and improve an athlete's focus. The ISSF does not regulate the shooting uniform heavily because the uniform is designed to protect shooters, not enhance their performance. 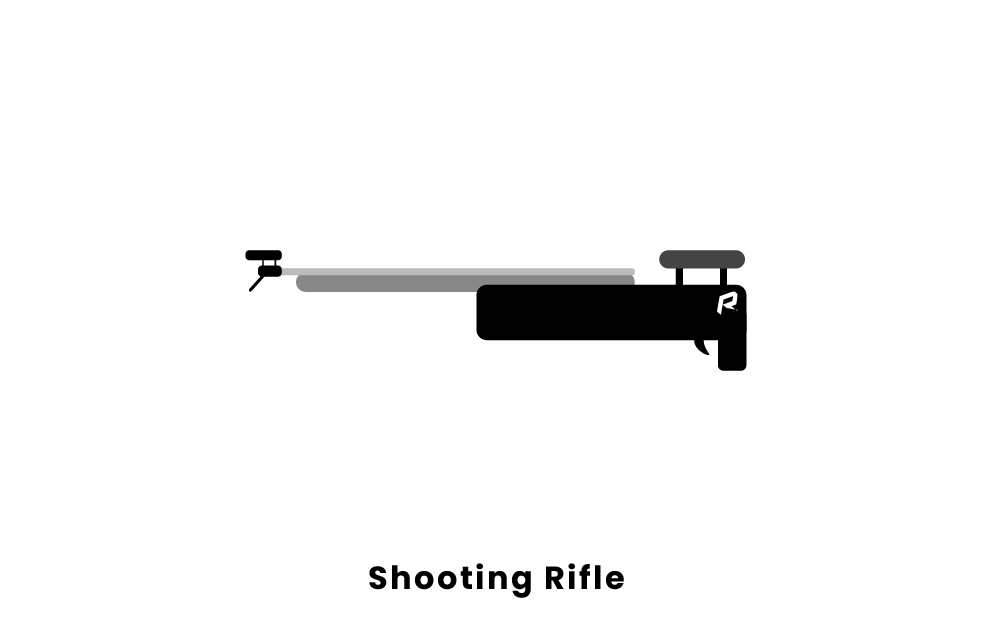 Rifle shooting events take place in a shooting range, and feature athletes aiming at targets on the wall. The target is composed of ten concentric circles, and point values per shot increase the closer the shot is to the center.

The 10m air rifle event is open to men and women and shots are fired in the standing position. In the qualifying rounds, each competitor fires 60 shots and the top eight highest combined scores move on to the final. The final round features an elimination style where the lowest scoring competitors are eliminated as the final round progresses. This means the gold medal will come down to the final shots between only two athletes.

The 50m event open to men and women is unique because shots are fired from the standing, kneeling, and prone position. The event features a single load rifle and a slightly bigger target compared to the 10m discipline. Men shoot 40 shots while women shoot 20 shots at each position during the qualification round. Top eight scores move on to the elimination style final round with 15 shots at each position for both men and women.

Athletes are only allowed to aim with one hand in pistol while shooting at targets on the wall in pistol events. All pistol events take place indoors in shooting ranges. There are three different distances that feature a variety of fire rates.

The 10m air pistol event is open to both men and women. In the qualifying round, athletes fire 60 shots and the top eight scores advance to the finals. The finals utilizes the same elimination style method as the rifle event.

The 25m discipline has a different format for both men and women. In the men's qualification rounds, contestants fire six series of five shots each in rapid fire momentum. There are two qualifying rounds of 30 shots each, and the top eight contestants advance to the elimination style finals.

For the women in the 25m pistol format, the first qualifying round is a test of precision. Athletes fire 30 single shots at the target. The second qualifying round is similar to the men's division where contestants shoot 30 rapid fire shots. The top eight combined scores move on to the elimentaton style finals.

The 50m pistol event is only open to male competitors in the Olympic games. The 50m event is identical to the 10m competition style with competitors given 60 qualification shots. Top eight contestants are granted 20 shots to compete in the elimination style final round. 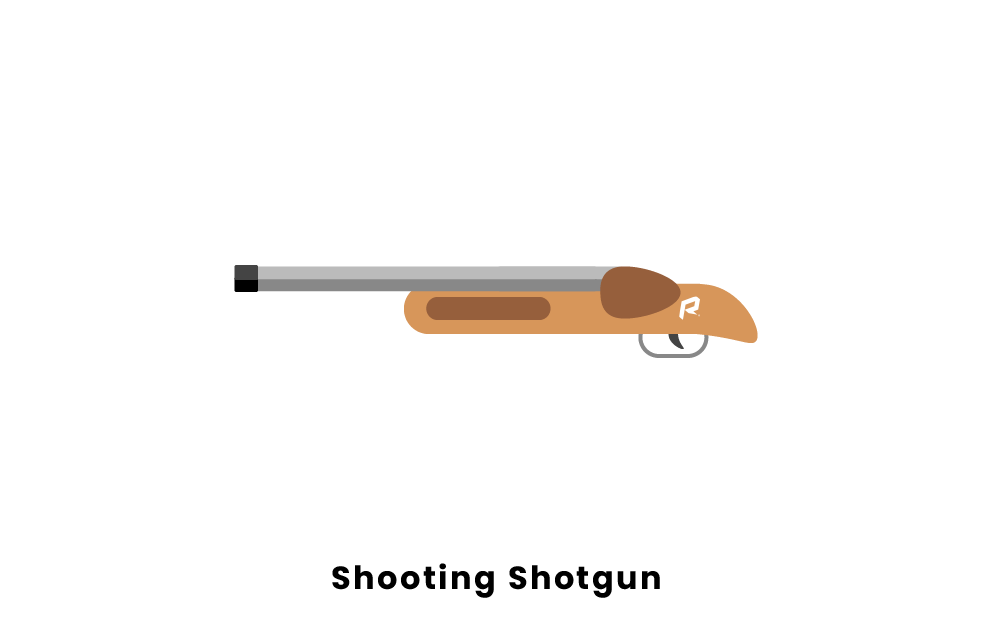 There two different shotgun events, trap and skeet, and both events are available to men and women. Shotgun events are different because they take place outdoors so weather can affect the competition. Also, the targets are moving clay discs that are launched into the air.

For the trap event, competitors do not know the direction or the angle of the target. Athletes are allowed to shoot two shots per target. In qualifiers, the men have 5 rounds and the women have 3 rounds of 25 targets each. The six best scores move on to a single final round of 25 discs.

In the skeet event, competitors know the angle and direction of the disc targets beforehand. Athletes are therefore only allowed to take one shot at each moving target. The format for the skeet qualifying rounds works the same as the trap event. In qualifying rounds, discs may be launched either one or two at a time. The finals features the six best contestants who are awarded 25 shots each.

How big is the shooting target?

The shooting target in both the rifle and pistol competitions are ten concentric circles that vary in diameter depending on the distance and discipline. For rifle competitions, the rings of the circles have a diameter about the size of a dime. The 10m air rifle competition features a center target circle with a 0.5mm diameter. In comparison, 0.5mm is roughly the size of a pencil tip. Pistol events have a larger target to comply with the rapid fire regulations.

What type of scopes are allowed?

The type of scopes allowed depends on the type of gun being used in the event. For all pistol and shotgun events, open sights are the only allowed scopes. Open sights are little tips on top of the barrel that help a shooter align their shot. Metallic scopes are allowed in the rifle events. These scopes provide a competitor with crosshairs that provide precision aiming assistance. Athletes will align the crosshairs up with their targeting prior to firing.

How does elimination style work in the final round?

The final rounds in both pistol and rifle events utilize an elimination style format where the competitors with the lowest scores are subsequently eliminated from competing as the round progresses. Depending on the length of the event, after a select number of shots have been fired by each finalist, the two lowest scoring competitors will be removed from the event. This style of competition creates a very dramatic final round with only two athletes remaining.

How does scoring work in the rifle events?

Scoring in the rifle events depends on the distance of the event. For the 50m events, athletes are given points based on an integer scale out of 10. For a single shot, the highest score a competitor can receive is 10 points. In the 10m air rifle event, the scoring system is based on a decimal scale. The highest point total an athlete can receive for a single shot is 10.9 points. The next lowest score decreases by 0.1 decimal points all the way down to 0.0.

Pages Related to What are the rules of shooting?