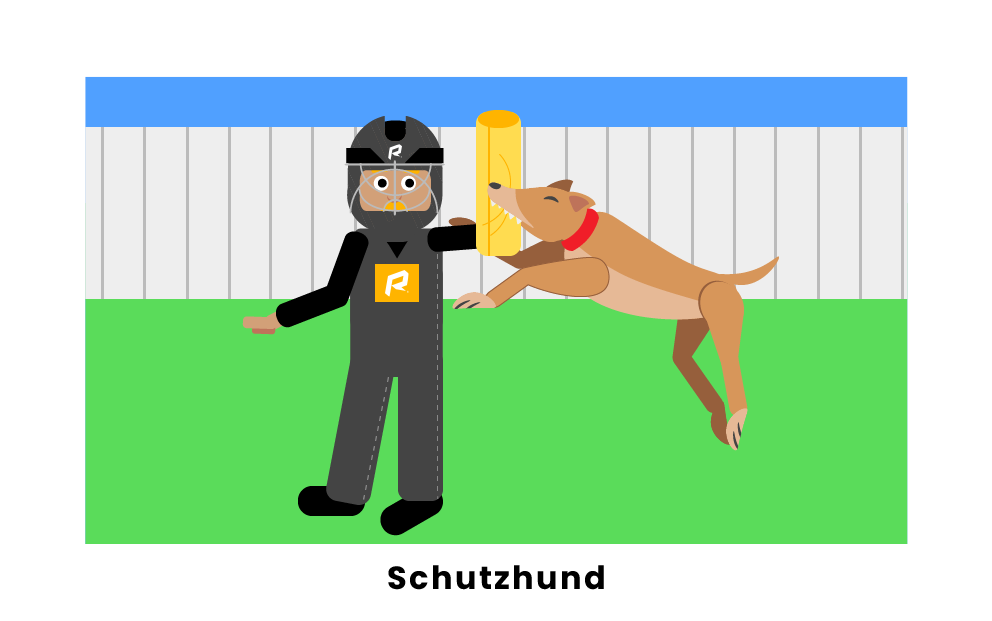 Schutzhund is a sport that develops and evaluates the training and behavior of dogs. “Schutzhund” is a German word meaning “protection dog,” and the name of the sport originates from the primary breed which participates in schutzhund: the German Shepherd. Max von Stephanitz, the inventor of the German Shepherd breed, founded the Verein für Deutsche Schäferhunde (SV), which translates to “German Shepherd Association,” in 1899. Two years later, in 1901, the first schutzhund trials were held in Germany. Since then, the sport has spread to America and other countries around the world. Schutzhund events are managed by various organizations, such as the United Schutzhund Clubs of America (USCA) and the German Shepherd Dog Club of America (GSCDA).

Schutzhund, which as of 2021 is also known as IGP (Internationale Gebrauchshundeprüfung), tests three distinct areas of a dog’s training and behavior. First, it tests tracking, requiring a dog to track footprints over mixed terrain, change direction, and show accuracy and commitment to tracking. The tracking phase also tests the dog’s ability to find dropped objects and indicate them to its owner.

The second area tested is obedience, which judges the dog’s performance at tasks like heeling, sitting, standing, and lying down on command. Also tested are the dog’s ability to obey under a firing gun, retrieve a dumbbell, perform jumps, and complete other tasks such as down stays and long send-aways. Finally, the third phase of the test examines the dog’s protective skills by having it “attack” a target intruder who is wearing heavy padding. This test judges the dog’s ability to protect and whether they will immediately release the target when commanded.

Schutzhund, also known as IGP, is a dog sport that tests three crucial areas of a dog’s behavior: tracking, obedience, and protection. Schutzhund originated in Germany and was originally used to judge the skills of the newly-created German Shepherd breed. Since then, it has become a popular sport throughout Europe and America. Various yearly competitions are held worldwide, including the annual BSP (Bundessiegerprüfung) in Germany and the WUSV (Welt-Union der Vereine für Deutsche Schäferhunde), which is held in various participating countries across the globe.

What are the best breeds for schutzhund?

There are a number of different breeds of dog that can participate in schutzhund. The sport was initially developed with the German Shepherd breed in mind, but many others have shown ability in the sport. These breeds include the Beauceron, the Belgian Malinois, the Belgian Tervueren, the Bouvier de Flandres, Boxers, Briards, Dobermans, Dutch Shepherds, Giant Schnauzers, Rottweilers, and others. There have even been some rather unusual breeds involved in schutzhund, such as the Airedale Terrier, the American Bulldog, the American Pit Bull Terrier, the American Staffordshire Terrier, the Cane Corso Italiano, and the Hovawart.  Mixed breeds are also eligible for many schutzhund trials.

What equipment do I need to safely participate in schutzhund?

There are a number of essential pieces of equipment required to safely participate in schutzhund. One of the most important is the dog bite sleeve, a thick, padded sleeve worn over one arm by the trainer’s assistant during the protection test. The sleeve is worn to protect the assistant, who spurs the dog to bite their arm during the test. Other equipment required for schutzhund includes training lines, which are leashes of varying length; gripper lines, which are used for tracking; wooden dumbbells for retrieving; a jumping bar for the dogs to jump over; a nylon apron for the trainers’ protection; and tracking articles, which are used to judge the dog’s skill at marking dropped items during a track.