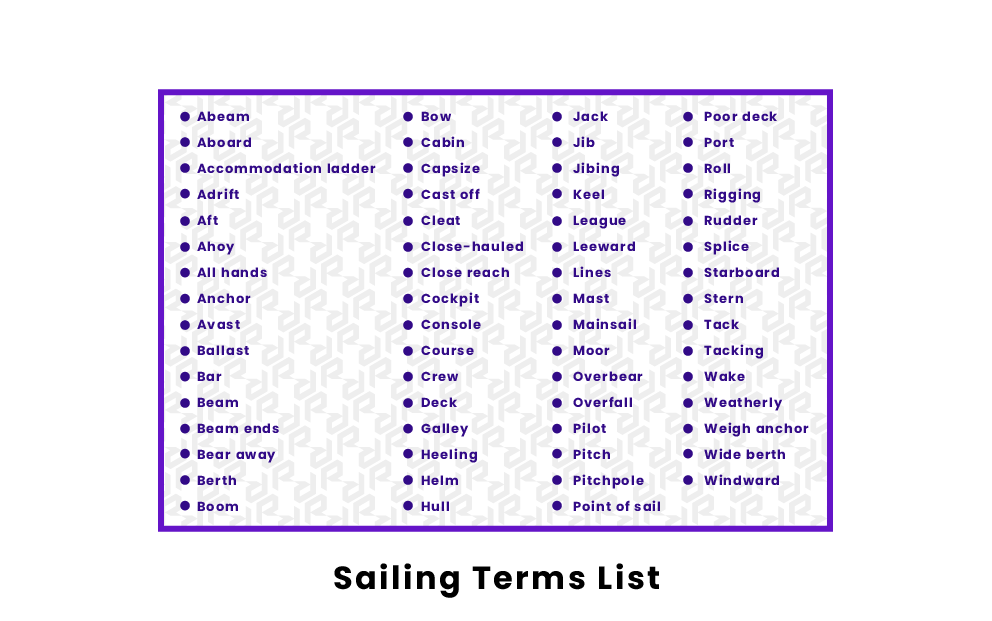 Members of the sailing community communicate with each other in a language filled with technical terms and jargon. Becoming familiar with the vocabulary of a sailor can seem like a daunting task, but this glossary of terms will have you speaking like a seaman in no time.

Abeam: Off to the side of a boat at right angles to the vessel's centerline.

Aboard: On or in a vessel. Close aboard is a term used to indicate being near a ship.

Accommodation ladder: A portable flight of stairs that can be placed on the side of a vessel to allow access.

Adrift: Afloat and unattached to the shore or seabed. The term 'adrift' implies that a boat is not anchored and not under control, meaning that it will drift according to the wind's direction. This word can also be used to describe any gear not fastened down or stored properly.

Aft: Used to describe anything located toward the back of the ship, which is also known as the stern. Anything toward the stern is referred to as 'aft' or 'astern'.

Ahoy: A phrase used to draw attention. This phrase can be used to hail a nearby vessel.

All hands: Refers to the entire ship's company, including officers and enlisted personnel.

Anchor: A method of docking the boat to prevent it from drifting away while not in use. The anchor is a chain with a weighted hook that grips the sea floor and keeps the boat stationary.

Avast: Stop! This is a phrase used to command that something cease being done.

Ballast: Weight in the form of water, metal, or stone placed low in the hull to improve the boat's stability and performance.

Bar: A large mass of sand formed by the surge of the sea. Bars are usually located at the entrances of rivers or bays and often prove problematic to navigate. Although they can be treacherous to cross, bars usually indicate that more tranquil waters lie ahead.

Beam: The boat's width at the widest point. The term 'beam' may also be used to refer to the mid-point alongside the ship.

Beam ends: Refers to the sides of a vessel. The phrase 'on her beam ends' is used to indicate that a vessel is listing over 45 degrees or that the vessel is on its side and close to capsizing.

Bear away: To turn away from the wind. The phrase 'bear down' is synonymous with this expression.

Berth: Either a bed aboard a vessel or a space in a port or harbor where a vessel can be tied up and secured to the shore.

Boom:The pole that extends from the bottom of the mast horizontally. Adjusting the boom towards the wind allows the sailboat to harness wind power and move either forward or backward.

Bow: The front of the vessel. Anything located at or near the bow is referred to as being 'forward'.

Cabin: A room inside the boat. The term 'cabin' can be used to refer to either a single room for sleeping or the entire interior of the boat.

Capsize: When a ship lists too far to one side and rolls over, exposing the keel. Large vessels that capsize often sink.

Cast off: To untie the boat's line and let it go.

Cleat: A fitting, usually made of wood, plastic, or metal, where a line can be secured.

Close-hauled: Sailing on the wind as close as possible.

Close reach: Sailing with the wind forward of the beam. When sailing close reach, the bow is positioned approximately 60 degrees from the eye of the wind.

Cockpit: A somewhat enclosed space on the deck, usually where the boat is steered.

Console: A raised structure on the deck that typically houses the helm or steering station. Consoles may also contain a toilet or stowage space.

Course: The direction a boat is steered to reach a destination. Course can also refer to the angle at which a boat is sailing in relation to the wind.

Crew: The sailors aboard the vessel that help the captain sail the boat.

Deck: The exterior flat surface of a vessel.

Galley: The boat's kitchen, which may be located either inside the boat or outside on the deck.

Heeling: When a sailboat is pushed from the side by the wind and leans over into the water.

Helm: Where the boat is steered. On large boats this is usually a big wheel, but on smaller boats it can be a tiller. Either the wheel or the tiller is used to control the boat's rudder.

Hull: The shell and framework of the flotation-oriented section of the vessel.

Jack: Either a flag or a sailor. Traditionally flags are talked about as if they are members of the crew. However, a flag is only considered a jack if it is placed at the jackstaff at the bow of a vessel.

Jibing: A sailing maneuver used to change a boat's direction through an oncoming wind. When jibing, the stern of the boat is turned through the wind so that the wind is channeled from one side of the vessel to the other. Jibing is the opposite of tacking, but jibing is a less common technique because it involves turning the vessel directly into the wind.

Keel: Sometimes referred to as the centerboard, this is a long, heavy fin located on the bottom of the boat. The keel extends into the water below and provides stability. Keels are the reason why modern sailboats are almost impossible to capsize.

Leeward: Sometimes shortened to lee, this is the direction opposite to the way the wind is blowing.

Lines: Another word for ropes, which are used to hoist sails.

Mast: The vertical pole on a vessel that supports sails or rigging.

Mainsail: The boat's largest and most important sail. The mainsail is a large, triangular sail located just aft of the boat's mast. The boom runs along the mainsail's bottom edge.

Moor: To attach a boat to a mooring post so that it remains stationary. This phrase is synonymous with the expression 'dock the ship'.

Overbear: To sail directly downwind at another ship and steal the wind from its sails.

Overfall: Treacherously steep and breaking waves caused by opposing currents and wind in a shallow area.

Pilot: A navigator who has the knowledge and experience to navigate a vessel through difficult waters.

Pitch: A vessel's motion in relation to its beam (side to side) axis.

Pitchpole: To capsize a vessel end over end rather than rolling over on one of its sides.

Poop deck: A deck on the aft superstructure of a large ship.

Port: The left side of the boat when you're facing the bow.

Roll: A boat's motion in relation to its fore to aft (front to back) axis. List is a lasting tilt in the roll direction.

Rigging: The system of masts and lines aboard a vessel.

Rudder: Located underneath the vessel, the rudder is a flat piece of wood, fiberglass, or metal used to steer the boat. The rudder is controlled either by a wheel or tiller.

Splice: To join lines by unravelling their ends and connecting them to form a continuous line.

Starboard: The right side of the boat when facing the bow.

Stern: The back of the boat.

Tacking: A basic sailing maneuver used to change a boat's direction through an oncoming wind. When tacking, the bow of the boat is turned through the wind so that the wind is channeled from one side of the vessel to the other. Tacking is the opposite of jibing.

Weatherly: A boat that is easily sailed and maneuvered.

Weigh anchor: To remove an anchor from the water prior to sailing.