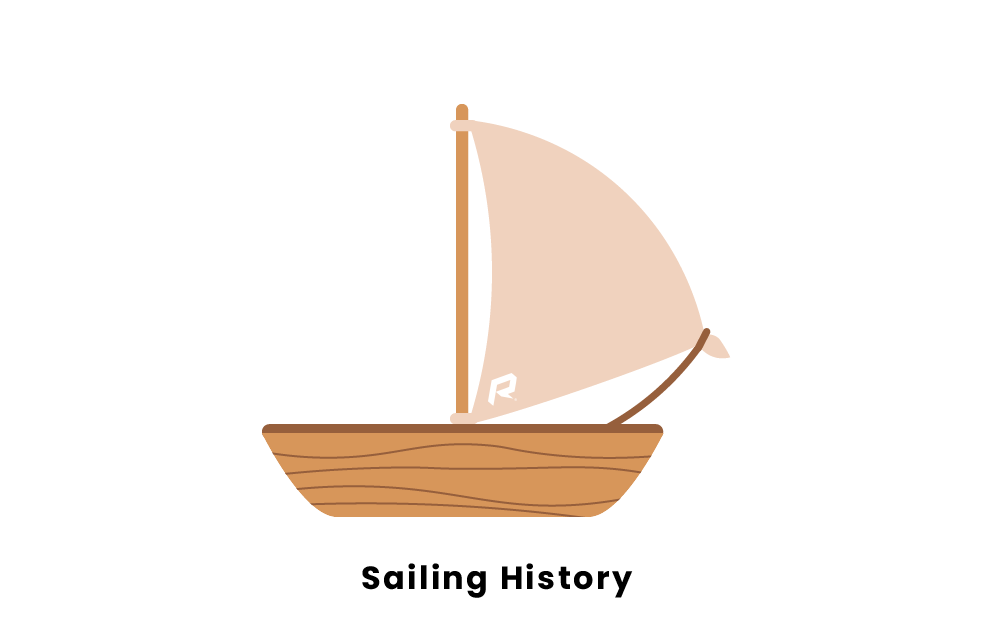 The Dutch are credited in developing modern sailing with the invention of the yacht. They originally used small, fast boats to chase pirates and criminals. To celebrate their returning ships, rich merchants would sail out on their "jaghts." It then turned into a common practice to take your friends out on your jaght for leisure.

Charles II of England was exiled to 10 years in Holland before returning to his throne in 1660. His return sparked a celebration, and he was gifted a 60' yacht by the city of Amsterdam. He became so fond of the pastime of sailing, that he eventually built 20 yachts during his lifetime.

The origins of sailing are still highly debated today, but it is believed that the earliest evidence of sailing can be found all around the Persian Gulf and Mediterranean Sea.

Scientists have found, through archeological evidence, that Kuwait has the earliest remains of sea-going boats (5,000-6,000 BCE). These boats were used in a trading network between southern Mesopotamia and the Gulf, however it is not the oldest known ocean trading network. This belonged to the 7,000 BCE obsidian trade routes of the Aegean Sea.

The Meditarranean and Aegean Seas are where the Greeks, Romans, and Egyptians set sail. Their ships were mainly used for travel, fishing, trade, and even war.

These ancient civilizations most likely used a square rigger, which is a ship with a square sail. This allowed the wind to push on the sail from the back so it can propel the ship forward.

Sailing became an official sport when a 40 mile race between Charles II and the Duke of York took place on the River Thames in 1661. Charles used his new yacht Katherine, while Duke used his yacht Anne. Charles ended up winning and this was the first organized regatta that was recorded in human history.

At first, the sport was mainly for kings, but as it grew it reached the extremely wealthy in the 1800s and yacht clubs began forming. In 1720, the Cork Water Club of Ireland became the first yacht club in the world, then it was Lough Ree Yacht Club of Ireland in 1770, and the Starcross Yacht Club of England in 1772. The sport eventually made its way to America when the New York Yacht Club was founded in 1844. John Cox Stevens, the founder, and eight of his friends planned on creating a yacht and taking her to England to compete in races, and they built a Pilot style Schooner, which was the fastest boat at the time. This was the start of international racing. With this 101 foot boat, they sailed to England in 1851 and won the Hundred Guineas Cup.

Sailing started to become popular after the first yacht club formed in 1770. However, its popularity really boosted when it was introduced to the 1900 Olympic Games in Paris. After this, technology started to develop, and people started to make smaller and lighter crafts.

Here is a list of countries that sailing is most popular in:

Pages Related to History Of Sailing