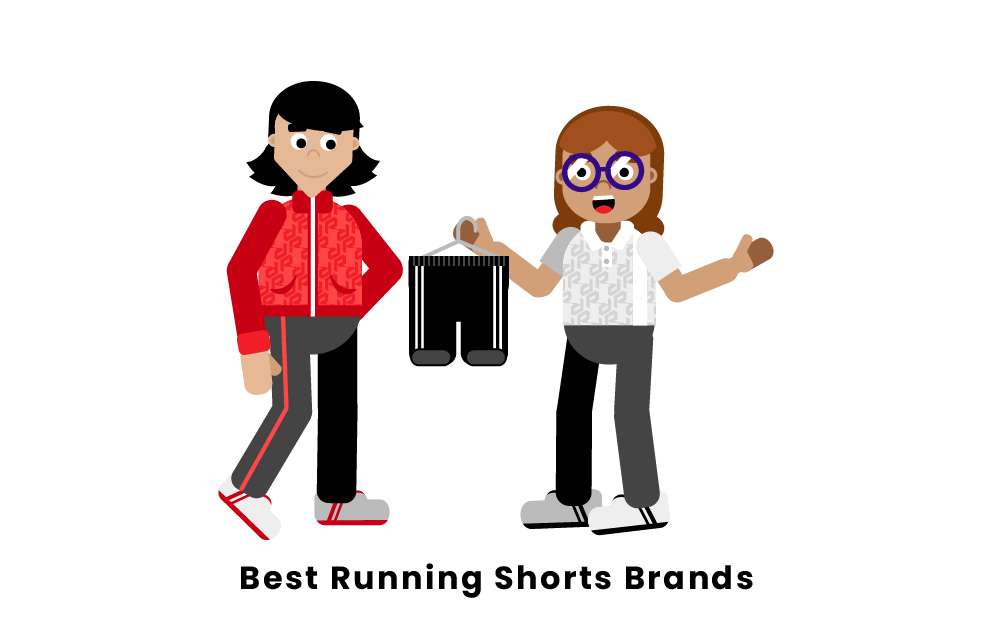 Whether an avid runner or not, almost everyone has a pair of running shorts in their closet. They are something that we all use, either for exercise or leisure. However, for those who are runners, there are clear differences between the brands that produce these products. Below are the top six best running shorts brands.

What are the most popular running shorts brands?

Nike is the world's largest athletic apparel brand and is best known for its footwear, clothing, and sports equipment. The company first originated in 1964 and was previously named Blue Ribbon Sports, until 1971 when they changed their company name to Nike, after the Greek goddess of victory. They sell apparel through the Nike brand as well as through subsidiary brands Jordan and Converse. Their shorts are designed with an array of different materials, including natural fabrics like cotton and bamboo, to synthetics such as nylon, elastane, and polyester. They also make Dri-FIT, Flex stride, and AeroSwift shorts which each feature patented technologies designed to maximize moisture control, flexibility, and breathability.

Adidas is well known for selling athletic shoes, apparel, and sporting equipment. In the early 21st century, Adidas was the highest-grossing athletic brand in all of Europe and the second-largest athletic apparel brand in the world, only behind their biggest competition, Nike. The brand has been around since the early 1900s, as their founder Adi Dassler began producing sports apparel out of his mother’s kitchen in 1924. Adidas shorts are primarily made of breathable fabric, designed with an elastic waistband and sleek fit to help reduce friction, whether you're on the track, treadmill, or trails.

While the brand mainly sells athletic apparel, shoes, and equipment, they also sell casual clothing and footwear for the everyday person. Adidas sponsors over 100 high-profile Division I universities such as Kansas, Louisville, and Miami, to name a few of them. Adidas also collaborates with many high-profile celebrities like Kanye West, Beyonce, and Pharell Williams. Some of the most well-known athletes sponsored by Adidas are Damian Lillard, Trae Young, Donovan Mitchell, James Harden. Adidas also sponsors popular track athletes, such as notable runner and coach Nell Rojas.

New Balance is an independent athletic brand that has been around for over 100 years, mainly selling athletic shoes, apparel, and equipment. Originally named New Balance Arch Support Company, the brand was first created back in 1906 by William J. Riley in Boston, Massachusetts. The brand initially specialized in athletic shoes and apparel, but it began selling more casual footwear and clothing as the company grew. New Balance running shorts are made with NB DRY technology that eliminates moisture and offers maximum comfort.

New Balance has a company partnership with the NBA that allows them to create authentic marketing content featuring New Balance-sponsored athletes in their respective NBA uniforms and team logos. New Balance also has a partnership with Boston College that makes the brand the official apparel sponsor of 30 out of 31 of the college’s athletic teams. New Balance sponsors major athletes like Kawhi Leonard, Coco Gauff, Rose Lavell, and Jose Altuve.

Brooks is a well-known athletic brand that primarily sells high-quality running shoes, but also provides athletic apparel for men and women. The brand was created back in 1914 by John Brooks Goldenberg after he purchased the Quaker Shoe Company, a bathing shoe and ballet slipper manufacturer. In 1920, the company renamed itself Brooks Shoe Manufacturing Co., Inc., and sold shoes under the brand name Bruxshu. While they continued making ballet and bathing shoes, they also began making baseball and American football cleats. However, today the company has rebranded to sell running shoes and apparel.

Brooks running shorts are made for devoted runners. Brook’s Sherpa 3 and Sherpa 5 are great options for runners that want ventilation for their legs, along with loose-fitting shorts that include brief liners. Brooks currently has partnerships with P3R, a Pittsburgh-based running club, and International Front Runners, another running-focused brand. They also sponsor some of the best track athletes in the world like Des Linden, CJ Albertson, and Keith and Kevin Hanson.

Under Armour is the originator of performance apparel gear meant to help keep athletes cool, dry, and comfortable throughout athletic activities. Under Armour also makes athletic shoes and equipment in addition to their high-quality clothing. The company was created in Georgetown by a former University of Maryland football player named Kevin Plank in 1996. Two years later, he moved the company’s base of operations to Baltimore, Maryland, where they have been based for nearly 30 years.

Under Armour makes a variety of different types of athletic shorts, as well as casual wear. Their shorts are made with ultra-light, breathable fabric and have pockets for stashing your belongings. Some of their shorts also have UA Speedpocket built into the waistband to keep your phone secure, with no bouncing. Under Armour has major partnerships with companies like Samsung and JBL in technology innovation. Under Armour also partners with major sports leagues like the NBA to keep their relevance in the world of professional sports. Under Armour also sponsors some of the most well-known athletes on the planet, like Stephen Curry, Joel Embiid, and Justin Jefferson. They also sponsor popular runners, including Olympic athlete Natasha Hastings.

Lululemon is a technical athletic apparel company for yoga, running, and training of any high-level performance that will make a person sweat. The company was created by Chip Wilson in Vancouver, Canada, in 1998. Lululemon’s first store was dual-purpose, being used as a design studio during the day and a yoga studio at night. Since then, Lululemon has developed significantly and is constantly making strategic partnerships with different brands that resonate with their company slogan of consumers living their “best lives.”

Lululemon shorts are made with the company's patented Nulu fabric. The fabric helps to conceal sweat and can be worn for a wide range of activities, including running, yoga, and HIIT. They partner with companies like Canopy, Sustainable Apparel Coalition, and the American Apparel and Footwear Association. Lululemon also has a ton of athlete sponsors such as NBA players Kyle O’ Quinn and Jordan Clarkson, along with Marathon runners like Matt James and Charlie Dark.