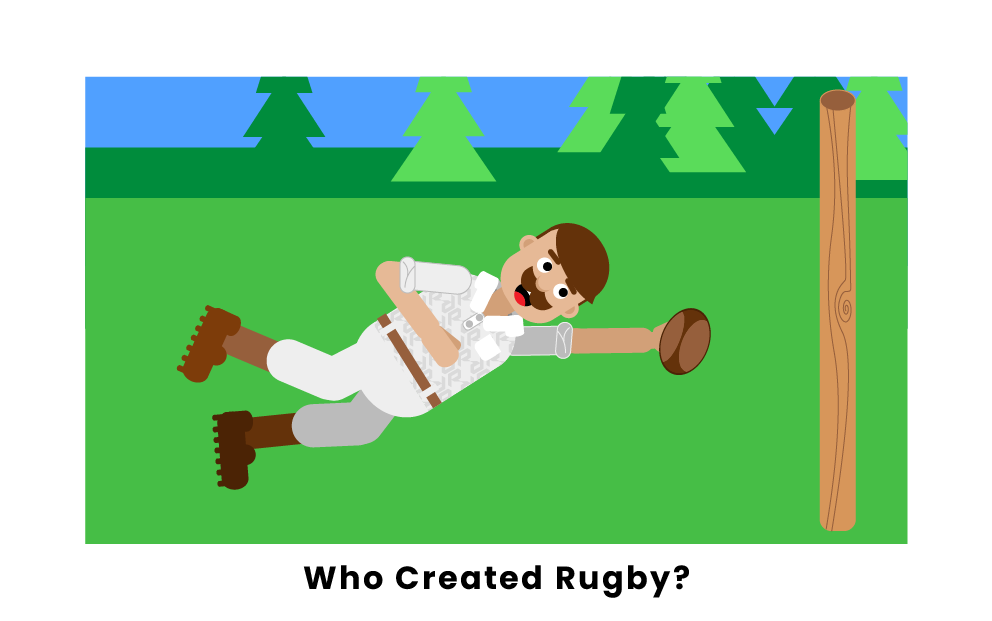 Have you ever wondered who created rugby? Rugby is a popular team sport, especially in the English-speaking world. Played by men’s and women’s teams of all ages, rugby has spread from its native England to Australia, New Zealand, South Africa, and France, then throughout Europe, North America, and Asia. Read on to find out more about its creator and the origins of the sport.

Football (commonly known as soccer in the United States) games have been played in England since the early first century BCE. In the fourteenth century, community football matchups were formed as annual traditions, and by the nineteenth century, football sports were a significant part of British culture. In 1823 Thomas Arnold assumed the role of headmaster at Rugby School, a boarding school for teenagers in Rugby, Warwickshire, England. He began encouraging his students to participate in sports, notably football.

At Rugby School in the first year of Arnold’s tenure, student William Webb Ellis first picked up a football during a game and ran with it toward the goal line. Although this was against the football rules of the time, which required the ball to be dropped and advanced with the feet, this action is credited as the first instance of a person playing rugby.

Three students at Rugby School published the first set of written rules in 1845. They became established as the official Rugby School Laws of Football the following year. Cambridge University published the Cambridge Rules in 1848, which included rules similar to rugby. Other schools, such as Eton, maintained their own football rules as well.

In 1871 the Rugby Football Union (RFU) was formed by former members of the Football Association (FA) as the governing body of rugby. Led by Blackheath Club, the RFU established universal Laws of Football that allowed running with the ball in hand and tackling, practices which were prohibited in FA-sanctioned football matches.

The first international rugby match was played at Raeburn Place in Edinburgh, Scotland, on March 27, 1871. Played between national teams from England and Scotland, the game had the distinction of being the first international football match of any rules format. Scotland won the match, scoring two tries and a goal, while England scored a single try.

In 1895 a group of 20 English rugby teams from the Cheshire, Lancashire, and Yorkshire regions collectively departed from the RFU and formed the Northern Rugby Football Union. Their decision to leave stemmed from a dispute over whether to pay players for lost time at work as a result of playing rugby.

Although rules of the game did not play a part in the initial decision to split, the Northern Rugby Football Union (which changed its name to the Rugby Football League in 1922) gradually adopted its own code of rules that came to be known as “rugby league.” The rugby league rules promoted matches with faster action than the traditional game still played in the RFU, called “rugby union.” Confusingly, both the rugby union and rugby league codes of rules are commonly referred to simply as “rugby” in most countries in which the sports are played.

Who is the inventor of rugby?

William Webb Ellis is the inventor of rugby. He was a student at Rugby School, an English preparatory school for teenage boys when he invented rugby during a school football match in 1823. Just that year, Thomas Arnold had taken over the role of headmaster at Rugby School. His increased emphasis on game playing, particularly sports, was certainly instrumental in providing Ellis the opportunity to create the new sport of rugby. Some historians question the accuracy of the creation story; nonetheless, Ellis is widely acknowledged as rugby's founder.

Where did rugby originally come from?

Rugby originally came from Rugby School, located in the town of Rugby, in Warwickshire, England. Still operating today, Rugby School was a public preparatory school for boys that started playing football by their own unique set of rules in 1823. This was not uncommon, as other schools such as Cambridge and Eton developed their own distinctive styles of football around the same time. Written rules for rugby also originated at the school, when three Rugby School students wrote the first Laws of Football for rugby football in 1845.

How was rugby invented?

Rugby was invented when a student at Rugby School named William Webb Ellis broke the rules during a football match. Although some historians believe the story is questionable at best, Ellis is credited with creating rugby by picking up the ball and running with it toward the goal line. This defied the rules and conventions of the time, but his schoolmates agreed that the ability to carry the ball made the game more enjoyable. So, they began playing a style of football that allowed carrying the ball in the hands and tackling, which became known as rugby football.

Pages Related to Who Created Rugby?