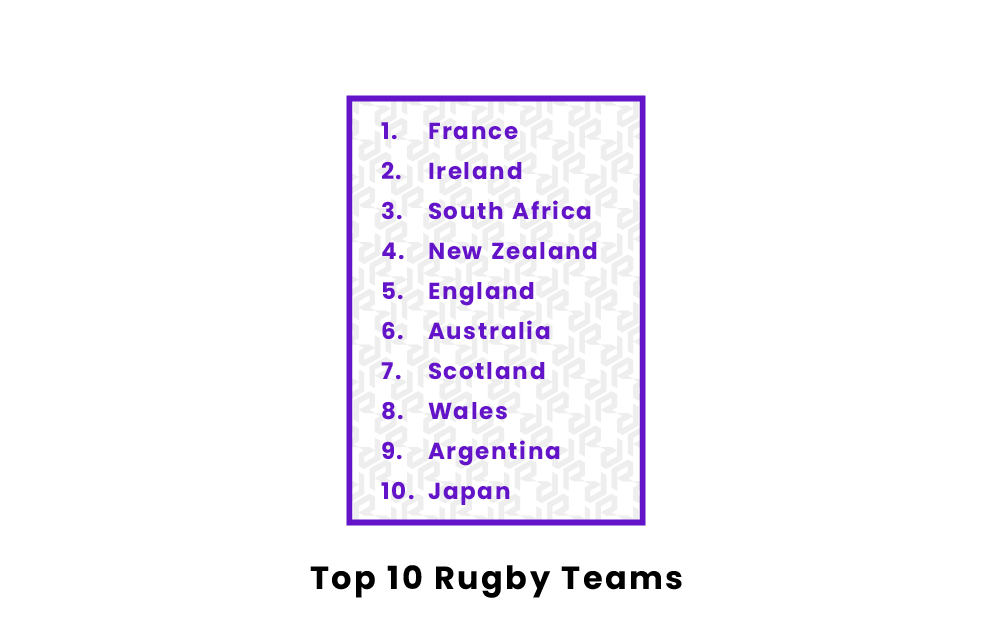 Rugby is one of the most popular sports in Europe and the entire world. Since its inception in the 19th century, this brutal and impressive close-contact sport has amazed spectators and brought endless joy to its fans. This list will highlight the top ten rugby teams worldwide and discuss what has contributed to their success.

Who are the best rugby teams currently?

France's national rugby union is currently the most dominant team in the world. Success and France have gone together since the 1987 inaugural World Cup, where in that and every following tournament, they at least qualified for the knock-out stage. Since the club's first official match in 1906 and their eventual first Five Nations Championship in 1959 against England, they have had no shortage of impressive accolades. France’s remarkable resume includes 29 total Six-Nation Championships, the most wins of all time, 12 Six-Nation Grand Slams, again the most all-time, and are the official third-highest point scoring team of all time in the Rugby World Cup. France's impressive dominance deserves recognition, and their selection as the best rugby team speaks to that sentiment.

Ireland's national rugby union team is one of the most long-standing and well-respected rugby clubs, having sent 11 players to the Rugby Hall of Fame as a testament to their continued dominance. While Ireland has competed at every Rugby World Cup since the tournament's inception, they have never been able to make it past the quarter-finals stage. Ireland's resume over its long history is storied and impressive, winning 14 Six-Nations Championships, achieving three Six-Nations Grand Slams, and earning 12 Six-Nations Triple Crowns. The team has been awe-inspiring over the last few years, as three of their Triple Crown wins have come in the previous four years.

The South African national rugby union team, also referred to as the Springboks, is one of the most prestigious and successful Rugby clubs in all of history. Since its inception in 1891, the club has always been respected, and success seemed to follow them, as evident by their two Rugby World Cup victories; the first of which occurred in 1995 when South Africa defeated New Zealand 15-12, and their second coming in 2007 when South Africa beat England 15-6 for their second World Cup. The Springboks have also managed to field and send 13 members to the Rugby Hall of Fame over the club's existence.

The New Zealand All Blacks are one of the most dominant and successful Rugby clubs that the world has ever seen. Since the Team was first formally recognized in 1903, the club has managed to put together an imposing resume that includes three separate World Cup Wins: against France (29-9) in 1987, again against France (8-7) in 2011, and finally, their most recent win in 2015 against Australia (34-17). Besides the World Cup, New Zealand has also been very successful in the Rugby Championships, where as a team, they have managed to win 18 titles, a record for the competition.

The England National Rugby Union Team was founded in 1871, and since then, they have become one of the biggest powerhouses in Rugby in the Northern Hemisphere. England is the only Northern Hemisphere team to have ever won a World Cup in Rugby, a massive feat that the 2003 team achieved against Australia when they beat them 20-17 in a thrilling and historic victory. England also has an illustrious Six-Nations resume that includes; 29 total overall wins, 13 Grand Slams, and an equally impressive 26 Triple Crowns. The English club team is highly respected, and its history speaks for itself.

The Wallabies, Australia's national rugby union team, has long had ties with success, with 17 team members being inducted into the World Rugby Hall of Fame and over 100 years of success on the field; The Wallabies are undoubtedly one of the top Rugby teams globally. The Wallabies are known for their rivalry with the New Zealand National team, which they compete with annually for the Bledisloe Cup; the Wallabies have won it 49 times. Australia's national rugby union team has had immense success on the world stage, including; being a two-time Rugby World Cup winner (1991 & 1999) and an equally impressive four Rugby Championship titles.

Scotland is one of the best Rugby teams on the international level, and while their World Cup record may not be indicative of this, their other achievements and feats speak to the truth of their skill level. Scotland has been a long-standing member and participant in the Six-nations tournament, and it is there that the team has found most of its success. Scotland has added an impressive 14 total overall wins, 3 Grand Slams, and another 10 Triple Crowns as well. Scotland has also won the Calcutta Cup, a rivalry trophy awarded to the victor of Scotland and England, an impressive 42 times.

The Welsh are some of the best Rugby players, and the Wales national rugby union team is one of the top teams overall; as of 2022, Wales has sent a stunning 19 of its former club members to the Rugby Hall of Fame, a shining example of their continued success. Wales is also a participant in the Six-Nations tournament held between them and the countries of England, France, Ireland, Italy, and Scotland. Wales’s Six-Nations resume includes an awe-inspiring collection of accolades, including; 28 Total Six-Nations Championship Titles, winning 22 Six-Nations Triple Crowns, and 12 Six-Nations Grand Slams. Their impressive resume more than justifies their inclusion on this list.

The Argentinian national rugby union team, commonly referred to as The Pumas, is one of the strongest teams in all of the northern hemisphere and the best team residing in the Americas. The Pumas have just recently joined the Rugby Championships. In 2014, they achieved their first Rugby Championship Match victory, an impressive feat considering they have had only three total players inducted into the Rugby Hall of Fame. The Pumas have appeared in the Rugby World Cup on nine separate occasions, with their best result being a third place finish achieved during the 2007 Rugby World Cup.

Japan has been a force to be reckoned with in the Rugby world; the Brave Blossoms, as the Japanese national rugby union team commonly goes by, have been a part of every Rugby World Cup despite never advancing past the Quarter-finals. Yet this minor blemish on their otherwise impeccable team resume should not allow their accolades to go overlooked. The Brave Blossoms still have managed to win an astounding 25 out of 30 possible Asia Rugby Championships, a record for most of all time, and also became World Rugby Pacific Nations Cup Winners on three separate occasions.

These 20 rugby teams did not make the top 10 list above, but their achievements are still worthy of note, and they are listed below in alphabetical order.