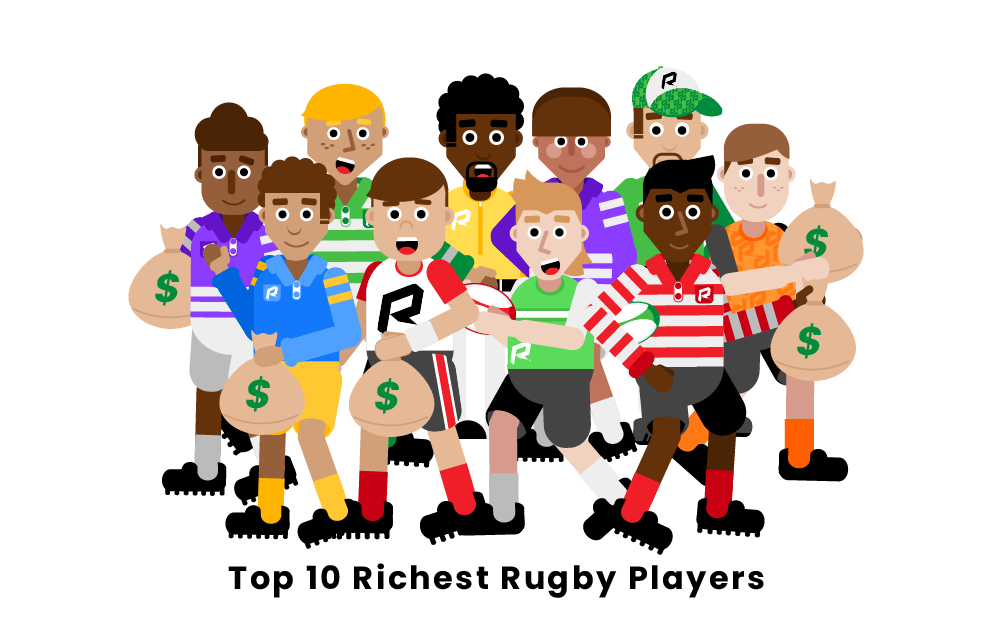 While rugby wages pale in comparison to the massive amount of money that other professional athletes can make, there are some rugby players who have done a great job amassing wealth. Read on to learn about the top ten richest rugby players.

Who are the all time richest rugby players?

Simon McDowell is the richest rugby player in the world, with a net worth of around $54 million. Simon is now retired, but he was an Irish player during his rugby career. Unfortunately, his career was short lived, as Simon was forced to retire in 1990 due to a knee injury. McDowell played for the North Ireland Football Club throughout his entire career before becoming a referee after his professional playing career ended. His high net worth is in large part because he owns a chemical company called Kilwaughter.

Sir Bill Gammell is a former rugby player who has a net worth of more than $50 million. He retired in the late 1980s after an injury ended his career and went on to become a businessman after his retirement. Gammell founded a company called Cairn Energy. This is where Gammell earned most of his fortune over the past twenty plus years. The energy company resides in the global gas and oil industry, became extremely successful in the early 2000s, and was valued at over $10 billion in 2010.

Jonny Wilkinson is easily one of the wealthiest rugby players with a net worth of over $21 million. Although Wikinson is mainly known worldwide for his rugby skills, he is also known for keeping a very clean lifestyle. He did a phenomenal job of saving his salary and avoiding an abundantly lavish lifestyle during his career. Wilkinson has always kept a low profile and has really never been in the press for anything negative. He played Rugby Union, and was one of the only players to earn more than fifteen points per rugby game. After he retired in 2014, he was inducted into the Rugby Hall of Fame.

Sonny Bill Williams is a former rugby player from New Zealand with an estimated net worth of $15 million. Over his professional career, Williams signed a variety of contracts to play Rugby Union and Rugby League. He ultimately moved in a completely different direction to professional boxing. Williams was the first rugby player to ever become a global ambassador for Adidas. Notably, he signed a salary contract for a record $10 million, lasting two years with the Toronto Wolfpack team in the Super League. Most recently, Sonny Bill Williams fought a boxing match against Waikato Falefehi on June 26, 2021. His commitment to capitalizing on his athleticism and monetizing his career through sponsorships has served him well.

Beau Ryan is an Australian rugby player with a net worth of $10 million. Born in New South Wales, Beau was a multi-dimensional player, playing as a wing, fullback, and center at times. In addition to being known for his skills on the field, Ryan is also a singer. In 2014, he released his very first single featuring the Justice Crew. In addition, part of the reason he has such a high net worth is because of the Adidas advertisements in which Ryan has been featured.

Mike Tindall is an English rugby player with an estimated net worth of $5 million. Tindall actually earns his spot on the list because of his wife. Tindall married his wife Zara on July 30th in the year 2011, and they have been together ever since. Zara is known for her equestrian talents, as well as the fact that she is the second eldest grandchild of Queen Elizabeth II of the United Kingdom. Although their fortune does not come from the royal family, together their net worth is over $25 million.

Handre Pollard is a South African rugby player who currently boasts an estimated net worth of $5 million. Tied for the leading money maker in the professional rugby world as of the past year, Pollard makes just under $2 million each year. Handre began making all of his money when he decided to leave the Bulls team and play for Montpellier. Pollard is one of the youngest rugby players on this list and will undoubtedly rise up the rankings soon.

Charles Piutau is a rugby player from New Zealand with a net worth of around $5 million. Piutau is currently tied with Handre Pollard as the highest earner in professional rugby in terms of annual salaries. He currently plays for the Bristol Bears. Charles signed with the Bears in 2018, and that contract made him the first British professional player to make £1 million annually. As of March 2020, it was revealed that both Piutau and Pollard earn just over $2 million each year they play professional rugby.

Maro Itojeis is an English rugby player with an estimated net worth of $1-5 million. Maro currently plays for the Saracens. The team plays competitively in the Premiership Rugby as of 2022. In 2019, Itoje signed a new contract with the team he has played on for over ten years. The contract stated that he would play for the Saracens until at least summer of 2022. Itoje currently has the second-highest annual salary, at slightly more than £800,000.

Owen Farrell is an English rugby player with a reported net worth of around $1.5 million. Farrell plays professionally for Saracens. He makes slightly less annually than his teammate, Itoje, checking in at around £750,000. Farrell has been the captain of the England Rugby team since 2019. He began playing in the league when he was only seventeen, and has continued to earn a name for himself ever since.

Dan Carter is a retired rugby center from Southbridge, New Zealand, with an estimated net worth of 1.1 million euros. Carter is best known for his time with New Zealand’s national team, the All Blacks. Carter was a dominant player on the pitch, winning three Super Rugby titles to go along with nine Tri-Nations and Rugby Championships while playing for the All Blacks. In addition to his spectacular on field performance, Carter also earned a portion of his wealth from publishing his autobiography Dan Carter: The Autobiography of an All Blacks Legend. Carter also has partnerships with companies like MasterCard, Louis Vuitton, and Adidas.

Matt Giteau is a retired rugby back from Sydney, Australia, with an estimated net worth of 1.1 million euros. Giteau was a member of the Australian national team, and also made a name for himself in SuperRugby. A large portion of Matt’s net worth comes from his player salary and endorsements, however he is also a co-owner of Backline Wines winery in Langhorne Creek, Australia.

Aaron Cruden is a New Zealand rugby player who has a reported net worth of around $1.5 million. Cruden currently plays for the Kobelco Kobe Steelers of the Japan Rugby Football Union. He enjoyed most of his success when he played for the Chiefs of the New Zealand Rugby Union. He has also made appearances for the New Zealand All-Blacks.

How much do rugby players make on average per year?

On average, professional rugby players make between $25,000 and $40,000 annually. The amount that each player makes is dependent on a few things. This salary amount is dependent on the league in which the individual athlete plays in, the team they play for, and their overall performance on the field. National team players make on the higher end of that scale, while the very best players in the league can make up to one million dollars each year.

Which rugby player gets paid the most annually?

As of 2022, the highest paid professional rugby players are Handre Pollard and Charles Piutau. The two are currently tied for the highest annual salary in the sport. Each player makes about one million pounds each year they play rugby professionally. Although these are not the top two wealthiest rugby players, they are the two that are still playing in the league currently, and getting paid a record amount for their skills on the pitch.

Are rugby players paid in dollars or euros?

Rugby players are paid based on where their team is located, with players on American teams paid in dollars and those on teams in the euro area paid in euros. This means that the rugby players can get paid in all different currencies. For example, some players might get paid in euros if they play for a team in Ireland, but a player that plays for a British team would get paid in pounds. Of course, the amount of money each player makes can be converted into any currency, including dollar amounts.

How do rugby players make money?

Most professional rugby players make money by earning a salary from their team. Like in other sports, the most popular rugby players make a significant portion of their incomes from endorsement deals. For example, Beau Ryan made a good deal of his net worth based on the Adidas advertisements he was featured in. In some other cases rugby players have also made, and continue to make, money owning businesses or working other jobs.