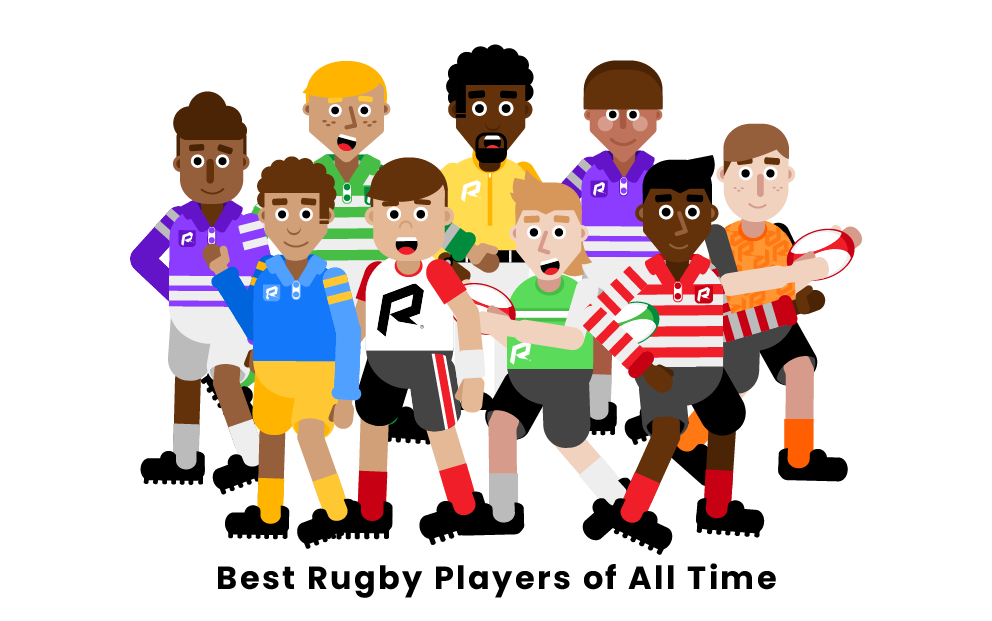 Rugby is a grueling physical sport that requires athletes to be strong, fast, agile, and capable of handling the uniquely-shaped ball. There are successful rugby leagues all over the world, but the biggest stage for the sport is the international stage. With different positions having different responsibilities, it is difficult to compare the greatness of individuals, but certain individuals have been so dominant they set themselves apart. Keep reading below to find out more about the 10 best rugby players of all time.

Who are the best Rugby players of all time?

Richie McCaw is widely considered to be one of the greatest rugby players of all time due to his leadership, toughness, and durability. McCaw played in 148 International Test Matches for his native country of New Zealand, more than anybody else in history. The most impressive part of that feat is that McCaw played in these matches as a flanker, one of the most physically demanding positions in the sport of rugby. Of the 148 matches he played in, his team won 131 of them, meaning they won 85.51% of the games McCaw played in. No player in history has more wins than McCaw, and in fact only four players in rugby history have ever played in as many matches as McCaw has won. McCaw’s longevity allowed him to secure three Player of the Year Awards with his first coming in 2006 with a victory over Dan Carter and the other two coming in 2009 and 2010, making him the only player to ever win the award in consecutive years.

Dan Carter is the highest scoring player in the history of rugby on the international level with 1,598 points. No other player has ever topped 1,500 points, in fact no other player has ever scored more than 1,246 points. To encapsulate his scoring proficiency, Carter has a 352 point lead on the player with the second most points of all-time and a 508 point lead on the player with the third most points of all-time. The New-Zealand born Carter wasn’t just producing empty stats without winning either, as he would win 99 matches over the course of his career. Impressively, those 99 wins would come in only 112 matches, giving Carter a career winning percentage of 88.39%. It comes as no surprise that Carter experienced so much success given that he scored 20 points during his test debut against Wales, a match New Zealand would go on to win 55-3.

Michael Jones is another rugby great born in New Zealand. Jones changed the game of rugby when he was on the field, which unfortunately was always a huge question due to his injury struggles and religious refusal to play on Sundays. Despite that, Jones is widely regarded as one of the greatest players to step on the field due to the extreme manner in which he dominated. Jones played with remarkable speed, strength, physicality, and ball skills, all of which helped him play the flank in a revolutionary way for a dominant New Zealand team. Though his career only consisted of 55 matches, which is not insignificant at that level, he helped New Zealand win 43 of those, giving him a winning percentage of 78.18%. In his very first World Cup match, at the age of 22, Jones scored the first try of the 1987 Rugby World Cup, a fitting start to what would be a legendary career.

Brian O’Driscoll is an Irish legend, and over the course of 16 seasons he produced plenty of reasons for that. O’Driscoll played 141 matches over the course of his career, but only 133 of them came as a member of Ireland as he played the other 8 as a member of Britain. In the 2000 Rugby World Cup Final, O’Driscoll managed to score a hat trick against France, which secured him the international spotlight and the favor of Irish citizens. He would score 250 points on 47 tries, which made him the highest try scorer in Irish history at the time of his retirement. O’Driscoll would be one of the greatest captains in Irish history, leading the team for 83 matches and to their first Grand Slam in over 60 years. In 2006, 2007, and 2009, he won the Six Nations Player of the Tournament Award. In fact, O’Driscoll would even be nominated three times for the World Rugby Player of the Year in 2001, 2002, and 2009.

David Campese is an Australian-born rugby player that revolutionized the game of rugby, while also performing at the highest level. Over the course of his career, Campese would score 315 points on just 64 tries. He utilized his own signature move, the goose-step, to confuse and break down defenses over the course of his career. Campese played a style of rugby that was both exciting, creative, and capable of helping his team score at any moment, but it was also very turnover prone, which made it easy for the opponent to score as well. He helped Australia win the 1991 Rugby World Cup, where he would score 6 tries in as many games on his way to winning Player of the Tournament. Campese was outspoken and well-known for his ability to wage war through spoken word, and it was evident in his first match as he frustrated New Zealand legend Stu Wilson in his very first start ever.

Very few players in the history of rugby, or any sport for that matter, have left as many questions about their potential as Jonah Lomu did. The New Zealand born Lomu is considered to be one of the first true stars of rugby, especially on an international stage, but the brief duration of his career ultimately limits his greatness. In 1994, Lomu made his debut for New Zealand at the age of just 19 years and 45 days, making him the youngest player to ever start a match for New Zealand. Right away he made an impact on the field before returning a year later to the 1995 Rugby World Cup where he would go on to score 7 tries in just 5 matches. The world watched in awe as Lomu dominated opponents with unmatchable speed and power, but that would all come to an end in 1996 when Lomu began to suffer from health problems. He would continue to try and play through the debilitating illness he had, Nephrotic Syndrome, up until his kidney transplant in 2004 and eventual retirement in 2007.

Martin Johnson is a lock who became famous for his excellent play on the field as well as his outstanding leadership with his teams both domestically and internationally. Johnson stepped onto the amateur international scene when he was only 18 years old, but it turns out that it would only take a few years before he was playing professionally. He would develop a reputation as one of the most consistent, dependable players on the field captaining his native country of England to multiple titles and a World Cup Championship in 2003. Johnson won 84 of the 92 matches he participated in during his career giving him a remarkable winning percentage of 91.3%. His leadership abilities might have been his greatest asset, as he toured for the British & Irish Lions three separate times, where he also became the first player in organization history to captain the team on two different tours.

Known for his drive for perfection, it is no surprise that Johnny Wilkinson etched his name among the greats of rugby on the international stage before his career ended. The dominant fly-half had a 13-year career spanning from 1998 to 2011, as he collected 91 wins for England and 6 for the British & Irish Lions. Wilkinson was best known for his ability to make plays and score, which is best encapsulated by his 1,246 career points, which is the second most of all time. His drop-goal abilities helped immortalize Wilkinson when he used them to score the last minute game-winning goal in England’s 2003 World Cup victory over Australia. Over the course of his career, Wilkinson would score 36 drop goals and he currently holds the record for most points scored in the Rugby World Cup with 277, which is 50 more than the next closest player.

Gareth Edwards is one of the most common names thrown around during the discussion of the greatest rugby player ever, and for good reason. This Welsh-born scrum-half combined the physicality and technique of the game in ways that people had never seen before. On the field, Edwards could fire off passes with extreme precision, while also possessing the skills and strength to move to ball the upfield by himself. He made the debut for his 11-year career in 1967 and retired in 1978. During that time period, he would go on to play 53 consecutive matches for Wales as a Cardiff player, score 20 tries in total, and fill the role of captain for 13 tests. He would also win 7 Five Nations Titles and 3 Grand Slams. Edwards also spent a portion of his career playing for the British & Irish Lions, having a major impact on his team from 1971-1974.

Waisele Serevi is a Fijian-born rugby player who had a 21 year career that spanned from 1987-2007. While Serevi excelled in the regular style of fifteens (rugby played with 15 players on the field from each team), he was truly transcendent in sevens, a shortened version of the game that takes place on a smaller field with only 7 players representing each team at a time. Serevi is widely regarded as the best sevens player of all time, having earned himself the nickname “King of Sevens”. He dominated with excellent agility and footwork, which is why he excelled within the smaller playing field. Serevi would play both for the sevens and fifteens teams for Fiji, but his impact on the Fiji sevens team would be far greater than just his play. Serevi would actually coach the Fiji sevens team while also being a player, leading the team to their first World Series Title during the 2005-06 season and then proceeded to maintain the role of coach for several years afterwards.

Who is the best Rugby player of all time?

Although there are several factors that a person could use to determine the greatest rugby player of all time, which could result in many different answers, the most common is Richie McCaw. Not only did McCaw play one of the most physically demanding positions on the field, but he also played in more test matches than any other player in history, starting 148 matches for his home country of New Zealand. On three occasions, McCaw would win World Player of the Year, which is tied for the most all-time.

Who has won the most championships in Rugby?

Pages Related to Top 10 Best Rugby Players of All Time