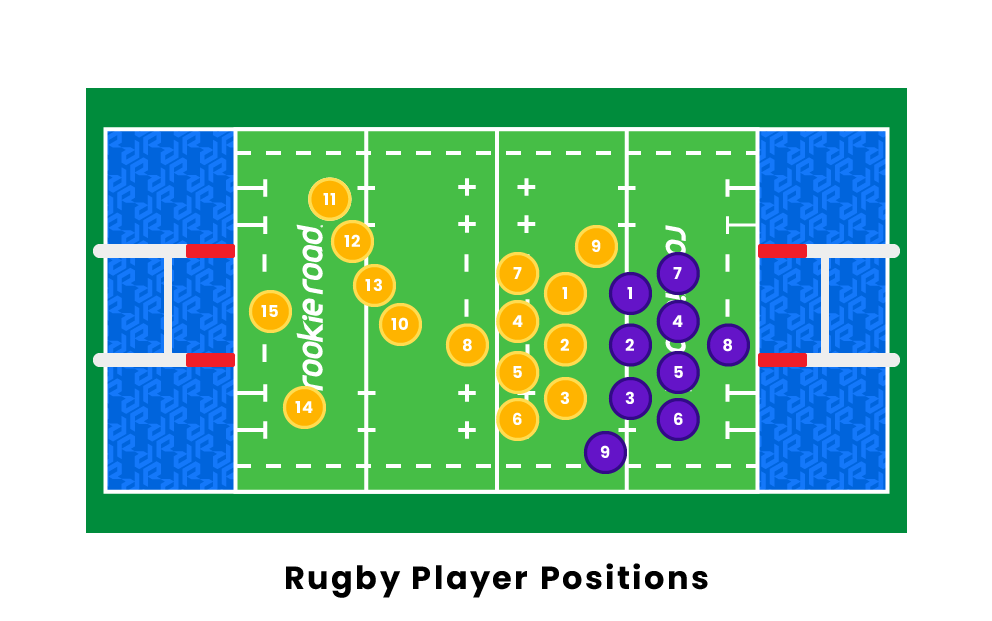 A rugby team consists of 15 players per team, with 30 total players on the field. Each player has a different set of roles and responsibilities. Read on to learn more about each player position in rugby.

What are the positions in rugby? 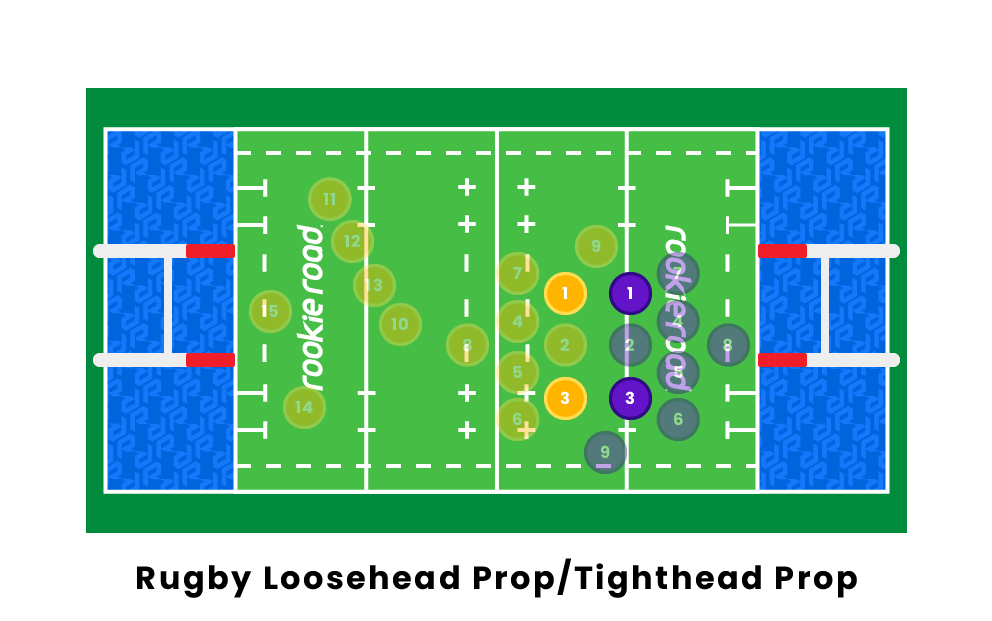 The loosehead and the tighthead prop make up the front row in rugby (called front row for their position in the scrum) along with the hooker. Both props are typically big and strong. They are responsible for making sure their side of the scrum doesn’t move backward, while also supporting the hooker’s body weight and helping him to see and strike the ball better in the scrum.

While both props are in a lineout, they are expected to support and lift the jumper to prevent the other team from getting the ball. Both props are expected to secure the ball if a player is tackled and are used as battering rams in an attack, trying to clear the way for the more athletic players on the pitch.

The hooker lines up in the scrum between the two big props and is the main decision maker for the forwards. The hooker is responsible for coordinating the timing in the scrum for what's happening and is also tasked with gaining possession in the scrum by hooking the ball back through the prop’s legs.

At the lineout, the hooker needs to accurately pass the ball to the lineout jumper. The hooker must also know and be able to successfully make the lineout calls in the match. These calls often involve cadences and codes that dictate when the jumper should be lifted. When there is open play, the hooker acts like the props by securing possession of the ball in mauls and rucks, or they receive short “crash passes.” 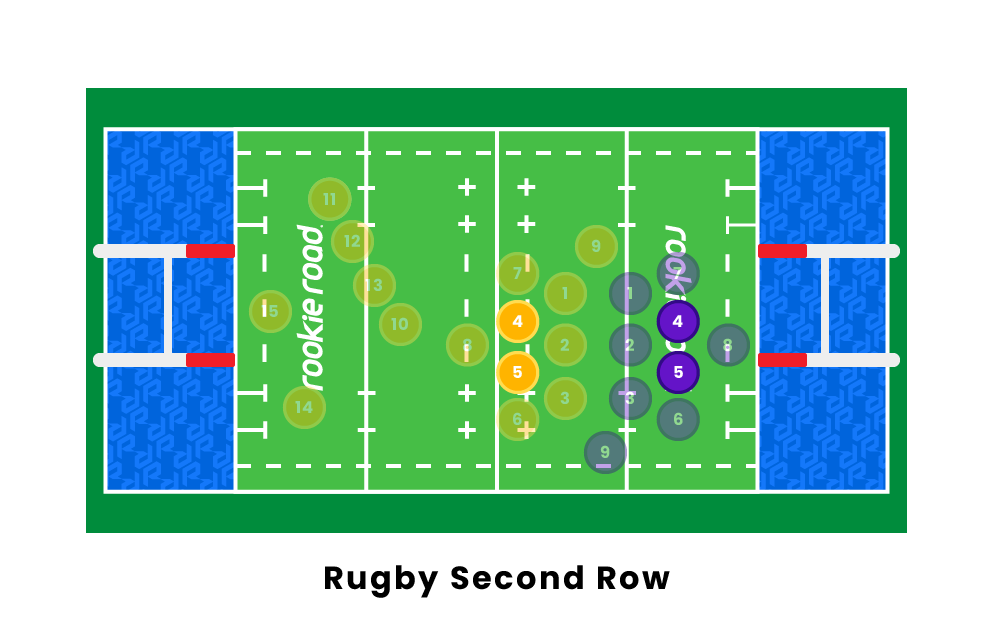 The second row forwards, also known as locks, are referred to as the engine room or main source of power in the scrum. They are the target players in the lineout, which requires them to be tall and powerful, with good scrummaging techniques and exact timing.

The second row needs to make sure to bind tightly to each other and the props in the scrum or else their pack will lose power. They need to be accurate with their lineout jumping or else the opposing team can steal possession. Once they get into open play, the second row players go from being support players at rucks and mauls to ball carriers also. The number 4 position in the second row is normally larger then the number 5 position and usually jumps, and the number 5 position tends to take the ball in the middle of the line out. 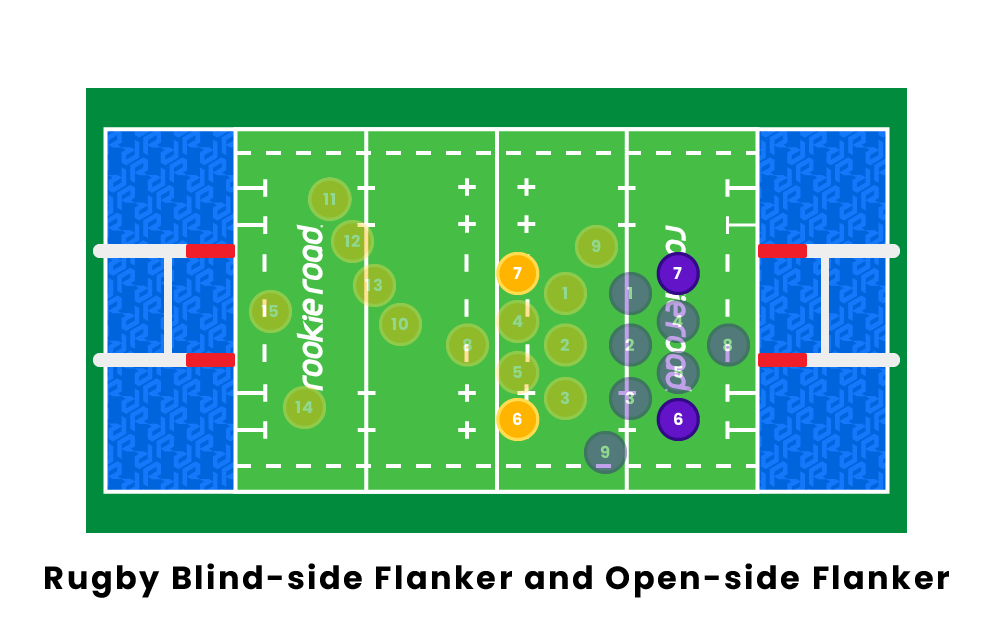 Flankers are the rugby players with the least specific responsibilities in the game, but because of this they are used for a variety of tasks and need to be good at everything. This means they need to be fast, strong, have good tackling skills, and good ball handling skills so that they can make an impact wherever needed.

Both flankers tend to be the most involved in the game because of the multitude of skills they possess. Flankers will do everything including winning the ball in the ruck and mauls, collecting short passes from tackled players, and making tackles in open play.

The open-side flanker plays on the far side of the scrum and tends to be smaller than the blind-side Flanker, allowing them to move more quickly around the pitch. This is because on defense the open-side flanker tries to create turnovers in the split second when the opposing team is tackled and they can take the ball off the ground for their team in the form of poaching the ball off of tackled players on the opposing team. Additionally, on offense, they are expected to be right behind the shoulder of the player with the ball at all times.

Meanwhile, the blind-side flanker tends to be larger and is used in a more physical role on the pitch. These players need to be strong like a number 8, but also fast enough to be given the ball and make a play in open space. 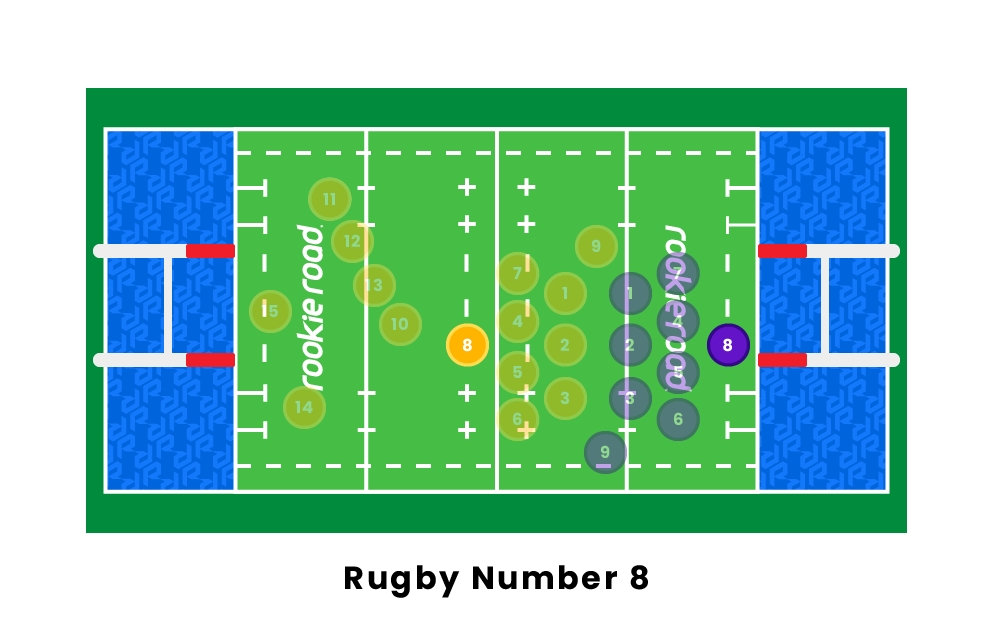 The Number 8 is similar to the two flankers; and number 8, along with the other two flankers, make up the trio that's called the back row. Number 8 has to be good in support play, and tackling and ball carrying are Number 8’s most important skills.

Number 8 also binds on at the back of the scrum. This is important because Number 8 is responsible for getting his team over the gain line, as Number 8 is the only forward that is allowed to pick up the ball from the base of the scrum to do this. This action is especially important when the team is scrumming near the opposing team’s try line (goal line), to gain important yards and score tries. 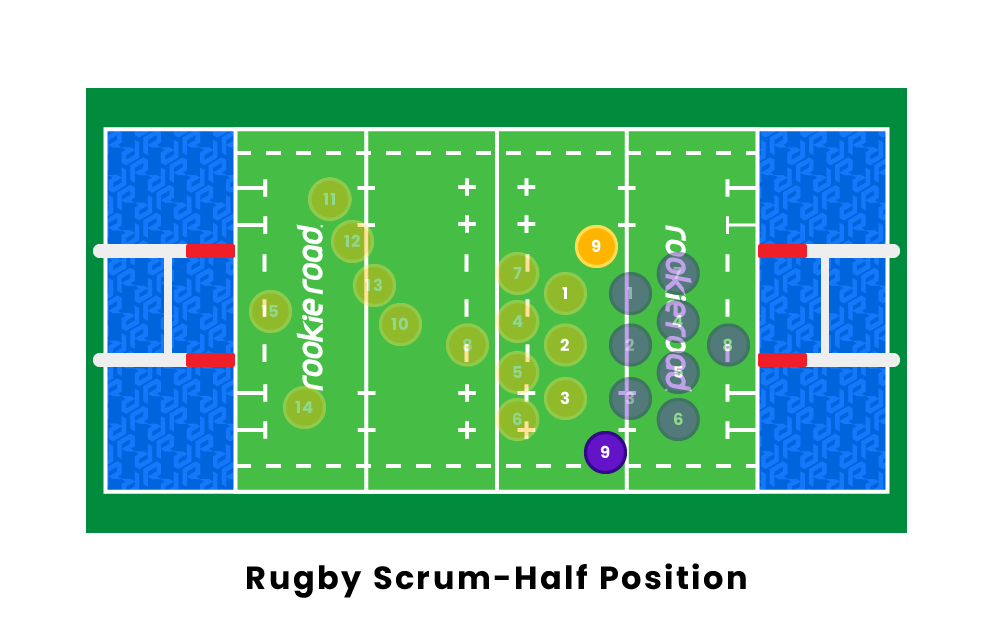 Since they are on the smaller side, scrum-halfs need to be protected by their larger forwards. The scrum-halfs most important job is making sure to make a good pass to the fly-half, who is the most important player on the pitch and controls both the offense and defense. 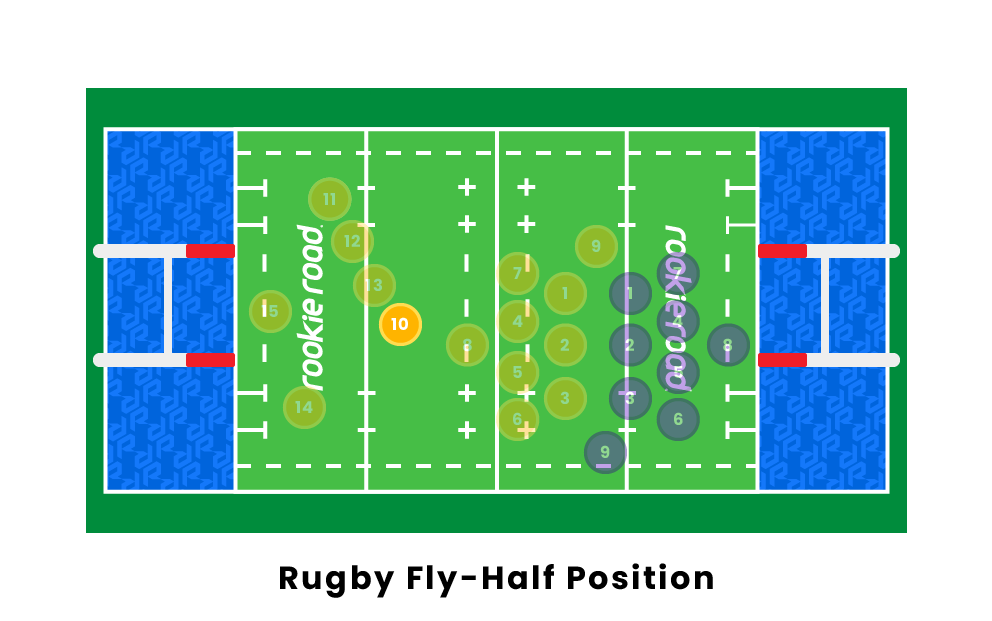 The fly-half is the most important position on the pitch because the fly-half runs the attack, organizes the defense, and decides when it is best to kick for position. The fly-half runs the attack by deciding when to pass the ball out to the centers on offense, and when to kick to relieve pressure. They do this by organizing the back line, putting specific plays into action, and changing the plays to react to gaps in the defense.

The fly-half runs the defense by organizing the players and making sure every opposing player is matched by a player on their team, making them the captain of the defense. Furthermore, the fly-half is also the team’s designated kicker for conversions, penalties, and drop goal attempts during the game.

Right and Left Side Wingers 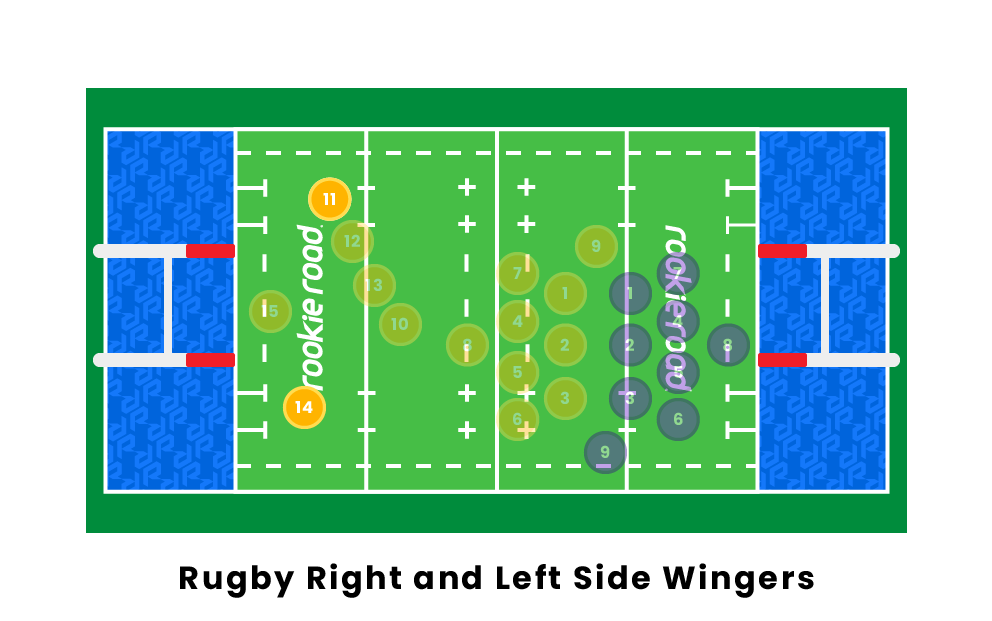 The wingers are the two players that play on the outermost part of the pitch. The wingers are the team's typical try scorers on offense and the team’s most important sideline defenders. The wingers need to frequently run up and down the pitch to score tries, and in order to prevent the other team from scoring,  wingers tend to be the fastest players on the pitch. Wingers tend to get the spotlight in games as they are typically the try scorers, even if it is the result of the whole team’s effort.

Wingers need to have good tackling skills, otherwise an opposing team’s winger may be able to blow past them on the sideline and score, as they are the last line of defense.

Inside and Outside Center 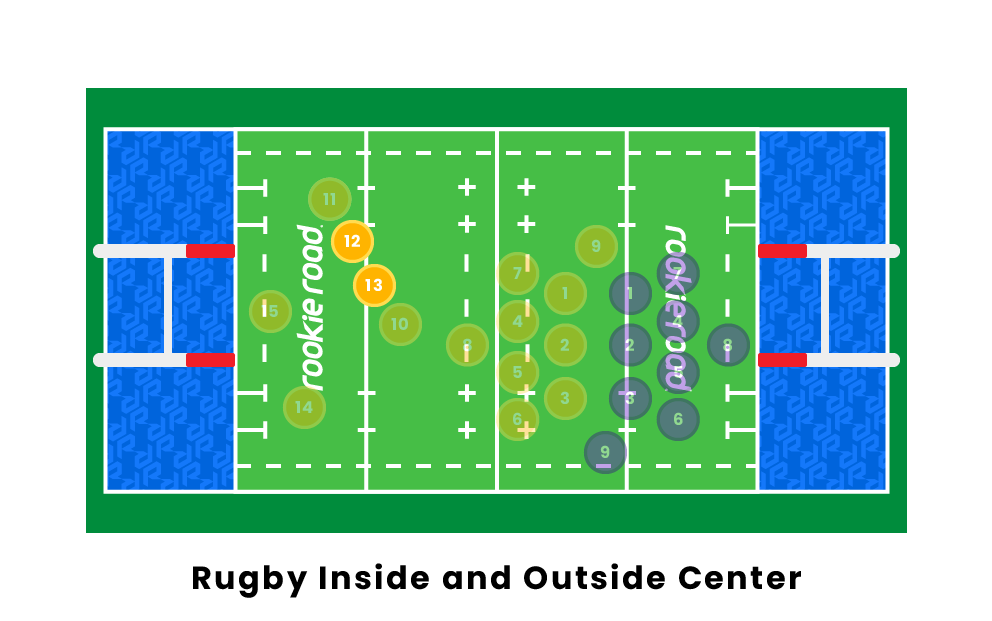 The main job of both centers is to either break the defensive line of the other team and score a try, or to draw in enough of the opposing team so they can create space and opportunities for their teammates to score a try. 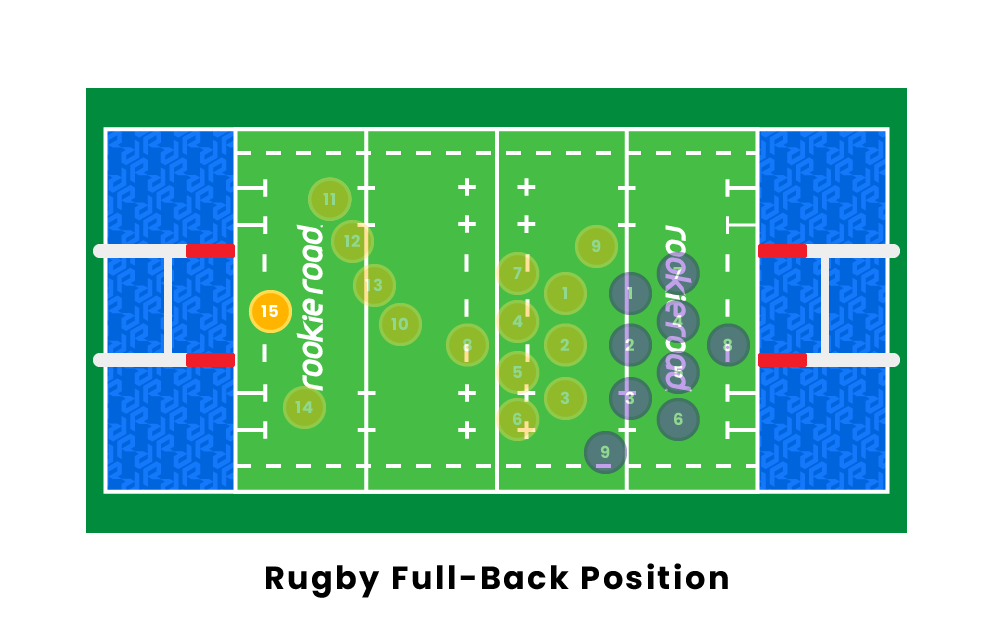 The full-back is the player at the back of the formation behind the entire back line. The full-back’s position on the field is often referred to as the “sweeper” of the defense, as there are no other players behind the full-back to tackle the opposing players.

The full-back is also responsible for receiving kicks from the opposing team. In order to succeed in this responsibility, full-backs must be sure-handed in catching the ball kicked to them. Then, they have to quickly launch attacks on their team’s offensive possession after catching the ball.

Oftentimes the full-back will be a kicker as well, but nowadays the position has evolved into an all-around player that can kick, attack, and still be a solid tackler as the last line of defense on a team. Most importantly, if a player breaks through the defensive line set up by a team, it is up to the full-back to stop them in their tracks and prevent a long try.

What is the best position to play in rugby?

How many players are in a rugby game?

How many positions are there in rugby?

In rugby there are 15 different positions which are: loose-head prop, hooker, tight-head prop, second row(4), second row (5), blind-side flanker, open-side flanker, number 8, scrum-half, fly-half, left wing, inside center, outside center, right wing, and full-back. These 15 players are then split into two groups: the forwards and the backs. The forwards are eight players that include: hooker, props, second row (4&5), flankers, and number 8, and the backs are seven players that include: scrum-half, fly-half, inside center, outside center, wingers, and a full back.