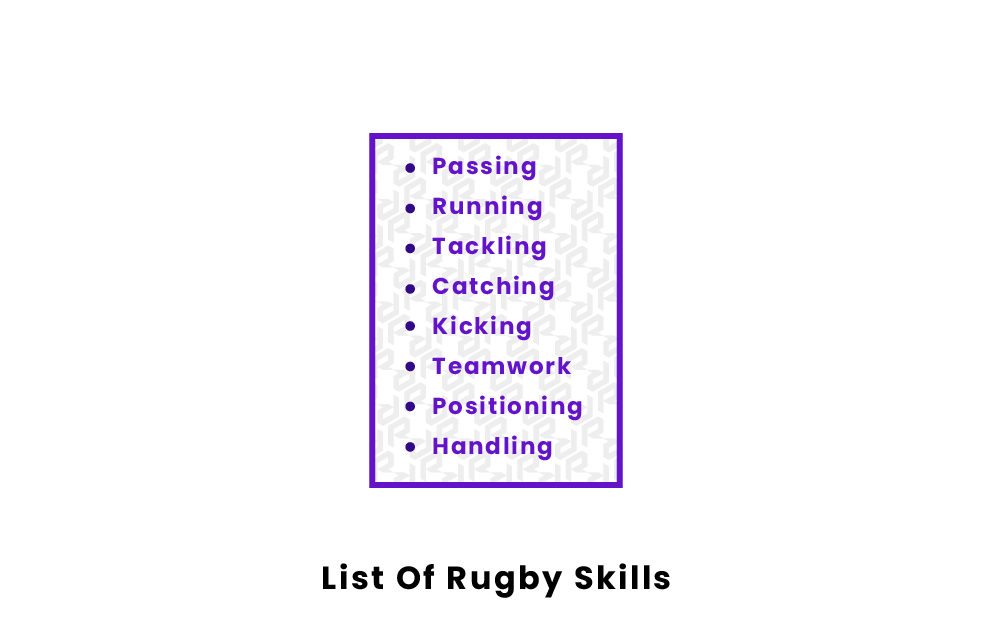 Rugby combines a couple of sports into one giant spectacle. One of the most physically challenging sports, there are plenty of rugby skills transferable to other sports. The list below will illustrate what it takes to become a good rugby player.

It is fairly hard to score in rugby without passing the ball to a teammate. In order to pass in rugby, it must be a backward pass. The usual technique for a pass is in the underhand form. Most passes create spin on the ball so that it is fairly easy for the recipient to catch it.

This skill is an integral part of any sport, but importantly rugby. The rugby field is similar in length to a football and soccer field, so there is a lot of ground to cover. Being able to run fast is important whether you are on offense or defense. It will be hard for your opponent to score when near you if you are able to catch them quickly.

Being able to properly stop your opponent from scoring is essential in any sport. In rugby, this is most effectively done by tackling. In order to tackle someone, you have to wrap your arms around their waist and pull them down to the ground. Be careful when tackling since there is no protective padding used in rugby, and you do not want to get hurt.

Another transferable skill used in rugby is the ability to catch. Catching the ball is important on both offense and defense. It will help you move the ball up the field and have a better chance of scoring. To master this skill, play catch with a teammate or improve your skills by training with one-handed catches.

Kicking in rugby is slightly different from other sports. Since the ball is shaped differently, you have to get a feel for the ball before knowing how to kick it. Kicking is also used in many different situations in rugby. You kick on kick offs, conversions, field goals, or in the middle of possession to try and score a try.

This might be the most important skill in the game of rugby. To effectively beat your opponent, you need to be on the same page as your teammates. This means knowing where everyone is positioned, what they do, and communicating well. Developing strong relationships with the team will help you be ahead of the game when you need it most.

There are many positions on the rugby field, so knowing your position is vital to playing well. To be good at positioning, it is important to study the game plan as well as know your teammates’ positions. Knowing your position entails knowing what to do when on offense and defense.

The ball in rugby is much bigger than a football, but it is relatively the same shape. It is normally held differently than a football when you are the ball carrier. Most rugby players hold the ball vertically in their arms rather than horizontally. This is because it gives the opponent a smaller area to work with when trying to knock the ball loose. It is harder to protect the ball horizontally because it is longer in nature than a football.

What are the basic skills in rugby?

The basic skills every rugby player should have are the ability to pass, run, tackle, and catch effectively. Passing is crucial in rugby, as it is how the ball is advanced down the field as a coordinated team effort. Running is also especially important in rugby, as running fast and strategically will help you to evade tackles and put you in a position to make tackles yourself. Tackling is an important basic skill, as it is the only way for you to stop an opponent from running down the field. Finally, catching is a crucial basic skill that will help you to maintain possession of the ball.

What are the four types of passing in rugby?

The four types of passing in rugby are the basic pass, the spin pass, the pop pass, and the scrumhalf pass. The basic pass is simply flicking one’s hands to pass the ball. The spin pass is similar, but a counterclockwise spin is added. The pop pass uses one’s forearms to pump the ball into the air to another teammate. The scrumhalf pass, also known as the halfback pass, is a long, spiral pass made from the base of a ruck.