How Does Scoring Work In Rugby? 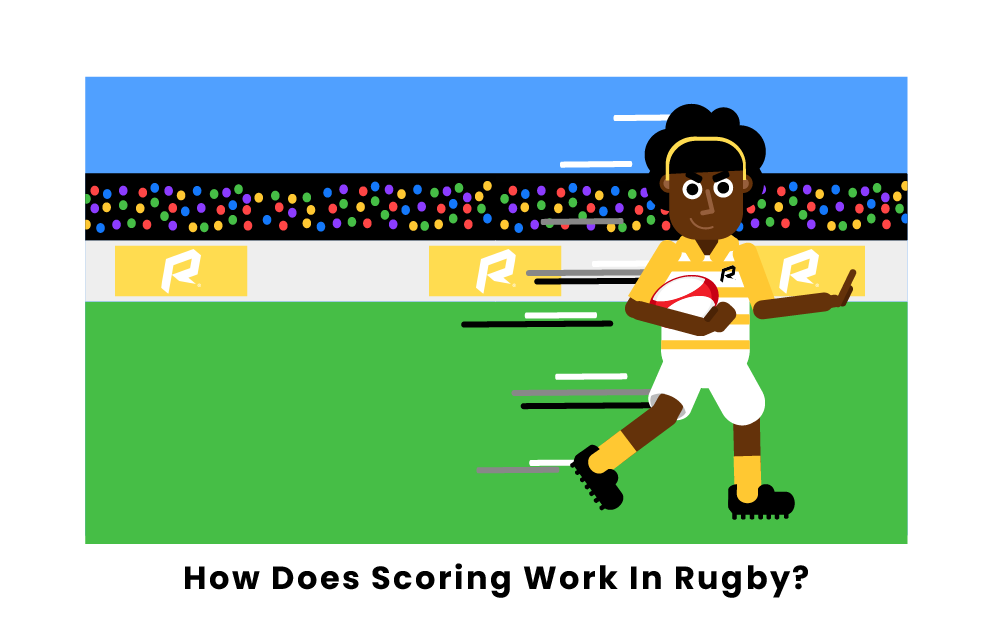 Scoring in rugby is done several ways. Players can receive points from a try, a conversion, a penalty kick, a drop goal, or a penalty try.

A try, worth five points, is counted when a player puts the ball either on the goal line or into the in-goal area. The player with the ball does not necessarily need to have complete possession, so the player just needs to firmly press or tap the ball to the ground control of the ball.

When the player is drifting out of touch, or out of bounds, they need to place the ball before hitting the touchline for the try to count. Also, pressing the ball onto the bottom of the goal post is a try but not anywhere else on the goal post. This play is the most lucrative way to score points in rugby.

A conversion attempt occurs after a try is scored and is worth two points if completed successfully. Wherever the ball is placed during the try, the player kicking must move at least 10 meters back from the goal line to place the kicking tee, but the player can move further back if desired.

The fly-half, number 10, or the full-back, number 15, are usually the best kickers on the team, so they kick for the conversion, but anyone can kick if the team has a different strategy. Once the kicker makes a forward motion, the opposing team can run from the goal line to try to block the conversion.

Rugby teams respond to penalties in a few different ways. They can utilize a tap penalty which involves a player tapping the ball off his foot and continues the game. The team can also kick to touch. This play requires a player to kick the ball into touch, and wherever the ball flies out, the kicking team has a throw-in from outside the touchline.

To score off of a normal penalty, the team must attempt a kick at goal from where the penalty occurs. For this penalty, the referee raises their hand signalling the penalty, and the player tells the referee they want to go for points and a member of the sideline will quickly run out a tee for the player kicking. If the offensive team makes the kick for goal, it is worth 3 points and the game restarts from a kickoff. If the team misses, the game continues from where the kick goes out of touch.

At any point in the game, an athlete can drop the ball off of the ground and kick it. If it goes through the goalposts, the team scores three points and a kickoff occurs. This play has become more common in professional leagues than between amateurs.

How many points are usually scored in a rugby game?

The score of rugby games depends on the playstyle of the teams and the conditions the game is played in, whether it be the field or weather. Typically, teams score under 40 points per game. When a team wins by a big margin, the winning team may score around 60 points or sometimes, even more, if the game is that unbalanced.

How have the points earned from a try changed?

There have been several changes to the scoring system of rugby. The amount of points from a try has progressed from one to five throughout the history of the sport. At the inception of competitive rugby in 1890, a try was worth one point. By 1893, a try was worth three points until it changed to four points in 1971. The most recent change occurred in 1992 when a try became worth five points.

What are the most points a single team has scored in a Rugby World Cup match?

New Zealand, or the All Blacks, scored the most points by one team in the Rugby World Cup played in South Africa. In 1995, the All Blacks defeated Japan by a score of 145-17. This game was completely lopsided as New Zealand scored 21 tries while Japan only scored two tries.

What countries are the best at rugby?

Pages Related to How Does Scoring Work In Rugby?