Rugby, also referred to as Rugby Union, is a contact team sport originating in England in the early 19th century. The game is played between two teams of 15 players with an oval-shaped ball on a rectangular field. Each side of the field also has an H-shaped goal post.

Rugby is one of the most popular sports in the world with over six million registered players as of 2014. The governing body of Rugby Union, World Rugby, was established in 1886 and organizes the Rugby World Cup every four years. World Rugby comprises over 120 national unions and the span of the organization is divided into six regions: Africa, Americas North, Asia, Europe, South America, and Oceana.

Rugby has become a popular sport in the United States as of 2016. Major League Rugby started its first season in the spring of 2018 where seven teams across seven different states compete in the league. Rugby sevens has also been introduced as an alternative to the traditional 15 person style. Over 900 colleges now compete in rugby. According to Global Sport Matters, people participating in rugby rose by over one million over a ten-year span. 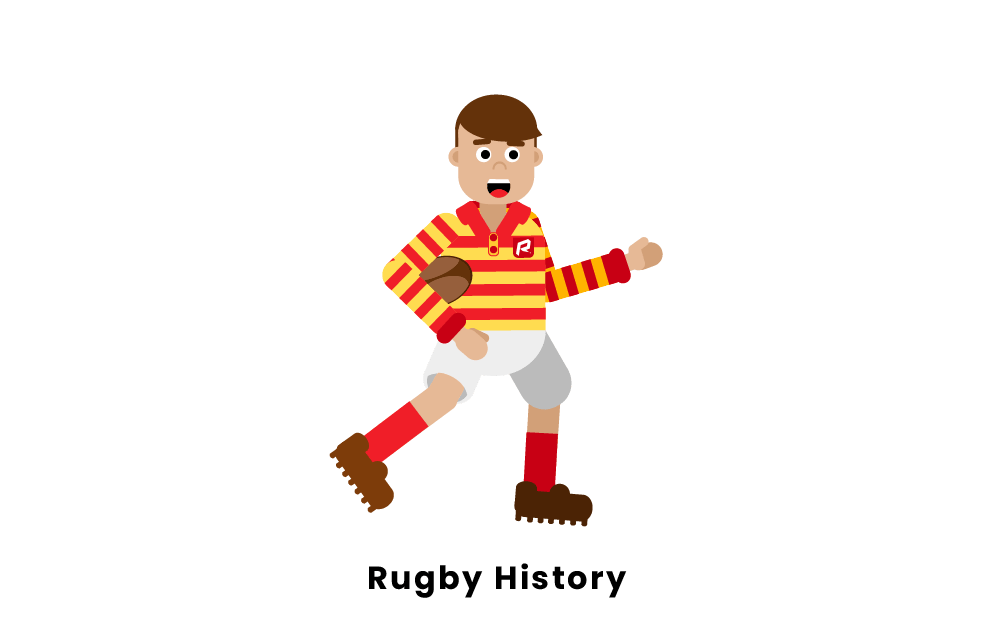 Rugby's history started with 16-year-old student William Webb Ellis, who completely disregarded the rules of soccer when he picked up the ball with his hands and ran into a goal.

By 1839, the first team at Cambridge was made and so were the "Cambridge Rules." The Rugby Football Union was then made in 1871 in a London pub.

The first international championship was formed by England, Wales, Scotland and Ireland in 1882. The sport continued to grow but it was not until 1987 when Australia and New Zealand hosted the first World Cup, and the sport has skyrocketed since. 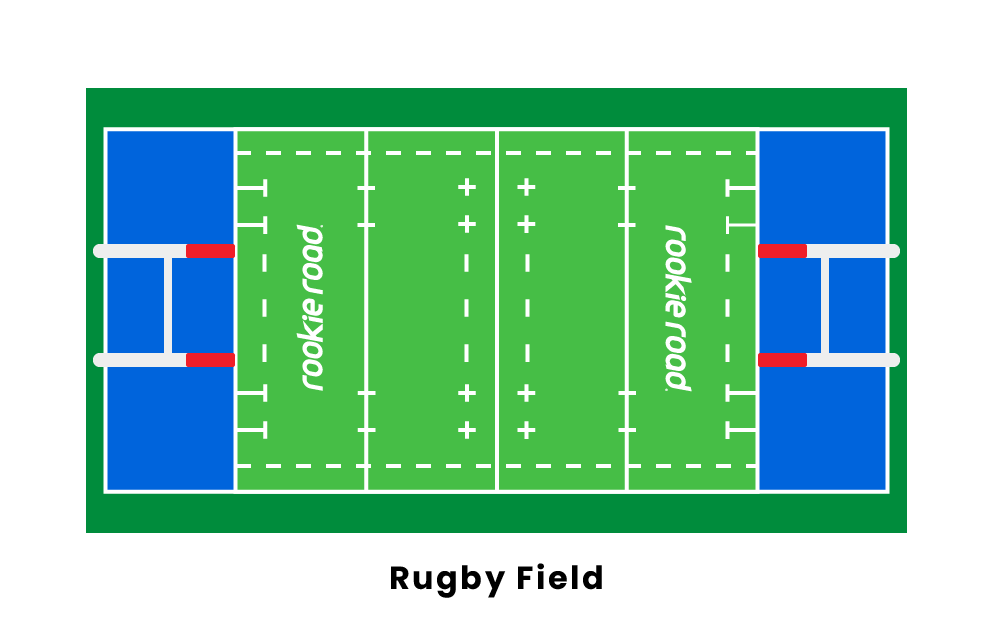 Rugby can be played on any type of surface but is mostly played on grass or turf fields in parks, schools, and other large areas of grass. Youth, high school, club and pro all have the same rules and scoring; the only main difference between the four different levels is the size of the playing field. The rugby field should be at a maximum of 70 meters in width and 122 meters in length. There are no differences between men's and women's rugby besides the size of the game ball. 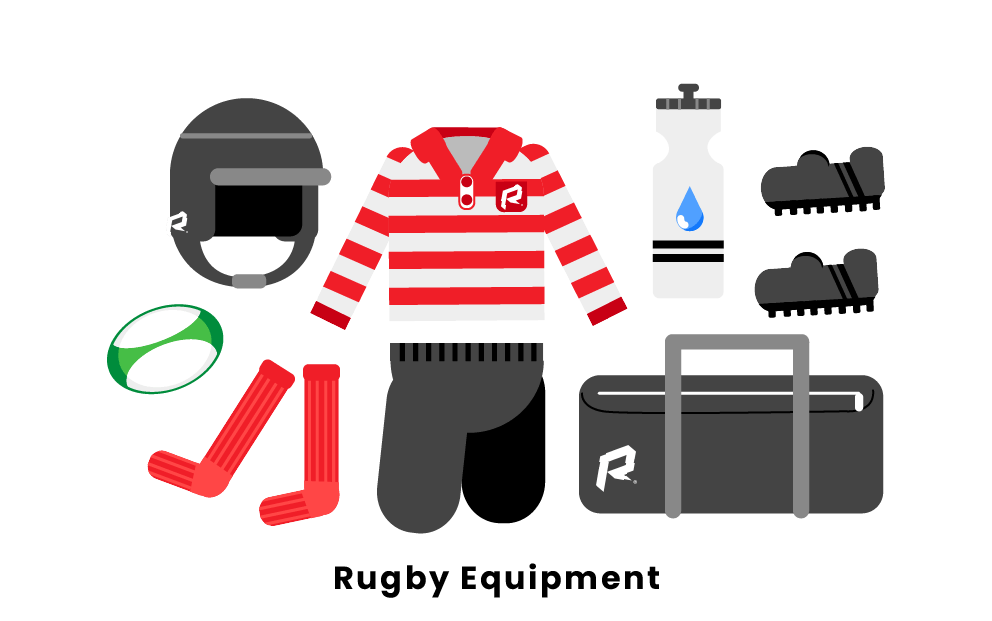 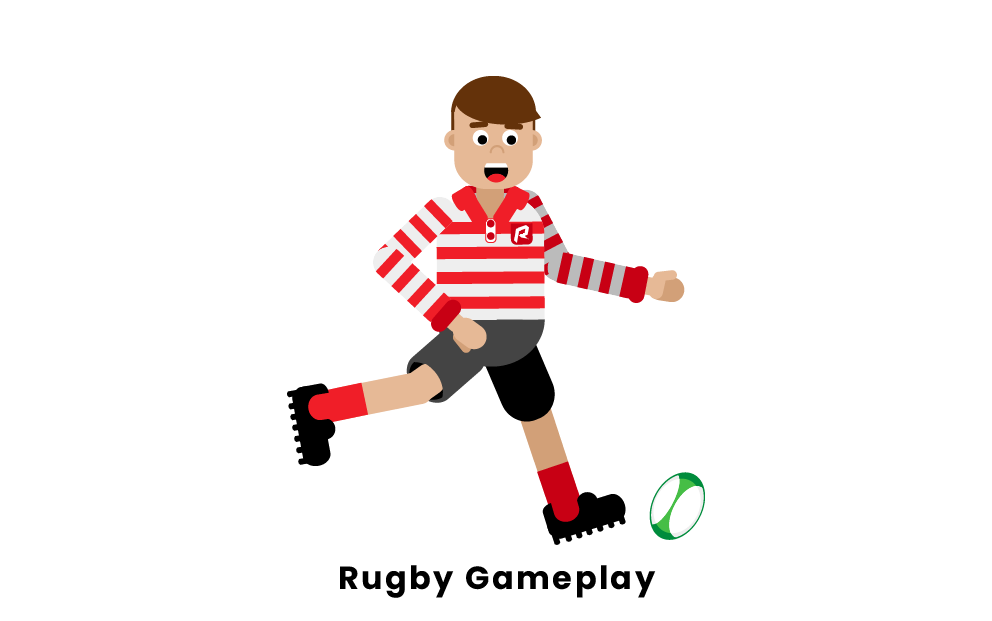 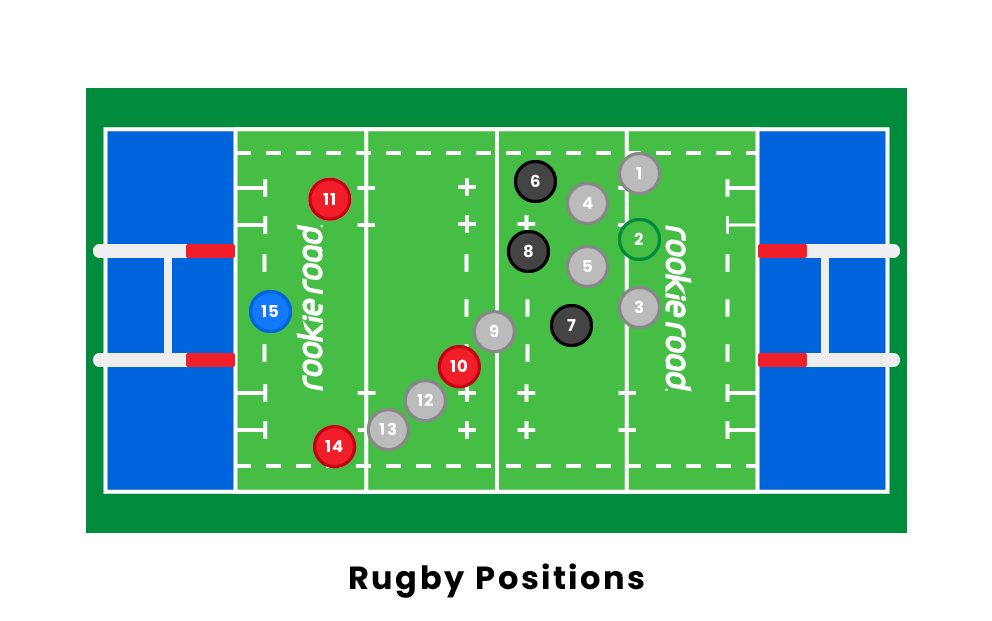 There are 15 players on a standard rugby team and a player's uniform number corresponds to their position on the team. Players wearing a number higher than 15 are substitutes. Players numbered one through eight are forwards. Forwards are the larger, stronger players on the team whose job is to gain possession of the ball. Forwards can be compared to linebackers in American football. Players numbered nine through fifteen are backs. Backs are the faster, more agile players whose job is to take advantage of the possession of the ball by moving the ball quickly. Backs can be compared to running backs and wide receivers in American football.

Just like in most major sports, there are infractions that can occur in rugby. Like American football, infractions in Rugby are called penalties. Penalties can result in goal kicks and restarts in play. 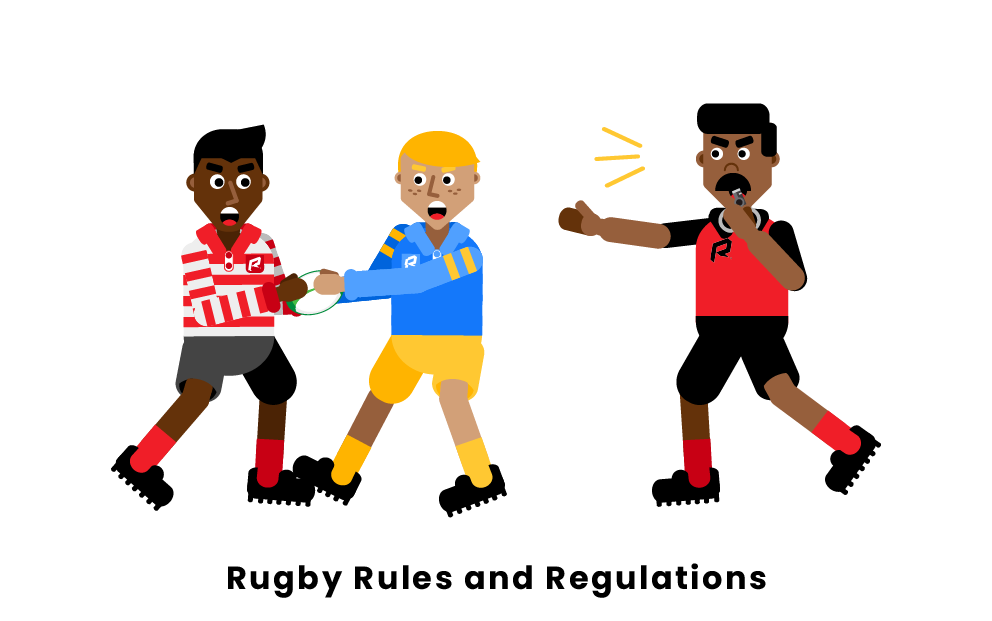 Rugby has an 80-minute clock, divided into two 40 minute halves with a ten-minute halftime in between. After halftime, teams switch sides of the field. Like in football, the field is rectangular with end zone goal areas on either side of the field with H-shaped goal posts. 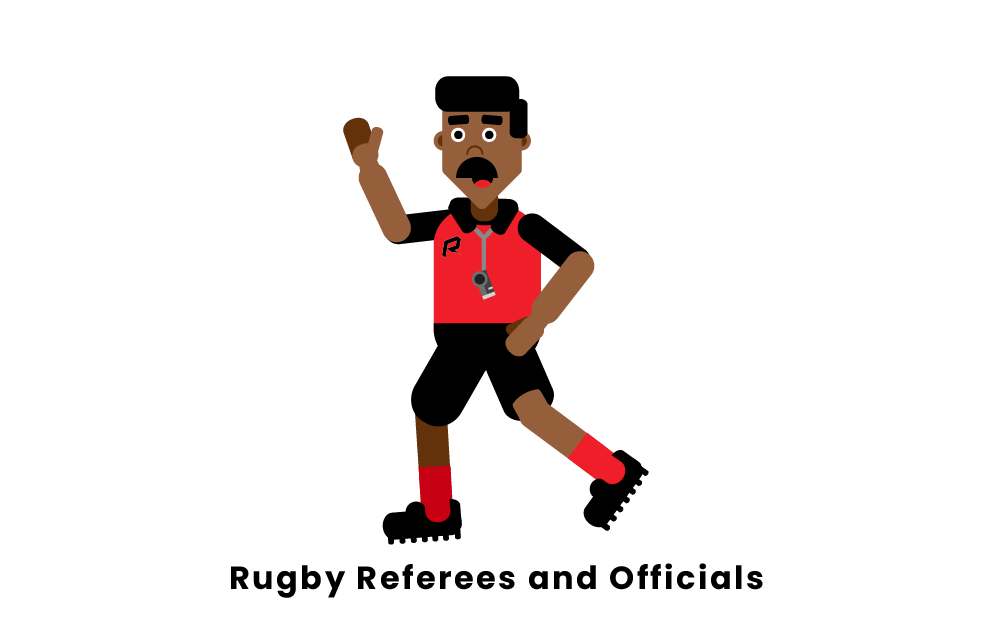 Just like any other sport, referees enforce the rules of the game. In order to become a referee in the United States, you must complete a Player Protection Package which consists of two free online courses. Then you will be able to register for in person workshops to get more skills and information, so you will be able to officiate rugby games. USA Rugby has a three level officiating program on their website, and they also have a two level course on sevens rugby. 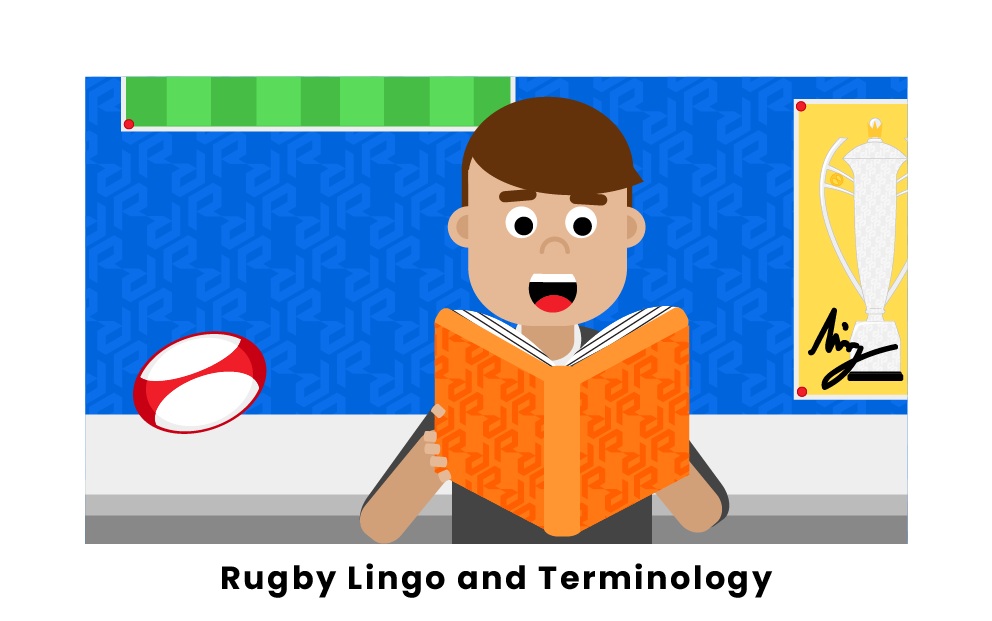 Here is a list of useful rugby lingo that will help you understand the game better: 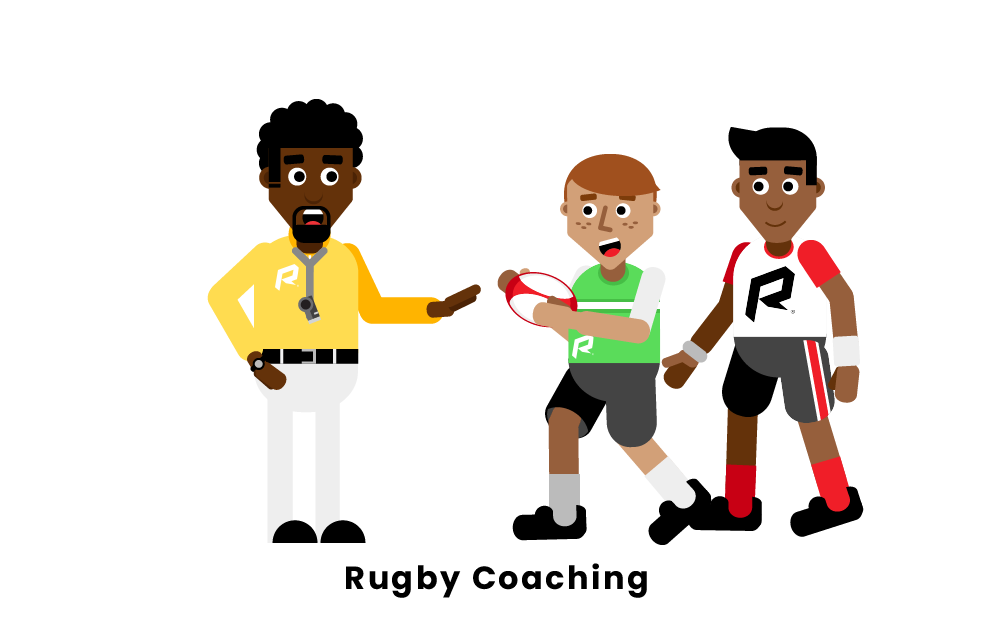 Coaching is also a great option for people who do not want to participate in a physically demanding sport like rugby. This allows you to be involved with the game without increasing your chance of injury. However, coaching can still be difficult, so World Rugby has an entire website dedicated to coaching education, online learning, technical content, a video library and a resource library. These resources are made for individuals who are just getting into coaching rugby, so the information is to the point and informative. 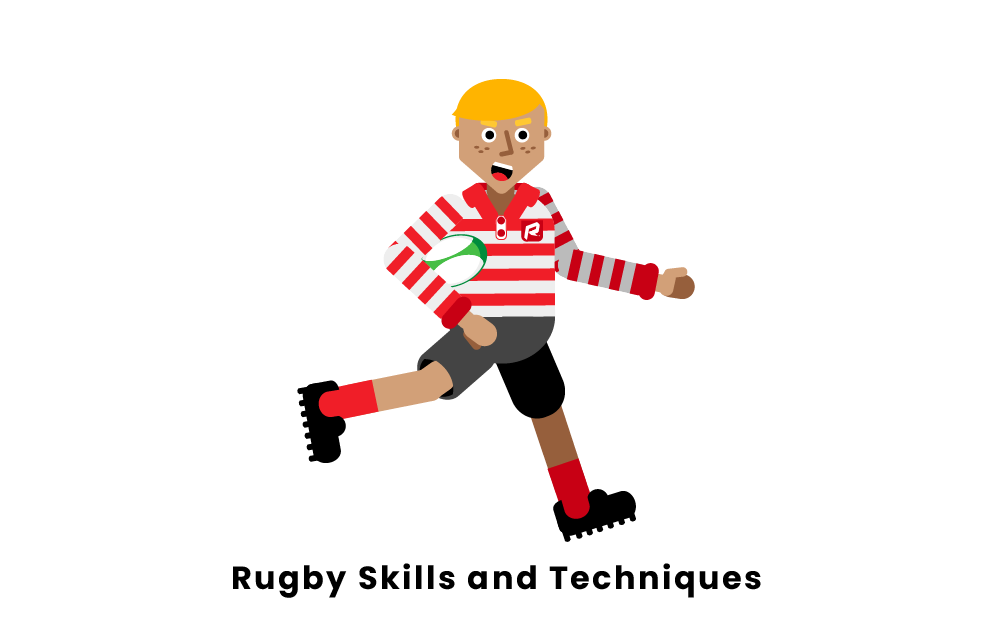 Rugby players need to be versatile with their skills and techniques. Some skills to have are running, passing, catching, tackling and kicking. Running is essential because it allows you to start and stop quickly and also go for long periods of time without getting tired. Passing and catching are needed to get the ball moving. Kicking is also crucial so your team is able to convert kicks and penalties for extra points. Having fun is also an important part of the game. 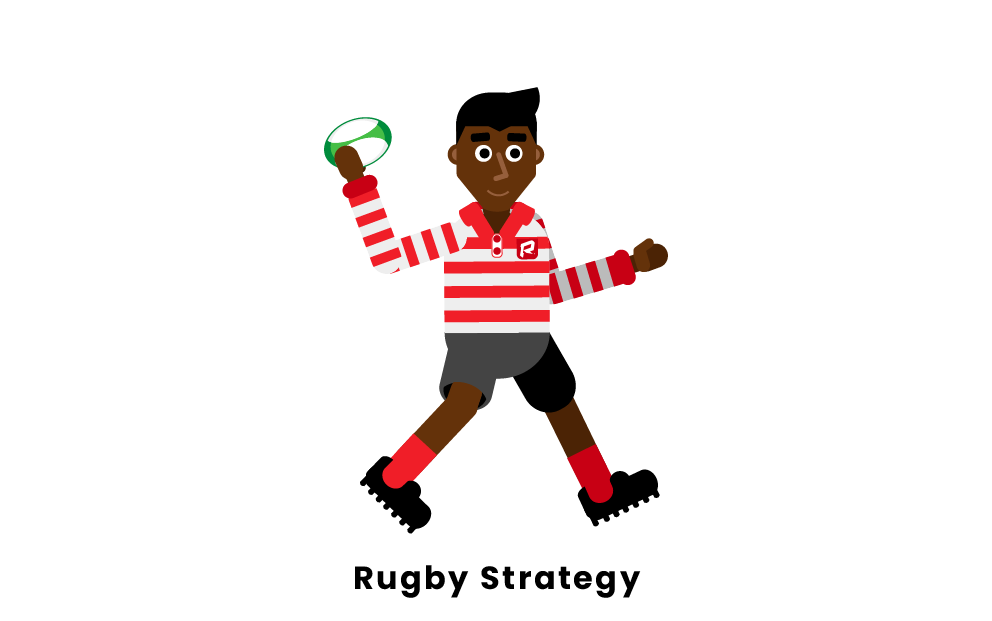 Here is a list of common strategies in rugby: 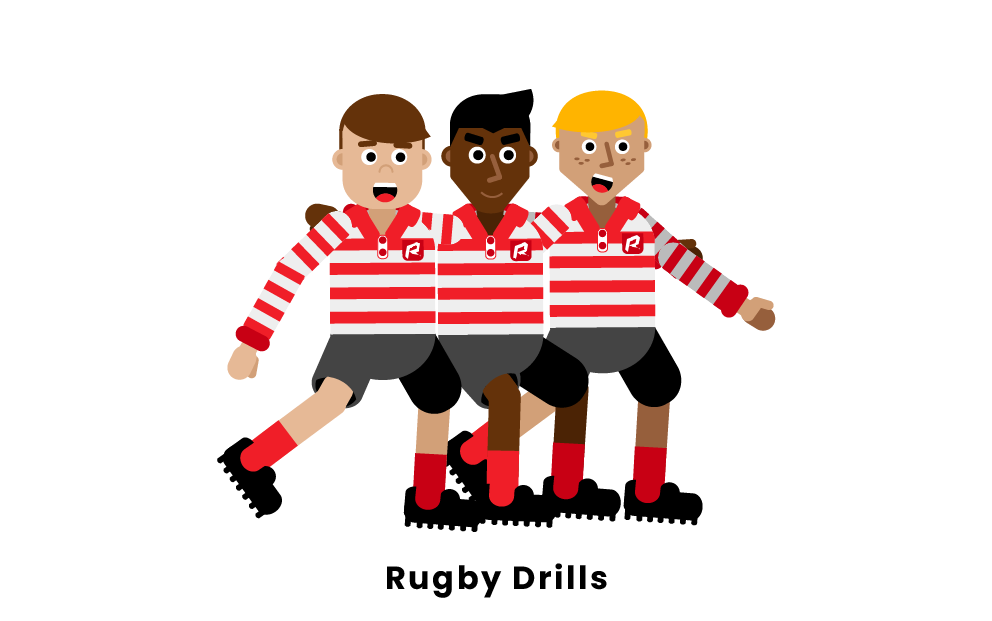 If you want to sharpen your skills as a rugby player, you will need to consistently practice some drills. Rugby drills are usually divided by skill. Here is a list of drills based on skill: 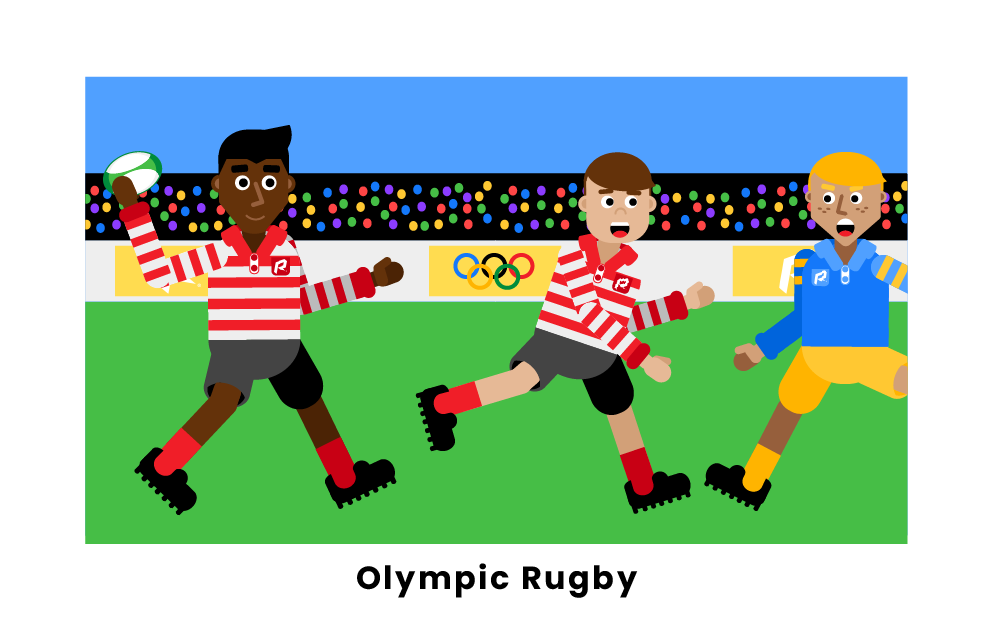 In Olympic Rugby, there are events for men and women that consist of seven players on each team. The pitch, or field, is 100 meters long and 70 meters wide. Traditionally this field size is meant for 15 players on each team, so fewer players on the field make a faster-paced game. The game is made up of two seven-minute halves with a two minute halftime. The short halves and fast paced game, require the athletes to be in great shape. 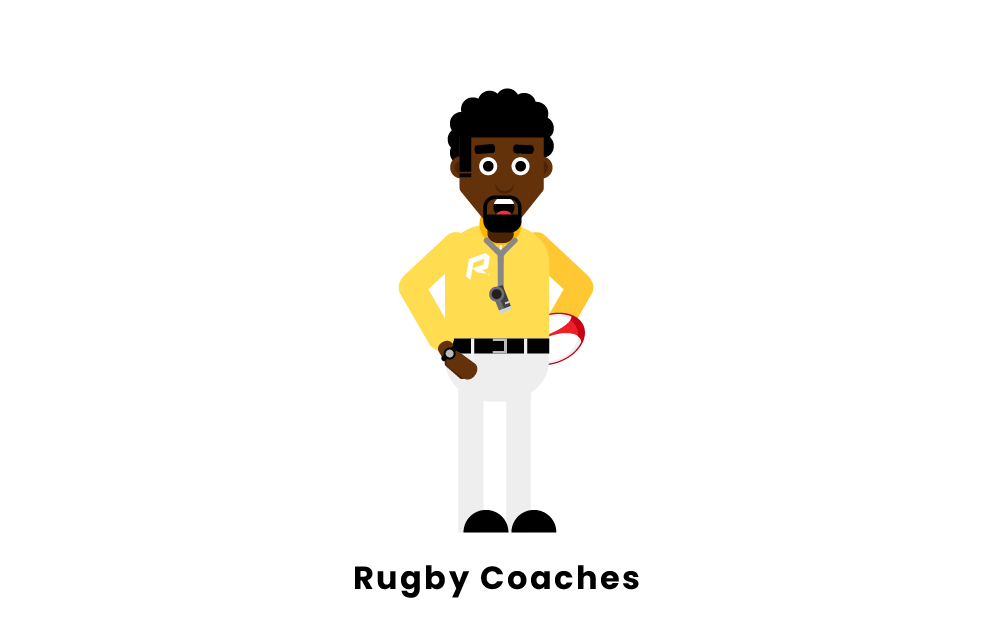 A rugby team is not complete without a solid coach. Coaching rugby requires in depth knowledge of the game so one can strategize and lead their team to victory. Rugby World Magazine recently had a bracket to determine who their audience thought was the greatest coach of all time. The verdict was that Warren Gatland was at the top of that mountain. He has coached the Wales national team and is currently coaching a New Zealand rugby union team called the Chiefs.

Here are some of his accolades: 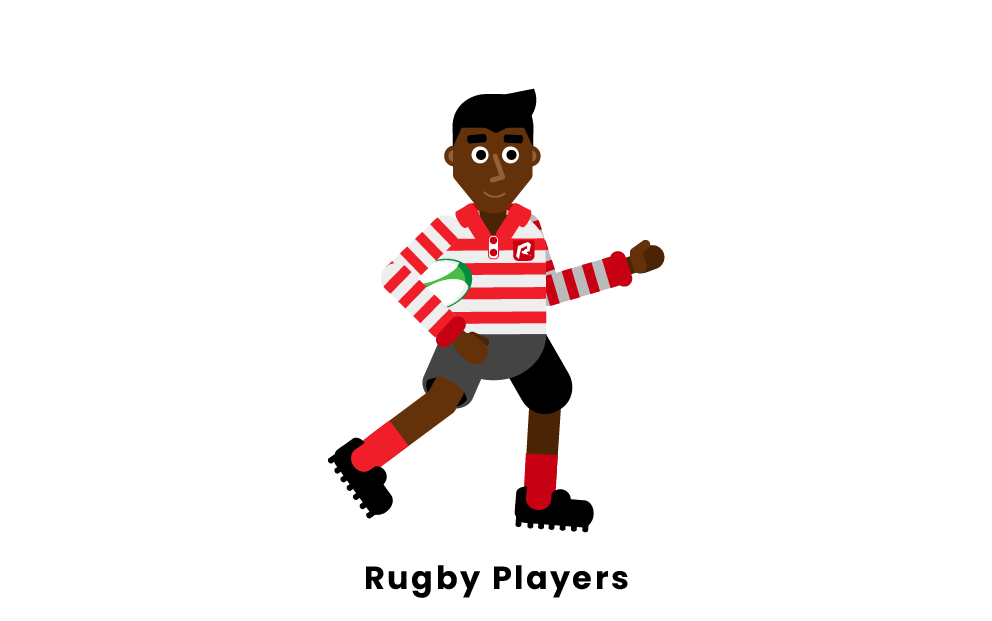 Rugby players are arguably one of the most athletic people in the world. The sport demands these players to be fast and agile while carrying a significant amount of weight. Some of the best players include: 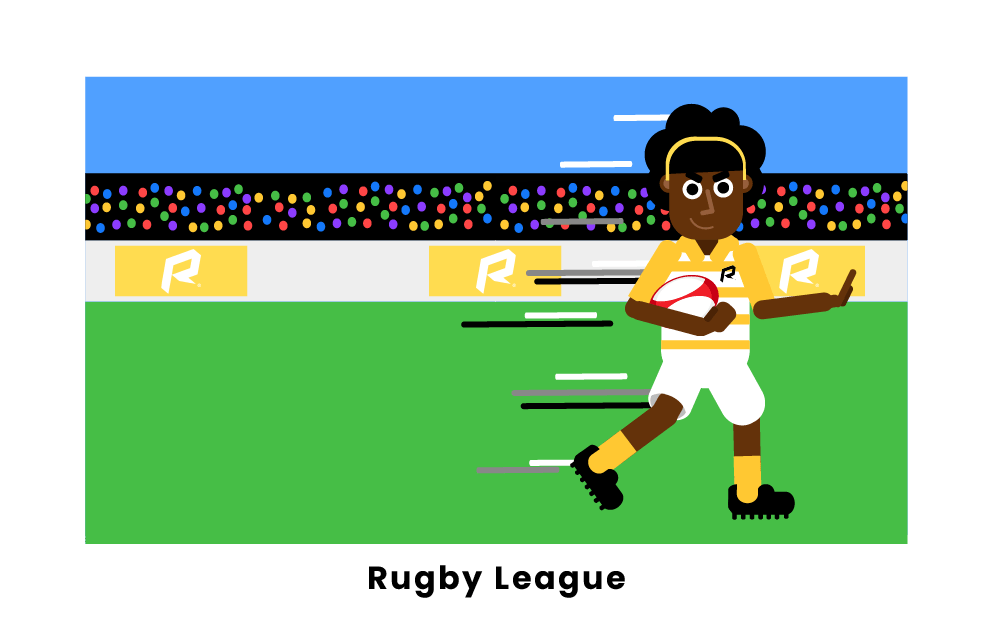 Rugby leagues have slight differences from rugby unions. The main difference is that leagues have 13 players on both teams, and unions have 15. Also, leagues allow 10 substitutions per game, while unions allow 7.

Scoring is the same in both unions and leagues, but the amount of points each score is worth is different. For example, a try in a union is worth five points and a conversion can add an extra two. In leagues, tries are worth four points and it can be supplemented for two more with a converting kick. Drop goals and penalties are both worth three points in unions, while they are worth one and two points in leagues. 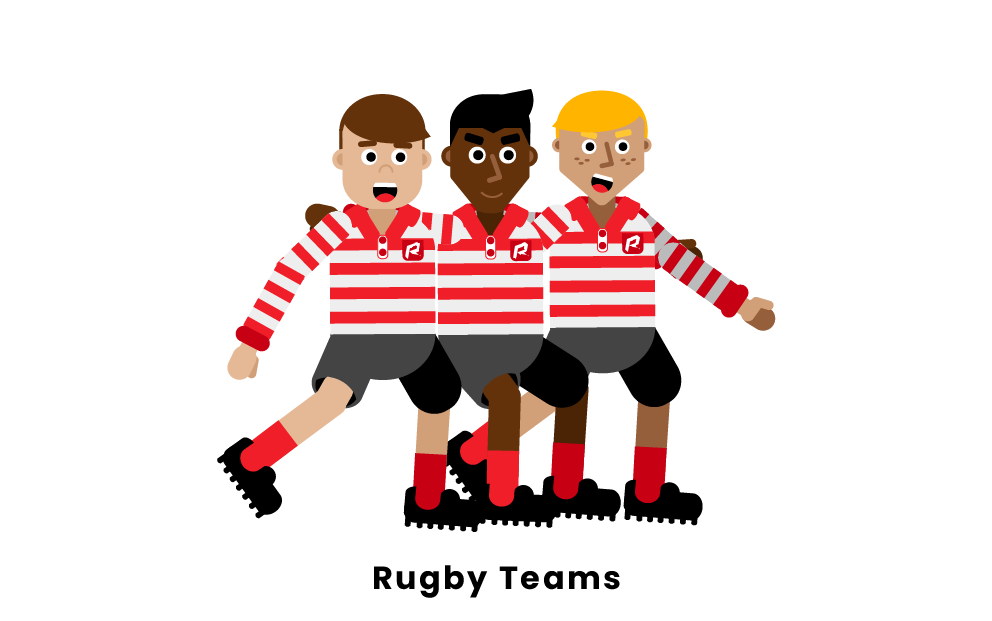 In order to play rugby, you need to find a club or team. There are many resources on the internet that allow you to search for clubs or teams in your area. USA Rugby allows you to search for clubs based on your state, club type and even club name. You can also adjust the miles from a specific location. It is a useful resource that lets you see what options are available near you. 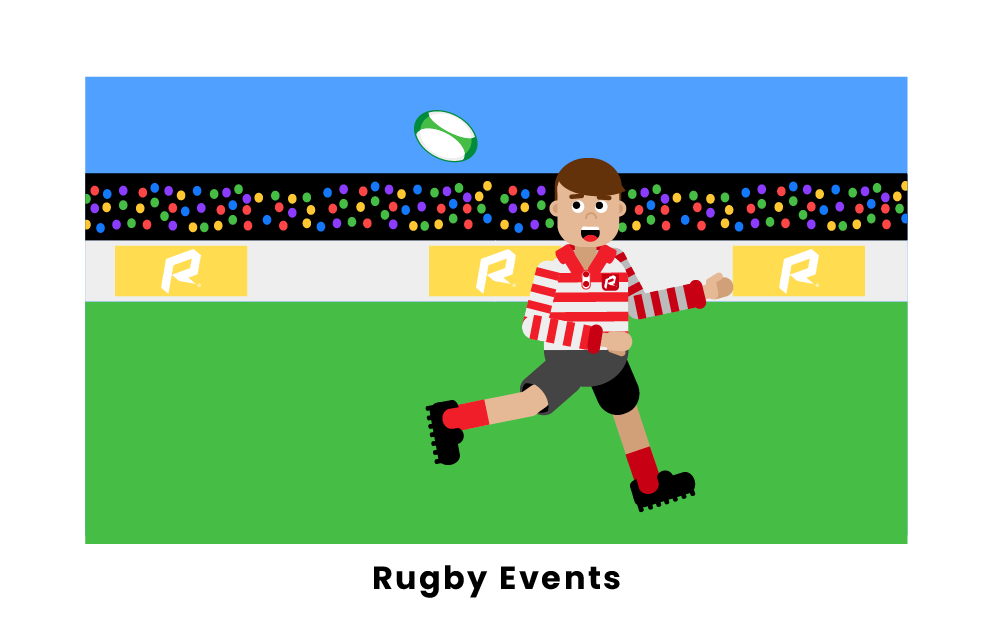 Rugby events vary based on location and the number of players. However, there are two main types of rugby events and tournaments: rugby fifteens and rugby sevens. Different variations of these include touch rugby, beach rugby, rugby tens and rugby twelves.

Some other events that rugby organizations hold are coaching and officiating clinics. These help new coaches and referees learn the basics of the sport.

Tournaments that take place every year and they can vary between sevens and fifteens. 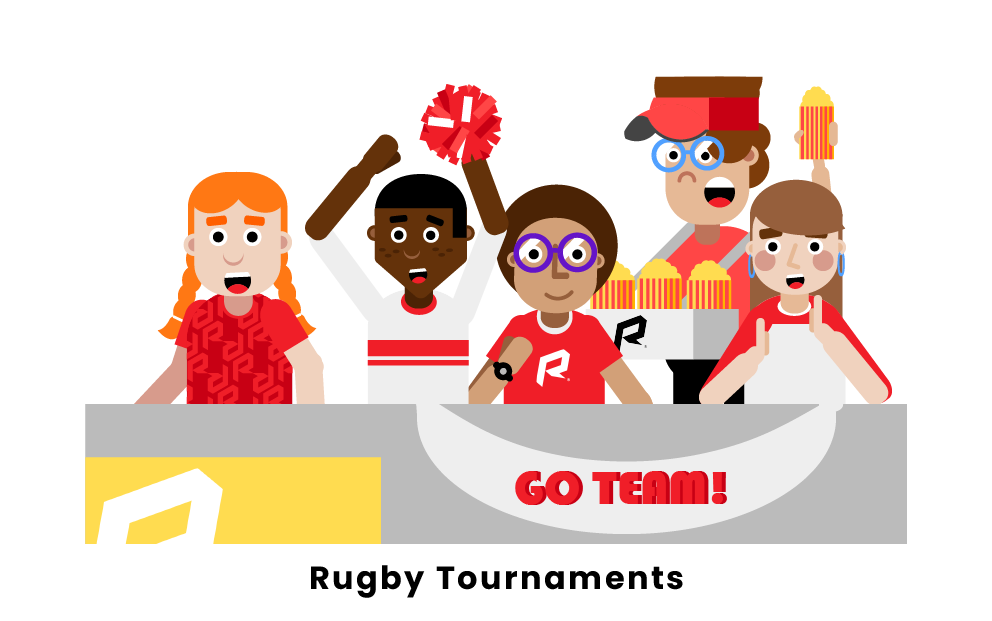 Rugby unions hold tournaments where multiple teams compete until two teams battle it out in the final game where a winner is crowned. Tournaments can be found on the World Rugby and USA Rugby websites. Some notable ones include the Rugby World Cup Qualifying, Rugby World Cup, HSBC World Rugby Sevens, Americas Rugby CHampionship, 2020 Rugby Championship, Six Nations and finally the Olympics. 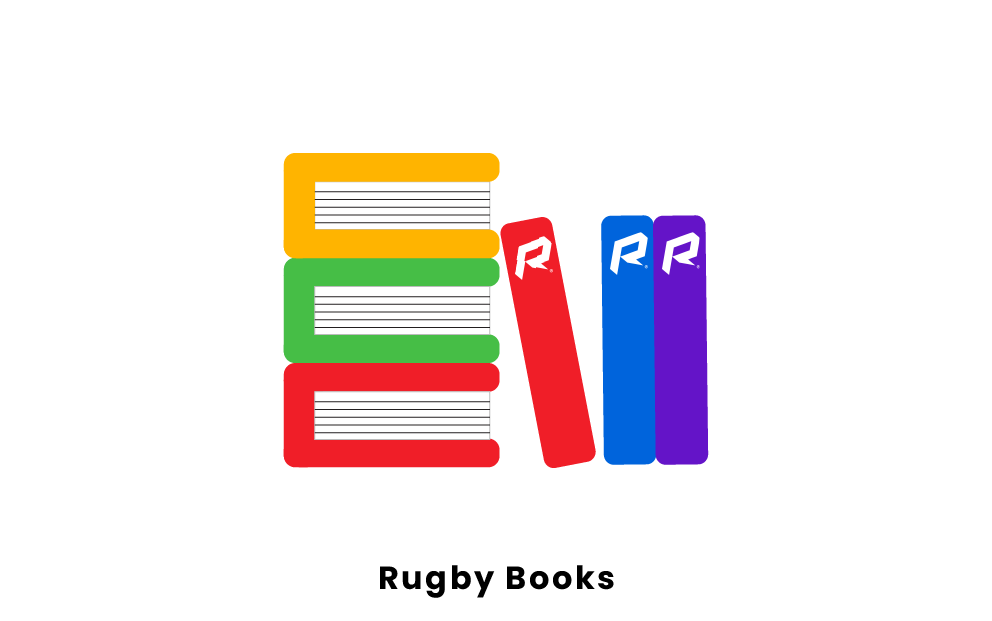 If you're a rugby fanatic, or simply want to learn more about the game, then books are a good option too. Below is a list of best-selling rugby books:

By far, the most famous rugby book is called Playing the Enemy: Nelson Mandela and the Game That Made a Nation, by John Carlin. It is about how Nelson Mandela got out of prison and won South Africa's first free election. However, the nation was still divided by the previous 50 years of apartheid. He had an ambitious plan to use the nation rugby team to bring the country together because they were hosting the 1995 World Cup, and they ended up winning. The book was later made into a movie called "Invictus," starring Matt Damon. 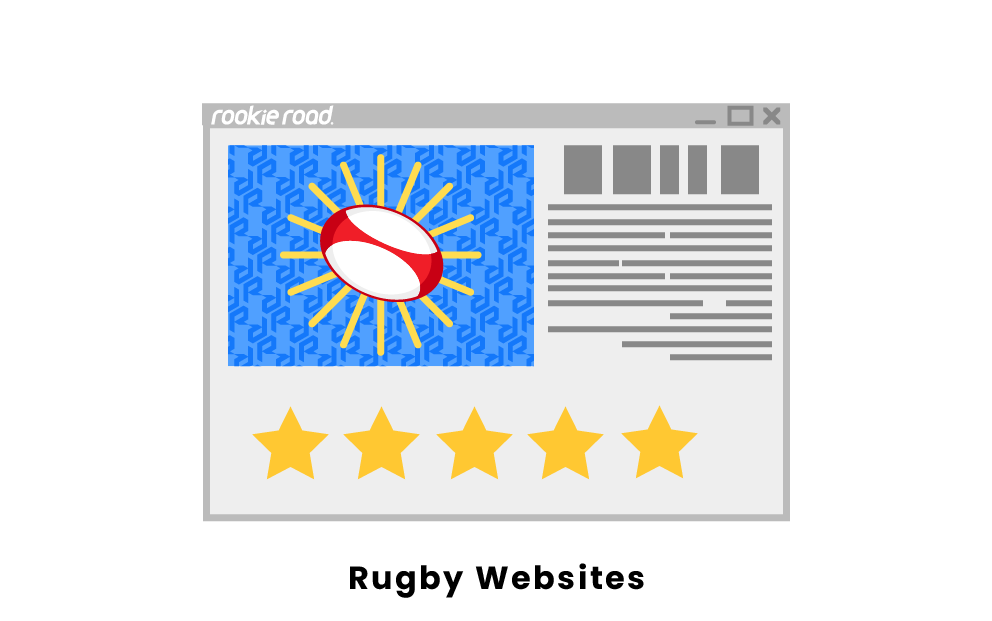 Here are some rugby websites that cover news, competitions, rules and all things rugby:

What is the difference between a rugby union and league?

What is the difference between a forward and a back?

A forward is a position required to move the ball as close to the opposing goal line as possible. A back plays behind the forward and are skilled in passing, kicking and catching.

Where is rugby popular in the world?

How often is the Rugby World Cup?

The Rugby World Cup started in 1987 and it has been happening every four years since.

What Does The Back Position In Rugby Do?Rugby Basic Rules For KidsTop 10 Richest Rugby Players
The Top 10 Rules Of RugbyWhat are the rules of rugby?Top 5 Ranked Mens Rugby Players Of All Time
PreviousNext