Rowing is a very old sport involving the simple concept of pushing a boat from one point to another as fast as you can using oars. Rowing comes from the time when big ships used oars, as well as the wind, to be the most efficient while travelling. In modern day rowers sit in a boat called a shell. There are two kinds of rowing. In team rowing, where the shell is filled with eight rowers, each team member only holds one oar and they must work as a team. Two person rowing or in single person rowing is actually called sculling and each team member has two oars, or skulls, one in each hand. 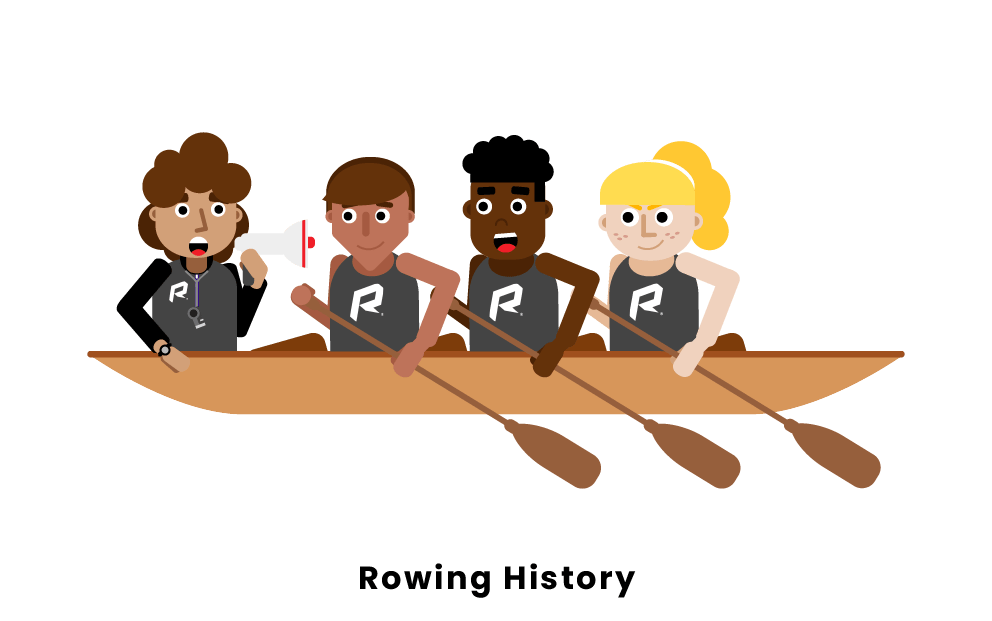 Rowing has been used for travel for thousands of years. The Egyptians, Greeks, Romans, and Vikings all at least partially used rowing to move their ships. Rowing as a race started in 16th century England where people would be transported from big ships to London on smaller row boats. The wealthier members would bet each other who could get to land quicker, leading to races between different rowboats. By the 1800s rowing was a full fledged sport with different events purely for the purpose of gambling and entertainment. In the 1820's Cambridge and Oxford Universities started to take rowing seriously as a sport. Thirty years later Harvard and Yale in the US picked up rowing. Rowing quickly became popular. Rowing was included in the Olympics in 1900 and has been an Olympic sport ever since. 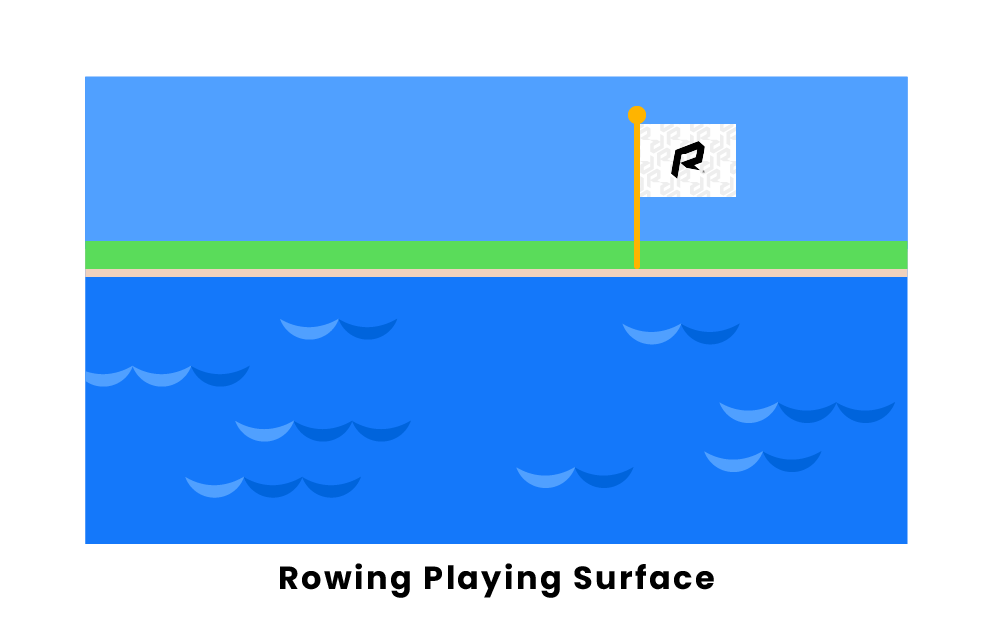 The playing surface in rowing is the water. Usually, races will take place in rivers, especially slow moving rivers. Sometimes rowing takes place in lakes. The most important requirement for rowing is that the water is fairly still. If the water moves too quickly it can pose a problem for the rowers. In more amateur rowing often a bridge or a pier will be the starting line and another landmark will be the finish line. For the Olympics and high level rowing, buoys are put out including lanes for each shell. The standard rowing race, including the Olympics, is 2000 meters. Younger rowers might only do 1000m. There are also long distance rowing events for some and these are up to 2 to 3 miles. 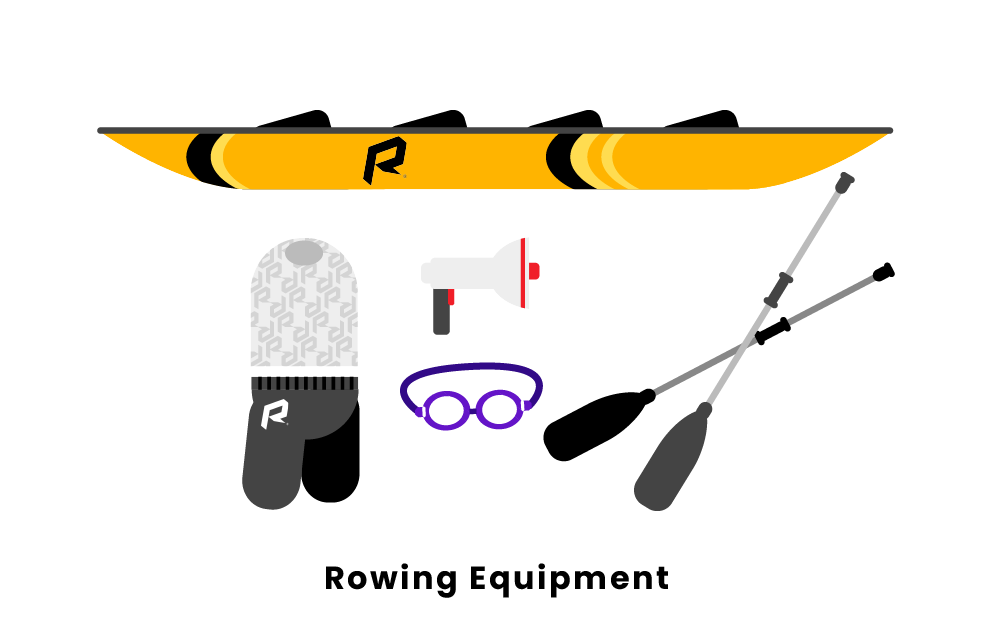 If you join a rowing team you may be lucky in that there isn't a lot of individual equipment you'll have to buy. However, the equipment you use in rowing is very important.

There is also training equipment available for both teams and individuals:

Rowing gameplay is pretty simple. Teams, or individuals, start rowing when an official starts the race and they go until the finish line. The boat that passes the finish line first wins. Most times all of the boats in the race lineup together. Sometimes, if there are too many boats, there will be different heats and the fastest time no matter what heat you are in is the winner. Regardless of if you're a team or just individual it is very important to have a combination of strength and stamina throughout the race. 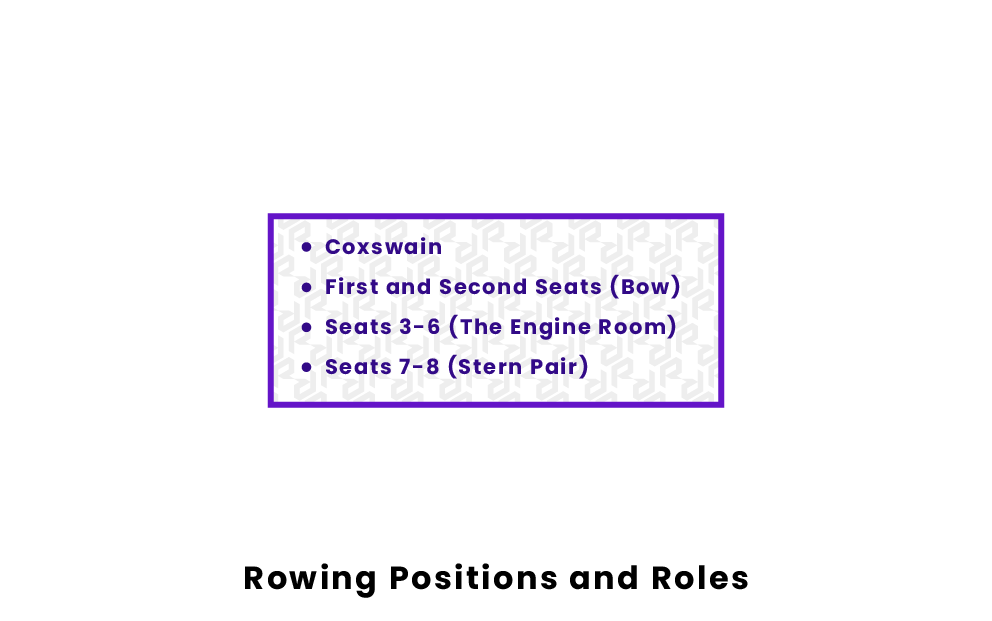 In single sculling or double sculling the positions are simple.You are either in a boat by yourself or with one person in front or behind you. You hold two oars, one in each hand and if you need to steer you steer by rowing harder on one side or another. In team events, especially eight person boats, positions become important.

Coxswain: Sits in the back of the boat and faces the rowers. Steers the boat and helps pace the rowers, telling them when to speed up or slow down. Usually someone is very small and light so they don't weigh down the boat very much.

First and second seats (bow): Helps to balance the boat. Sits the furthest away from the coxswain. Usually a lighter person.

Seats 3-6 (the engine room): The strongest rowers. Big and strong they follow the seventh and eighth seat's pace and pull the boat.

Seats 7-8 (stern pair): Sit closest to the coxswain. They're usually the best racers and they set the pace for the others by communicating with the coxswain.

Since rowing is a pretty simple sport the rules are also pretty simple. There are only two rules to consider when rowing.

Lane Changing: At the Olympics and higher level races each boat has a lane set out for them. Even though usually all the boats stay in their lane it is legal to switch lanes. In lower level rowing the same is true. You can turn left and right in rowing. The only exception is if you purposefully obstruct or crash into another boat. That is a disqualification. 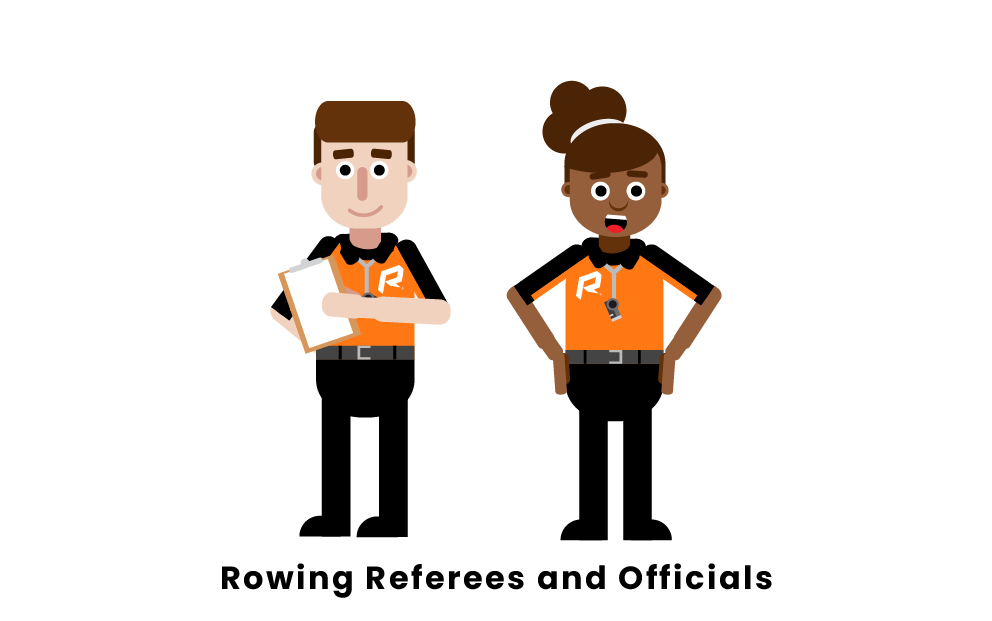 There are multiple kinds of referees and officials in rowing. Referees oversee everything in the race. Their assistants help them. Judges stand by the finish line and confirm the winner of the race. Starters align the boats at the start and start the boats. Umpires make sure the boats don't crash or interfere with each other. In races where there aren't as many officials available, they can do one or more of these things. 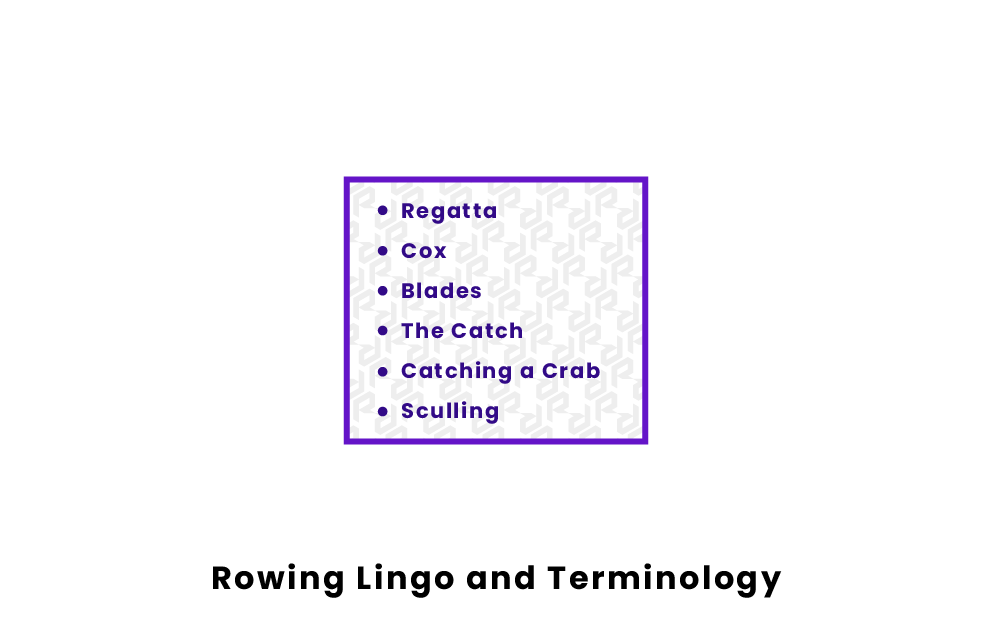 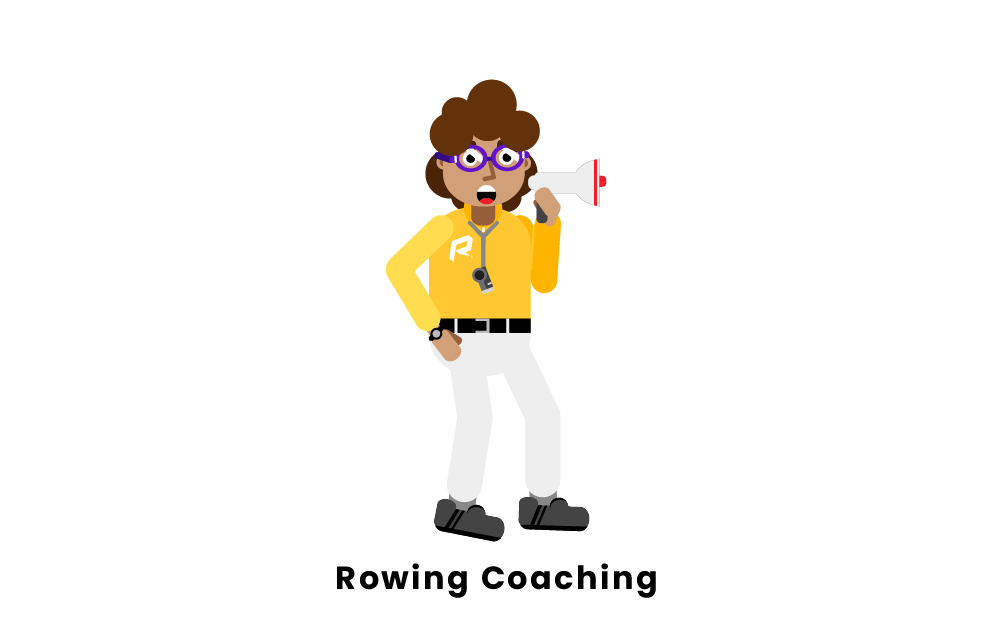 Coaching in rowing is very important. The coxswain is the coach of the boat when it's in the water. They work with the coach of the team. Usually that coach will run practices for the team. They mostly will be on a motor boat next to the rowing shell. Rowing coaches help set workouts for their team and help them to get stronger and row better as a team. 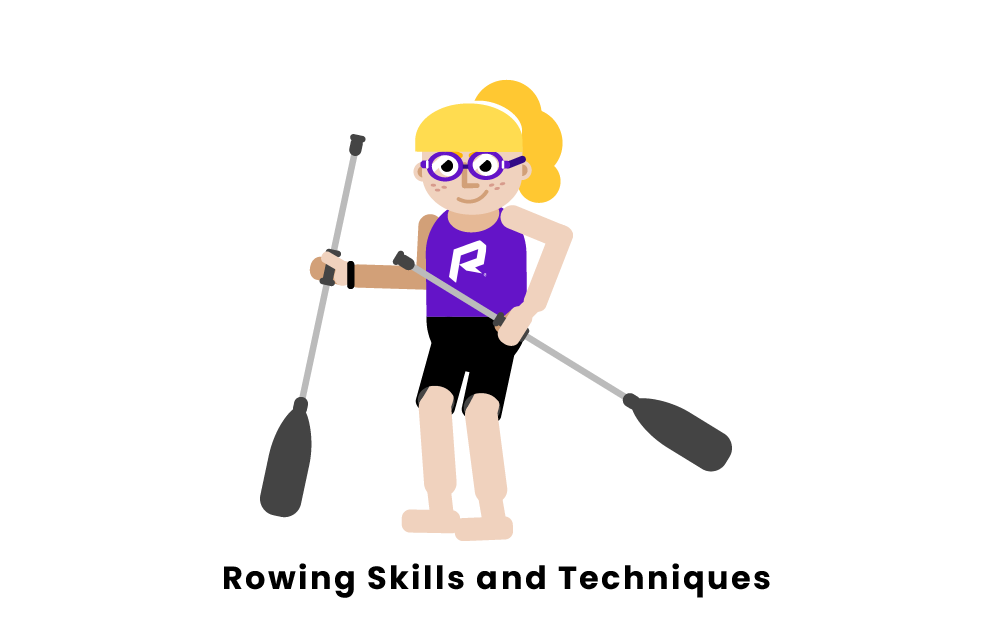 Rowing is all about a combination of strength, stamina and timing. In order to win races you have to be faster than other teams. However, teams may burn out if they start too fast. That is why stamina and timing are important. The most important part is the timing aspect. In team rowing being on time with every other rower is extremely important. When the whole team is on time then they will move way more smoothly and faster.

Race strategy is a huge part of being successful in rowing. Energy conservation and efficiency are key to being a successful rower. For the most part you want to start a race fairly slowly but at a strong enough pace. Toward the middle and finish of the race, you want to pick up the pace and pull more strongly. By the last 50 meters or so you want to all out-sprint. Still pulling in unison with your team, you want to go as fast as you can. The coxswain will usually indicate these changes, helping you and the team know the pace at which you will need to row, especially depending on what other teams are doing.

Rowing is a hard sport to practice. Not only do you have to be outside, you need enough space to be able to row for a few thousand meters. You can't row at all in bad weather. When you actually get on the water you can row different distances at different speeds to practice and get stronger. When you can't get on the water there are a few drills you can do using equipment out of the water. Rowing machines are a traditional tool for training. They simulate the feeling of rowing with different levels of intensity. To get more fancy you have rowing tanks. These are essentially small pools that electronically push the water against your boat to mimic actually being in the water. These are also used for practice, making you stronger and practicing what it's actually like in a race on moving water.

Rowing is a European sport that has been around for a long time. That is why the sport has been included in the Olympics since 1900. In the Olympics there are two kinds of events, sculling and sweep oar. Sweep oar are the team events, where each person only holds one oar, and there is a coxswain steering and organizing the boat. Sculling are the individual and two person events where each rower holds two oars. Olympic races are the pinnacle for rowers. The US is historically the best country in the world when it comes to rowing. Other teams that are good include Great Britain and Germany.

Rowing teams start locally. Some high schools, in the US especially, have teams. Many colleges and universities also have crews. From there you can qualify to be a part of your national team. That is where you can compete in international rowing events, namely the Olympics.

Rowing is a sport where individuals or teams try to pull a boat from a starting line to a finish line as fast as they can.

Where is rowing popular?

Rowing is a popular sport in the US, in England, and in other parts of Europe such as Romania and Germany.

Is rowing an olympic sport?

Rowing is in the Olympics. Rowing has been in every Olympics except for the first ones in 1896.

Pages Related to What is Rowing?