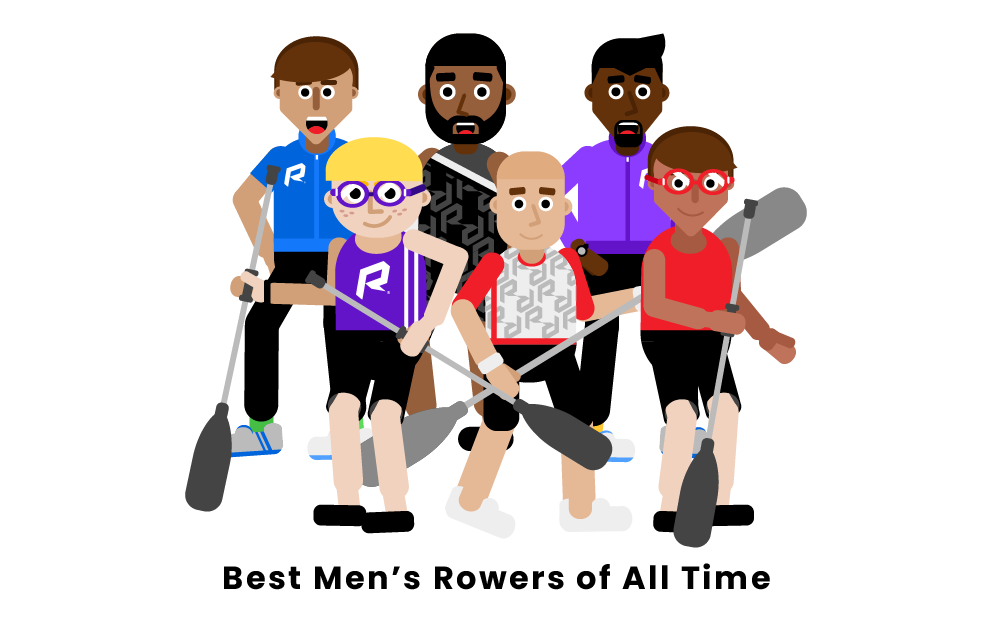 Rowing is a sport that is about strength, endurance, stability, and technique. It’s a sport that isn’t easy to begin but is even harder to master, as races that take place over thousands of meters of water are determined by mere seconds or less. There are different events in rowing based on the boat length, number of members, and whether or not someone is in the boat to cox. Below are six of the best men’s rowers across all disciplines and events.

Who are the best men’s rowers of all time?

Mahé Drysdale is a rower from New Zealand that has dominated singles sculls in a way that few others have ever been capable of. Drysdale competed in the coxless four event in the first of his four Olympics at the 2004 Athens Games, which were the only games that he failed to medal in. He would go on to win gold medals at the 2012 London Olympics and the 2016 Rio Olympics and a bronze medal at the 2008 Beijing Olympics, where he raced severely underweight due to an illness. His true dominance came in the World Rowing Championships, where he won five gold medals, three silver medals, and set two World Records.

Steve Redgrave spent most of his career racing in coxless pairs, which is also where he saw the majority of his success. Redgrave was a key member of Great Britain’s boat that won gold in coxed fours at the 1984 Los Angeles Olympics. He would partner with Andy Holmes, also a member of the 1984 gold medal team, to win the gold medal in coxless pairs at the 1988 Seoul Olympics. The most formidable duo that Redgrave was a part of featured Matthew Pinsent. The duo would go on to race together over 100 times, including gold medals in coxless pairs at the 1992 and 1996 Olympics and a gold medal in coxless fours at the 2000 Sydney Olympics. The three golds with Pinsent and the two with Holmes gave Redgrave five gold medals across five consecutive games, a feat only four other Olympians have ever accomplished.

Matthew Pinsent is a British rower that helped propel some of the most dominant boats in history to victory. He captained the Oxford Rowing Club and dominated in both coxless pairs and coxless fours during the 1990s. Pinsent is typically associated with Steve Redgrave, as the two raced together for years and experienced the success of winning three Olympic gold medals together. The two managed to win a gold medal in every variation of the Olympics or World Rowing Championships between 1991 and 2000, a period of unmatched dominance. Pinsent also specialized in the Henley Royal Regatta, as he only failed to win a gold medal once between 1990 and 2004.

Olaf Tufte is a Norwegian-born rower that competed in seven different Olympic Games spanning from 1996 to 2020. At the 2000 Sydney Olympics, Tufte competed with fellow countryman Frederik Bekken, and the duo won the silver medal in double sculls. He would then go on to win the gold medal in single sculls at the 2001 World Rowing Championships, making him the first Norwegian to be the single sculls world champion. Tufte also won gold at the 2004 Athens Olympics and the 2008 Beijing Olympics in single sculls, as well as a bronze medal at the 2016 Rio Olympics in double sculls.

James Cracknell is yet another British rower that experienced immense success in the 1990s and early 2000s. Cracknell would qualify for four Olympic Games over the course of his career; however, he’d only make it to three, as he missed the 1996 Atlanta Olympics with tonsillitis. He was a member of the Great Britain team that won coxless fours at the 2000 Sydney Olympics that included Steve Redgrave and Matthew Pinsent. The majority of Cracknell’s success would come along Pinsent, regardless of whether Redgrave was there or not, as the duo pulled off the rare feat of winning the gold medal in both coxed pairs and coxless pairs at the 2002 World Rowing Championships.

Paul Costello is known as one of the first great rowers, along with his teammate and cousin Jack Kelly Sr. Kelly garnered a majority of the attention between the duo, but that was due to Costello’s shy nature, not his performance in the boat. One of Costello’s most impressive achievements is the World Record he set in single sculling the 2000m back in 1924. Not only was he the first rower to win the gold medal in the same event three consecutive times, but he is also the only American rower ever to win three gold medals.

Who is the best men’s rower of all time?

Mahé Drysdale makes an excellent case as the best rower of all time with his dominance in the single sculls and individual World Records. A case can also be made for Steve Redgrave after he won five gold medals at five consecutive Olympic games, a feat of dominance that only four other humans in history have replicated.

What men’s rower has won the most Olympic gold medals of all time?

What men’s rower has won the most World Rowing Championships gold medals?

Matthew Pinsent has won the most World Rowing Championships gold medals of all time with 10. Steve Redgrave, Pinsent’s teammate, closely follows him with a total of nine gold medals, which makes sense considering the duo spent the majority of their dominant careers together. Pinsent also spent a period of his career dominating with James Cracknell as his partner. In 2002, Pinsent and Cracknell would pull off the rare feat of winning the gold medal in both coxless pairs and coxed pairs.

Pages Related to Top 6 Best Men's Rowers of All Time