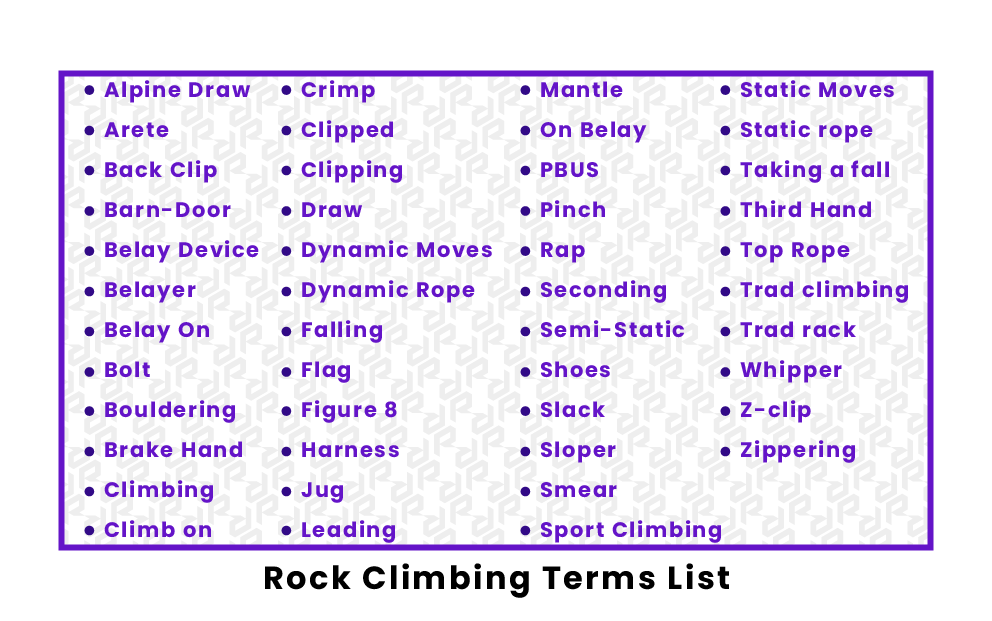 Rock climbing is a sport where the individual ascends mountains or artificial rock walls. Like any sport, there are many terms that individuals who are new to the sport may find unclear or confusing. Below is a list of glossary terms that are commonly used across the different aspects of rock climbing, including bouldering, sport climbing, traditional climbing, and rappelling.

Alpine Draw: A sling and two carabiners put together to make an adjustable length draw. A common term and device used during traditional climbing to prevent zippering.

Arete: The arete is the corner of a wall, where two faces meet. An arete can be used as hand or feet holds.

Back Clip: A back clip is when an individual clips into a draw in the reverse direction. This is dangerous because when a fall is taken the rope can become unclipped from the draw.

Barn-Door: When a climber barn-doors, their body swings away from the rock face and it becomes difficult to maintain a grip.

Belay Device: There are several kinds of belay devices and they each serve different purposes. A basic belay device is an ATC (air traffic control) used for simple belaying, belaying from above, and double rope rappelling, but not for lead belaying. A grigri, or other assisted braking device, adds mechanical friction to the rope when a fall is taken in order to be safer. It can be used as a belay device for lead or sport climbing, and newer models can be used for rappelling.

Belayer: The belayer is the person in lead climbing and sport climbing that controls the rope and the climber. The belayer will let out rope or take up slack.

Belay On: This is a term that the belayer says to let the climber know that they are ready to start belaying the individual.

Bolt: A bolt is an artificial piece of equipment for sport climbing that is bolted directly into the rock. A bolt will be used at the top of a route for anchors, or as the route ascends for quick draws

Bouldering: A type of climbing that involves no ropes or harness and results in a ground fall every time.

Brake Hand: Brake hand, or break hand depending on the climber’s vocabulary, is the hand that must always be on the rope during a belay or rappel sequence. The brake hand will pull the rope into a position that adds the most friction to prevent it from sliding through the belayer’s hand or the belay device.

Climbing: This is what the climber says to the belayer in order to let them know that they are ready to begin climbing.

Climb on: The belayer’s response to “climbing”, and lets the climber know that they are clear to begin ascending.

Crimp: A crimp is a type of hold that only uses the tips of the fingers minus the thumb. This hold is particularly hard because it places stress on the tendons and is difficult to maintain grip.

Clipped: Clipped is what the climber shouts to the belayer to let them know that they are clipped and the slack can be removed from the rope.

Clipping: Clipping is the term shouted by the climber while leading in order to let the belayer know that they are clipping into gear. This is a vulnerable time for the climber because they can easily be pulled off balance, and this is when their fall will be the largest as they have the greatest amount of slack in the rope.

Draw: A draw is a slang term for a quick draw. A quick draw is a piece of equipment that you clip into a bolt and then clip the rope you are climbing with into the draw. This is used in both sport and traditional climbing.

Dynamic Moves: Dynamic moves, or dynos, are movements that are powerful and cover great distances with greater strain to the climber.

Dynamic Rope: Dynamic rope is used when top roping or lead climbing in order to absorb the most shock and keep the climber the safest.

Falling: Communication is important, especially when you are leading! Letting your partner know that you are falling is simple and easy.

Flag: When the inside of the foot is placed against the wall to prevent barn-dooring, or swinging wildly on a route. This saves the climber energy and keeps them balanced.

Figure 8: A figure 8 is a device used in single rope rappelling.

Harness: A harness is a life saving piece of equipment that is essential for all types of climbing except bouldering. This is where the rope and all of one’s gear is attached.

Jug: A jug or a bucket is a type of hold that allows the climber to get a grip that is around and in a surface sticking out, like grabbing the lip of a bucket or a cup.

Leading: Lead climbing is when an individual must clip into bolts as they ascend. Leading is the act of being the first from a group up a route, and this individual traditionally sets up an anchor and then gets lowered. This can be done in trad climbing or sport.

Mantle: A mantle is a move where you use strength and pull yourself up past larger holds instead of standing up.

On Belay: There are a series of terms that are said before a climber should even begin to ascend. On Belay is what the climber says to their belayer when they clip or tie in to the rope.

Pinch: A pinch is a hold that is similar to a crimp except the thumb can be involved on a pinch. The motion is similar to pinching someone, where you grip a protrusion in between your fingers and thumb.

Rap: “Rapping off a route” means to rappel. Rappelling is an added bonus to climbing, and is quicker and easier than hiking back around to the bottom of a route. Done to clean an anchor and pick up any gear left on the rock face.

Seconding: Seconding is the individual that climbs a route second. They are on-belay the whole time and are top roping. The second removes gear (draws and trad gear) as they ascend.

Shoes: Shoes or boots are essential and common used items. Used to help climb, they have rubber soles and rubber pads on the toes and across the heels to aid in grip and climb.

Slack: Slack is when the rope is not tight against the climber or the anchor. Keeping a rope tight can pull a person leading off a wall, and while top roping, slack will lead to a larger fall than expected, so it can be both a tool and a hindrance to the climber.

Sloper: A sloper is a type of hold that slopes down and a climber cannot really get a good grip on.

Smear: When a climber places their foot flat on the wall and bears weight in order to get traction against the wall.

Sport Climbing: Sport climbing is climbing with pre-bolted routes. This can include top rope only and lead climbing.

Static Moves: Static moves are moves that are precise and controlled.

Static rope: A static rope is a rope that does not have stretch at all. Stretch will let the rope absorb more shock safely. Static rope is mainly used for ascending and rappelling.

Taking a fall: Taking a fall is simply when you fall while leading or top roping. A general phrase that indicates that you fell

Third Hand: The third hand is a term used in rappelling, and is referring to equipment that will allow you to weight it and not fall. The third hand is used as a backup, and your brake hand should always be on the rope.

Top Rope: Top rope is a subsection of climbing that is only done with an anchor already in place. You can either have a route that has an anchor and rope already set up (most common indoor climbing), or you can set up an anchor and route before you start climbing. If you can approach a set of bolts where an anchor is meant to be set up, then you will be able to set up the route prior to climbing. Top roping is a progress keeping style of climbing, so it is not free climbing. This style has a belayer and is considered safer and easier.

Trad rack: Trad gear includes all the gear that one would use during traditional climbing and is referred to as a group usually. This can include cams (a modern type of gear that has a spring loaded cam to lock into the wall) and hexes and nuts (hard shaped devices that are inserted into cracks and crevices to pull hard against the rock face and act like a bolt).

Whipper: A whipper is a big fall while leading. It can happen when an individual is trad climbing or sport climbing, and if someone falls incorrectly it can lead to injury.

Z-clip: A z-clip is when an individual clips in the wrong order for their draws. This usually happens when the bolts are close together, the individual takes the rope that is starting to come through the first draw in an order and clips that into the second draw, instead of clipping from ones harness. This is dangerous because it adds extra friction and wear on the rope and until the next clip the climber is falling from the first clip instead of the second, leading to a harder fall.

Zippering: Zippering is a term that is used during trad climbing mainly. It refers to when you take a fall and the force of the fall removes gear from the wall itself. This can be very deadly and very dangerous.