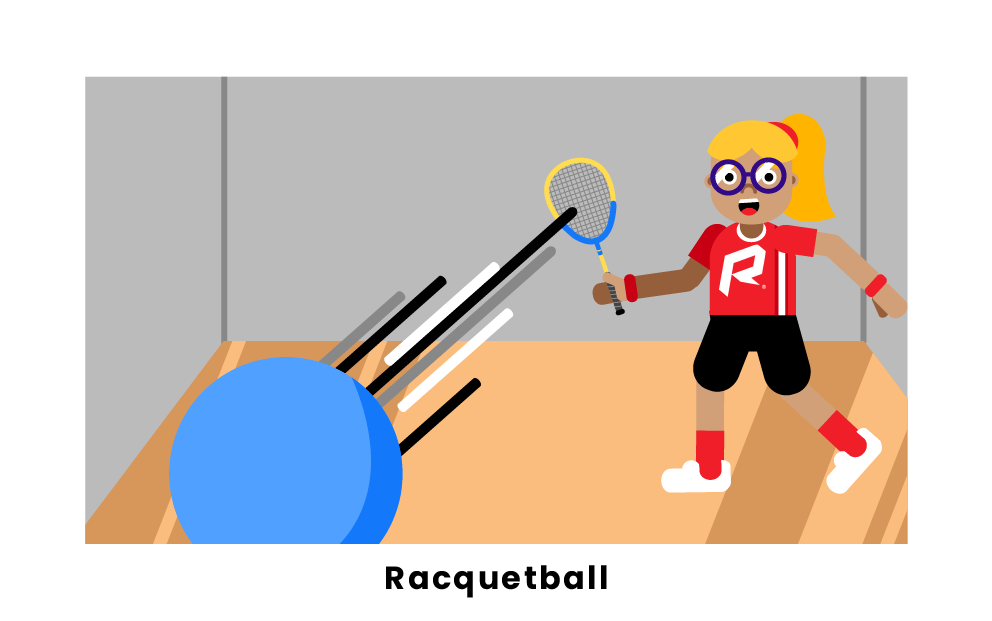 Racquetball is a sport played in a court with a wall, two or four players, racquets and a ball. Racquetball is similar to tennis, handball, or squash where the goal is to hit the ball before it takes a second bounce. Players will take turns hitting the ball against the wall. The goal is to make the other person miss the ball. If they do you win a point. Racquetball is a popular sport because it is fast paced and relatively easy to play.

Racquet sports have been around since the 12th century in France. Racquetball itself originated in the United States in the 1940s. Joseph G. Sobek created a rubber ball at his job in a rubber factory. Sobek loved tennis and squash and he thought he could make a fast paced and fun game using the rubber ball. Sobek created the racket used in racquetball and set up some of the rules. Racquetball officially became a sport in 1968 when rules were written out by Robert Kendler. 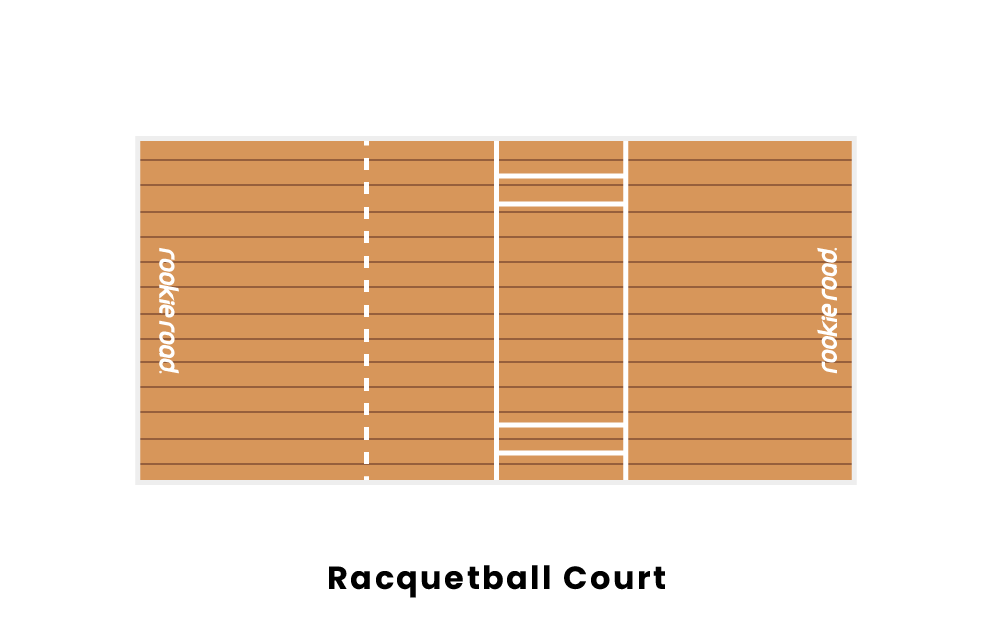 The most important part of the playing surface for racquetball is the wall. You can play racquetball casually with friends as long as you have that wall to hit the ball off of. For more official racquetball you need to be in an enclosed four walls. Official racquetballs have to be about 40x20x20 feet. You are allowed some variation, 4.8 inches for length, 3 inches for width and height. Racquetball courts will usually be made of cement if they’re outside and hardwood inside. Indoor and official courts will have markings for the service box, short lines, and back walls. 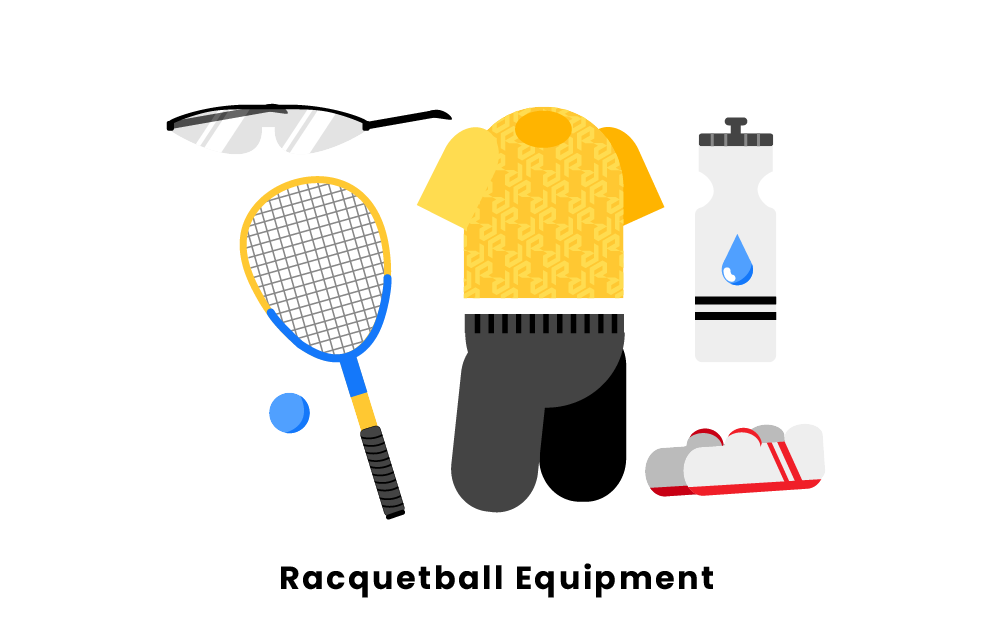 The equipment for racquetball is pretty simple. This is partially why the sport is popular and accessible for people to play. The two essential pieces of equipment are:

Some extras that you’ll need if you want to be more advanced at racquetball include:

There are various types of racquetball. There are singles, aka 1v1, doubles aka 2v2, and cutthroat, aka 3 person racquetball. The basics of gameplay are the same for all three versions of racquetball. One player serves from one side of the court by hitting the ball against the front wall. The opposing player has to hit the ball back against the wall before it takes a second bounce. The ball can hit any other wall as long as it touches the front wall before hitting the ground. 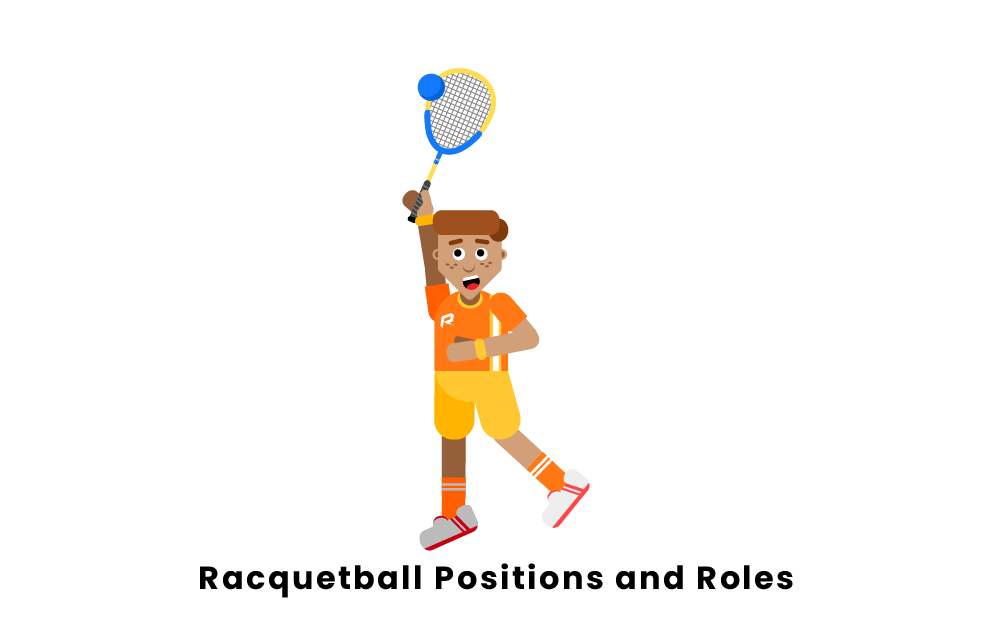 In singles racquetball there are no positions. The player has to cover the entire court, as does their opponent. In doubles the way you split the court is up to you. Most teams will have one person on the left and one on the right but as the rally progresses you will want to move around and adjust so you cover as much of the court as possible. In cutthroat racquetball it’s 1 v 1 v 1 so again you have to cover the entire court but this time you have two other people to avoid instead of just one. 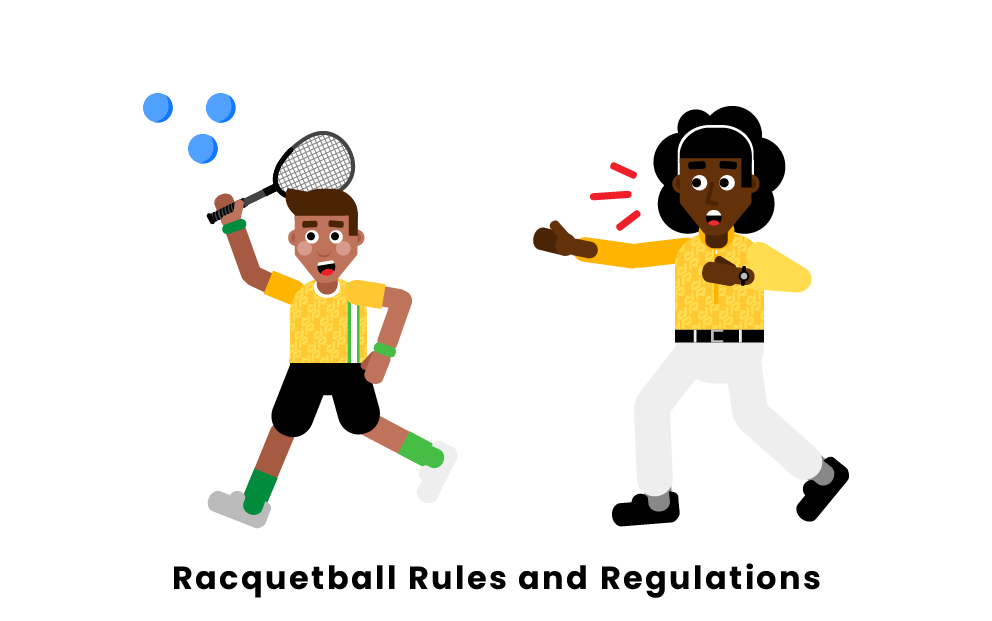 The most basic rules of racquetball is that each person has to hit the ball against the front wall before the ball takes a second bounce. For a casual game those are pretty much the only rules you’ll need. You can also always make up your own rules as long as both parties agree to them before the game starts. In official racquetball the rules are more complicated.

Serving Rules: To properly serve you have to have both feet inside the serving box. The ball has to cross the receiving line, and has to bounce on the floor on the serve.

Hinder: A hinder is the racquetball term for when one player gets in the way of another. Since both players are on the same court it is only natural that it happens sometimes. Though it depends on the situation, for the most part when hindrance occurs you just replay the rally. 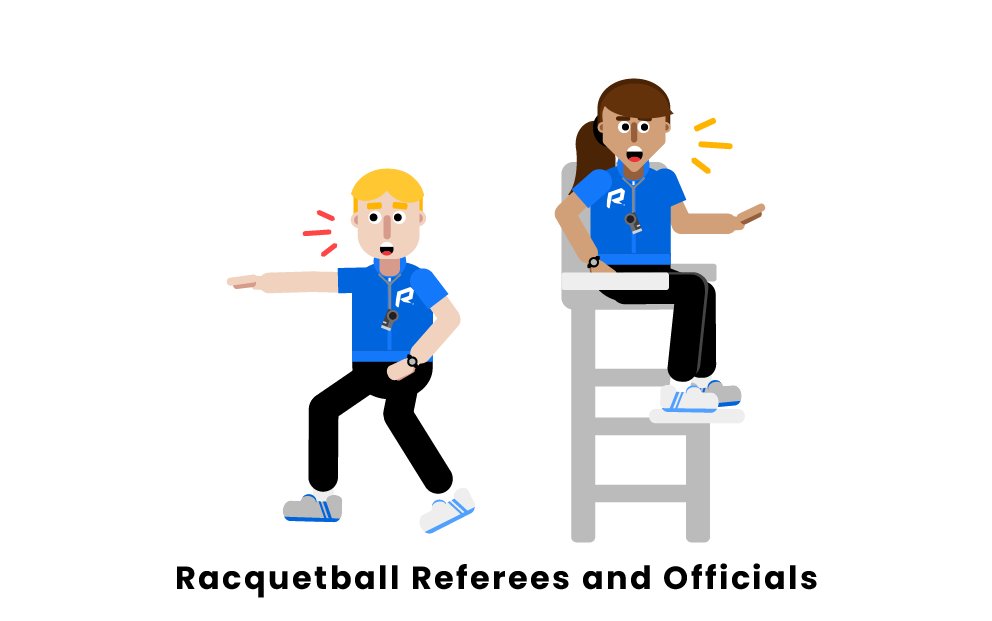 The main official for a racquetball match is the referee. Referees are assigned to one court and they are in charge of the rules as soon as the players walk onto the court. The referee has total jurisdiction over the match. They watch from the outside looking for proper serving, double bounces, illegal hits, and most importantly hindrances.

Line judges are used for more advanced  matches. Line judges stand to the side and watch the lines especially on serves. They can also make calls on double bounces sometimes. If a referee makes a call that a player disagrees with they can appeal. If both line judges agree they can overturn the referee's call. 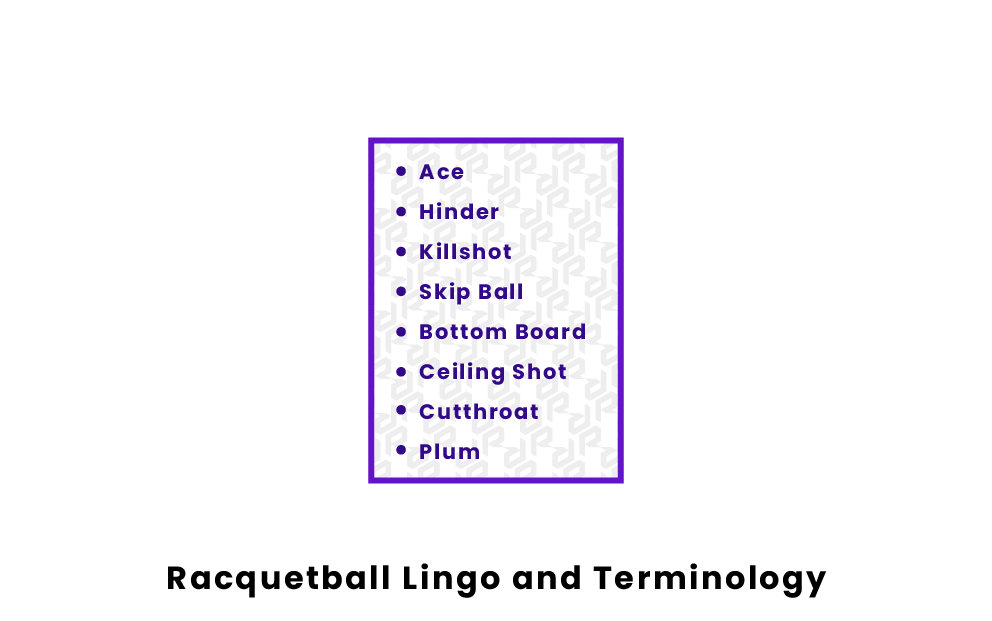 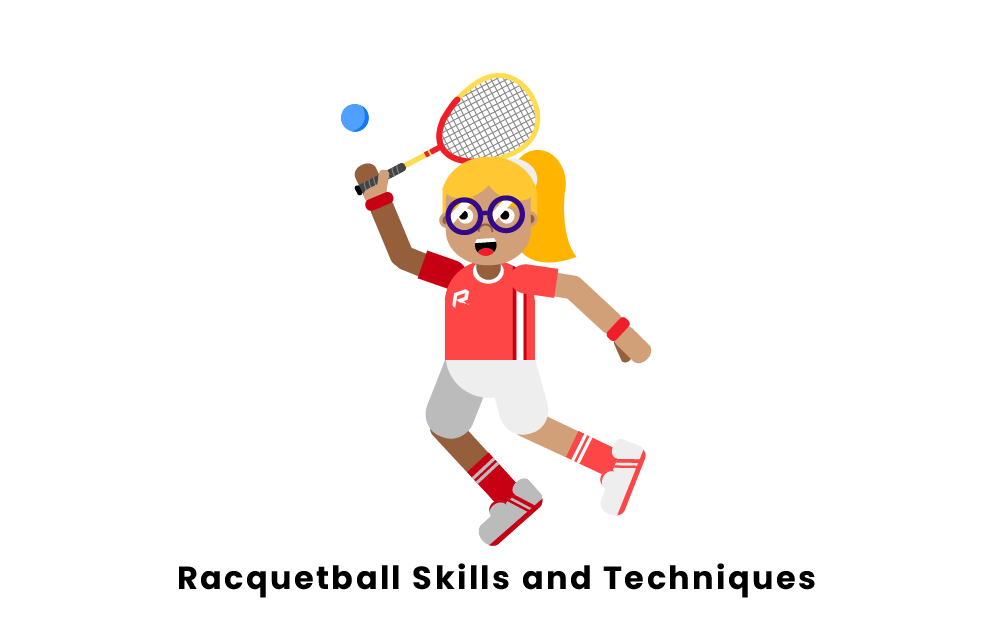 Racquetball is a highly technical sport.  In order to outplay your opponent, you will need to take advantage of your skills. It isn’t usually the strongest racquetball player who wins but the most technical.

Then you also have the spin. Sometimes hitting the ball hard is best but sometimes you want to “cut” or spin the ball in certain directions. The most simple of these is the slice where you cut down on the ball to give it backspin. This might take practice but you can get good at it quickly and keep your opponent guessing.

If you wanted to describe the strategy for racquetball in one sentence it would be this; hit the ball where your opponent can’t reach it. Of course that’s easier said than done. The first part of strategy is placement on the court. The best place to be is in the middle. In the middle you can get to balls on either side. Then you also want to adjust. If your opponent plays further back you should play further back. If they move closer to the wall you should move closer to the wall. Then you want to hit the ball in the best place to win a point.

Usually you want to hit the ball as low on the wall as possible. This will make the ball bounce low and will be harder to return. Of course strategy only gets you so far. In a match you’ll have to adjust and just react depending on what your opponent does.

Since racquetball is played against a wall it’s actually fairly easy to do drills on your own. The best way to get better at racquetball is to hit the ball against the wall. To start you want to bounce the ball to yourself. This helps you practice hard aggressive shots. As you progress you can keep rallying with yourself against the wall. Another good drill to do is the ceiling ball drill. The goal is to hit 50 good ceiling balls. As you get better you can do them consecutively. If you master the ceiling ball you’ll be hard to beat in game.

Getting involved in racquetball as a kid is a great way to be active and play a good sport to play to have a good time. You can play racquetball at the park as long as there’s just a wall. If you want more organized racquetball there are organizations:

Unless you’re a professional player, racquetball leagues will be specific to your location. For the most part gyms that have racquetball courts will host leagues. You can usually join by yourself for singles or with a partner for doubles. Here are a few popular racquetball leagues:

Racquetball is a ball sport played with racquets and a rubber ball. The object of the game is to hit the ball against a wall and beat your opponent. If the ball bounces twice before your opponent can hit it you’ll win a point.

Are squash and racquetball the same thing?

How do you play racquetball?

The way to play racquetball is to swing the racket at the ball in a down to up motion. The swing is highly technical. Basically you want to react and hit the ball against the wall no matter where your opponent hits it.

Where is racquetball played?

Racquetball can be played anywhere with a wall. However, for official racquetball games you’ll need to be inside. The court will need four walls. Usually the back wall is made of glass. The court will have lines on the floor for serving.

Pages Related to What is Racquetball?