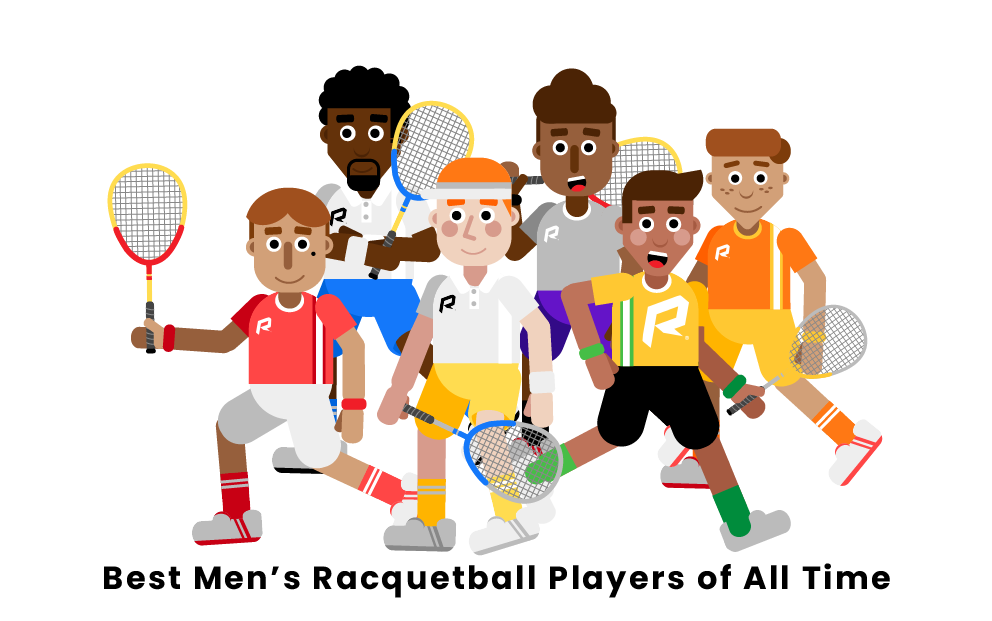 Racquetball is one of the most fast-paced games in the world. Playing it at a high level requires excellent reflexes, quickness, and the ability to stay focused on the ever-moving ball. Players are set in a tiny court where they go head-to-head with their opponent, and they cannot allow the ball to bounce twice before hitting it. Read on below to learn of the six best men’s racquetball players in the history of the sport.

Who are the best men’s racquetball players of all time?

Kane Waselenchuk is undoubtedly the best male athlete ever to pick up a racquetball racket. He has won the U.S. Open, the only major in the sport, 15 times; that is 11 more than any other competitor. The southpaw from Canada has a total of 123 tournament wins on the International Racquetball Tour (IRT). From 2009 to 2012, Waselenchuk went on a winning streak of 134 straight matches, by far the most ever. He even recorded the 600th match win of his career in 2020, a number that stands alone in the world of racquetball. Waselenchuk has also notched four U.S. Open doubles wins in his career, doing so in a six-year span from 2014 to 2019.

Waselenchuk may be the most-decorated racquetball player of all time, but the game would not look the way it does today without Marty Hogan. Competing from the late 1970s through the 1980s, Hogan revolutionized the game of racquetball. He brought power to the game that had not been seen before, setting speed records with his serves and overpowering opponents. Hogan won five-straight national titles from 1978 to 1982 and, during that same span, also reached the finals of 62 consecutive tournaments, winning 56 of them. Hogan was inducted into the International Jewish Sports Hall of Fame as well as the St. Louis Hall of Fame, where he was born.

Sudsy Monchik was all business when he stepped on the court. Perhaps the best junior racquetball player ever, Monchik converted success in his youth to professional fame, finishing as the number one-ranked player five times in his career. In addition, he took home four U.S. Open titles, second all-time only to Waselenchuk. Monchik possessed a rare combination of power and speed, but it was his backhand that drove him to glory. Many consider his backhand to be the best in the sport’s history, a talent that allowed him to pull off amazing shots.

There might not be a more intense player in the history of the sport than Cliff Swain. Known for a dominant serve, Swain played with a palpable passion and a determination to win. In 1990, as a 24-year-old and the current world number one, Swain decided to leave racquetball to pursue a career in tennis. Though he did find some success, he was not nearly as dominant as he had been previously, and in 1992 he returned to racquetball to reclaim his number one spot. In 1997, Swain won his first U.S. Open, and he did so again in 2001.

Rocky Carson is possibly the most well-traveled member of this list, medaling in five different Pan American Games during his career. As a member of Team USA, Carson has three gold medals for singles, two silver medals for teams, and three bronze medals split among singles, doubles, and teams. He’s won the International Racquetball Federation (IRF) Singles World Championship five times, a record amongst men. He was first ranked number one in the world during the 2007-08 season, and he regained that standing again following the 2017-18 season. Carson’s longevity might be his most impressive trait, as his professional career has spanned nearly 25 years.

Though Charlie Brumfield’s resume may not be as loaded as the other members of this list, he undeniably impacted the game. Brumfield is widely credited as the driving force behind the rise of outdoor racquetball and its acceptance in the professional community. Brumfield convinced many indoor pros to compete in outdoor tournaments, and within a few years, outdoor racquetball became as legitimate as indoor. Brumfield was also a noted paddleball player, winning the first-ever National Paddleball Association (NPA) singles tournament in 1969.

Who is the greatest men’s racquetball player of all time?

The greatest men’s racquetball player of all time is Kane Waselenchuk. With 15 U.S. Open titles, there’s no question that Waselenchuk is the greatest ever to pick up a racket. His dominance on the tournament scene was second to none, winning over 70% of the tournaments he appeared in during his career. Waselenchuk has recorded over 600 wins and even went on a 134-match win streak at one point, by far a record in the sport.

Who has won the most Men’s Singles World Racquetball Championships?

Rocky Carson holds the record for most Men’s Singles World Racquetball Championships at five. He has also won 24 IRT tournaments in his career and has a trophy case full of medals. Competing at both the IRF World Championships and the Pan American Games, Carson has a total of eight gold medals for singles play and has racked up 13 medals overall.

Who has won the most Men’s Doubles World Racquetball Championships?

Alvaro Beltran and Javier Moreno are tied for the most Men’s Doubles World Racquetball Championships with four wins each. Moreno and Beltran won their championships over the course of a 16-year span from 2006 to 2021, and each did so with two different partners. Moreno and Beltran were partnered together for their first three wins each, but in 2018, Beltran won with fellow Mexican Daniel de la Rosa. In 2021, Moreno came back with new partner Rodrigo Montoya and won the championship.