What Are The Rules Of Quidditch? 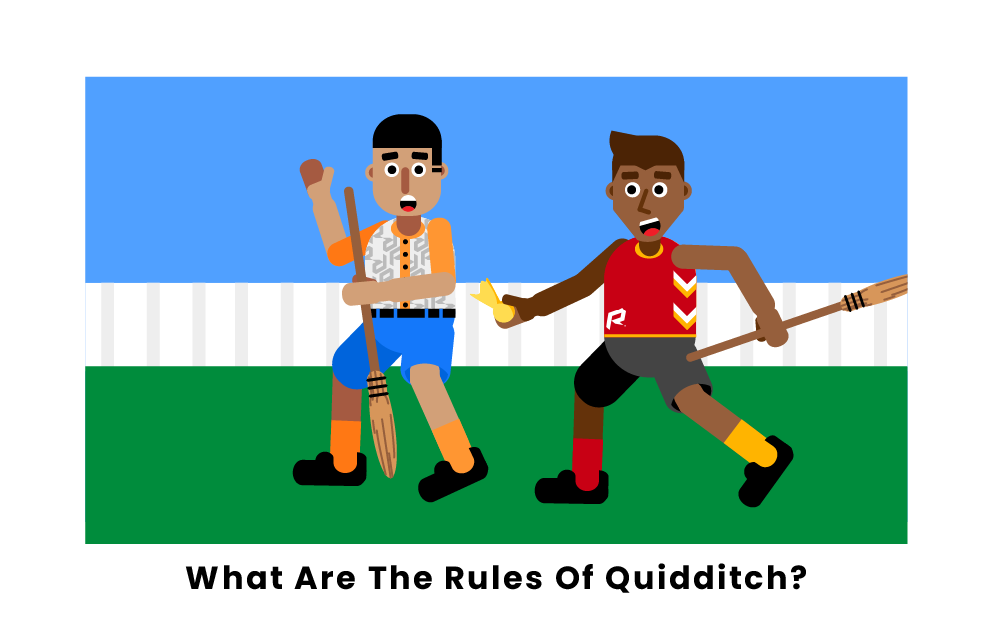 Quidditch is based on the popular game from the Harry Potter books. Although originally played by witches and wizards, students from Middlebury College invented the real-life version of the game. Quidditch is a combination of rugby and basketball, with some elements of dodgeball and hockey.

There is no time limit during a quidditch game, as it usually ends with the golden snitch being caught. But on average, it takes around one hour to catch the snitch. A quidditch game begins when the bludgers and quaffle are placed in the center of the field. All the players begin with their eyes closed in the keeper zone, so no one knows where the golden snitch is. The referee begins the game by calling out “Brooms Up!” after the snitch is in a distant vicinity. Both teams must try to score more points than the other and in the end, the team with the most points wins. 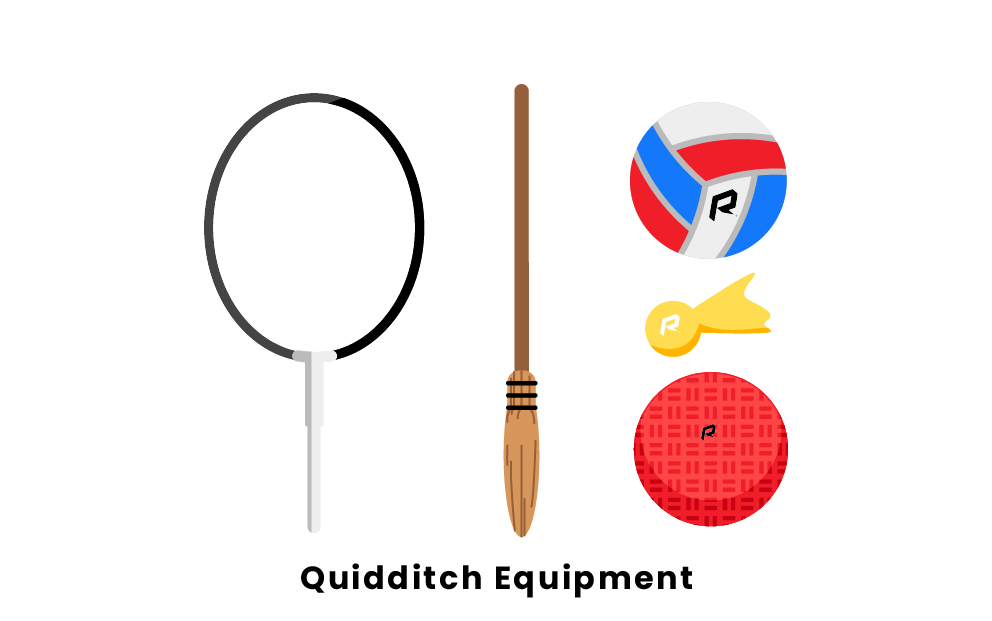 The objective of quidditch is to score more points than the opposing team. There are three types of balls used during the game: 1 quaffle, 1 golden snitch, and 3 bludgers. The quaffle is a volleyball that can be kicked or thrown into hoops. A neutral person acts as the golden snitch and will be wearing yellow. They will have a velcro tail attached to their shorts and the seeker must grab this to end the game. The snitch gets released 18 minutes after the start of the game and must avoid their capture. The bludgers are used by the beaters to distract the players and set them back. If an athlete is hit by a bludger, they must drop any ball they’re in possession of and touch one of the goalposts before they’re allowed to reenter the game to play.

Besides the three types of balls, the game requires broomsticks and three hoops. All players must have a broomstick held between their legs at all times. The broomstick can be made out of PVC piping or wood. There will be three hoops placed on each side of the pitch. They will all be at different heights of 1 meter, 1.4 meters, and 2 meters. The hoops are placed two broomsticks apart from each other. 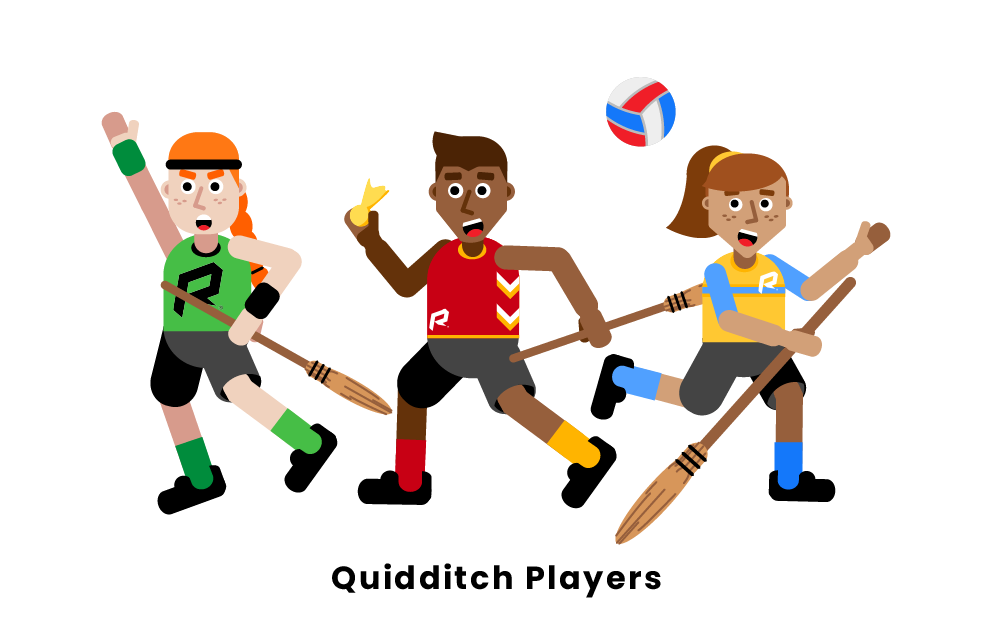 Each team has 7 players: 1 keeper, 3 chasers, 2 beaters, and 1 seeker.  The chasers throw the quaffle by kicking or throwing it into hoops where each goal is worth 10 points. The beaters disrupt other players by using the bludger. The keeper helps guard the hoops against the chasers from the other team. Lastly, the seeker will end the game by chasing and catching the snitch by scoring points. The snitch is worth 30 points and the seeker must grab the snitch. In case the match ends in a tie after the snitch is caught, the match will go into overtime.

To score in Quidditch, this can be done by the chasers who can score 10 points by gaining possession of the quaffle and throwing into the opposition’s hoops. They also gain points when the seeker gets possession of the golden snitch and scores 30 points. Overall, the team with the most points will win the game, and usually, the game is ended by the snitch being caught. But, there is a misconception that getting the snitch will end the game, but this is not always the case. A team can potentially win if they still have more points than their opponents even if they did not catch the snitch, but this scenario is rare. 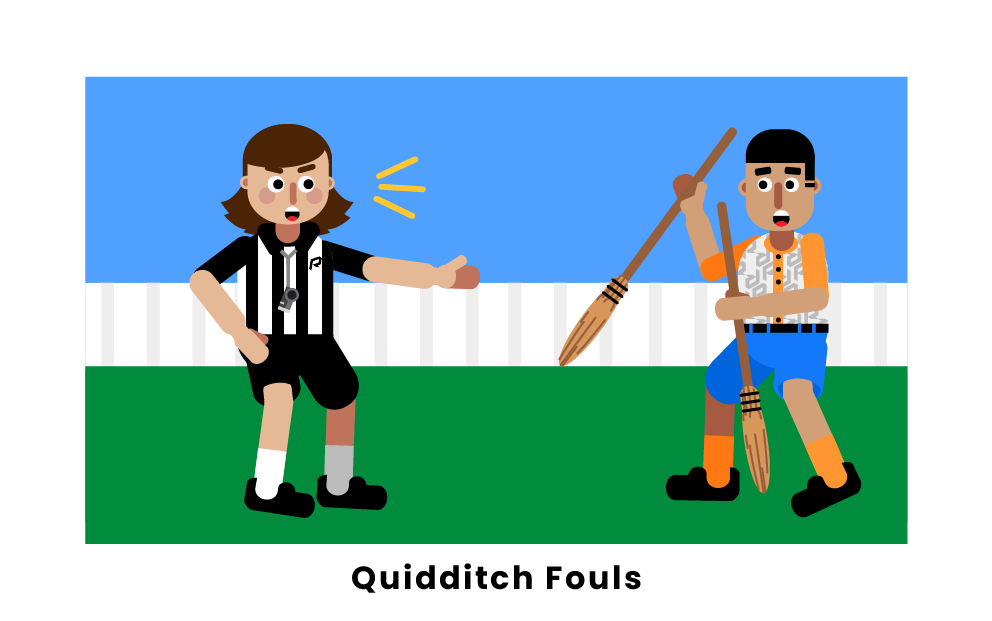 How many players are there on a quidditch team?

There are seven players on a quidditch team. There are 3 chasers, 2 beaters, 1 keeper, and 1 seeker. The chasers use the quaffle by throwing, kicking, or passing the ball into the hoops. The beaters use the bludgers to distract the opposing players and disrupt the flow of the game. The keepers defend the hoops from the opposing chasers. Lastly, the seeker has to chase and catch the snitch to end the game.

What equipment do you need?

All players will need a broomstick which they hold in between their legs. They will not be allowed to get out of them. Every game also has 3 hoops on each side of the pitch. There are also three different balls used: the quaffle, bludger, and golden snitch. The quaffle is usually a volleyball then used by chasers and thrown into the hoops on each end of the pitch. The golden snitch is usually a neutral person wearing yellow, with a tail attached to their shorts.

How do you score in quidditch?

Scoring in quidditch can be done through shooting the quaffle through any of the three hoops or catching the golden snitch. The quaffle earns a team 10 points and the snitch earns a team 30 points. The aim of the game is to score as many points as possible. But once the snitch is caught, it is most likely that the team has won, thus ending the game.

What are the fouls in quidditch?

Some of the fouls in quidditch are blue card, yellow card, red card, ejection, and back to the hoops. If a player gets a blue card, they cannot play the game for one minute and must remain in the penalty box. They can only come back to the game if the opposing team scores during this minute. A yellow card is similar but if a player receives two yellow cards, they will receive a red card. Lastly, a red card will ban the player from playing the rest of the game. The referee may eject a player if they commit major violations during the game. Lastly, a back to hoops means the player has stopped playing and returns to their hoops.

Pages Related to What Are The Rules Of Quidditch?