Quidditch is an up-and-coming sport known mostly for being the real-life version of a fictional sport in the world of Harry Potter, a popular series of children’s fantasy books authored by J.K. Rowling. In real-life quidditch, there are four positions: beaters, chasers, the keeper, and the seeker.

Each team has seven players on the field of play at a time. There are three chasers, two beaters, one keeper, and one seeker. Each of these positions carries out a different role for the team. The chasers’ role is to throw a Quaffle through the opposing team’s hoops. Beaters aim to knock the opposing team's players out. The beaters throw bulgers at opponents to temporarily knock them out.  A keeper’s role is to protect their rings from the chasers. The seeker’s only goal is to find and catch the golden snitch. If the seeker is able to find the golden snitch, their team automatically wins the game.

Quidditch is a full-contact sport where two teams of seven players, all of whom are mounted on brooms, attempt to score points by throwing a ball called a Quaffle through one of three differently-sized hoops. There are a number of important terms in quidditch, among them the different balls and targets that are used. Some necessary quidditch equipment includes:

As stated above, each quidditch team has seven players. The four categories of quidditch players are:

In quidditch, there are typically 14 players on the field at a time, seven for each team: three chasers, two beaters, one keeper, and one seeker.  Some players, however, may be temporarily suspended from play during certain circumstances. If a beater hits another player with a Bludger, for example, the player who was struck is required to dismount from their broom and run back to touch their own team’s goal rings. Once they touch the rings, they can mount their brooms and begin playing again. Although the player may be unable to participate while running to the rings, they remain on the field, and thus, 14 players are always on the field of play. 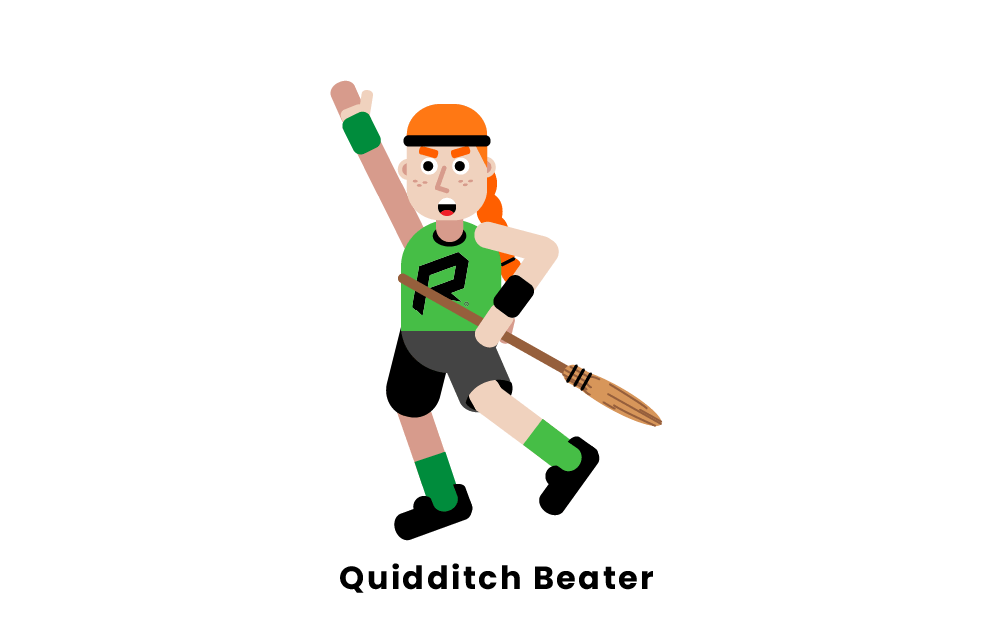 The beaters have the opposite goal as the chasers. The beaters aim to stop the chasers from scoring. Beaters are able to use Bludgers (which, in real-life quidditch, are dodgeballs the beaters throw at the opposition) to temporarily knock out chasers. There are two beaters in play, and they are the only ones able to use Bludgers. Their secondary goal is to defend their own teammates from attacks by opposing beaters with the Bludgers. If they allow the other team’s beaters to gain control of the Bludgers, then they put their teammates at risk.

Although beaters’ jobs appear simple, there is actually an extensive amount of strategy and precision involved. They need to decide when to throw the Bludgers or when to keep them in their possession. Beaters may also use their bodies to get in front of chasers and stop them from attacking. Beaters are often very physical and are not afraid to intimidate an opponent by throwing a Bludger or making contact. 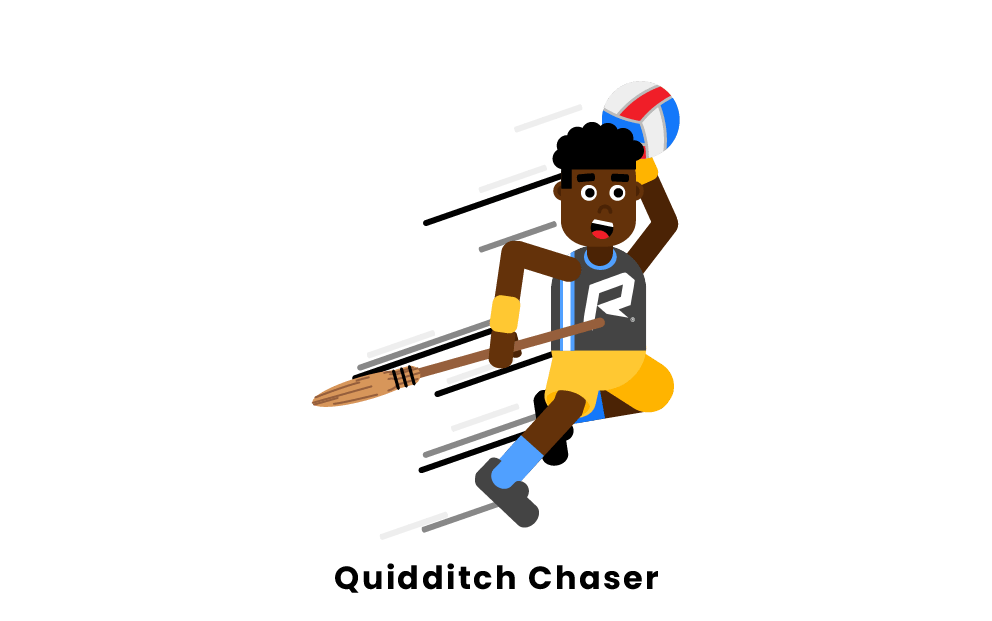 A chaser’s main goal is to throw a Quaffle through the opposing team’s rings. A Quaffle is a 12-inch red ball. The three chasers pass the Quaffle between each other as they move down the field. They must avoid the Bludgers being thrown at them by the opposing team’s beaters. If the opposing team’s beaters do hit a chaser with a bulger, then the hit player must get off of their broom and go back to touch their own rings. Once they touch the rings, they can get back into the game. Chasers have a tiring job of constantly chasing the Quaffle and attempting to fight through defenders. Quidditch is a full-contact sport, and it is easy for chasers to get double or tripled-teamed, causing them to be forcefully pushed down or have the ball stripped. 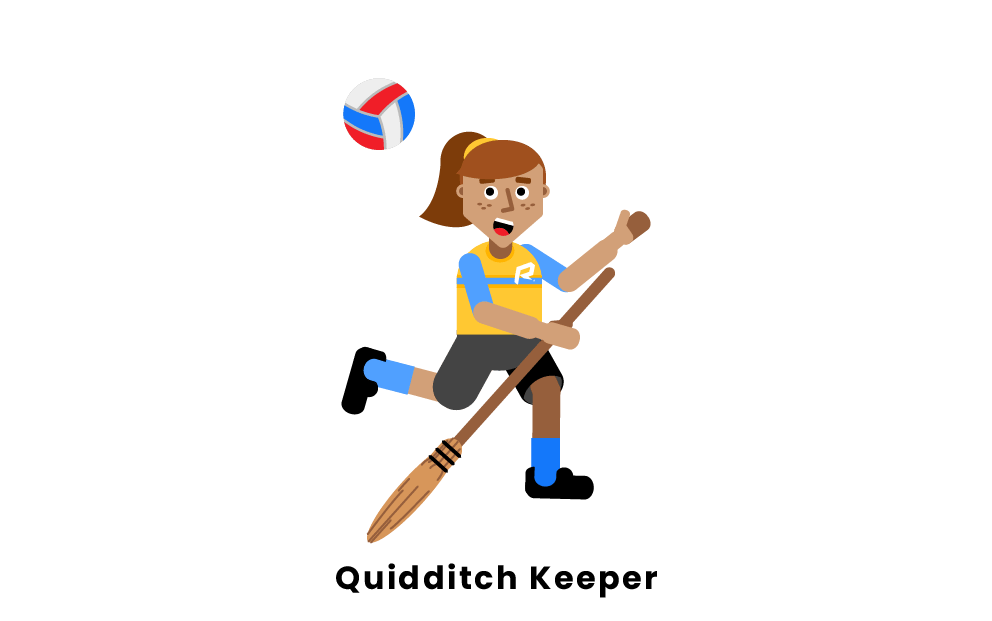 Keepers try to prevent the Quaffle from going through their team's rings. There are three rings for them to defend. Keepers must be athletic and able to move in all directions. The keeper in quidditch plays a very similar role to the goalie in soccer or hockey. They all have the same goal of protecting their assigned objects. The keeper is solely a defensive player and remains near the team’s rings at all times. 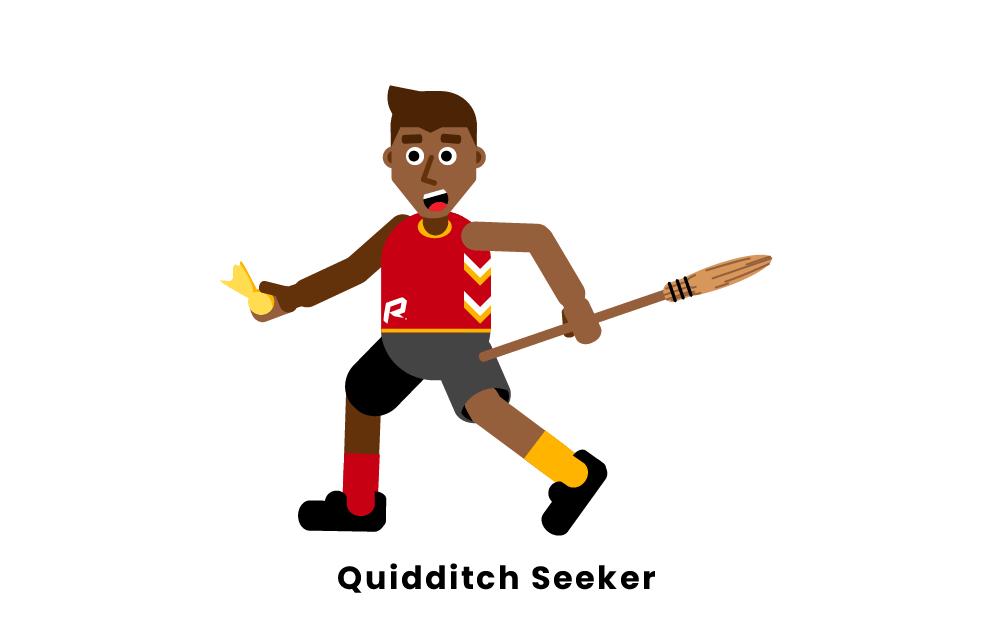 The seeker has the most interesting job. Their goal is to find and catch the Golden Snitch. The Golden Snitch is a small ball, usually a tennis ball, inside of a sock. This sock is then tucked into the back of the seeker runner's shorts. This runner is not a part of either team and is able to run freely. The seekers must find the seeker runner and pull the sock from their shorts. When pursuing, the seeker must keep the broom between their legs at all times. The match cannot end until the golden snitch is found. That means the game can last days, but seekers usually find the golden snitch within an hour. The seeker is usually a small and very fast player.

What is the best position to play in quidditch?

How many players are in a quidditch game?

During each quidditch match, there are 14 players on the field at each time, seven from each team: one keeper, one seeker, two beaters, and three chasers for each team. With each position having distinct roles and limitations, teamwork and communication are extremely important in this game.

How many positions are there in quidditch?

There are four positions in quidditch: the seeker, the keeper, the beater, and the chaser. There are a required number of players at each position that cannot be altered. There must always be one seeker, one keeper, two beaters, and three chasers. Every position has very specific goals and limits. Unlike some sports where certain positions are more important than others, in quidditch, it is very important to have a well-rounded team.

What position did Harry Potter play in quidditch?

In the fictional series of books and films, Harry Potter, the title character, plays the seeker position. The seeker spends the match looking for the elusive Golden Snitch; when it is found, the match is over. The role of the solitary searcher working toward a collective goal mirrored the character dynamics of the Harry Potter character.