What is a quidditch league?

A quidditch league is a collection of teams together that play cricket in an organized way. Like many other sports, playing against others drastically improves the experience. Out of this, leagues form. Quidditch leagues began in American Universities, specifically at Middlebury College, in 2005 as an idea to play a fictional sport. The J.K. Rowling inspired game grew from just a group of friends to a small league at the college to ultimately different schools competing against one another. Out of these leagues were formed. Today, quidditch leagues take on a much more official role, even publishing the official quidditch rulebook to maintain uniformity in the games. Quidditch as a sport has grown beyond just Middlebury in its small nook in Vermont and with that more leagues have formed, even on the international level. Quidditch leagues vary by region but many allow people to play recreationally and for fun, but organized. 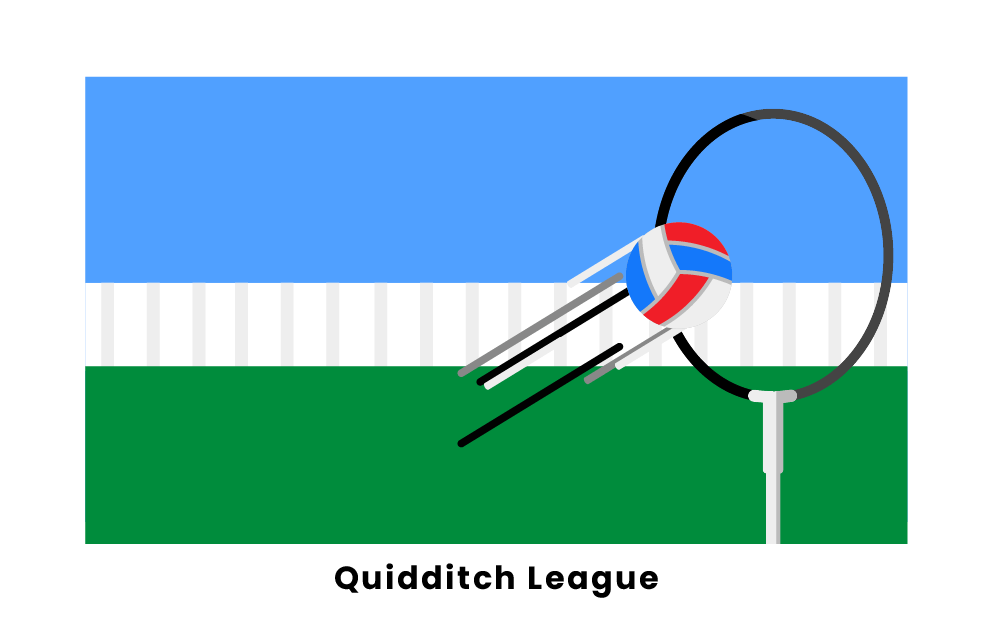 What is the most popular league in quidditch?

There are many quidditch leagues across the world. Starting with club collegiate quidditch, inside schools like Middelbury college and between different universities. By far the most popular and organized league in quidditch is US Quidditch. US Quidditch is a league that organizes matches for all teams in the United States, and a few abroad, both collegiate and recreational teams not organized by a university or college. Though schools are still the primary source of teams for US Quidditch there are others that are not affiliated with a University. US Quidditch's biggest tournament is undoubtedly the Quidditch World Cup. There have been twelve World Cups in the past, dating back to 2007. In 2007 the World Cup was played between Middlebury and Vassar colleges, with Middlebury winning. 2020 will see the thirteenth World Cup. In this tournament many teams, seperated by region play each other until a champion is crowned. US Quidditch has a wide reach and has cemented itself as the most popular league in quidditch.

How do you start a quidditch league?

How long is a quidditch league season?

Unlike other sports, quidditch league seasons are not a fixed number of games. Different teams are under different situations in different leagues and divisions. For US Quidditch, there has to be a minimum of eight games played by a team in order to qualify for their national tournaments. US Quidditch has those restrictions to ensure that only higher level teams qualify for their tournaments and can compete for a national championship. When it comes to the 2019-2020 season, teams have played anywhere from nine to twenty three games during the season. The top team in the country, the New York University Quidditch has ten games played and ten wins in those games. The second place team, Texas Hill Country Heat, has played nineteen games and won eighteen of those. As seen by this, quidditch league seasons vary based on the team and the region but US Qudditch does have minimums and requirements in order for teams to qualify for different tournaments, including the national tournament.

How much does it cost to join a quidditch league?

Quidditch is a fairly cheap game when it breaks down. All people need are an assortment of balls, dodgeballs, volleyballs etc. as well as some regular broomsticks to put between the players legs and then some sticks and circle shaped items, like hula hoops, to throw the balls through in order to score. In that, the basic leagues are cheap and can be affordable. Higher level leagues, US quidditch as an example have membership fees. For US quidditch in 2019-2020 that fee is 150 dollars per team. Unofficial teams can join for free but do not have the same kind of opportunities as the official teams that make it to tournaments. Teams also have to pay their referees, and sometimes even their snitches. Referees make fifteen dollars per team per game and snitches can be certified. When they are certified they also have to be paid by the teams playing the games, eight dollars a piece per game as well.

What are some top professional quidditch leagues?