How Does Scoring Work In Quidditch? 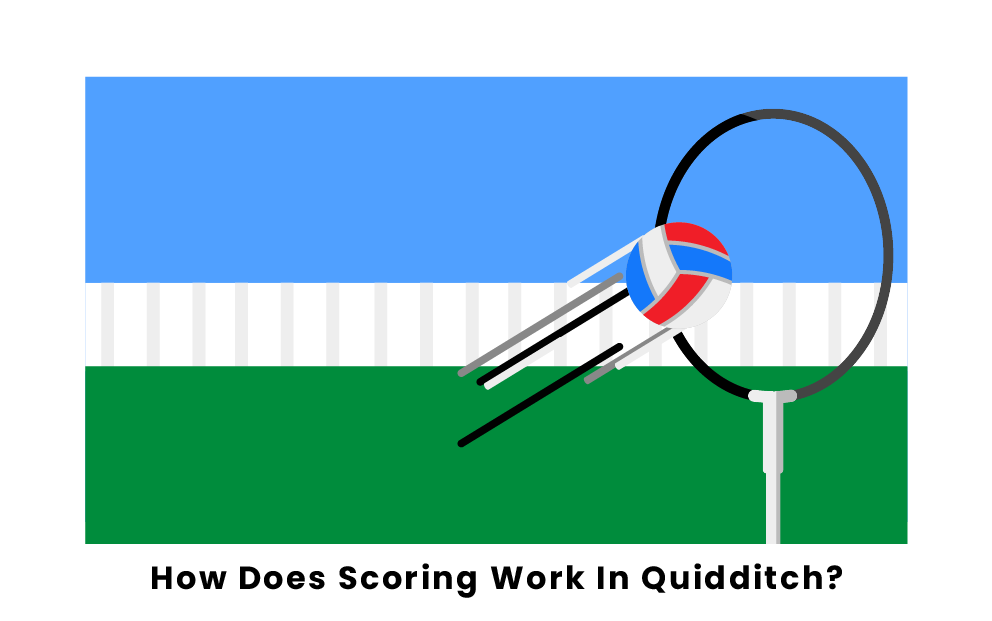 In Quidditch, teams can score points through two different methods: either by throwing the ball through the opponent’s hoops or by catching the Golden Snitch.

Quidditch is a fictional sport, originally from the famous Harry Potter series, that has been made into a popular real-life game. Each team consists of seven players that “ride” on broomsticks by holding them between their legs, attempting to score as many points as they can by the end of the game.

The most common way to score points in Quidditch is to throw the ball, known as the Quaffle, through the opposite team's three hoops to score a goal. Each goal is worth 10 points for the scoring team.

The Chasers are the players on each team that attempt to gain possession of the Quaffle and throw it through the opposing team’s goals. The chasers can pass the ball between one another, but only one is allowed in the scoring area at a time.

The Beaters and the Keeper are the defensive players on each team. Beaters attempt to stop the chasers by launching Bludgers, another type of ball, towards them. If a chaser is hit with a bludger, they must return and touch one of their goals before returning to play. The keeper is essentially the team’s goalie and defends the three goals.

The winner is the team with the most points at the end. While many have the misconception that the team who captures the Golden Snitch automatically wins the match, this is not always the case. In most matches, the team that catches the Snitch does win because of the 30-point bonus. However, if the capturing team is down by more than 30 points, they will still be at a disadvantage when the Snitch is caught and will lose the game. Therefore, a Seeker should not attempt to catch the Golden Snitch until their team is either winning or losing by no more than 20 points.

If the score is tied at the end of regulation, the game will enter overtime. The overtime period lasts for a total of five minutes or until the Golden Snitch is caught. If the score is still tied and the Snitch has not been caught after the five-minute period, the game goes into a second overtime. The second overtime is the last possible period of the game, and ends when a goal is scored, or the Golden Snitch is caught.

How many points do teams need to win a Quidditch match?

How does the snitch work in real-life Quidditch?

In real-life Quidditch, the Snitch is a tennis ball in a sock that is attached to the waist of a neutral player known as the Snitch Runner. The Snitch Runner wears a yellow uniform to resemble the real Golden Snitch and runs around the pitch, trying to avoid the seekers from both teams. It is important for the Snitch Runner to be fair and not give either seeker an advantage throughout the match.

Is real-life Quidditch the same as Quidditch in Harry Potter?

Although the real-life game of Quidditch may not be exactly the same as the original Harry Potter version, it does share many of the same strategies and gameplay. Instead of flying through the air on broomsticks, real-life Quidditch features players running around the field with broomsticks between their legs. Teams are awarded 10 points for each goal and 30 points for catching the Golden Snitch in real-life Quidditch. In the fictional version of Quidditch, scoring through a hoop is worth 10 points. However, catching the Golden Snitch is worth 150 points in the book version of the game. When the Golden Snitch is caught, the game is over, and the team with the most points wins. US Quidditch has its own rule book detailing all the specifics of the game.

When did real-life Quidditch begin?

The real-life version of Quidditch was first introduced by Xander Manshel and Alex Benepe at Middlebury College in 2005. Like the books and movies, players started off wearing towel capes to mimic robes and ran around with broomsticks between their legs. In November of that year, an intramural tournament was hosted with seven Middlebury teams competing. Since being founded, Quidditch has continued to evolve and become a popular competitive sport.

How many points is a goal in Quidditch?

A goal is worth 10 points in a Quidditch match. A goal in Quidditch is when a player is able to throw the ball, called a Quaffle, through the other team’s hoops.

Pages Related to How Does Scoring Work In Quidditch?