What are the rules of polo? 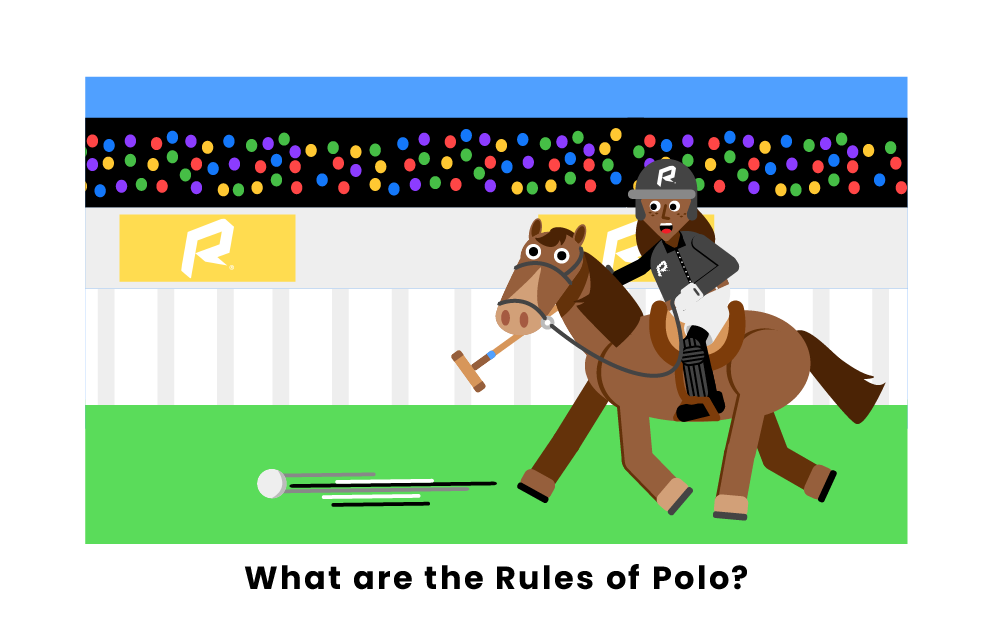 Polo is a sport played in teams. Each team will either consist of three or four mounted players. For polo that is played outdoors, four players per team are allowed to participate at a time. These teams can consist of all males, all females, or a mix of both. Teams can also be made up of a mixture of professional players as well as amateur players. Each player is equipped with what is known as a mallet. A polo mallet is made up of three main parts, the long thin stick, the handle, and the head. Mallets are typically made from wood, specifically tipa, and are 9 ¼ inches in length.

The game begins when an umpire throws the ball. The ball will be thrown in between the two teams. Each team will line up on their side of the field in numerical order, and this starting lineup will be used continuously throughout the game after each goal is scored. Each game will consist of four quarters, also known as chukkas in polo, and although they are each 7 minutes long, they can last much longer based on how many times the game stops.

There are two main phrases that everyone participating in and watching polo must know in order to truly understand the game. The first term LOB, or Line of the Ball, refers to the theoretical line that the ball follows after it has been hit. This term is important because this line creates a right of passage for the player that is in possession of the ball and moves the ball forward. This concept is also crucial to understanding polo because the majority of fouls in polo are based on this concept.

The second phrase that is vital to the understanding of polo is ROW. ROW is also known as the Right of Way, and it relates to two or more players that are in close proximity to the ball. This ROW also extends further in front of each player, but unlike LOB, ROW has nothing to do with the possession of the ball.

In order for the teams to be made up of all different variations of genders, ages, and ability levels, the implementation of handicaps is crucial. Handicaps in the sport of polo refer to a scale that is used to fairly distribute the skills of each player. This means that using a scale from 1-10, players are ranked based on how well they know the game, their hitting skills, the quality of the horse, horsemanship, and a few other game aspects. The handicap aspect of polo can be broken down into four different scales, and based on these sectors players can have multiple handicaps.

The first scale is based on a player's outdoor play. This refers to any play done on grass, and it can represent players of any gender. The second scale is based on an individual's indoor play. This scale is referred to as the “arena scale” and it is used for both genders when playing indoors. The third scale is the women’s outdoor scale, and is the same as the regular outdoor scale, but only applies to female players. Lastly, the fourth scale is the Women’s arena scale and it refers to only females playing skills when participating in indoor polo play.

There are six types of penalties in the sport of polo.

The first foul, known as penalty 1, occurs when a player has committed a deliberately dangerous violation in order to save their team from getting scored on. When this happens, a goal will be automatically counted towards the offensive team, and in addition the game will continue by starting up again with a penalty hit at the center of the field.

Penalty 2 refers to the penalty hit awarded to the team that was fouled. This penalty hit will be located either where the foul happened or at the thirty yard line in which is closest to the defensive team’s goal.

The third type of penalty, penalty 3, refers to when the penalty hit is located at the forty yard line closest to the goal of the team who caused the violation.

Penalty 4 will give the offensive team a free hit from the sixty-yard line that is closer to the goal of the team with the disadvantage.

Penalty 5 is special because it has two parts to it and therefore can mean two things. Penalty 5a will create a hit located at the same place that the foul was committed. This location will be altered in order to make sure that it is within four yards of the sidelines. Penalty 5b on the other hand will give the advantageous team a free hit located in the center of the playing field.

And lastly, penalty 6 will be used when a player of either team hits the ball over their team’s end line. When this happens a free hit will then be credited to the opposing team, sixty yards away from their end line.

Is there an age limit for polo players?

There is actually no age limit in polo. Players can participate at any age if they choose to, and if they are able to properly ride a horse while engaging in the competition. Because horse riding can limit some ability to play, most polo players are between the ages of five and seventy-five.

Is there overtime in polo?

Yes there is overtime in polo. Overtime only happens in games when the score is tied at the end of the last chukker. When a polo match goes into overtime, there are two options in which the game will proceed. Either the game will go into a shoot out where each player gets a turn to score on an undefended goal, or it will go into sudden death which consists of the game getting extended and the first team to score wins.

What equipment is required in polo?

Each polo player is required to wear and have in their possession specific equipment. The most important piece of equipment in polo is the helmet that the players wear for their own safety. In addition players must wear knee guards, and they must carry a proper polo stick.

Pages Related to What are the rules of polo?