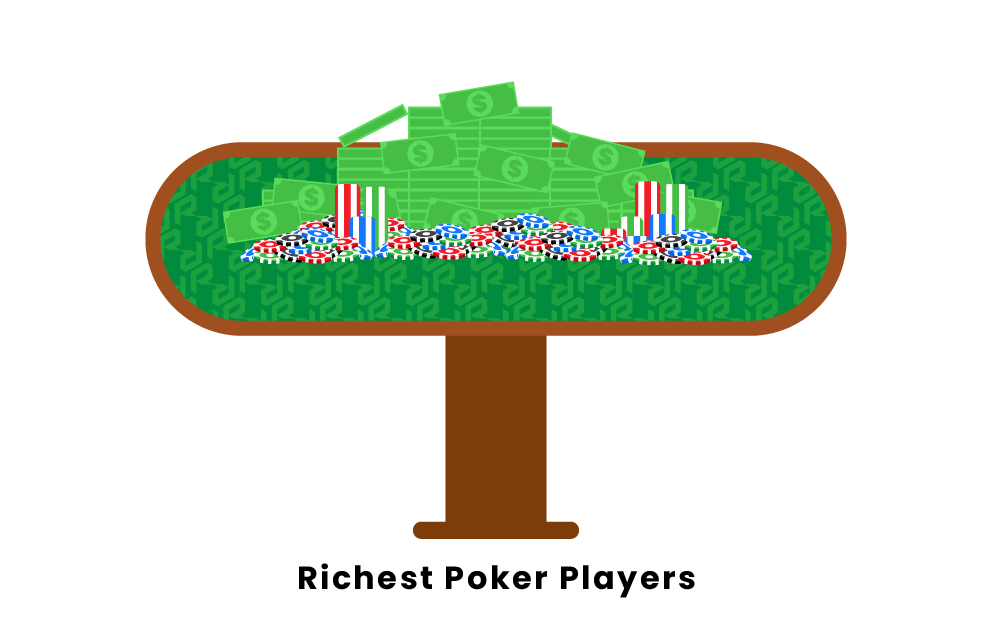 Poker is certainly one of the most lucrative sports in the world. Although, have you ever wondered who the richest players in the world of poker are? Read on to find out!

Who are the richest poker players in the world?

Phil Ivey is one of the greatest poker players of all time, and his net worth exceeds over $100 million. He has ten World Series of Poker bracelets and commonly plays in many other high-level leagues. A bracelet is considered the best non-monetary prize a poker player can win. Although Phil Ivey is sitting at the top of the net worth rankings, his biggest tournament win raked him in $4 million. While that’s a lot of money to win at once, the most money ever won off of one event was about $20 million, won by Bryn Kenney. The rest of Phil Ivey’s net worth comes from various TV ventures and commercial appearances.

Sam Farha’s net worth sits around $100 million, making him the second richest poker player in the world. Sam is a self-made millionaire who came to the US when there was a civil war happening in Lebanon. He has three World Series bracelets, and his largest tournament win earned him $488,241. However, his $100 million net worth doesn’t just come from poker. He amassed this wealth from various investments, books, and commercial/celebrity appearances. Sam Farha is considered one of the best, if not the best, poker players to ever come from the Middle East.

The next big name on the list is Chris Ferguson, who has amassed a net worth of $80 million. He’s been known as one of the poker greats and is dubbed as the “Jesus” of the game. However, in recent years his name became tarnished because he was caught up in a Ponzi scheme at Full Tilt Poker. Chris is a gifted software programmer and helped develop the Full Tilt Poker platform. Despite this event, Chris still holds a name for winning six World Series of Poker titles and $9 million of earnings solely from poker. Chris is known as one of the more quiet players in the game, never allowing his opponents to read anything on his face. Apart from the $9 million he won in poker, Chris has also added to his net worth by developing gaming software. It is often speculated how much he earned during his time with Full Tilt Poker.

Doyle Brunson, the 87-year-old legend known as “Texas Dolly,” is one of the more iconic players in the sport and currently has a net worth of around $75 million. Hailing from Texas, Doyle Brunson has had a 50-year-long poker career. He is a two-time World Series of Poker winner, winning the main event both times. Doyle was also the first player ever to win a million dollars in a single poker tournament, and like Phil Ivey, he holds ten different World Series of Poker bracelets. Outside of playing poker Doyle has written two different books on poker, which have also added to his net worth.

Although Bryn Kenney might not be the wealthiest player on this list, he does hold the title for the most money won off of a single event and has a net worth of $56 million. This happened back in 2019 at the Triton Million Charity event in London when he won $20.5 million. Bryn Kenney’s win at this tournament amounts to over one-third of his net worth. Unlike the other greats listed here, Bryn Kenney has earned nearly all of his money from poker. He is the highest-earning poker player of all time.

Daniel Negreanu is another poker player who has accrued impressive wealth, with his net worth coming in at $50 million. He sits as the third highest-earning poker player ever. Although his net worth doesn’t compare to the people at the top of this list, he is considered one of the most popular poker players of all time and has the nickname “Kid Poker.” He has two World Series of Poker bracelets, and he is the only player to have been crowned poker player of the year twice.