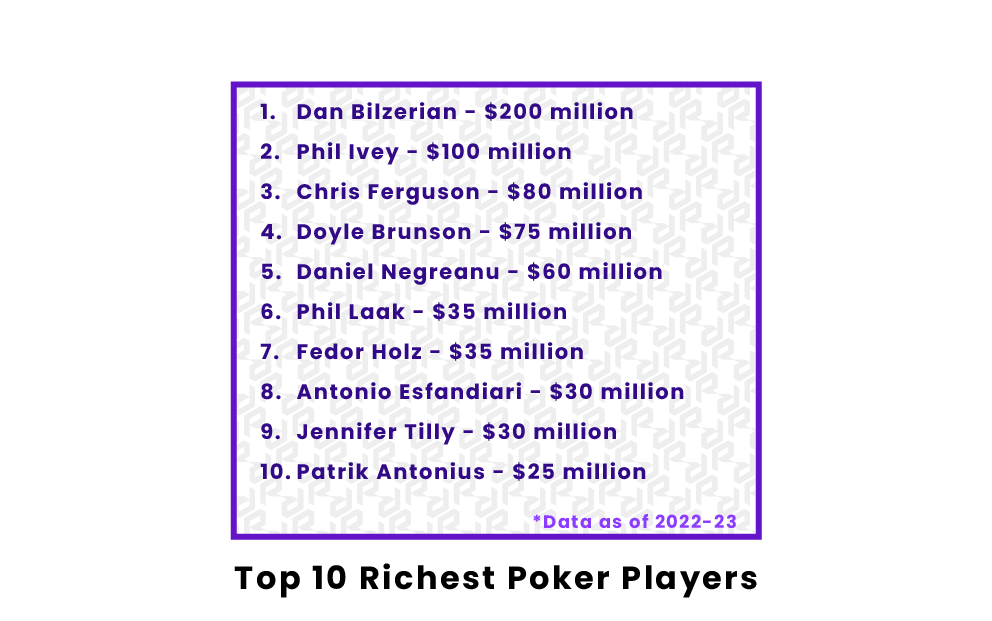 Poker is a gambling and casino game that has been around for a very long time. The game is popular amongst many people, as players can decide to bet with small or large amounts of money or even none. Some players have distinguished themselves as being the best, winning millions along their professional poker journeys. Here are the top 10 richest poker players in the world.

Who are the Richest Poker Players in the World?

Dan Bilzerian is by far the richest poker player, having a net worth of $200 million. Additionally, Bilzerian is likely the most widely-known poker player due to his branding and massive social media following. Bilzerian was born in 1980 in Tampa, Florida. It is believed that Dan Bilzerian initially came into his fortune from his wealthy father, who set up a trust fund for Dan at a young age. Bilzerian eventually found success in high-stakes poker games and investing. Along with his poker success, Bilzerian branded his identity and amassed a large social media following which showcases his lavish lifestyle.

The second-richest poker player is Phil Ivey, coming in with a net worth of $100 million. Phil Ivey was born in 1977 in Riverside, California. While he was young, Ivey moved to New Jersey and began practicing his poker skills while in high school, using a fake ID to bypass regulations. In 2000, Ivey entered his first World Series of Poker Tournament, showcasing the skills that he had learned playing poker as a teenager.

Chris Ferguson is the third-richest poker player, having a net worth of $80 million. Born in 1963 in Los Angeles, Ferguson began playing poker as a child, continuing his hobby throughout high school and college. Ferguson went on to earn his Ph.D. in computer science but decided to pursue playing poker instead. Chris Ferguson first entered the World Series of Poker in 1995 and quickly became successful professionally following his many years of practice.

Doyle Brunson has a net worth of $75 million, making him the fourth-richest poker player. The poker veteran was born in 1933 in Texas. Originally, Brunson was set on becoming a professional basketball player, but following an injury, he gave up the dream and pursued work in sales. Poker was never the main focus for Brunson until he won a casual poker tournament and earned more than he made in an entire month of his day job. From then on, Brunson pursued professional poker, making a fortune from the game.

With a net worth of roughly $60 million, Daniel Negreanu is the fifth-richest poker player. Negreanu was born in 1974 in the city of Toronto in Ontario, Canada, to Romanian immigrants. In his teenage years, Daniel Negreanu discovered his passion and talent in playing poker, prioritizing the game over his schoolwork. From then on, Negreanu improved his poker abilities, eventually becoming a professional player.

Phil Laak is the sixth-richest poker player, having a net worth of $35 million. Born in Ireland in 1972, Laak moved to the United States at a young age. Laak graduated from the University of Massachusetts with a degree in engineering and pursued work in the field until he focused on gambling for a living. Laak is talented in multiple gambling games, though poker proved to be his strong suit. In 2014, Phil Laak won his first World Series of Poker Tournament.

Born in 1993, Fedor Holz is one of the youngest poker players on this list, having a net worth of $35 million. Holz was born in Germany and developed his poker skills throughout his adolescence. In 2012, Fedor Holz entered his first live poker tournament and came away from the event successful, eventually dropping out of college in 2013 to pursue poker as a career. Holz went on to continue his success, amassing a net worth of $35 million.

Antonio Esfandiari is the eighth-richest poker player, having a net worth of an estimated $30 million. Esfandiari was born in Iran in 1978 but moved to California when he was still a child. Initially, Esfandiari worked as a professional magician. This line of work introduced him to poker, quickly developing his skill in the game. Not long after his introduction to poker, Esfandiari won his first World Series of Poker in 2004, making far more than he did throughout his magician years.

Jennifer Tilly is the ninth-richest poker player on the list and has a net worth of $30 million. Additionally, Tilly is currently the only woman poker player out of the top 10 richest poker players. Jennifer Tilly was born in 1958 in the United States. Tilly became a highly-successful actress, having featured in many movies and TV shows. Poker was not her focus until a close friend convinced her to try professional games. Tilly quickly demonstrated her natural poker talent, winning the World Series Ladies Poker Tournament just one year after she began high-stakes poker playing.

Born in 1980, Patrik Antonius is the tenth-richest poker player, having a net worth of $25 million. Born in Finland, Antonius was a model before he entered the world of professional poker. Antonius has made a name for himself due to multiple TV appearances on poker TV shows, as well as his exciting playing style. Antonius is the most successful Finnish poker player to date.

Who is the richest men’s poker player in the world?

The richest poker player in the world is Dan Bilzerian. Bilzerian has a net worth of an estimated $200 million, though his fortune was not made exclusively from playing poker. Dan Bilzerian is widely-known due to his branding and impressive social media presence, as well as investments. The poker star was born in Tampa, Florida, in 1980. Bilzerian originally started with money that his dad set aside in a trust fund. However, his poker winnings have netted him millions more.

Who is the richest women’s poker player in the world?

The richest women’s poker player in the world is Jennifer Tilly. Tilly has a net worth of roughly $30 million, making her the ninth-richest poker player overall. Born in 1958 in the United States, Tilly was a successful actress before moving into the world of professional poker. Just one year after Jennifer Tilly began playing high-stakes tournaments, she won the World Series Ladies Poker Tournament, an impressive feat.