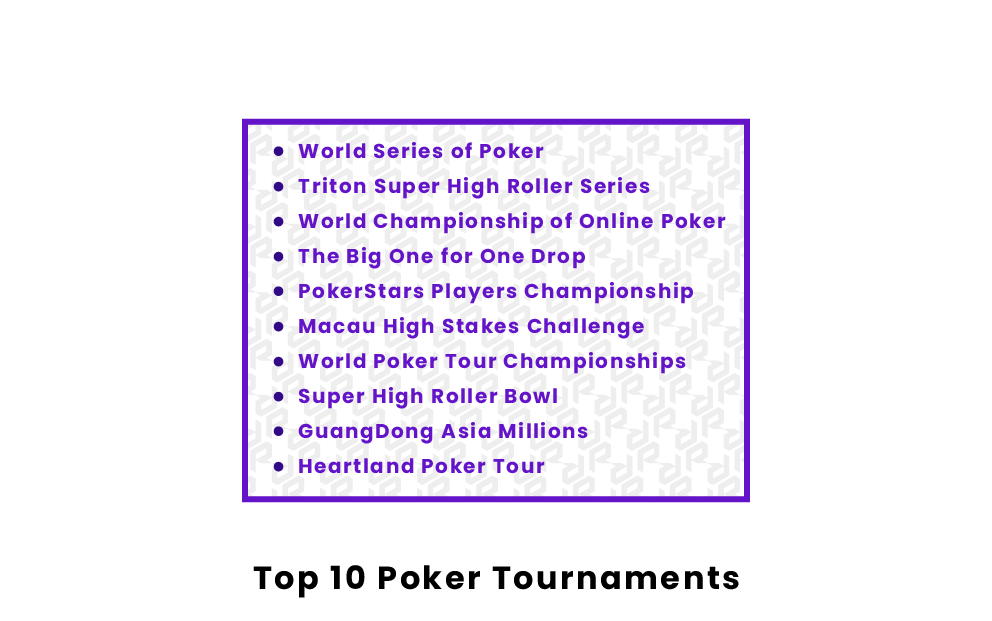 The world of poker is growing only more popular with each passing year. Professional poker players can be international celebrities, and the tournaments they take part in garner millions of views. The following 10 poker tournaments are considered the best in the world thanks to their large prize pots, large attendance, and their prestige.

What are the Biggest Poker Tournaments in the World?

In the world of professional poker, there’s nothing that can quite compare to the World Series of Poker (WSOP). The tournament series takes place over the course of the year, with millions of dollars given out to its most successful competitors. Some of the main events feature buy-ins up to $250,000 per person, such as their Super High Roller No-Limit Hold'em tournament, which took place in June of 2022. The winner of that tournament, Alex Foxen, took home just over $4.5 million for his efforts.

Similar to the World Series of Poker, the Triton Super High Roller Series is a promotion that hosts a handful of poker tournaments throughout the year. However, they’re only for poker players with the deepest pockets. The prizes given out at Triton Super High Roller events are regularly well over a million dollars. They also host their events at some of the most fascinating and exotic casinos, such as in Montenegro, Macau, and the Czech Republic.

When one thinks of the best poker tournaments in the world, it’s easy to conjure images of Monte Carlo, James Bond, and giant stacks of chips. But in the age of the Internet, this isn’t always the case. The World Championship of Online Poker takes place virtually but features the same eye-popping prize pots as other in-person tournaments. The series also hosts well over 100 events each year, which makes for plenty of opportunities to take home some serious cash.

4. The Big One for One Drop

One of the most prestigious tournaments that takes place every two years, The Big One for the One Drop is a poker tournament that takes place for a good cause. With a buy-in of $1 million for a seat at the table, part of the proceeds surrounding the tournament goes to One Drop, which is a charity organization that aims to improve the standard of living in underdeveloped countries. To get a seat at this tournament is highly difficult but enormously coveted.

PokerStars is one of the other big-name promoters in the world of professional poker, as they host numerous events over the course of the year that always make a splash within the community. The biggest splash, however, is their Caribbean Adventure No Limit Hold ‘Em Championship, which takes place in Nassau. It is essentially an annual celebration of poker and features tournaments with varying buy-ins, the highest being $100,000 for a seat at the Super High Roller tables.

Though not currently an ongoing tournament, the Macau High Stakes Challenge deserves a spot on this list, as it was a legendary moment in poker history. The 2012 Macau High Stakes Challenge took place over the course of a single day and featured a prize pot of $23.5 million, with the winner taking home a whopping $6.45 million. It was a tournament that further cemented Macau’s reputation in the gambling world and established it as a place where one-off tournaments such as this one can be enormously successful.

Not to be confused with the World Series of Poker, the World Poker Tour Championships is another series of tournaments that culminate in a few main events that each have legendary payouts. Each of the main events on the tour pays out nearly a million dollars, and with 10 events over the course of the year, there’s plenty of money to be made. The tour is also broadcasted on both TV and livestreams and has stayed popular since its founding in 2002.

The Super High Roller Bowl is easily one of the biggest poker tournaments of each year. The tournament takes place annually, and with competitors buying in for $300,000 each, the prize purse of the Super High Roller Bowl is consistently astronomical in size. In 2022, the top three finishers each came away with over a million dollars. The winner, Daniel Negreanu, took home $3.3 million for his strong efforts over the course of the three-day tournament.

As a collaboration with PokerStars, the GuangDong Asia Millions tournament saw one of the single largest prize purses awarded in 2013. Taking place in Macau, the tournament was made up of 51 of the world’s best poker players. The top six finishers each took home over a million dollars, and the winner, Niklas Heinecker, came away with $4.4 million all to himself. The tournament showed how collaboration between Asian poker brands and mainstream American promoters can make for enormously lucrative tournaments.

With a buy-in of only $1,650, the Heartland Poker Tour is a televised poker series that aims to relate to real people. In fact, the tour even has the slogan, “Real People, Unreal Money.” The tour features competitors that feel closer to regular people that a TV audience can better relate to, and for that reason, it’s one of the most famous poker tours in the world, despite having prize purses far lower than some other famous tournaments.

What is the biggest poker tournament in the world?

The biggest tournament in the entire world is the World Series of Poker Main Event. The tournament is the culmination of an entire year’s worth of play on the World Series of Poker tour, which features events around the world. The Main Event, however, features only the very best players from the tour, some of the most famous names in the entire world of poker. As such, the event features prize pots that are simply astounding sums of money.