What is a poker league?

A poker league is typically free poker games held and run by a company at different venues across the country. Most of the time these leagues and games are held at local bars in different areas across the country. These games held in the bars are strictly not for money, but the biggest winners in these leagues will then typically be invited to the league's main tournament. This main tournament is for some type of cash prize or reward that the top players in the league who were invited get to compete for. Poker leagues are based on the idea of poker becoming a social event rather than the typical idea of it being strictly for gambling. Bars host these games to attract more people and make more profit off people buying drinks or food while they are there. The poker game that is most typically played is no limits Texas Hold-em done in a tournament style that goes until one person is left. However, poker leagues can also be amateur in which the games can be for money and held in a person's home with a smaller number of people. Additionally, there are professional leagues/tournaments which cost lots of money to play in, but also have huge money prizes. 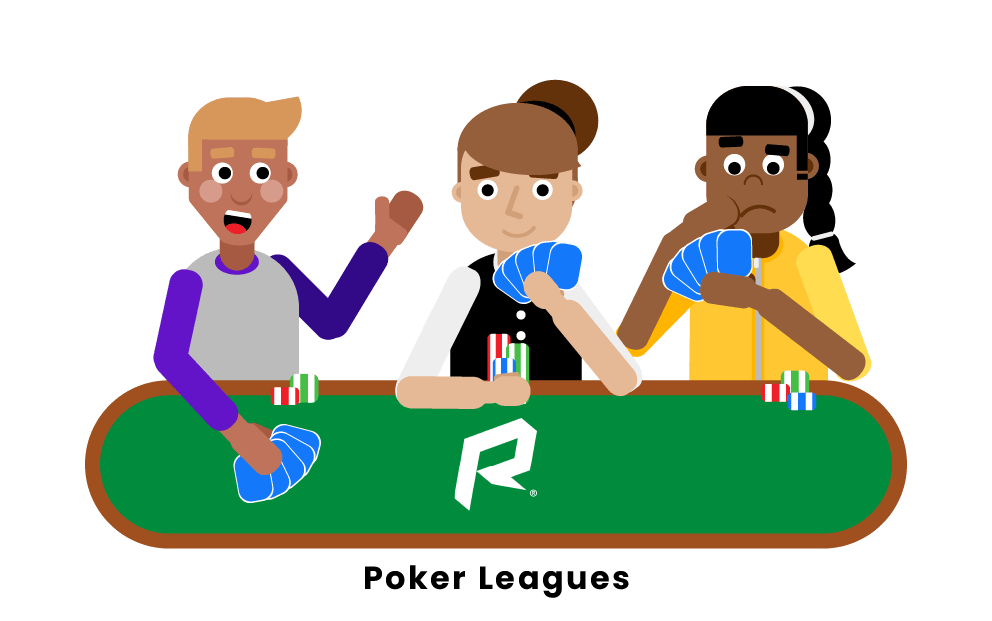 What is the most popular league in poker?

The most popular league in poker is the World Tavern Poker League which is a poker league that runs through local bars across the country that choose to participate in the league. The World Tavern Poker League plays no limits Texas Holdem until one person is left standing. The top twenty people in the game at the bar then get points based upon where they finish in the top twenty with bonus points being given to the final 8 players. These points then go towards your ranking in four different categories: tavern ranking, regional ranking, state ranking, and national ranking. The season itself lasts 26 weeks in total from February to August and then a new season starts again in August covering all 52 weeks in a year. The regular season is 24 weeks and then the tavern/bar championships are held during the last two weeks. The main championships nationally are held during the 13th week of the season and at the end of the season.

How do you start a poker league?

To start a poker league the first thing you need is a venue to play at which can be anything from a house to a bar with some type of table to play on. Then you need to establish if the league is for money, strictly a social event, or a league where people compete to gain some type of points for an eventual reward at the end of the season. After this you need to make sure you have a sufficient amount of chips of good quality for people to play with and enough playing cards that play doesn't have to stop for shuffling. The game that should always be played is Texas Holdem as it is the most common and played type of poker professionally and amateur, and is good for large games or small. Besides these things not much else is needed to start a league as long as your aim isn't to create a national poker league as that requires different standards and rules.

How long is a poker league season?

Poker leagues that are on the country wide level have a more organized and official season structure. Typically these leagues seasons are about 6 months long, with championships being played sometime during or after a season. Each new season also typically starts right after the old one ends, with roughly a week in between each season. However, depending on the level of organization some more amateur leagues can go for a longer period of time or shorter depending on the league. Most amateur/local leagues also have seasons that are multiple months in length. Furthermore, breaks between seasons may be longer also for the more amateur/local leagues.

How much does it cost to join a poker league?

The cost of a poker league can vary from league to league, but country wide leagues are always free and never for money, while more local/amateur leagues usually cost money to play in. Costs for the local leagues also can vary as some may have a cost for a season at 50 dollars/euros and others may cost money every time you go to play which also varies in price. However, country wide/more official leagues are always free as required by law. The only league that is guaranteed to cost money is professional poker leagues which have large buy ins in the thousands of dollars.

What are some top professional poker leagues?

Professional poker leagues are typically more often tournament structure where players compete for very large money prizes but also comes with a large buy in at the beginning of the tournament. The top league/tournament for poker is the World Series of Poker (WSOP) held in Las Vegas, Nevada every year with prizes at the final table being in the millions of dollars. There is also the World Poker Tour, World Series of Poker Circuit, Card Player Poker Tour, and many others. These professional tournaments are played across the world during all months of the year. However, the top tournament/league in the world is the WSOP, as it has been done for 50 years now and is the most famous and nameable of all the leagues and tournaments professionally with the largest cash prizes too. The 2019 tournament's prize pool was 80.5 million with the winner going home with 10 million in cash and the WSOP champion bracelet. The top player in the history of the WSOP is Phil Hellmuth who has one the tournament 15 times.

How Do You Play Poker As A Beginner?How Do You Split The Pot In A Poker Game?How Do You Win When Playing Poker?
Poker 101Learn PokerHistory Of Poker
PreviousNext