SportsSporting EventsGamesActivitiesPokerHistory Of PokerHow Long Is A Poker Game?Learn PokerPoker 101Poker BasicsTop 10 Poker BooksTop 10 Poker Video GamesTop 5 Poker BrandsTop 5 Poker MoviesTop 6 Richest Poker PlayersWhat Are Some Of The Best Books On Poker?What is Poker?Playing PokerA Guide To The Types Of Poker Chips And How To Use ThemHow Do You Play Basic Poker For Beginners?How Do You Play Poker As A Beginner?How Do You Split The Pot In A Poker Game?How Long Is A Poker Tournament?How Much Does A Poker Coach Cost?List Of Poker TipsList of Poker SkillsList of Poker StatisticsPoker LeaguesWhat Are Some Confusing Terms And Lingo In Poker?What Are The Types Of Poker Games You Can Play?What Do You Need To Play A Poker Game?What Does A Dealer Do In A Poker Game?What Is A Poker Stable?What Is A Ring Game In Poker?Where Should You Sit At A Poker Table?Poker HandsPoker PlayersPoker Rules
Home>Sports>Poker>Playing Poker
PreviousNext

How Do You Split The Pot In A Poker Game? 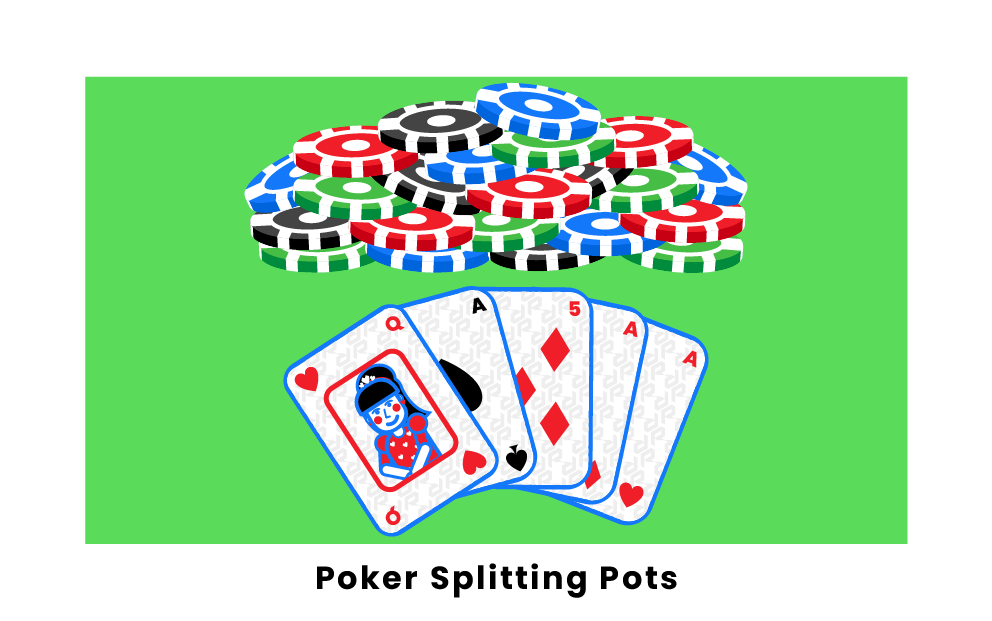 While there is typically only one winner in any given hand of poker, the pot is sometimes split between more than one player. It is crucial to understand this part of the game of poker, especially when playing for money. Read on to learn about how to split the pot in a poker game.

What Is Splitting Pots?

When players have the same five-card hand, or during games like high-low where certain hands can take parts of the pot, the pot has to be split.

Splitting divides the pot into halves, or even smaller parts, so different players can share the winnings evenly. At casinos, dealers do this for you, but you’ll need to manage the pots, the math, and the winnings yourself at home games.

When to Split Pots

Pots get split in a variety of situations:

How to Split Pots

On the surface, splitting pots is easy enough: take the pot, split it evenly, and each player takes their winnings.

This is especially easy when two players have the same five-card hand: each takes half. If it’s three or four or more players, all with the same hand, divide the pot by the number of players, and each player collects their winnings.

However, things can get tricky fast.

In high-low poker variants, the players with the highest and lowest hands each win half of the pot. The easiest split pot in high-low games is when one player wins the high pot, and the other wins the low pot, as the total pot is simply split in half. If a single player has both the high and low hands, they win the entire pot.

In games like Omaha High-Low, where it is common for several players to have identical winning low or high hands, the pot needs to be split along more complicated lines. This is because a different number of winners may be declared for the high and low pots. In all cases, the total pot is divided evenly in half, with all high pot winners taking an equal share of their half and all low pot winners taking their equal share. For example, three players have the identical winning high hand, while only one (other) player has the winning low hand. In this case, the players with the high hands each win one-sixth of the pot, and the player with the winning low hand wins half of the pot.

The most common instance of high-low split pots is quartering: two players have the same low hand, but one has a better high hand. So they split the low, and one player takes the high, so one player gets 75% of the whole pot and the other gets 25%, a quarter. But it’s not uncommon for three or more players to play for the same high or low, so players might get one-sixth or one-eighth or an even smaller fraction of the pot, while one player ends up taking two-thirds of five-eighths for themselves.

When one player is all in, they can win the main pot: the pot that every active player can theoretically win. But other players can continue betting amongst each other by placing their chips into a side pot: a pot that only some active players can win. Sometimes the side pots can get even bigger than the main one!

On the surface, side pots are relatively simple: the main pot usually gets stacked near the player who is all in, and the other two players can bet into the side pot. But, when multiple players are all-in, there might be more than one side pot: for instance, a player is blinded all in, another player goes all-in on the flop, and other players continue betting through the river and turn.

Imagine what can happen if there are three or four or more players all in at the same time, with side pots stacked all around the table, while two big stacks keep betting into one another, complicated enough at a Texas Hold’Em table, and even more so at a High-Low game, where all those pots could get split up even more!

In these cases, the key is remembering who can win each pot. At casinos, this is simple enough, since the dealer sorts out each pot. But at home games, it’s crucial to remember who can win each pot: every player can win the main pot, including the player who went all in first; then the next side pot can be won by everyone who could match the next all-in bet; and so on. If it sounds complicated, don’t be afraid to take extra steps to sort it out. Make sure to separate the side pots into their own piles of chips. If you play a lot of Omaha High-Low, you might consider keeping a pad and paper at the table!

Inevitably, there will be a pot that can’t be split evenly: a 5-cent chip that can’t be broken down, or an even number of players will try to split a pot with an odd number of chips in it.

In these cases, it’s always useful to be able to make change: break down one of the chips into smaller denominations so that the chips can be divvied out as evenly as possible. At casinos, the dealer will handle this. At home games, players can work it out with one another by making change with one another or with the bank.

But what to do with an extra chip that can’t be divided evenly? Different games have different rules. Some leave it in the pot for the next hand, some give it to the player closest to the big blind. Others pick a high card, others let the dealer take it. Always know the rules of the home game you’re playing in.

How can you tell if a pot is split in poker?

You can tell if a pot is split if the dealer begins dividing up the pot into equal amounts as opposed to handing one player all of the winnings. This happens when two or more players have the same best hand. When playing at home, the players must figure out amongst themselves how to split the pot.

When do you split the pot in poker?

What is a chop pot in poker?

In poker, a chop pot is a term used to describe when two or more players split the winnings on any given hand. This term is essentially the same as a split pot and the same scenarios that apply to a split pot in poker apply to a chop pot.

Pages Related to How Do You Split The Pot In A Poker Game?