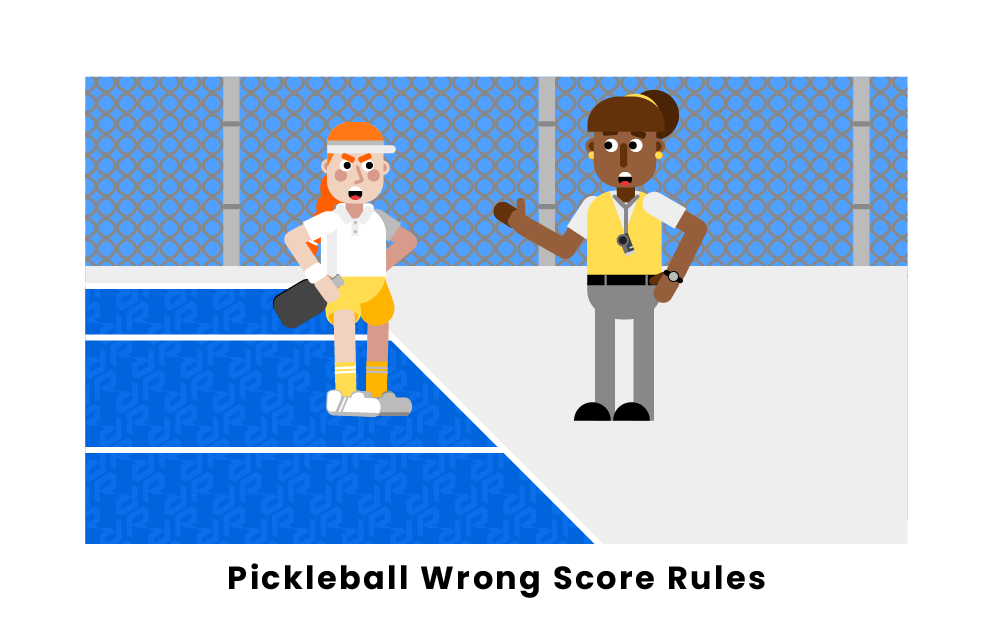 Due to the rapid nature of play and the natural human ability to make mistakes, many people who play pickleball may wonder what to do if a player or referee accidentally calls the wrong score. Natural instinct might suggest that the score should be corrected immediately, even if play has begun, but the Rules of Pickleball actually lay out a strict procedure for fixing an incorrect score, and here, we will take a look at what to do in the event that such a mistake occurs.

What Are the Rules for Wrong Scores in Pickleball?

As with any sport, pickleball is always subject to human error, and both referees and players can occasionally make mistakes when calling out the score of a pickleball game. In response to this possibility, Rule 4 of the Rules of Pickleball contains a subsection detailing the procedure for responding to an incorrect score. The rule states that two things must happen if the server or the referee calls an incorrect score. Firstly, if the serve is made and returned, play must continue until the rally is finished, with one team either scoring a point or committing a foul. After the rally ends, any player has the right to call for a correction to be made to the score, but this must be done prior to the next serve. The rules also allow for players to call for a score correction immediately before the initial serve is returned, in which case the score will be corrected and the serve replayed without penalty.

In pickleball, if a player calls for a score correction prior to returning the serve, but the score was determined to actually be correct, that player will receive a fault, and their side will lose the rally. A player will also be faulted if they call for play to stop after the initial serve has been returned on account of an incorrect score.

How to Correct a Wrong Score in Pickleball

With these rules in mind, addressing an incorrect score in pickleball is relatively simple. If a player or referee notices that someone has called out the score incorrectly prior to the beginning of a rally, they can proceed in one of two ways. Firstly, they can call for a score correction immediately, so long as the non-serving team has not yet returned the initial serve. After which, the correct score will be determined, and play can either resume without penalty or with a fault awarded if the challenging player was wrong about the incorrect score.

The second option that can be pursued after an incorrect score is for the referee or player to allow the rally to play out until one team scores a point or commits a fault. Once the rally is completed, the player or referee who noticed the incorrect score can then call for a correction. Correcting wrong scores tends to be more prevalent in pickleball tournaments, as friendly games are often not taken as seriously. Either way, pickleball players can and should be aware of how to address an incorrect score properly.

Pickleball is a common and fun activity for thousands of people worldwide, but as with any sport, it can always be subject to errors. Thankfully, the Rules of Pickleball provide a quick and easy solution to the calling of incorrect scores, allowing the game to move quickly and remain fun for all involved.