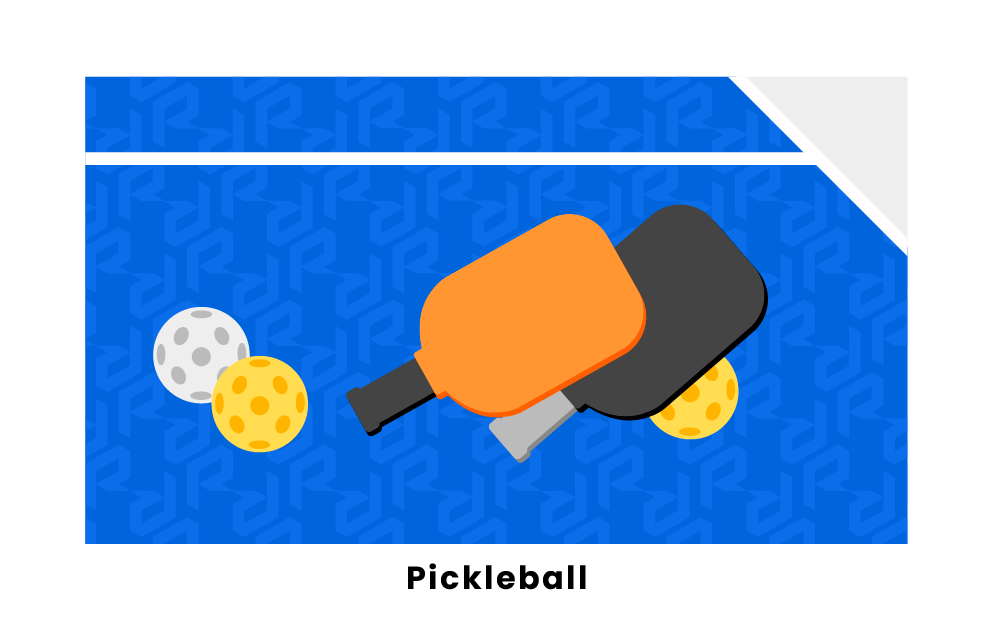 Pickleball was invented by Joel Pritchard, Bill Bell, and Barney McCallum on Bainbridge Island, Washington in the summer of 1965. The game was created to keep the children of Pritchard, Bell, and McCallum occupied, but soon became a popular activity for both children and adults alike.

Pickleball was brought to mainland Seattle and began to spread across the country. Press coverage from New York, Joel Pritchard’s run for Congress, and involvement with schools helped grow the sport immensely. 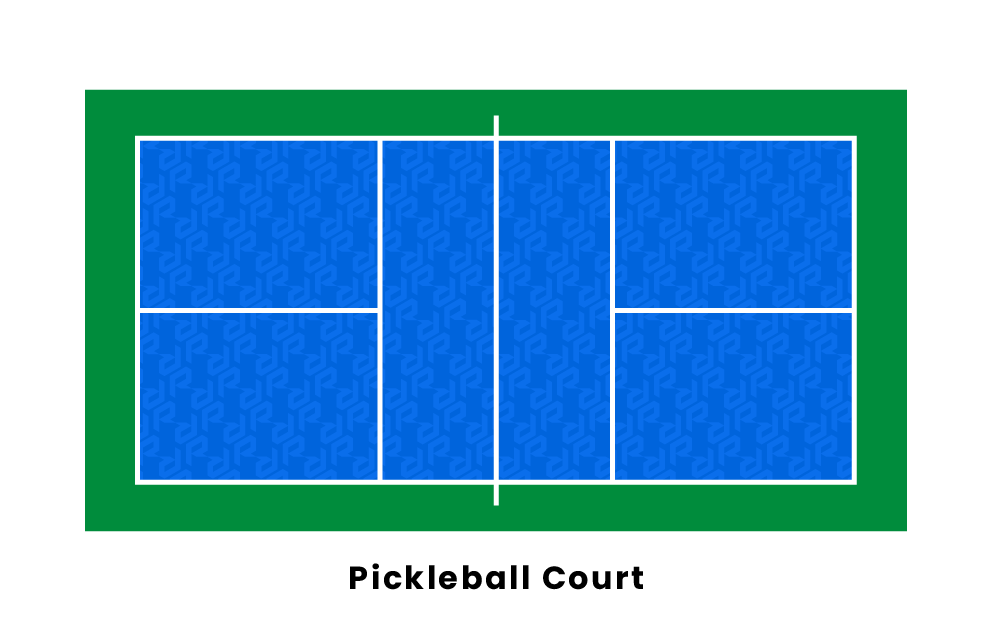 Pickleball can be played on a variety of surfaces. It is common for pickleball games to be set up on existing badminton, basketball, or tennis courts. These are made from some type of concrete or hardwood. Early on, pickleball was also played in common city streets.

For more official courts, the USA Pickleball Association reccomends using an Acrylotex-PB coating over concrete or asphalt to make courts. 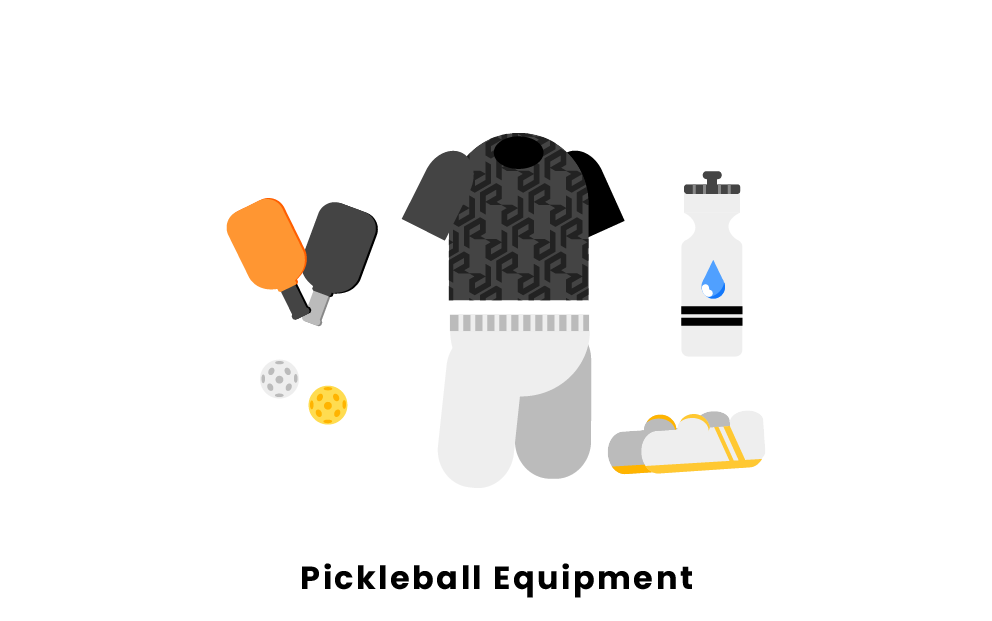 The amount of equipment that is required to play pickleball is relatively low. At bare minimum, players need a playing court, net, pickleballs, and pickleball paddles to start a game.

Pickleballs are small plastic balls with holes, similar to wiffle balls. Pickleball paddles were originally made from wood, but are now available in a variety of materials.

Players may also need adequate clothing to compete: proper shoes, shorts, or sweatbands are recommended. Some pickleball games may require players to wear uniforms, although this is fairly uncommon. 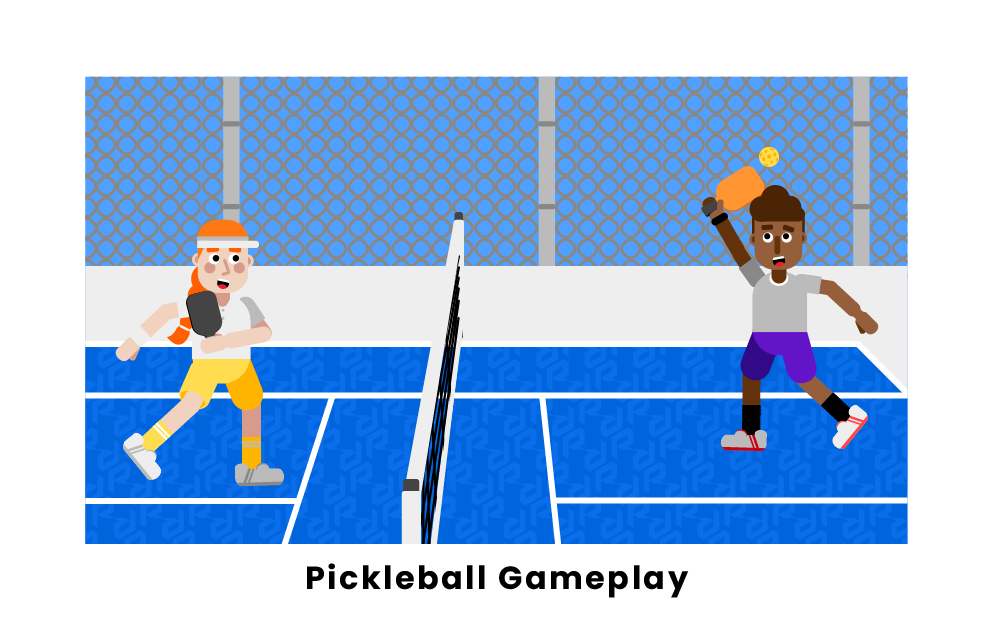 Pickleball is played by two or four players, including two pairs or individuals competing against each other from either side of a centered net. These players hit the ball back and forth in a rally until one side commits a fault.

Each rally begins with a serve. The server must hit the ball over the net into the service area diagonal from them.

When a fault is committed by the non-serving team, the serving team receives a point. If the serving team commits a fault, they pass the serve to their other partner or the opposing team (this is called a side out). The game is won when one team earns 11 points.

Doubles pickleball games do not have defined positions for each player, but a smart pair might maximize their strengths by having each player play on a certain side of the court.

The only distinguishing characteristic between teammates is which player is serving.

Service rotates when the serving team commits a fault. A side out occurs once both teammates have already served and the serving side commits a fault (exception: to begin the game, only one player gets to serve before a side out). 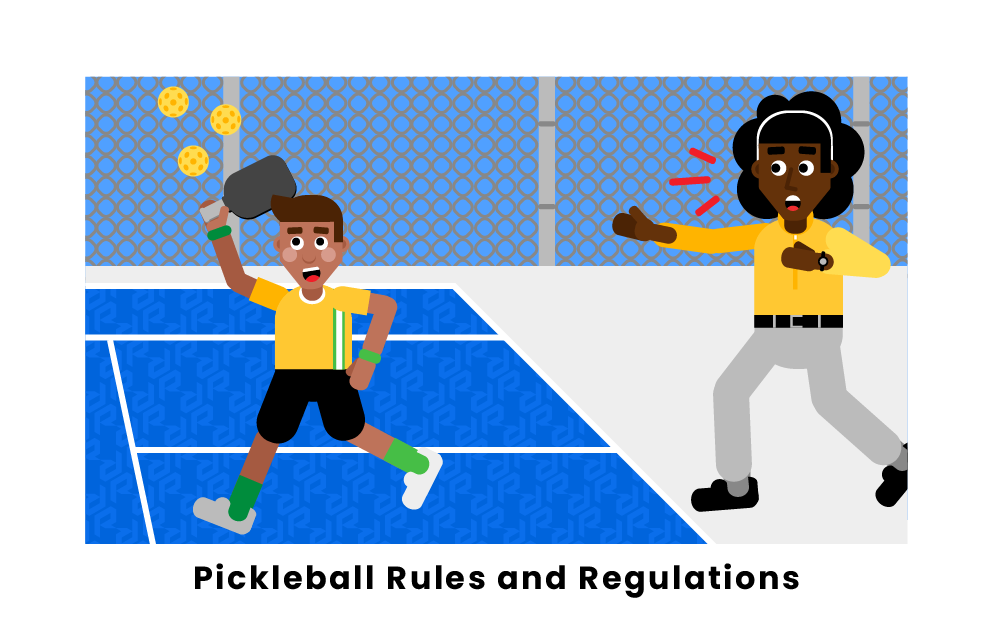 The rules of pickleball are expressed through faults, or things a player is not supposed to do.

Some faults are specific to serving, while others apply to both serving and rallying.

Common faults include volleying from the No-Volley Zone, hitting the ball out of bounds, or failing to hit the ball back before it bounces twice. 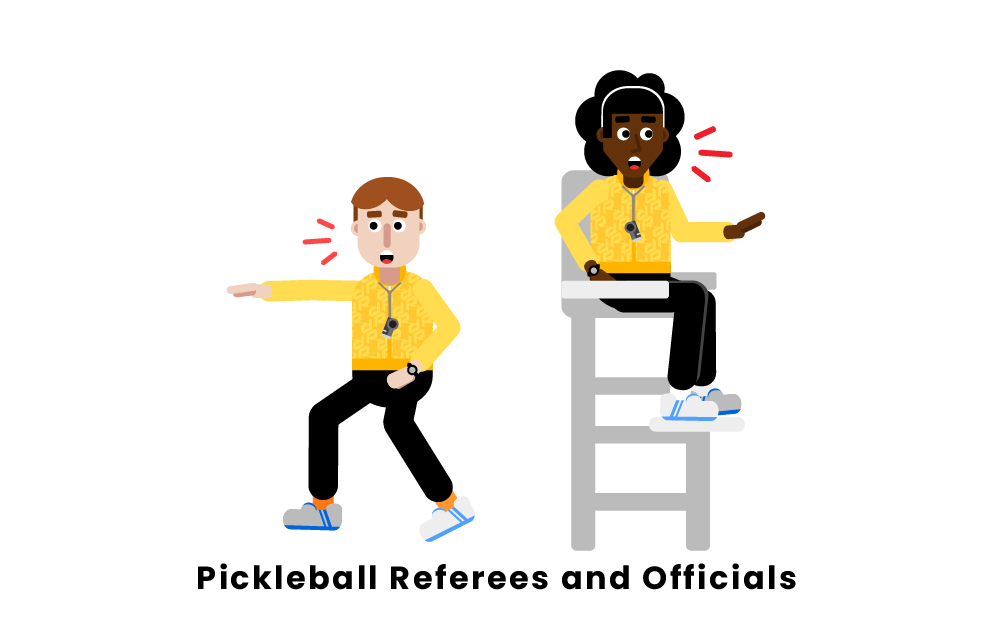 Traditionally, pickleball is played under minimal supervision, it is up to the players to be cordial and keep the game running smoothly. In today’s official pickleball competitions, however, referees will be used to maintain the rules. Official pickleball referee certifications are given by the USAPA after completing certain refereeing courses.

The referee’s main job is to keep score, track the service order, and identify faults.

Pickleball players will use certain words specific to the game itself.

Some, like the “kitchen,” refer to places on the court (the kitchen is another word for the no-volley zone). Others refer to types of pickleball shots or strategies. Some of these will be discussed below: 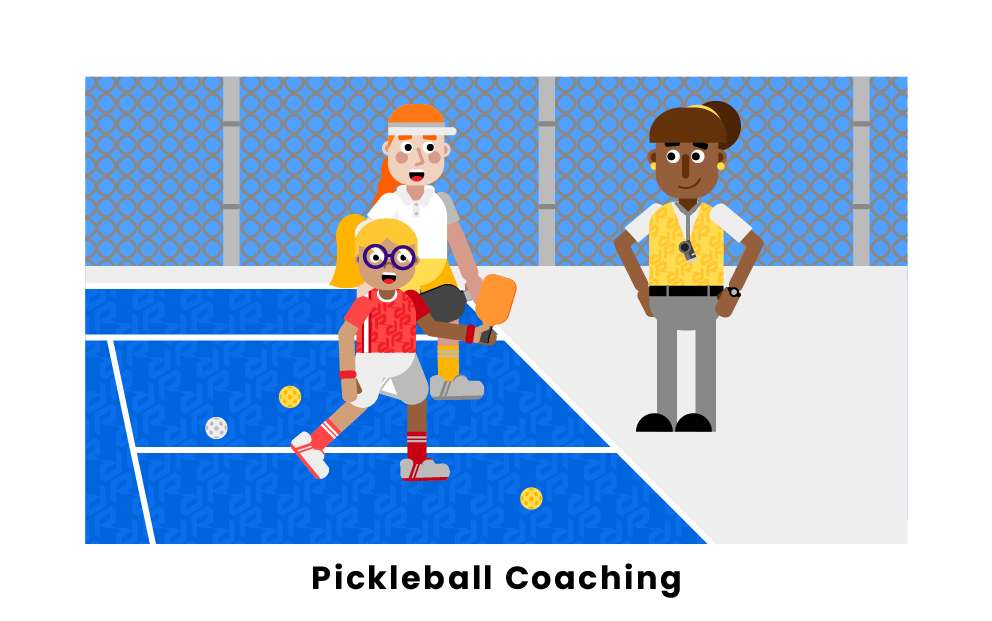 Pickleball coaches are responsible for keeping a team competing at their highest level.

Pickleball coaches are experienced former players who have a passion for the game beyond a general appreciation. These individuals want to grow the game by fostering even more excitement for and participation in pickleball.

The skills and techniques required for pickleball are similar to those in tennis, but unique in that they are done on a smaller court with a different paddle.

Agility and quickness are important pickleball skills because players must be able to get to the ball as quickly as possible.

The most important skill to master in pickleball, though, is hitting the ball. There are countless different types of shots that a player can add to their arsenal, and the biggest difference in player skill is seen in what players are able to do with their shots.

One of the main hitting skills is simply aiming. Targeting certain players or areas of the court is key to forcing faults. Turning one’s wrist when hitting the ball can give it a different speed and direction to confuse the opponent.

Pickleball strategies vary depending on the number of participants.

In singles pickleball (1v1), it is generally more advantageous to aim for the corners of the court so that the opponent exhausts more energy running back and forth.

In doubles, there exists a “sweet spot” in between the two players that players should aim for. This general strategy is designed to make returns difficult for the opponents; they must communicate and act quickly to avoid a fault.

Another common doubles strategy is player alignment before the serve. For example, if an opponent consistently returns the ball to one spot, it may be more advantageous to move one teammate out of their regular position. 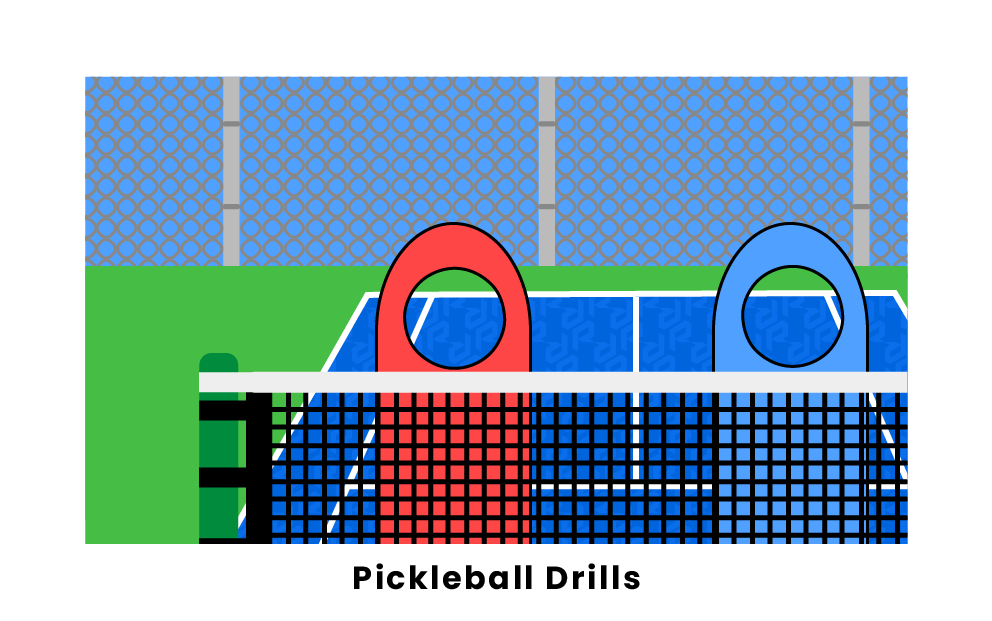 Pickleball players may use drills to improve their game outside of the competition itself. Constant repetition and practice are how the best players become the best.

One common pickleball drill is a wall drill. This drill can be done with one or multiple participants. Essentially, the player(s) hits the ball against the wall. This is similar to playing on a court, except you do not need to wait for the opponent’s return. There are a variety of wall drills that can be practiced, depending on what type of shot needs work. The decreased return time means more reps, allowing players to focus on their technique and practice it over and over.

Another category of drills is one-on-one practice. Similar to wall drills, one-on-one drills take place on an empty court so that players can become more accustomed to the area they’ll be dealing with in-game. Like wall drills, players hit the ball back and forth in whatever manner will help them improve.

The biggest brands in pickleball are manufacturers of pickleball equipment. These brands use athlete endorsements, event sponsorships, and constantly-improving technology to grow their businesses. One of these, Pickle-Ball Inc., was created by Barney McCallum, one of the inventors of pickleball itself.

Because of pickleball’s relative newness in the sports landscape, there are very few nationally significant youth organizations. As the official pickleball association in the US, the USAPA does offer youth tournaments and clinics across the country. However, there are lots of local clubs and organizations that sponsor pickleball all over the United States. Check your local youth group or athletic organization to see if they hold pickleball events!

There are few well-known pickleball coaches compared to other sports. Much of this is because coaches are less important in pickleball than in other sports. A pickleball pair could realistically operate on their own if they had to, but the more common role of a pickleball coach in the youth setting is to control a group of players and get them familiar with the basics of the sport.

Many pickleball “coaches” make and sell instructional videos to help people improve their game at home.

Prem Carnot: The “Pickleball Guru” and author of Smart Pickleball 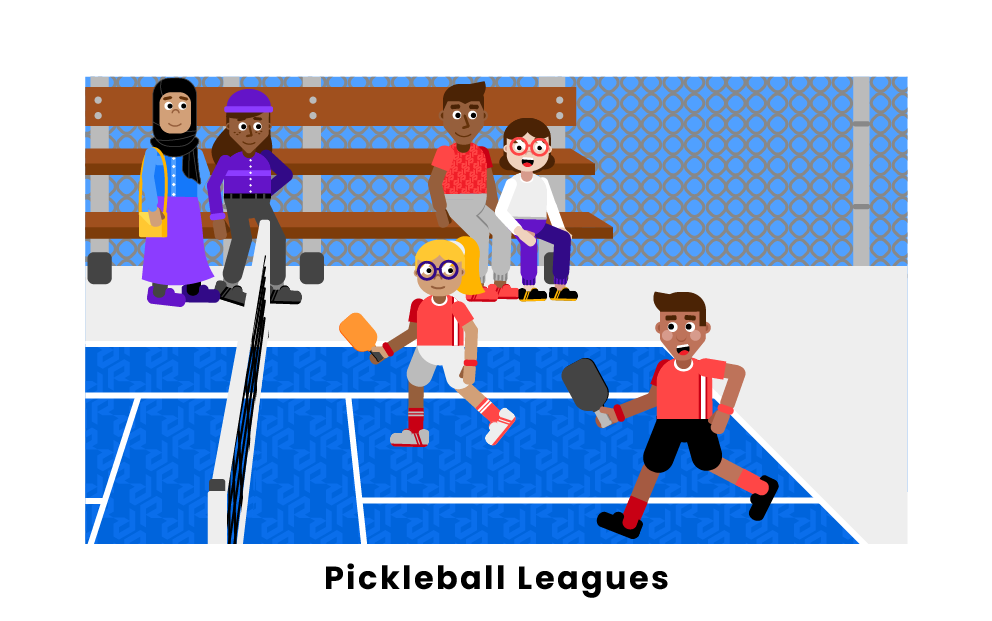 Pickleball does not have traditional professional leagues like other sports. Instead, pickleball players compete in events and tournaments throughout each year to earn money.

The closest thing professional pickleball has to a “league” is the Pro Pickleball Association, which is a collection of tournaments that go on throughout the year.

There are plenty of pickleball leagues at the amateur level, including USAPA-sponsored ladders that allow players to be competitive.

Pickleball does not consist of teams in the same way some traditional sports do.

In some competitions, such as the Pro Pickleball Association’s Pro Player’s Cup, professional players are sorted into teams. The players still compete in singles or pairs before their scores are added together.

Pickleball events are key to developing interest in the sport. These events range in scale; some are part of larger local “games” (collections of sports), some are small club events that are open to the public, and some are elite tournaments to showcase the game’s best.

Many pickleball events are also tournaments. As there are no one-off games at the professional level, these large events will usually occur over the course of a few days. 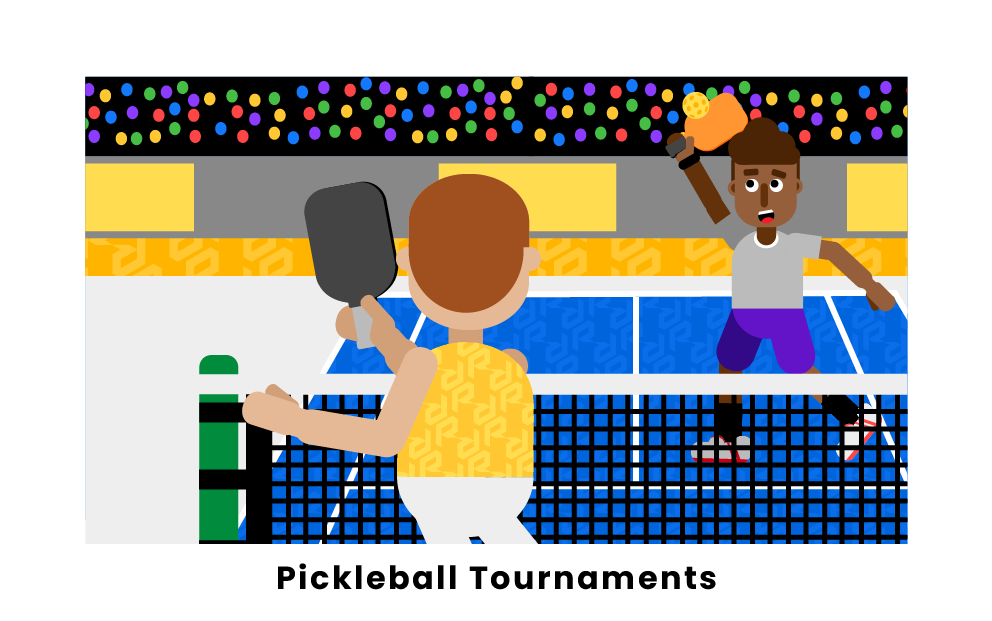 There are thousands of pickleball tournaments all over the world. Like other events, some of these tournaments are private or small in size, while others gather thousands of people and dish out significant amounts of dollars in prize money. 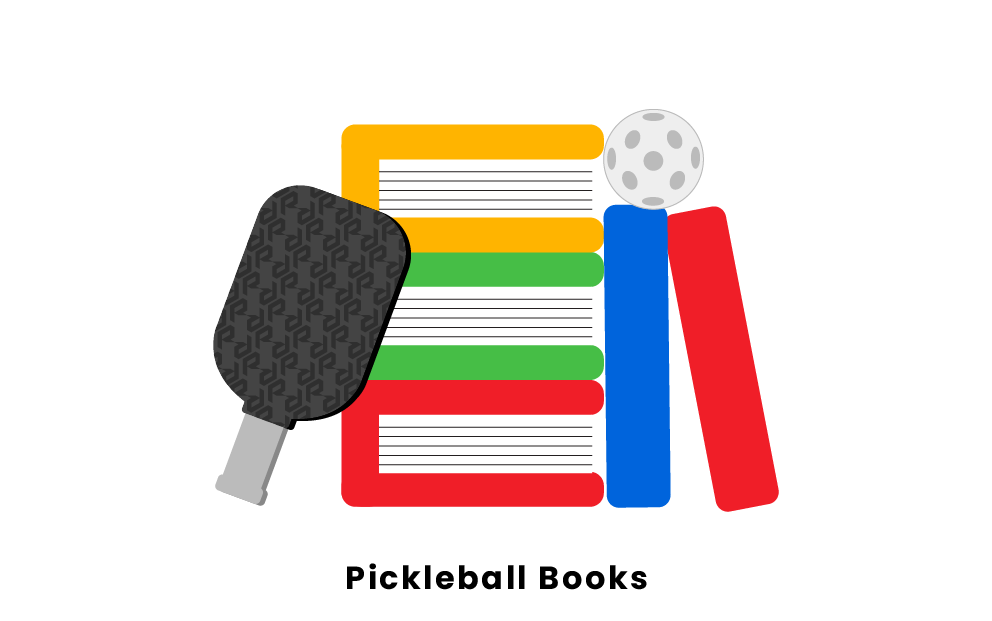 When not on the court, pickleball players can improve their mental game by understanding the history, strategies, and proper mindset for succeeding at higher levels of pickleball. Most pickleball books focus on one or more of these aspects.

Here are some of the top pickleball titles out there: 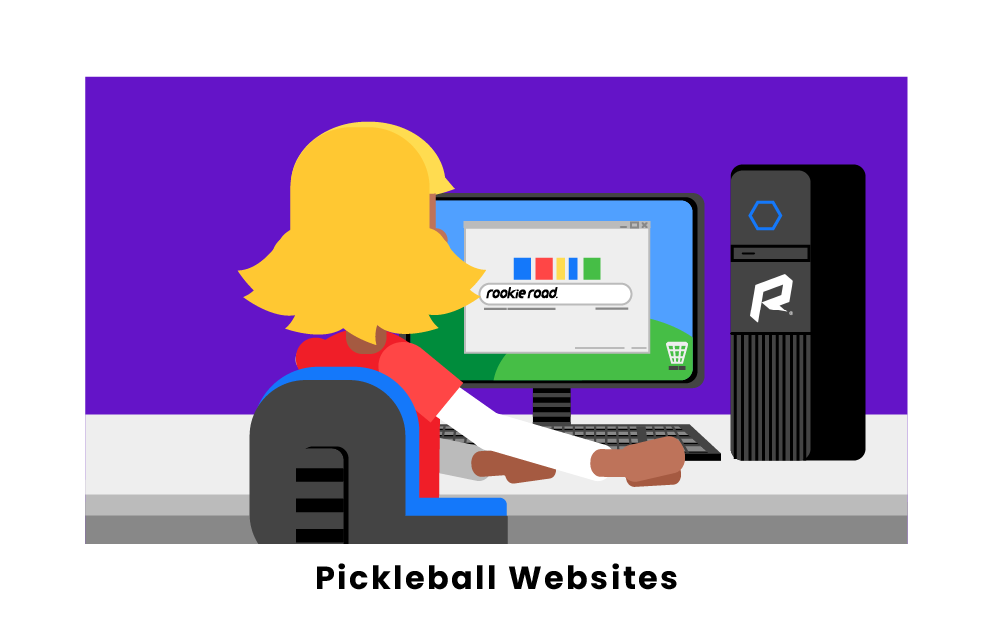 There are many pickleball-centric websites, but some have different functions than others. There are separate pickleball websites devoted to pickleball organizations, events, equipment manufacturers, and spreading the game. Some have multipurpose functions.

Pickleball is a racket sport that is a combination of badminton and tennis.

What are 5 rules of pickleball?

Why Pickleball is called pickleball?

The real reason for the name of “pickleball” was because Joel Pritchard’s wife Joan remarked that the game resembled a “pickle crew” in a boat.

Where is pickleball most popular?

Pickleball is most popular in the United States, and is played by players of all ages.

Is Pickleball easier than tennis?

Pickleball is considered to be easier than tennis. Pickleball players pride the game for being accessible to many players.

Pages Related to What is Pickleball?