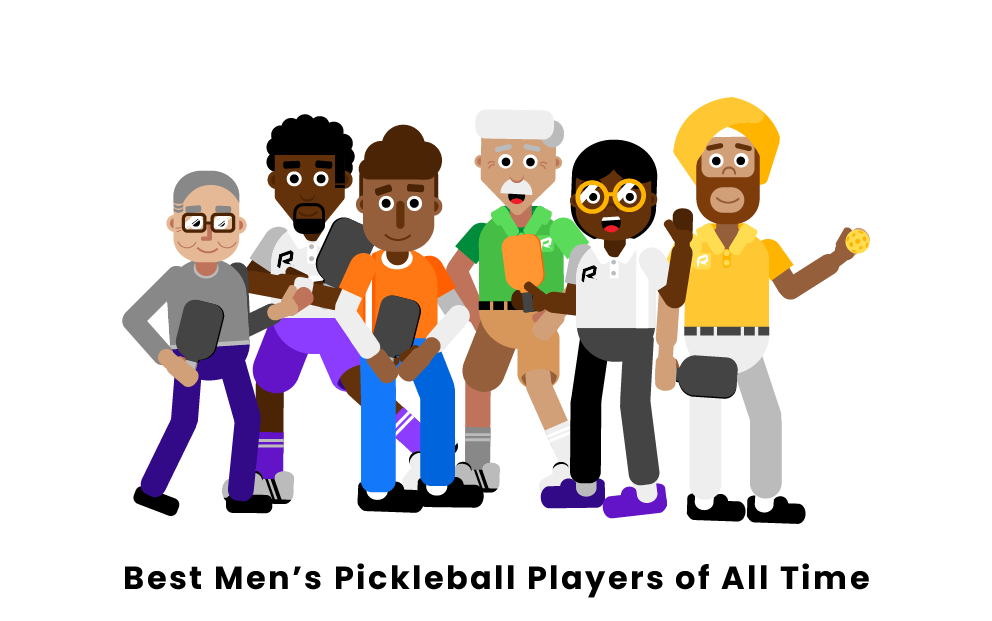 Pickleball is one of the fastest-growing sports in the U.S. As the sport continues to grow, some players have emerged as the best in the world. These players have managed to turn their passion for pickleball into full-time careers as they play tournaments nationwide and work to spread enthusiasm for pickleball and teach future pickleball stars of all levels.

Who are the best men’s pickleball players of all time?

Benjamin ‘Ben’ Johns grew up in Maryland and has a background in table tennis and tennis. He began playing pickleball in 2016 and quickly became one of the biggest names in pickleball. Johns is ranked number one globally in men’s doubles, men’s singles, and mixed doubles, and has well over twenty gold medals. Johns was the first professional male pickleball player to Triple Crown, and he currently holds more than any male pro in history. He was the first pro pickleball player to get an endorsement deal, proving that pickleball is rising in popularity. Johns also has a total of forty PPA titles and frequently partners with his brother, Colin Johns, for men’s doubles matches.

Tyson McGuffin grew up in Washington and has a background in tennis. He began playing pickleball in 2015 and won his first tournament after only playing for about a month. McGuffin won his first championship in 2017 at the U.S.A. Pickleball Association National Championships in the men’s singles division. He developed a rivalry with Ben Johns during Johns’ meteoric rise to the top, and McGuffin and his frequent doubles partner Riley Newman often have close matches with Ben and Collin Johns, who are currently the number one ranked men’s doubles team. McGuffin spends much of his free time coaching through his camps, podcast, and personal coaching.

Jocelyn ‘Jay’ Devilliers grew up in France with a background in many sports, including tennis, table tennis, badminton, squash, and handball. Devilliers began playing pickleball in 2019 after a severe injury damaged his tennis career, and he quickly became one of the best in the sport. He is currently among the top five best pickleball players globally and excels in all three divisions the sport has to offer. Devilliers is an ambassador with the French Pickleball Federation in hopes of spreading education and enthusiasm about pickleball to France. He travels year-round to compete, educate, and train in an effort to enhance his own skills and grow an appreciation for the sport everywhere.

Zane Navratil grew up in Wisconsin, and though he started playing pickleball in 2013, he did not turn pro until 2020, in the middle of the Coronavirus pandemic. Navratil played Division III Tennis at the University of Wisconsin-Whitewater and achieved Academic All-American status while earning his Masters Degree in Accounting. However, he soon left it all behind to pursue his passion and play and teach pickleball full-time. Navratil is highly decorated, having won over twenty medals in 2021 alone, and he is ranked number two globally in men’s singles. In his free time, Navratil travels the country teaching pickleball clinics, and he is known for his methodical teaching style.

Frank ‘FAD’ Anthony Davis grew up in Southern New Jersey and, unlike most professional pickleball players, had never played a racket sport until he started playing pickleball in 2013. Now, he holds a Triple Crown and is a two-time APP (Association of Pickleball Professionals) World Pickleball Open Champion. He ended 2019 ranked number three globally and is currently ranked number six globally. Davis also co-founded PickleballByPros.com, a website that provides accessible training content for players of all levels. Additionally, he partners with local organizations to provide special exhibitions for events, such as the Pickleball Against Poverty Tournament.

Kyle Yates grew up in Florida and played tennis until he transitioned to pickleball in high school. Yates took gold on the first day of the USAPA National Tournament, his first major tournament, in 2014 in the nineteen-plus category. He knew pickleball was his passion, so he suspended his education at the University of Florida and pursued pickleball full-time. His history with the sport allowed him to rise through the ranks quickly, and he has since earned six U.S. Open gold medals, four USAPA Nationals gold medals, and fifteen total USAPA Nationals medals. In 2018 he was ranked number one globally in the men’s doubles division and was once partnered with Ben Johns.

Who is the best men’s pickleball player of all time?

What men’s pickleball player has won the most PPA titles of all time?

Benjamin ‘Ben’ Johns has won the most PPA (Pro Pickleball Association) titles of all time so far. He currently holds a total of forty PPA titles that he has earned since he turned pro in 2016, and that number is likely to grow as he continues to compete. His many titles have earned him the title of GOAT (Greatest of All Time) and contributed to him currently being ranked the number one men’s pickleball player globally.

What men’s pickleball player has won the most prize money of all time?

Benjamin ‘Ben’ Johns has won the most prize money of all time, with his total prize money from his many PPA wins alone totaling at an estimated $146,325. Combined with his many other tournament winnings, the number is likely much higher than that. This also does not include money from sponsorships, coaching, or other pickleball-related business ventures he may have. In fact, many professional pickleball players rely on sponsorships, coaching, and other side ventures to supplement their prize winnings, as they are fairly small considering pickleball is still an emerging sport.