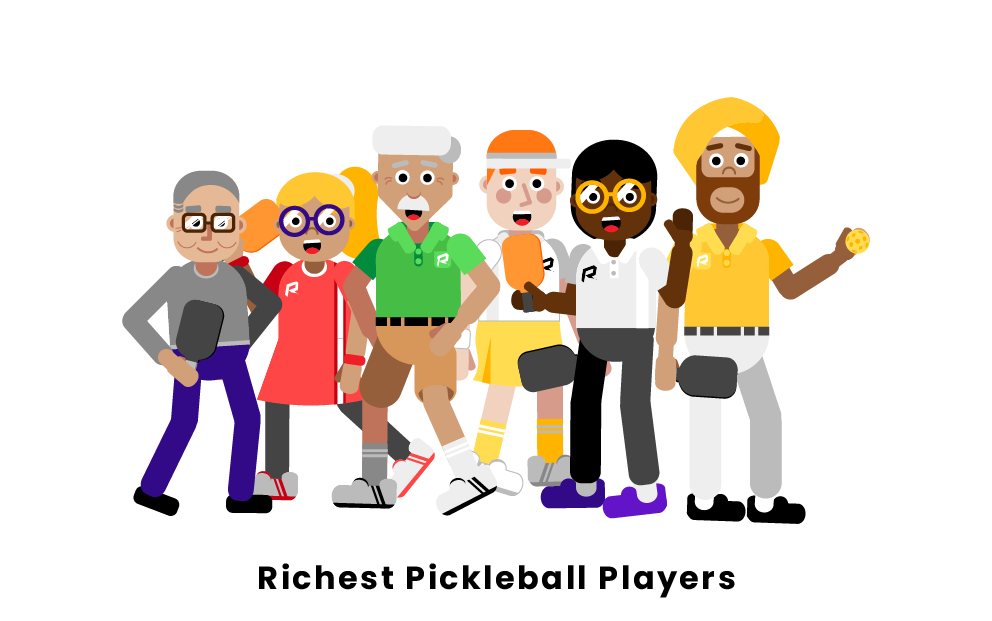 Pickleball has long been considered a game to be played by retirees; however, more young athletes are beginning to play pickleball and have turned it into one of the fastest-growing sports in the U.S. As the sport grows, athletes who play professionally are able to make a living off the sport through a combination of tournament prize money, sponsorships, coaching, and other pickleball-related business ventures.

Who are the richest Pickleball Players?

Benjamin Johns is one of the top-ranked players globally in men’s doubles, men’s singles, and mixed doubles. His doubles partner is his brother, Collin Johns. Johns is from Gaithersburg, Maryland, and he studied Materials Science and Engineering at the University of Maryland in the hopes of starting his own pickleball paddle company. Johns was the 2019 Pickleball Rocks Player of the Year and has won more than fifty gold medals. He was the first male athlete to Triple Crown (win all three titles) at a major and has since won three Triple Crowns. He also was the first pickleball player to be offered an endorsement deal, which he signed in 2019 with Franklin Sports. His total estimated prize money is $146,325.

Tyson McGuffin is from Lake Chelan, Washington, and began playing pickleball in 2015. He played his first tournament after only playing for one month and won the level 4.5 bracket. McGuffin has since been ranked first in men’s singles and third in men’s doubles globally and is a five-time Grand Slam Champion and a four-time National Champion. McGuffin spends half of his free time teaching through his businesses, Tyson McGuffin Signature PB Camps, TM PB Coaching, and The Tyson McGuffin Show Podcast. His total estimated prize money is $84,075.

Riley Newman was born on Whidbey Island, Washington, and played Division I tennis at a college in Seattle University. His mixed doubles partner is fellow pickleball star and sister, Lindsey Newman. Both Riley and Lindsey Newman are certified instructors and offer pickleball clinics and camps. He began playing in 2017 and picked up the sport quickly because of his tennis skills. Newman Triple Crowned in the 2019 Canadian Nationals and has won over 27 medals during his career, many in the mixed division. He recently released the Riley Newman 206 Pickleball Paddle in partnership with GAMMA Sports. He is sponsored by TAKEYA, GAMMA Sports, and Digital Position. His estimated total prize money is $75,450.

Collin Johns is Ben Johns’ older brother, and he began playing pickleball in 2018, rising quickly to number six globally in men’s doubles. He regularly partners with his brother for doubles matches, and together, they have won 14 professional titles thus far. He attributes his quick success to his background in tennis, table tennis, baseball, and his younger brother’s coaching. Johns got his first, and so far only, Triple Crown in the U.S. National Clay Court Championships in 2019, has won an array of medals, six of them gold, and has won six Pro Pickleball Association titles to date. Johns is sponsored by the Professional Pickleball Registry and Electrum Pickleball and also is the co-owner and founder of Pickleball 360 and is Co-President of Johns&Johns LLC. His total estimated prize money is $31,500.

Tyler Loong played Division I tennis for Brigham Young University and graduated with both a degree in communications and a newfound love of pickleball. Loong grew up in Highland, Utah, and resides in Salt Lake City, Utah. He began playing pickleball in 2014 and is one of the few professional left-handed pickleball players. His signature shot is the Erne, and he coaches in his spare time. Loong has collected many medals in his lengthy career, including a Triple Crown at the 2018 Canadian Open. He is sponsored by Vulcan Sporting Goods, ASEA, BUILT, Bucked Up Fitness, Snapsports Athletic Surfaces, Zelius Insoles, ACACIA Sports, and Player’s. Like many other professional pickleball players, he also runs his own blog. His total estimated prize money is $21,750.

Jocelyn ‘Jay’ Devilliers is among the best in the sport in all three divisions and has risen as high as ranking number five globally. Born in Montevrain, France, he is often referred to as the Flying Frenchman, and he is known for his fiery demeanor. He joined the men’s tennis team at Wichita State University in 2013 and began playing pickleball in 2019, using his tennis skills to dominate in tournaments. Devilliers is an ambassador with the French Pickleball Federation and he dedicates a portion of his time to teaching and spreading his enthusiasm for pickleball. His sponsors include the global pickleball rating system, DUPR, and pickleball gear retailer, Vulcan. His total estimated prize money is $19,650.

Zane Navratil played tennis before transitioning to pickleball full-time in 2020. Navratil also achieved Academic All-American status and he earned his Master’s Degree in Accounting from the University of Wisconsin. In 2021 alone, Navratil has won over twenty medals in professional tournaments. Navratil teaches pickleball clinics nationwide in partnership with APP Academy and is a certified coach. He is sponsored by Franklin Pickleball, a pickleball gear company; Therabody, a wellness technology company; DUPR, a global rating system; and Wilson, which sells various pickleball products. Navratil also has a blog about pickleball on The Dink, a pickleball-centered website.

Kyle Yates’ pickleball career began when he was a teenager in Fort Myers, Florida, when his uncle introduced him to the sport. At the USAPA National Tournament, his first professional tournament, he won gold in the men’s doubles on the very first day. Since then, he has focused on his professional pickleball career, suspending his education at the University of Florida. He has multiple sponsorships and brand deals and is the co-owner of PB1965, a private label that designs top-of-the-line pickleball accessories and apparel. He also plans to open and teach at Yates Pickleball Academy, his own pickleball facility.

Frank Anthony Davis, or ‘FAD,’ has been ranked as high as number six globally. Davis grew up in Southern New Jersey and began playing pickleball in 2013. Davis holds several gold medals, a Triple Crown, and finished ranked number three globally in 2019. He is currently sponsored by NIUPIPO, a pickleball equipment company, and Lock Laces, a no-tie shoelace company. Davis runs his own blog and podcast, and he co-founded PickleballByPros.com, a site with accessible training videos and content for players at all levels. Davis also participates in special events, such as the South Jersey Dream Center’s Pickleball Against Poverty Tournament, in an effort to spread enthusiasm and awareness about pickleball.

James ‘JW’ Johnson has risen quickly in professional pickleball. The Delray Beach, Florida, native comes from a family of pickleball stars, with his mom dominating the senior division and his younger sister rapidly rising in the women’s division. At only 19, James Johnson was the youngest pickleball professional to win the men’s singles title and has been ranked number two globally in men’s singles. Johnson recently claimed his first Triple Crown and has plans to one day have more Triple Crowns than his mom. Johnson is currently sponsored by The Yowbow, and while he does not have any business ventures yet, he is sure to launch some as his career continues to grow.

Who is the richest pickleball player in the world?

The richest pickleball player in the world is Benjamin Johns. Thanks to his more than fifty gold medal wins and his multiple Triple Crown victories, he has the highest estimated earnings of any pickleball player at $146,325. In addition to these tournament winnings, Johns also entered into a lucrative sponsorship with Franklin Sports in 2019.