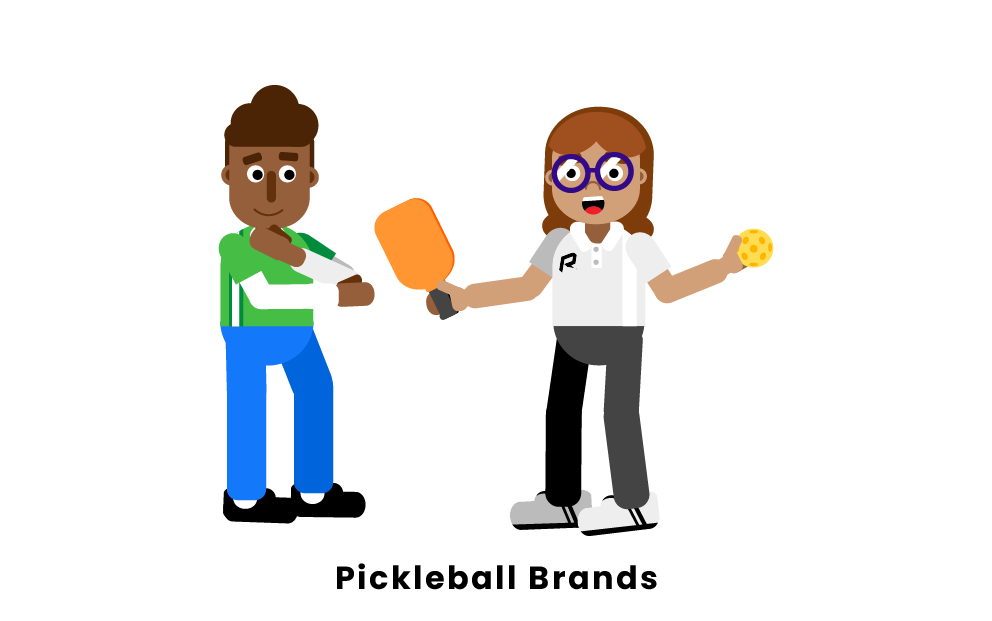 What are the best Pickleball Brands?

Niupipo is one of the most popular pickleball brands and is the best-selling pickleball brand on Amazon. They have been in business since 2012 and focus on providing affordable pickleball paddles and equipment to help new players get into the game. Niupipo is known for its beginner and intermediate paddles but has also begun to branch out into professional-level paddles. They recently designed the Niupipo Explorer, their first professional performance paddle, with Frank Anthony Davis, who they sponsor. All of their paddles are USAPA-approved, sanctioned for tournament play, and touted as being able to withstand whatever challenges may arise on the court.

PB1965 was founded in 2019 by professional pickleball player Kyle Yates and pickleball enthusiast Randy Sussman. PB1965 may have a lot of competition in the athletic apparel market, but its focus on pickleball sets them apart from the rest. PB1965 features apparel solely for pickleball that is focused on maximum comfort and functionality for professional pickleball athletes and casual enthusiasts alike. On top of being the official clothing brand for Yates, PB1965 is also the official clothing brand for Eva Welsher, a superstar on the pickleball scene. Their high-quality apparel is reasonably priced and fashionable with a wide range of sizes making their apparel, and pickleball as a whole, more accessible to people of all sizes.

Franklin Sports was the first sports company to offer a professional player, Ben Johns, an endorsement deal. Johns signed with them in 2019, and Franklin introduced its Ben Johns Signature Pickleball Paddle in September of that same year. Franklin sells everything a player could possibly need on their website, including net sets and bags. However, they sell products for all sports, so their selection of pickleball gear is less specialized than other brands that focus specifically on pickleball. Franklin has been around since 1946 and is now a global company that has partnerships with most professional sporting organizations.

DUPR (Dreamland Universal Pickleball Ratings) is a global rating system for pickleball players of all levels. DUPR is trusted by pickleball tours, professionals, and clubs globally to provide accurate ratings based on the margin of victory, type of result, and outcome. Their community is inclusive and ranges from professionals ranked number one globally to those just starting and is accessible, user-friendly, and universal. DUPR allows amateurs to have a rating without having to play in professional tournaments, allowing those players to gauge their progress while competing in lower-level tournaments. They currently sponsor Ben Johns, Dekel Bar, and Zane Navratil, among other professional pickleball players.

GAMMA Sports serves tennis and pickleball athletes and produces grips, hoppers, and nets, along with the usual pickleball equipment and apparel. GAMMA has been selling tennis equipment since the late 1900s, but it got into the pickleball game in 2014 when it noticed the emerging market of pickleball enthusiasts and professionals. GAMMA is committed to always improving its knowledge of composites, manufacturing, and plastics in order to provide customers with the best pickleball paddles. In 2020, GAMMA launched Never Stop Playing Pickleball camps for intermediate and advanced players to hone their skills with coaching from professional pickleball players. They currently sponsor Riley Newman, Paul Olin, and several other professional pickleball players.

Vulcan Sporting Goods serves baseball and pickleball athletes, though they have more pickleball products, and their blog is focused on all things pickleball. Vulcan was founded in 2015 and aims to combine style and innovation to create amazing ball sports products. Located at Vulcan headquarters is Vulcan Pickleball Park, four outdoor lighted state-of-the-art pickleball courts that are free and open every day from 7:30 am to 10:30 pm to members of the public. The courts are also used by tourists, employees, and pickleball clubs and are occasionally used for Vulcan IQ Pickleball clinic sessions, exhibitions, invitationals, and clinics. They currently sponsor Tyler Loong and Jocelyn ‘Jay’ Devilliers.

Wilson Sporting Goods is the oldest sporting goods company on this list, but its lack of specialization in pickleball is why it is last on the list. It’s still usually a go-to brand for pickleball beginners who are attracted by its familiarity and its long history of excellence in the sporting goods industry. Wilson was founded in 1913 and was originally known as the Ashland Manufacturing Company, but it acquired its iconic name a few years later in 1916. Wilson sells the Tru 32, a unique pickleball developed in their labs in 2018 with the intent of achieving game-changing performance. Wilson currently sponsors professional pickleball player Zane Navratil.

ONIX is a pickleball industry leader in developing paddles, balls, accessories, and apparel. Founded in 2005, it is also one of the older brands in the relatively young pickleball world. ONIX takes pride in developing equipment tailored to each pickleball player’s specific game. They currently sponsor dozens of professional pickleball players and coaches, including Steve Cole, Byron Freso, KaSandra Gehrke, and Lucy Kovalova.

Paddletek is a pickleball brand that primarily specializes in paddles but also produces other gear and apparel. Paddletek revolutionized the honeycomb core in paddles after being founded in 2010. They place emphasis on growing the game by sponsoring players and tournaments and are consistently proving themselves to be a leader in innovation in the pickleball world. They sponsor some of the top professional pickleball players in the world, including Kyle Yates, Leigh Waters, and Catherine Parenteau.

PROLITE Sports was founded in 1984 under the name ULTRA-LITE Paddle Co., making it one of the oldest pickleball brands still around today. They introduced the first composite pickleball racquet to the market, revolutionizing the way pickleball paddles are made. The company’s CEO and President, Neil Freidenberg, is a star pickleball player himself, with a 5.0 rating. PROLITE Sports produces high-quality paddles, grips, apparel, and accessories for all ages and skill levels.

What are the best pickleball brands?

The best pickleball brands are Niupipo and Selkirk Sports. Since its 2012 inception, Niupipo has sold the most affordable and high-quality pickleball equipment for beginners, intermediate players, and even professional pickleball athletes. Similarly, Selkirk Sports is a fast-growing pickleball empire that has been promoting pickleball since it opened shop in 2014.

What is the Niupipo pickleball paddle?

Niupipo is arguably the greatest producer of pickleball equipment, becoming especially known for its unique and affordable series of pickleball paddles. A Nipupipo pickleball paddle is renowned for its patented polypropylene honeycomb core, high-quality grip, and strong edge guard. There are a variety of options based on level of play, and they range from around $35 to over $100.

What are good tennis and pickleball brands?

Unsurprisingly, many of the best pickleball brands were first known for their work creating tennis equipment. The greatest purveyor of both tennis and pickleball is GAMMA Sports. GAMMA Sports began selling high-quality tennis equipment in the late 1900s but branched out into designing pickleball gear in 2014. Almost ten years later, they are highly respected in both sports and are represented by many ambassador athletes.