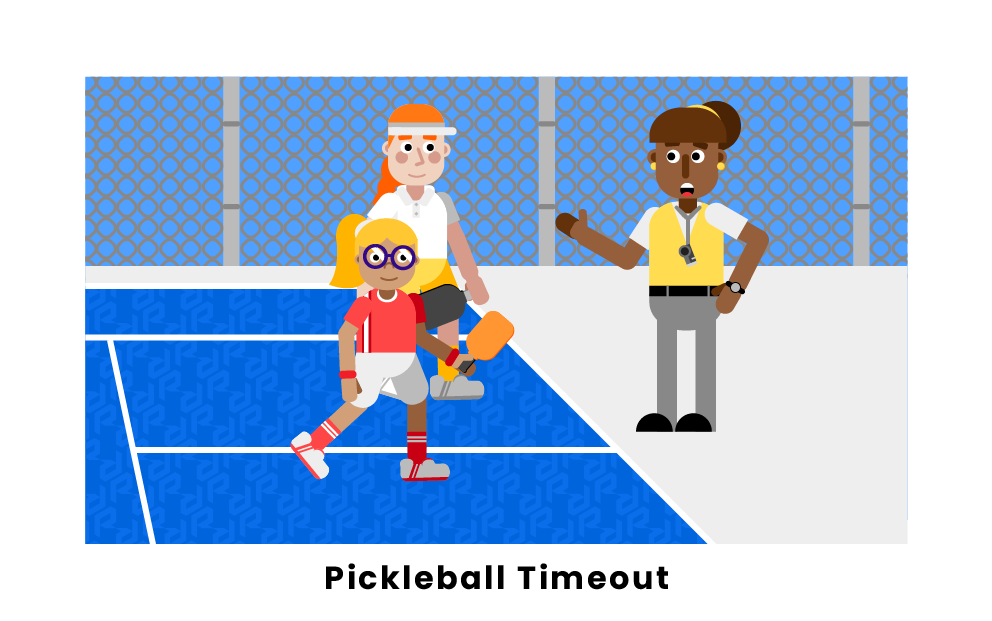 Timeouts are a common feature of many types of sporting events, but what are the specific rules regarding timeouts in pickleball? Pickleball novices may be unaware of the unique requirements for a timeout in their sport, so here we will take a look at the different types of timeouts in pickleball, how long they are, and when it is legal and illegal to call for a timeout.

The most common form of timeout in pickleball is known as a “standard timeout” and is meant to give both teams a brief period to strategize and reevaluate gameplay during a game. As detailed in Rule 10 of the Rules of Pickleball, each pickleball team on the court receives a set amount of timeouts per game based upon the number of points being scored to in that game. For games scored to 11 or 15 points, each team receives two timeouts, while for games scored to 21 points, teams receive three timeouts each.

In pickleball, a regular timeout lasts one minute, with the referee calling out when fifteen seconds remain on the clock and then calling out “time in” when the timeout ends.

Timeouts can be ended early if both teams are ready to resume play before time elapses. Regular timeouts must be called before the beginning of the next serve and cannot be called prior to the beginning of a match, though they can be used between two games in a multi-game match.

According to pickleball rules, if a team calls a timeout prior to the next serve but has no timeouts remaining, there is no penalty awarded. The rules for timeouts in pickleball state that it is considered acceptable for players to briefly towel off or get a drink between rallies without being charged a timeout, so long as this does not excessively impact the continuous play of the game.

The second form of timeout in pickleball is a medical timeout, which is called whenever a player on the court sustains an injury or has a medical emergency. If a medical timeout is called for by one team, Rule 10 states that the immediate procedure is to call for whatever on-site medical staff are available to the players or to contact the Tournament Director in the event that there are no medical personnel. Once either the medical team or the Director arrives, the referee will begin a 15-minute timer to allow the authorities to assess the situation, offer first aid, or perform other necessary procedures.

Players who require a medical timeout for an issue that is determined to be a valid complaint but who can also potentially return to the game are given 15 minutes to rest and recover, after which they must resume playing. If a player’s condition makes it impossible for them to resume play, Rule 10 dictates that the match ends as a retirement, with the team who called the timeout forfeiting the match. If medical personnel determine that there is no medical issue, the team will lose one of their standard timeouts (or receive a foul if they have no timeouts left), and they will also be given a warning. Each player in a game has access to only one medical timeout and will lose that timeout whenever they call for it, even if they are determined not to have a medical issue. As with regular timeouts, medical timeouts cannot be called before the start of a match.

A final consideration regarding medical timeouts relates to the potential of a bleeding player. In the event that one player is bleeding, a referee timeout will be called and will last as long as is necessary for the bleeding to be controlled or stopped and for any blood to be cleaned off of the court and the player’s clothing or equipment.

Timeouts Between Games and Matches

In pickleball tournaments where matches consist of multiple games, Rule 10 states that there is to be a set period of time for teams to rest and prepare between the games of a match. This period is set at two minutes, but either team can request that one or both of their timeouts for the upcoming game be used to extend that time beyond two minutes. If the team that makes this request returns to the court before one or both of their standard timeouts are used to extend the period between games, they are allowed to keep that timeout for the game itself.

In tournaments where teams play multiple matches, Rule 10 sets a standard time gap of 10 minutes between the end of one match and the start of another, though matches are allowed to begin prior to the end of that 10 minutes if both teams are ready to play. In certain tournaments with winners’ and losers’ brackets, an additional timeout rule exists if the winner of the losers’ bracket defeats the winner of the winners’ bracket, in which case a tie-breaker match is necessary. This rule states that there must be a 10-minute timeout between the championship match and the tie-breaker match.

Additional rules for timeouts in pickleball discuss timeouts that may be called for extenuating circumstances, which are scenarios in which the referee can issue a timeout that does not impact either team’s number of remaining timeouts as a result of some necessary factor. Situations where referee timeouts can be called include possible medical situations such as potential heat exhaustion, when a clearly-injured player is incapable of or refuses to call a medical timeout, or when there is bleeding on the court. Referees can also call a timeout due to the presence of foreign objects or substances on the court, such as debris or fluids like water, which must be cleaned up. Referees can also temporarily suspend a game due to situations such as inclement weather, after which the game resumes where it left off.

The rules for timeouts in pickleball are fairly straightforward and exist to ensure that the flow of the game proceeds smoothly. As with any sport, it is important that pickleball teams use their allotted timeouts wisely and as a means of enhancing their gameplay in order to help everyone enjoy their experience as much as possible.