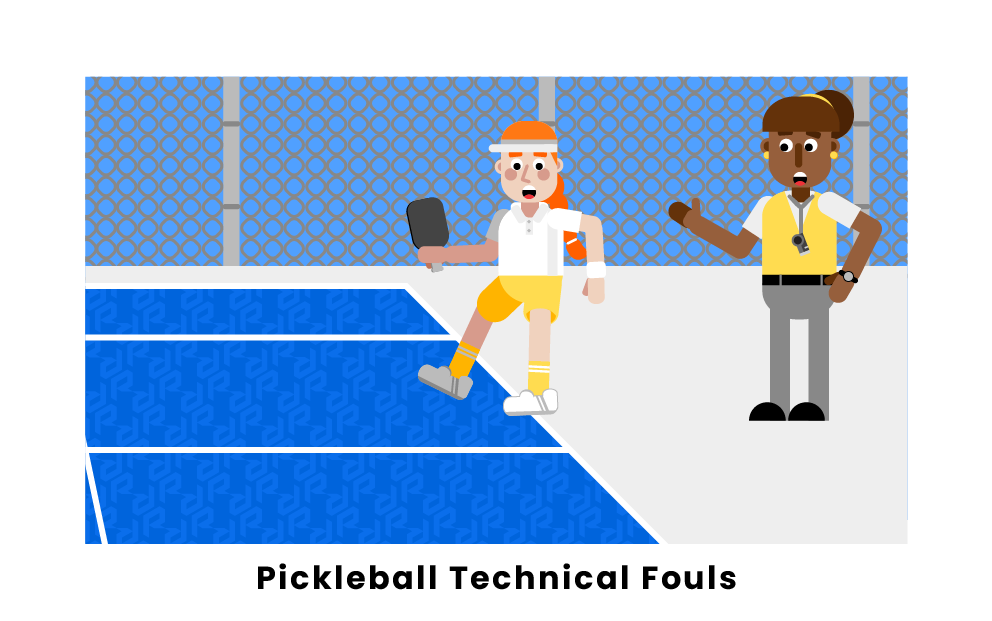 Like many sports, pickleball has a category of technical fouls. If the referee assesses that there has indeed been a rule or behavioral violation, a point is removed from the score of the offending team or added to the score of the opposing side.

As clearly stated in the official pickleball rulebook, there are seven instances of technical fouls. These actions or behaviors result in a technical foul without a technical warning being issued beforehand. The first instance is aggressively or recklessly throwing one’s paddle in frustration or anger with utter disregard for the consequences. The second instance is a player using what the referee deems as extremely objectionable language or profanity for any reason. The third instance is making a threat or challenge to any person on the court. The fourth is when a referee’s interpretation of a rule is incorrectly challenged when no time-out is available. The fifth instance is when a player or team conducts what the referee considers extremely unsportsmanlike behavior. The sixth instance is requesting a medical time-out without a valid medical reason, and no time-outs are remaining. The last and most severe instance is when a player deliberately throws or hits a ball that is not in play in a manner that shows a negligent disregard for the consequences. For the last instance to be considered a technical foul, the ball must inadvertently strike a person.

Before a technical foul is called, a referee is capable of issuing a single verbal or technical warning to a player or team. A warning can be given for the following actions or behaviors: objectionable language targeted at another person on the court, profanity for any reason, aggressive arguing, ball abuse, unnecessary disruption of play time, repeatedly appealing line calls, inappropriate coaching, requesting a medical time-out without a valid medical condition, and any conduct perceived by the referee to be considered minor unsportsmanlike behavior.

There is a simple appeal process for the call of a technical foul. Any player may appeal a line call specifically. Possibly taking into account any present line judges or players, a referee will then make a call if the ball was clearly seen in or out of bounds. If they are unable to make a new distinction, the original call and its effects will remain.