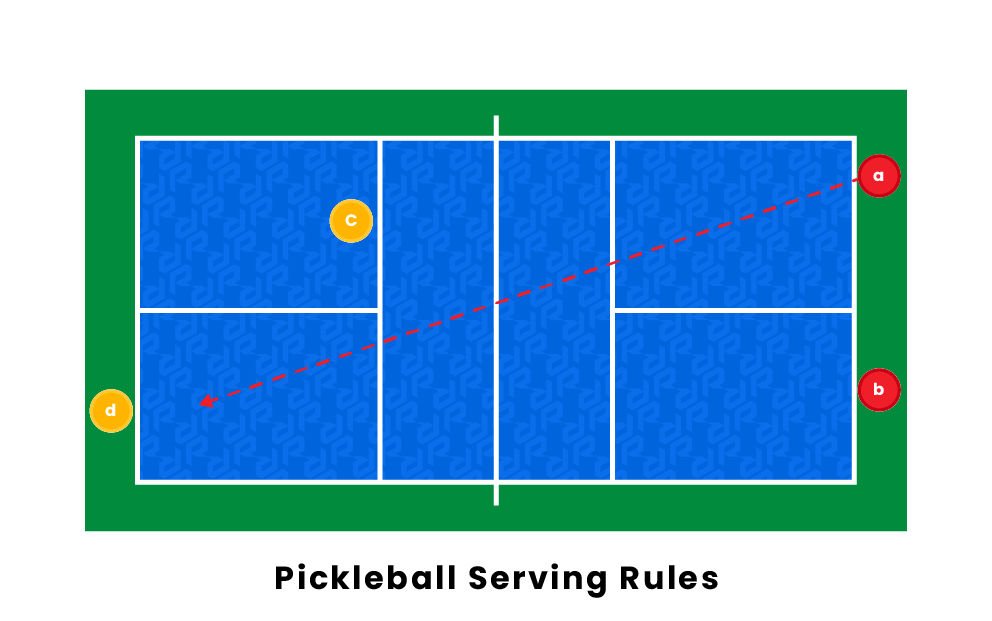 The first step in starting a game in pickleball is to serve, but what are the pickleball serving rules? You need to know how to pick a server, where the server must stand, and how to serve the ball properly to start a game.

To start a game of pickleball, you need to decide who will serve first. You can decide by either flipping a coin, guessing a number, or any other method of equal chance. Whoever wins gets to decide if they want to serve the ball or receive the ball first. Whoever loses gets to choose which end of the court they would like to start on.

Where do you serve?

At the beginning of a game, the server starts serving from the right side of the court since the score is at 0. They must serve from behind the baseline. The server should not cross the service line until the ball is in play.

How do you serve the ball?

There is a unique technique required to serve the ball in pickleball. To do so, you must use the volley serve or drop serve. This means the server can only use one hand to release the ball. The other hand will be hitting the ball with the pickleball paddle upwards using an underhand motion. You can use either your forehand or backhand to serve. You cannot bounce or throw the ball before serving; it must be dropped from one hand and hit with the other.

For doubles, serving order depends on the score. The player serves from the left of the court when the sum of the total score is odd and from the right when it is even. If the team begins the game with the serve, the player on the right will start since the score is 0. This player will continue to serve until they fault. When serving, the player will switch sides after every point. This means they will serve on the right first and then switch to the left side for the next serve. Once the serving team faults, the service is given to the partner. Once the serving team faults while the second team member is serving, the serve will be granted to the opposition.

For example, the ball must be served to the player diagonally from the server, and it must land in the corresponding diagonal service court. If it lands in the non-volley zone, more commonly known as the kitchen, or outside of the court’s boundaries, the serve is faulted and turned over to the opponent. Receiving players can also commit a fault if they hit the ball before it bounces on their side. For the serve to be completed, the ball must bounce in the diagonal service court before the opponent can return the ball.

If a serve is not completed because the ball is hit into the net, the serve is lost and turned over to the opponent. Hitting the ball into the net after the serve and it failing to go into the opponent’s court is also a fault that can result in a point for the other team or a loss of serve. Another common fault is when the player hits the ball under the net or between the net and the net post. This is a fault because the ball can only be hit above the net within the lines of the court.