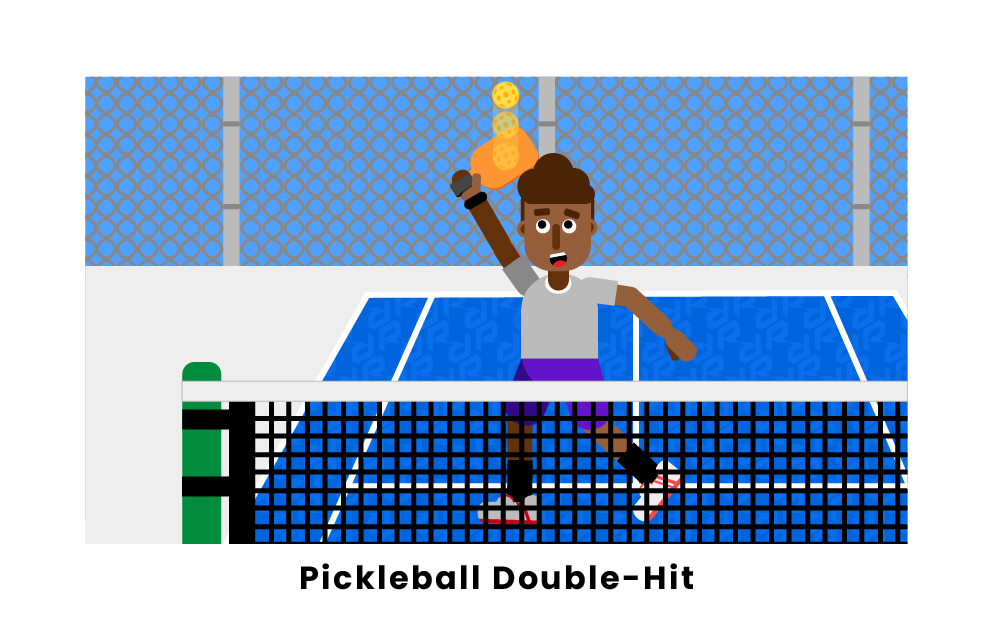 Many pickleball players often wonder what the rules are regarding double-hits, which are defined as an action that causes the ball to be struck twice by one or more players. There are specific rules in pickleball that deal with double-hits, and here, we will take an in-depth look at them, examining the rules and consequences for a double-hit.

Definition of a Double-Hit

According to Section 3.A.8 of the Rules of Pickleball, a double-hit is defined as any time a ball is hit twice by one or more players during a return. There are various scenarios in which a double-hit can occur. For instance, a player may be hitting a groundstroke that accidentally results in the ball being struck twice by the paddle, or may volley the ball and accidentally cause it to bounce twice against the paddle in quick succession. Additionally, the ball may hit a player’s hand and then hit their paddle as part of one stroke. A double-hit may also occur if the ball strikes one portion of the paddle, and then in the process of the paddle’s swing, a second part strikes the ball in a continuous motion. Double-hits can also occur if one player accidentally deflects the ball off of their paddle and then either hits it again or allows their teammate to hit it. Another form of double-hit may occur if one player returns or serves the ball short of the net, and their teammate jumps in to hit the ball over the net.

Rules Regarding a Double-Hit

In pickleball, there are specific rules regarding double-hits. In technical terms, a double-hit can be legal in pickleball, but only if it meets certain criteria. As detailed in Rule 11A of the Rules of Pickleball, a double-hit can only be counted as legal if it meets four specific requirements. Firstly, the double-hit must be unintentional, meaning that it cannot be the result of a deliberate strategy by the player or players to hit the ball twice in order to gain an advantage. Secondly, the double-hit must be continuous, meaning that the two contacts between the paddle and the ball must come one after the other, as a part of the same striking action, rather than two separate strikes.

The third criteria that a double-hit must follow is that it must be a stroke made in one single direction. This means that the double-hit cannot cause the ball to initially move in one direction, and then cause it to move in a second direction as the result of a stroke from a different angle. Finally, the fourth criteria that a double-hit must pass is that, in addition to meeting all three of the above criteria, it must be a double-hit performed by only one player. Any double-hit that is made by multiple players is automatically illegal under the Rules of Pickleball.

If a double-hit in pickleball is determined to fail any of these criteria, meaning that it is determined to be intentional, not continuous, multi-directional, hit by two players, or even all of the above, a fault will be issued to the offending player or players. If the double-hit is committed by the serving team, the resulting fault will be a loss of serve. Meanwhile, if it is committed by the non-serving team, the rally and point is won by the serving team.

The Rules of Pickleball are extremely specific in regards to what sorts of double-hits are and are not allowed in play of the game. These rules strive to make certain that no team in pickleball gains an advantage over the other as a result of hitting the ball twice and help to make sure that the game of pickleball is as challenging and fun for all participants as possible.