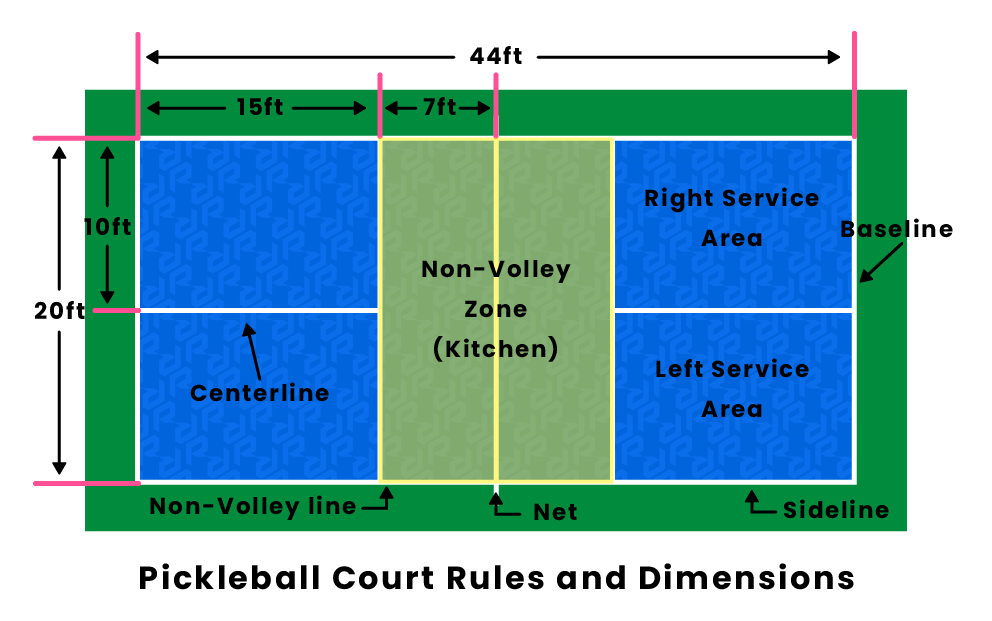 Pickleball is played on a unique type of court that can be either outdoor or indoor and has very strict dimensions laid out by the Rules of Pickleball. Though pickleball is visually similar to other racquet sports, like tennis, there are a number of differences between the two, among them the size and dimensions of the pickleball court. Here, we will take a look at the layout and size of a pickleball court.

How Large is a Pickleball Court?

A standard pickleball court has its own unique size and dimensions that set it apart from other courts used in racquet sports. These dimensions are discussed in Section 2 of the Pickleball Rulebook, laying out the measurements for the length and width of the court. According to the Rulebook, a standard pickleball court measures 20 feet in width (6.10 meters) and 44 feet in length (13.41 meters). These measurements include the width of the boundary lines that surround the playing field of the court.

The Pickleball Rulebook also states that the boundary lines surrounding the court, which denote which spaces are in and out-of-bounds, must be two inches wide, in addition to being a contrasting color to the surface of the court. Outside of the playing court, the space surrounding the boundary lines is recommended to be at least 30 feet wide and 60 feet long to give the players ample room to move about.

What is the Layout of a Pickleball Court?

In addition to the basic dimensions of length and width, a pickleball court has additional measurement requirements for other subdivisions of the court itself, namely the two service courts and the Non-Volley Zone. On either side of the pickleball net, the first zone of play is the Non-Volley Zone, a rectangular area of the court directly abutting the net, which measures 22 feet wide and 14 feet long on both sides of the net. This Non-Volley Zone is the space given for the pickleball to bounce on each volley over the net and is further elaborated on in Section 9 of the Pickleball Rulebook.

Are There Other Types of Pickleball Courts?

The unique dimensions of a pickleball court exist to facilitate the game and provide standard measurements for its players. These measurements enhance the fun of the game and ensure consistency so that each player or team of players on the court is equally-matched.