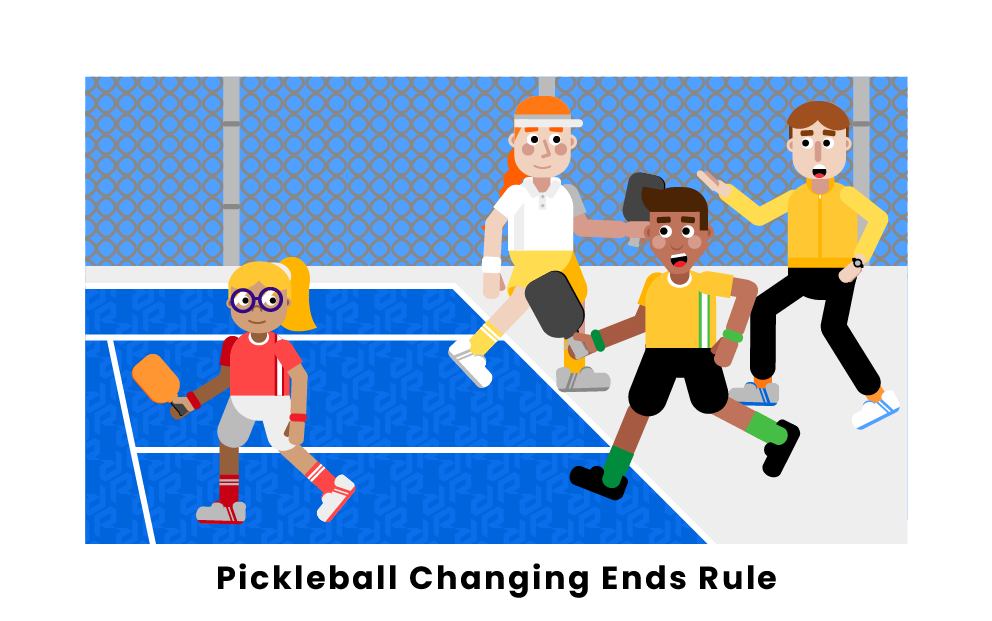 Pickleball is a sport growing rapidly in popularity around the world. Here we will discuss an important element of the game, the changing ends rule. Pickleball matches are generally played in best of three or best of five-game sets. These games present several opportunities for this rule to be put on display. The change of ends rule is listed as 5.B in the USA Pickleball Official Rulebook.

In pickleball, matches can be played with three or five games, and each game can be scored differently. For example, some pickleball games are played to just 11 points, while others go to 15 points, and some can even be played to 21 points. Depending on how many points the game is being played to, there will be a different point at which the rule dictates changing ends. For example, in a game being played to 11 points, the teams will switch ends when the first team scores six points. At that point, the team holding serve maintains serve, and the teams have a maximum of one minute to change ends. When there are 15 seconds left in the break, the referee will announce the resuming of the game with a time-in call. If the game is being played to 15 points, then when the first team reaches eight points, they switch ends, with the team holding serve retaining their serve. This method holds true for games being played to 21 points, but the end change occurs when the first team reaches 11 points in these games.

Another instance in pickleball where teams switch ends is at the end of each game in the match. At this point, the two teams are given a maximum of two minutes to change ends, and the initial service of the game alternates from one team to the other. Before the beginning of the next game, the referee will give a 15-second announcement before calling the start of the next game. Therefore, in a pickleball match, teams can switch sides a total of five times in a three-game match or nine times in a five-game match. The major difference between in-game end changes and completion of game end changes is that during the game, the serve stays with whichever team held it. Meanwhile, completion of game end changes brings about a change of serve to whichever team received the serve in the previous game.